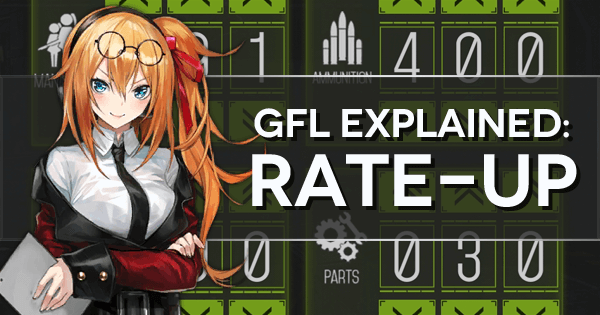 GFL Explained is part of a new series on Gamepress where you can find detailed breakdowns of various important game terminology and mechanics. If you have any suggestions for the next article’s topic, please join the Community Discord and share your ideas!

The term “rate-up” shows up often in social games with a chance-based gacha system, and Girls’ Frontline is no exception; in this game, a production rate-up refers to a period of time during which craft rates are noticeably increased, usually affecting a specific type of production or set of units.

Official GFL announcements often advertise the in-game rate-up events. At the time of writing, GFL EN’s next rate-up according to the Monthly Roadmap is just around the corner, with maintenance notes confirming that the event will run between Sep. 24th - Oct. 1st, 2019.

Exactly what rate goes up, anyway?

There are two types of production rate-up events: one that involves all four types of factory production (including heavy) on a rotating schedule, and one that is tied specifically to newly-released T-Dolls.

For simplicity’s sake, this article will refer to them as general rate-up and targeted rate-up respectively.

Since GFL EN’s release, general rate-up has occurred roughly three times a year. The official promotional image for the January 2020's General Rate-Up is included below for reference: 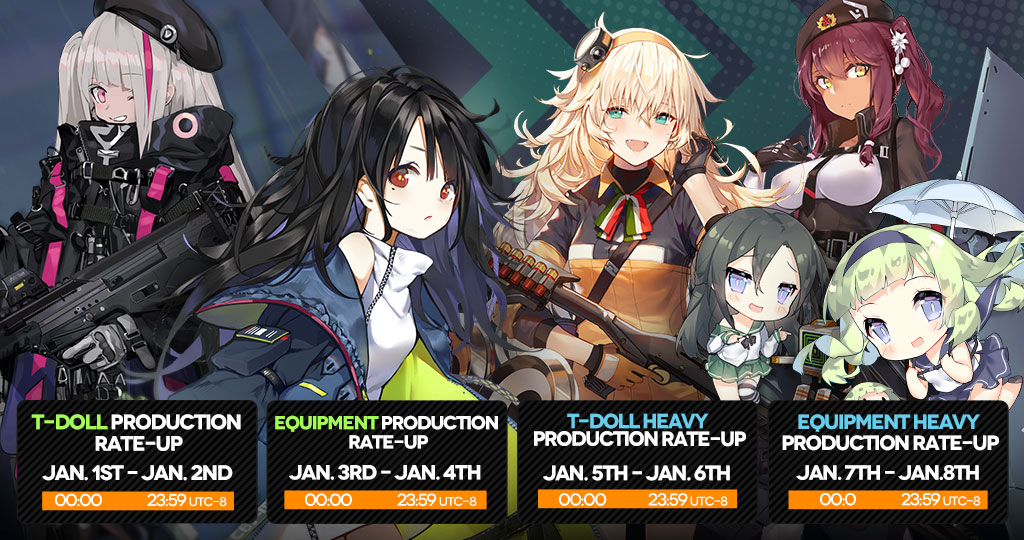 General rate-up events run for 8 consecutive days, broken up into 48-hour focus periods that run in the following order:

In other words, this will be the crafting schedule for the January 2020 rate up:

When a new batch of T-Dolls is added to the game, a 2-day targeted rate-up (also known as banner rate-up) usually accompanies their release to help players “target” craft them. Here is the promotion image for EN’s most recent targeted rate-up at the time of writing: 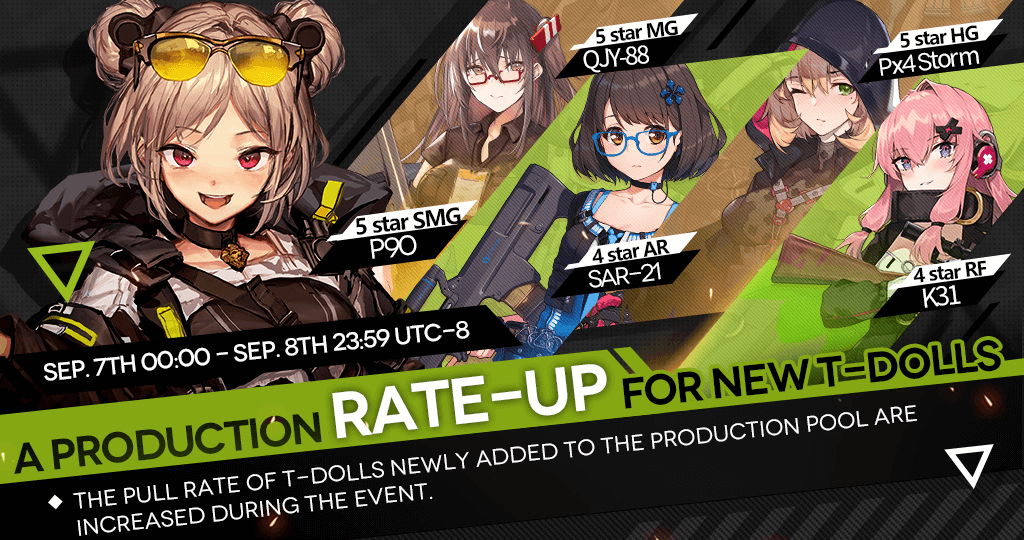 The Girls’ Frontline EN server typically holds targeted rate-up events on the weekend following maintenance, during which the pull rates of the newly-added T-Dolls are significantly increased. As maintenance typically occurs on Tuesday, this leaves a 4-5 day gap for players to save up resources and contracts.

Unlike certain other games that will go unnamed here, GFL rate-ups are significant and actually provide a very noticeable boost to high-rarity doll drops.

Targeted rate-up events seem to have an undocumented mechanic wherein the first craft during rate-up is almost guaranteed to give a banner unit, added very recently to both EN and the foreign servers. Many players were pleasantly surprised to have crafted P90 or ADS on their first pull, only to find out that it happened to everyone else.

While exact rate-up mechanics for non-guaranteed crafts have not been disclosed by the developers, the GFDB database provides a fairly comprehensive dataset for EN server production that can be analyzed to find out exactly how large the boost is. The following table is a summary of how rate-up affected the most popular recipes during the May 2019 anniversary general rate-up, which can be assumed to be similar to other general rate-ups:

Note: Recipes are in Manpower-Ammunition-Ration-Parts. Rates for MG recipes only count the MG T-Dolls and ignore off-class drops.

As the data clearly shows, general standard T-Doll production rate-up is at least a 2x boost to crafting rates, with some recipes getting up to a 150% bonus. Commanders who saved their contracts and resources for this rate-up event will generally derive a lot of value out of it.

As there are so many recipes that it’s impossible to fit all the data into this guide, a table of recommended equipment production recipes will be included here instead.

These recipes are far more effective than in-game recommended recipes, according to data from GFDB. The same recipes are optimal outside of rate-up, although at about half the listed 5★ rate.

The 150-150-150-150 recipe for all random equipment also works, but is not recommended due to its high cost and the RNG nature of its crafting results.

What about Heavy Production?

Heavy Production is extremely expensive and unfortunately is barely improved by rate-up, with measured 5★ rate improvement being around 25% as opposed to the doubling observed for T-Doll and Equipment Rate-Up events.

Redditor /u/thatguyinthebox measured the effect of general rate-ups on Heavy Production with GFDB’s crafting statistics and found that they are barely affected compared to baseline values, making it substantially less attractive than regular Production Rate-Ups for players that still need T-Dolls or Equipment from them.

1/1/2020 note: The original Reddit thread contains an error where the fairy drop rate from Tier 1 Heavy Equipment Production was noted as 20.494% as opposed to the GFDB record of 26.918%.

The silver lining of this finding is that players don’t have to feel bad about spending all of their resources on standard T-Doll and standard Equipment production rate-ups; because heavy production is not improved much by rate-up, it is far more optimal to go for the standard rate-ups (in terms of pure resource efficiency) as long as there are still some desirable production results.

Is there an in-game indicator for rate-up? 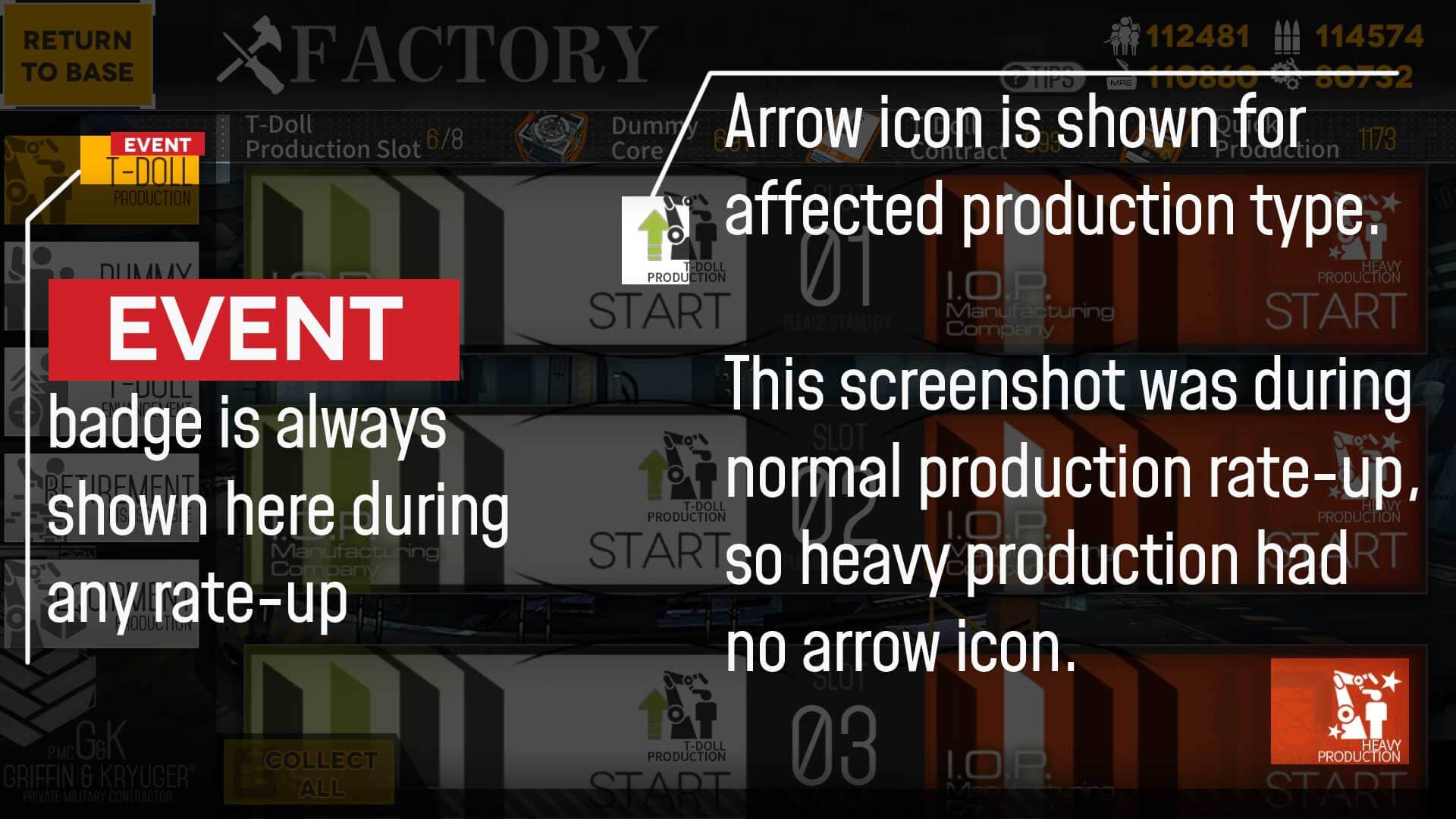 Should I start saving resources?

Generally, rate-ups are announced at least a week in advance. Players who still need a lot of things from production are advised to save as many contracts as possible, as well as enough resources to consume all contracts. 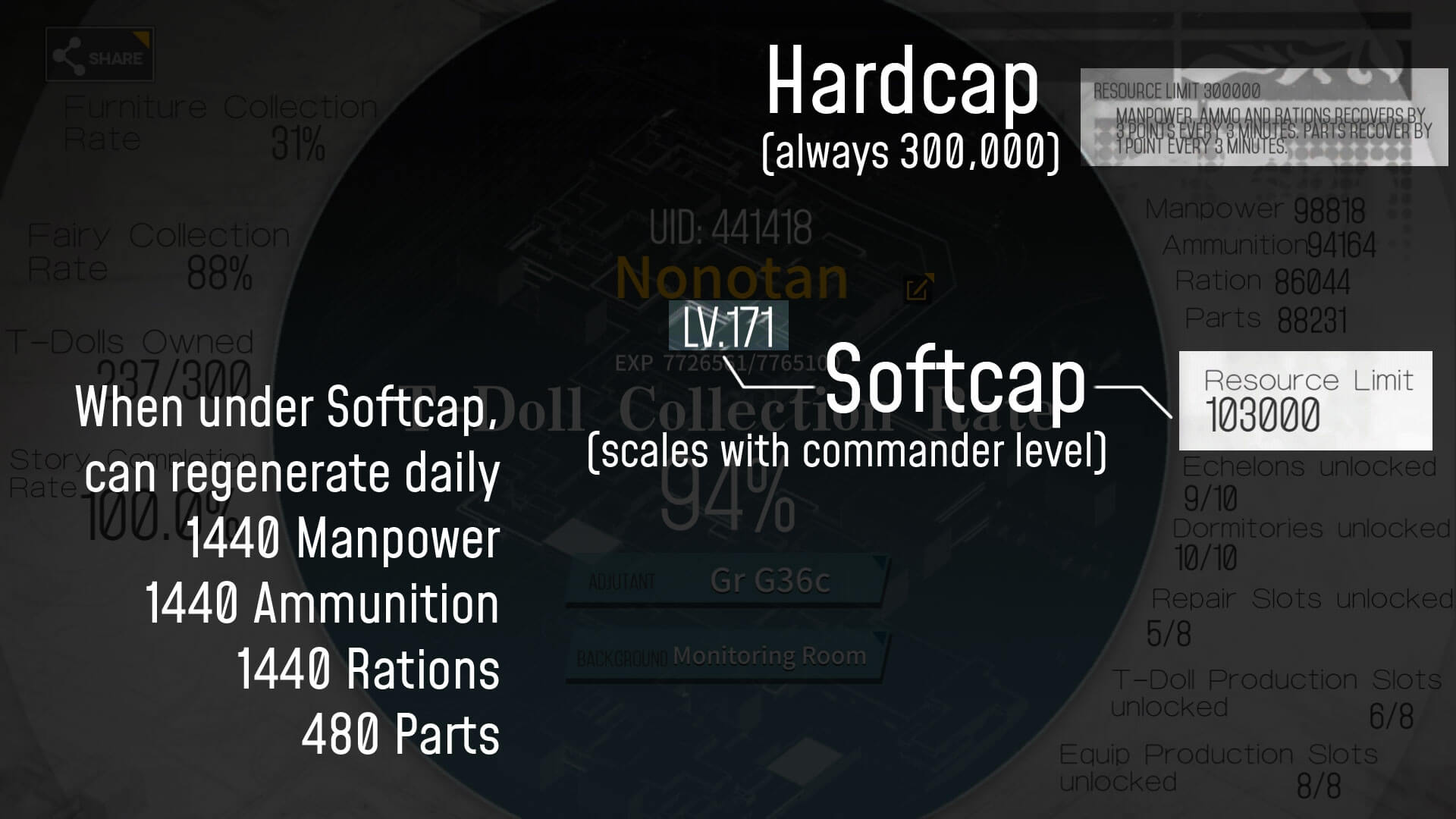 Veteran players with a high softcap and plenty of contracts may instead opt to walk into rate-up with softcap resources, choosing to take advantage of the daily resource regeneration for maximized fairy crafts.

Which Logistics missions should I run?

While a logistics chart/spreadsheet can give general guidelines on which missions are good, it is a disservice to include one and not mention the very nice community-maintained Logistics Calculator that can be accessed here.

By inputting data relevant to your own unlocked chapters, resource needs, logistics cycle duration (how often you can check the game), and Great Success odds, this calculator can output the optimal set of logistics to run, fine-tuned specifically for your situation.

Should I craft T-Dolls or Equipment?

For newer players who have more than enough T-Dolls with decent skillsets to form some basic echelons of each type, crafting enough 5★ equipment to fully outfit two ARSMG teams, one RFHG team, and one MGSG team is a higher priority than crafting more T-Dolls. This means:

Obtaining at least the bare minimum recommended number of equipment is a good idea before spending resources trying for rare T-Dolls that may not be immediately helpful.

Should I craft SGs or Fairies?

In general, fairies offer a much higher return on investment than SGs. While some SGs do perform better than others, the difference is often not worth the massive investment needed to craft a specific 5★ SG.

Fairies, on the other hand, can be used in any echelon unlike SGs who have a very niche role. Having good, high rarity fairies can often unlock possibilities that are not otherwise available, while having good SGs typically only means a lowered repair bill every once in a while.