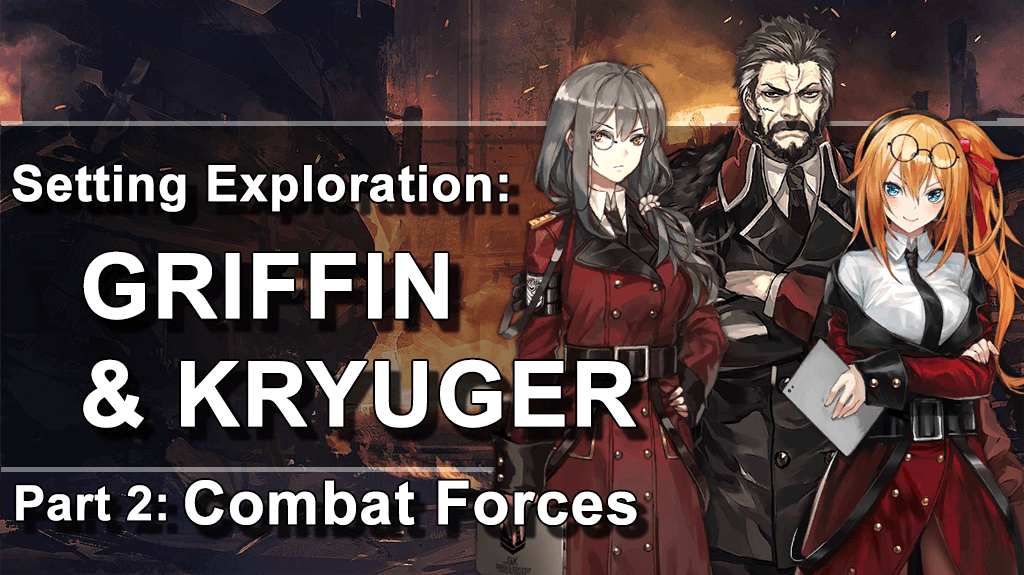 The primary force of G&K is Tactical Dolls (T-dolls). These forces consist of both purpose-made T-Dolls meant for PMC, police, or other armed work, and civilian Autonomous Dolls (A-dolls) converted to T-Dolls via installation of a Fire Control Core (FCC), an Imprint to a pre-WW3 weapon, and appropriate fire and posture control software. An FCC houses all combat related data and software and removal of the FCC effectively demilitarizes a Doll.

T-Dolls are all physically superior to humans, boasting enhanced strength, speed, and cognitive processing. T-Dolls may be outfitted with many advantageous modules or technology such as night vision, infrared optics, ultrasound scanning, vibration detection, and heart beat sensors.

A T-Doll echelon within G&K can consist of anywhere between one and five T-Dolls. A Team Leader is designated by a Commander and a Vice Leader may be chosen by the lead T-Doll if desired. T-Dolls may request to switch teams if there are compatibility issues, but the final verdict lay with a Commander.

For operations with sensitive information, G&K may partially or completely erase the memories of the operation for the T-Dolls involved.

T-Dolls can be designated as ‘Elite’ and the title is not clearly defined in-game. However, one thing is clear: their performance both in and out of combat exceeds other T-Dolls. They are the best the company has to offer.

Known Elite T-Dolls of other affiliation:

Justice must be strong.

Justice is only justice because it is strong.

Therefore, someone who defends justice like me must certainly be strong.

A Command Module can be installed in experienced T-Dolls. This allows them to process battle conditions and devise combat plans at a higher efficiency, as well as directly issue orders to T-Dolls both within and outside of their designated echelon in the event of cut-off communications with the Field Commander. Due to the heavy processing load, not every T-doll is installed with this module, and it is only authorized in select operations.

Many T-Dolls are capable of electronic warfare (EW) at a basic level, even if the Dolls were not originally built for the purpose of EW. However, hacking systems or counter-hacking intrusions incurs a heavy processing load and requires many simultaneous calculations to be carried out. This is where the presence of the EW module comes into play by providing processing and calculation assistance during electronic warfare.

Attempting to hack or being hacked beyond the limitations of a Doll's Digimind could potentially result in a physical burnout or permanent damage to sectors of the Digimind.

A T-Doll is able to form a special sensory bond with a specific weapon suitable to them through the use of Imprinting. A relationship akin to being part of their own body.

Operational efficiency and accuracy are greatly improved when a T-Doll is using their personal weapon. A T-Doll is constantly aware of their weapon's position within physical environments. That said, combat effectiveness can still be limited by physical reasons.

Part of the data package of the Imprint process includes historical data of the weapon as well as any relevant combat data such as Posture Control or Fire Control software. Some T-Dolls may be interested to research into the origins of their weapon further and attribute its history to their own. This information may also influence how a T-Doll acts beyond their preset personality programming and even how they dress themselves.

A wide-area network communication protocol developed originally by 90Wish. It was later modified by 16Lab to be used in Doll operation network interfaces and it is the network protocol that all IOP Dolls now operate on.

The network is similar to peer-to-peer networks and enables Dolls to transmit messages without the assistance of a mainframe or satellite uplink. Dolls can relay orders between each other from a human Commander or new tactical battlefield information directly.

The Zener Protocol makes it possible for teams of T-Dolls to operate autonomously to an extent if communication with a human Commander is unavailable. The efficiency and capability of an autonomous team will depend on the T-Doll with leadership authority.

The Neural Cloud enables T-Dolls to backup memory and combat records, allowing them to gain experience even if destroyed in combat. It has been shown that the more experience and memories a T-Doll is able to retain, the more effective they are, and the more they grow as an individual beyond their programming. However, memory backups can not be done in real-time, and require connection to the designated G&K server. On-site backups can be done through manually written memos, portable storage disks, or compressed video and audio files within a T-Doll’s Digimind. If a T-Doll is destroyed in combat, but their Core is still intact, it may be possible to recover memories even if a backup was not performed, provided the Core’s emergency power supply has not run out before retrieval.

T-Dolls can multiply their combat potential through the use of ‘Dummy Links’. This system enables T-Dolls to control Dolls known as ‘Dummies’ - Frames lacking their own AI programming, but possessing the same combat ability as the ‘Mainframe’. A Dummy’s actions can be controlled in unison or in variance of the Mainframe and control can be transferred to another T-Doll’s authority on the spot.

Any Doll, in general, must comply with any command given by a human. T-Dolls employed by G&K are also installed with additional programming to be loyal to the company. This may influence a T-Dolls behavior to rethink and cease behavior that may negatively affect the company. Attempting to defy an order may result in Digimind structural damage.

A recurring issue with this baseline programming of Dolls is that criminal elements have taken advantage of company T-Dolls on more than one occasion. G&K technicians are aware of the issue, and are working on a solution.

Fairies are an old, abandoned 90Wish drone project revived and modified by Persica for G&K’s usage. She is responsible for developing the base AI and function of each drone, but the AI itself develops its own personality and personal image. They are developed with a command structure based on SF’s OGAS protocol network - a top-down tree shaped network.

Otherwise known as Digimind Upgrade, these modifications are upgrades performed on a T-Doll to increase performance. A proposal must be made by anyone, even a Doll may submit a proposal for another Doll, and submit it to the Commander for approval. What specifically gets upgraded differs for each Doll. T-Dolls may receive a brand new frame altogether, have adjustments made to the Digimind to increase cognition, or receive adjustments and software to use new equipment.

These modifications are a choice and can be declined unless vital to a T-Doll’s continued operation. The upgrades are not free and the payment comes out of a Doll’s personal funds. G&K may sponsor a modification if it is required in order to keep a T-Doll functioning properly.

Heavy Ordnance Corps (HOCs) are a new and highly illegal development made by Persica through research into Sangvis Ferri technology and investment from Havier, the CEO of IOP. HOCs are a team of T-Dolls imprinted to a single heavy weapon. Their new, and unique imprint technology enables them to function as a single cohesive unit while operating the platform.