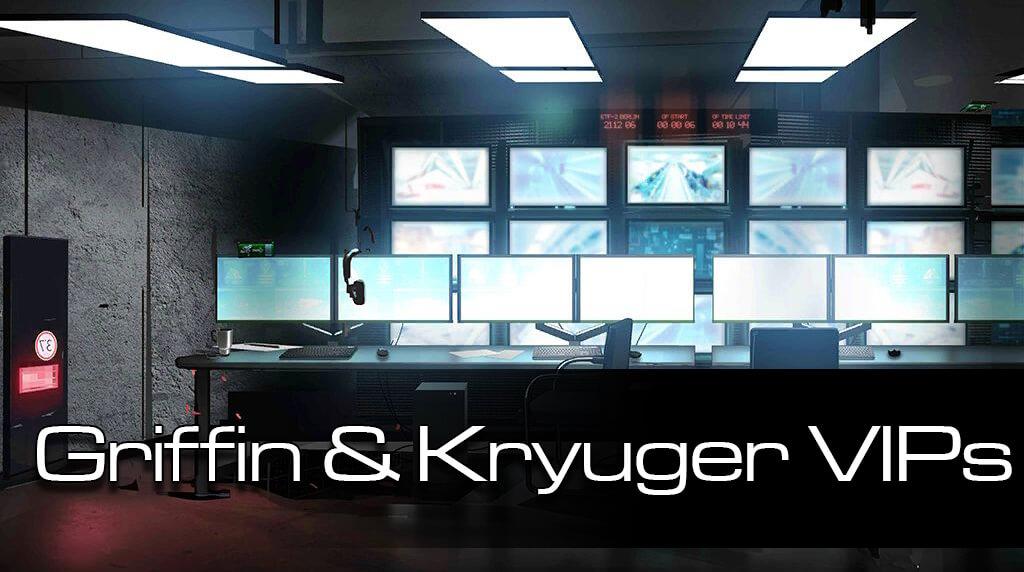 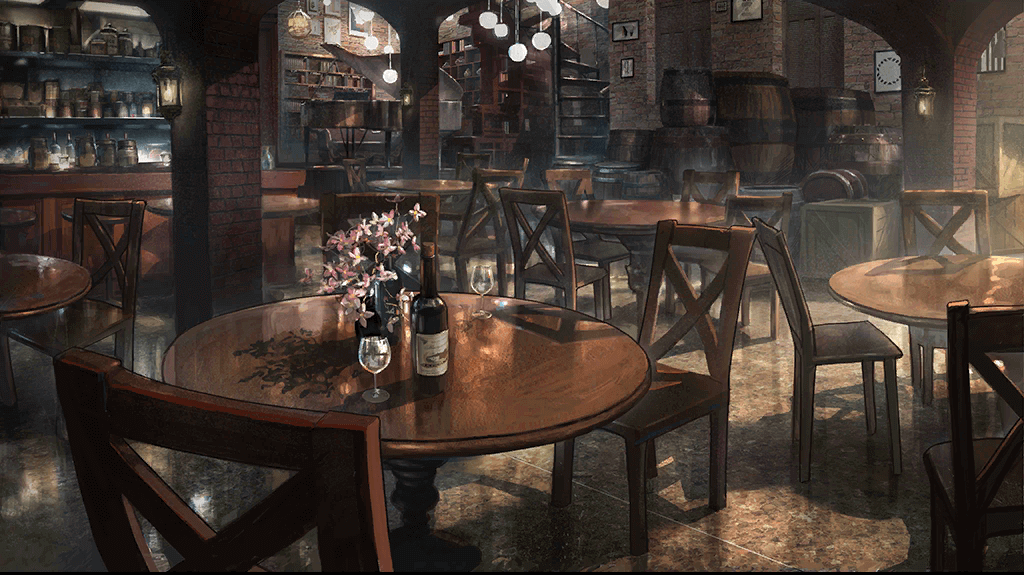 The well-known PMC, Griffin & Kryuger, was established in 2053 following a meeting between the founders in the previous year. In 2052, Griffin Lyons entered the 7.62 Bar in downtown Moscow in search of Berezovich Kryuger, an old friend he’d met years before. Kryuger was a retired Soviet veteran who served in the North African theater. He oversaw a company of troops who operated with Doll robots in the field. After the war, he spent his time in old bars around Moscow with fellow veterans. Thanks to his status within the Ministry of Internal Affairs, he was connected to several powerful people within the Ministry of Defense and the Kremlin. When Griffin approached Kryuger, the two had a short discussion, but Griffin was not there just to pass the time with an old friend. He had an offer that Kryuger couldn’t refuse.

What he offered was a partnership to create a PMC using Doll robots. Griffin had funding from unknown investors, and Kryuger had the connections to the MOD to obtain government contracts. The identity of these investors is not stated, but they seem to be close partners of Griffin. This proposed PMC was expected to be quite fruitful for both parties as PMCs at the time were springing up across Europe. Griffin had the funding needed to back the creation of the company, and Kryuger had the influence needed to bring in recruits and contracts. Under Griffin’s terms, Kryuger gained full authority over their company. Rather than use soldiers, this new private military company would use IOP Dolls to carry out contracts from the Soviet MOD. At the time, Doll robots were strongly opposed by the public and other PMCs, but using female IOP Dolls who look closer to humans could help leverage public opinion. After the two had finished discussing the terms of the contract, Griffin handed a letter to Kryuger. This letter contained the down payment and partnership contract. All Kryuger needed to do was resign from his Ministry position and sign the contract to begin the process of creating the organization we know today.

Before Griffin left, Kryuger asked Griffin why, of all people, that he was chosen for such an endeavor. Griffin revealed that Kryuger was chosen because of his relationship with Persica. Kryuger had been the head of the security team sent to rescue her and Lycoris from 90Wish in the late 2040s. Furthermore, both shared similar ideas of a better world for humanity after the end of WWIII. It is because of Griffin’s allegiance that G&K shares the same motto as the Rossartrists. “The shining beacon in a brave new world.” 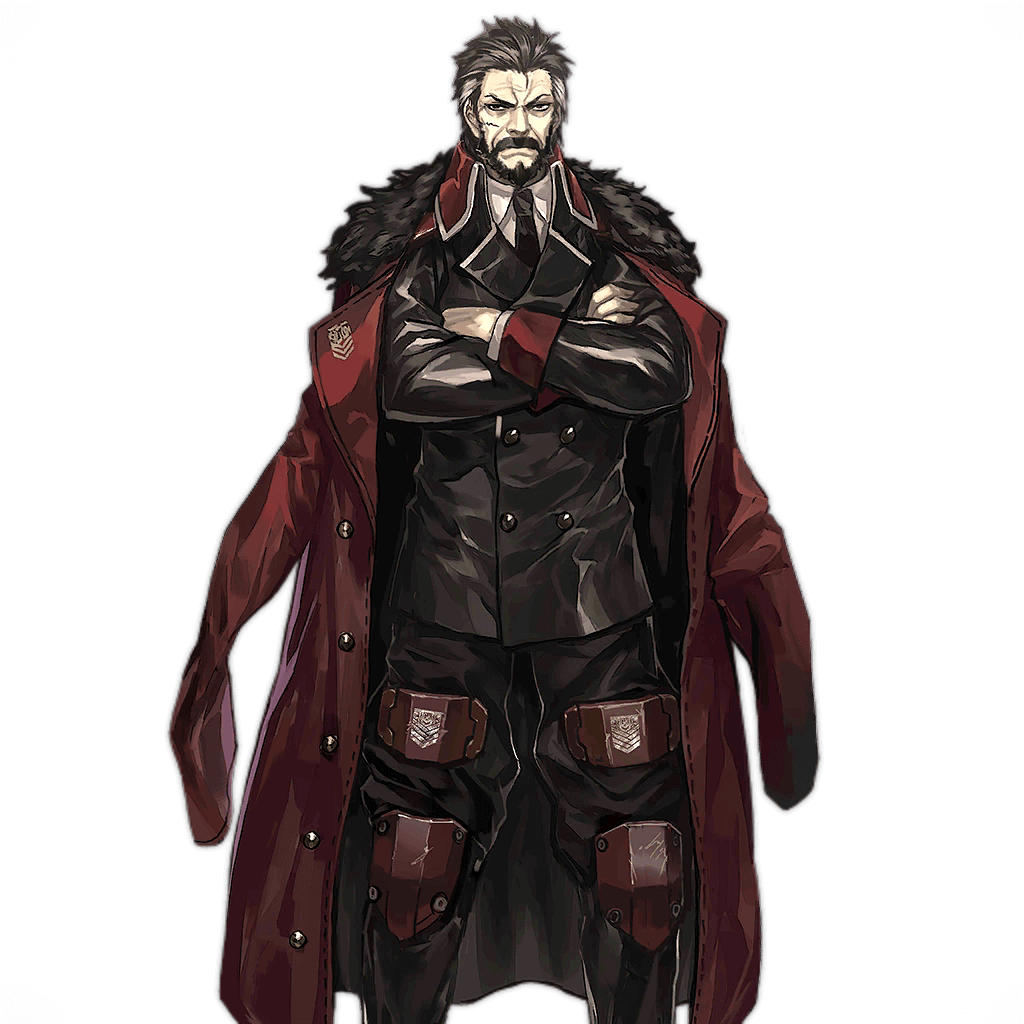 Helian: Mr. Kryuger, are you sure...you want to stay here?

Kryuger: They only need one scapegoat to help them finish acting out this farce. Given the chaos on the battlefield, they cannot and need not shut down all of Griffin’s frontline bases. Griffin will not vanish as long as those commanders and T-Dolls are still around. And those commanders will need someone to help them. Helian, I trust you know what I’m talking about.

While Kryuger has had a long presence in the story, much of his background outside of war and PMC work is a mystery. In August of 2047, an American incursion into Berlin meant Soviet Tactical Dolls were forced to be deployed early. Despite suffering from several issues, their success in combat was enough to prove their effectiveness to the Ministry of Defense. By November, Dolls were being shipped to Libya to support their foothold in Tripoli. Upon arriving, the Dolls were left in on-base hangers, waiting for their commanders to come to collect them.

As a company commander, Captain Berezovich Kryuger had been serving in North Africa for some time. Later that month, Kryuger was involved in the defense of Tripoli from NATO forces pushing from the West. On December 12th, Kryuger’s company was fighting out of a base camp West of Tripoli. One of the men on base was named Commissar Pablo, who supplied Kryuger with information from the frontlines. Additionally, the Commissar informed Kryuger that certain people thought highly of his leadership. Furthermore, “the old man” had sent Pablo to ask Kryuger if he was interested in transferring to Alpha Group. The identity of this individual is unknown, but it’s possibly Bureau Chief Viktor Zelinsky or Mikhail Tsvigun. Kryuger served during an unstated period under Brigadier General Carter Neustadt (unknown rank during WWIII) and their long history together, both as allies and future enemies, spans from the war to the modern day. 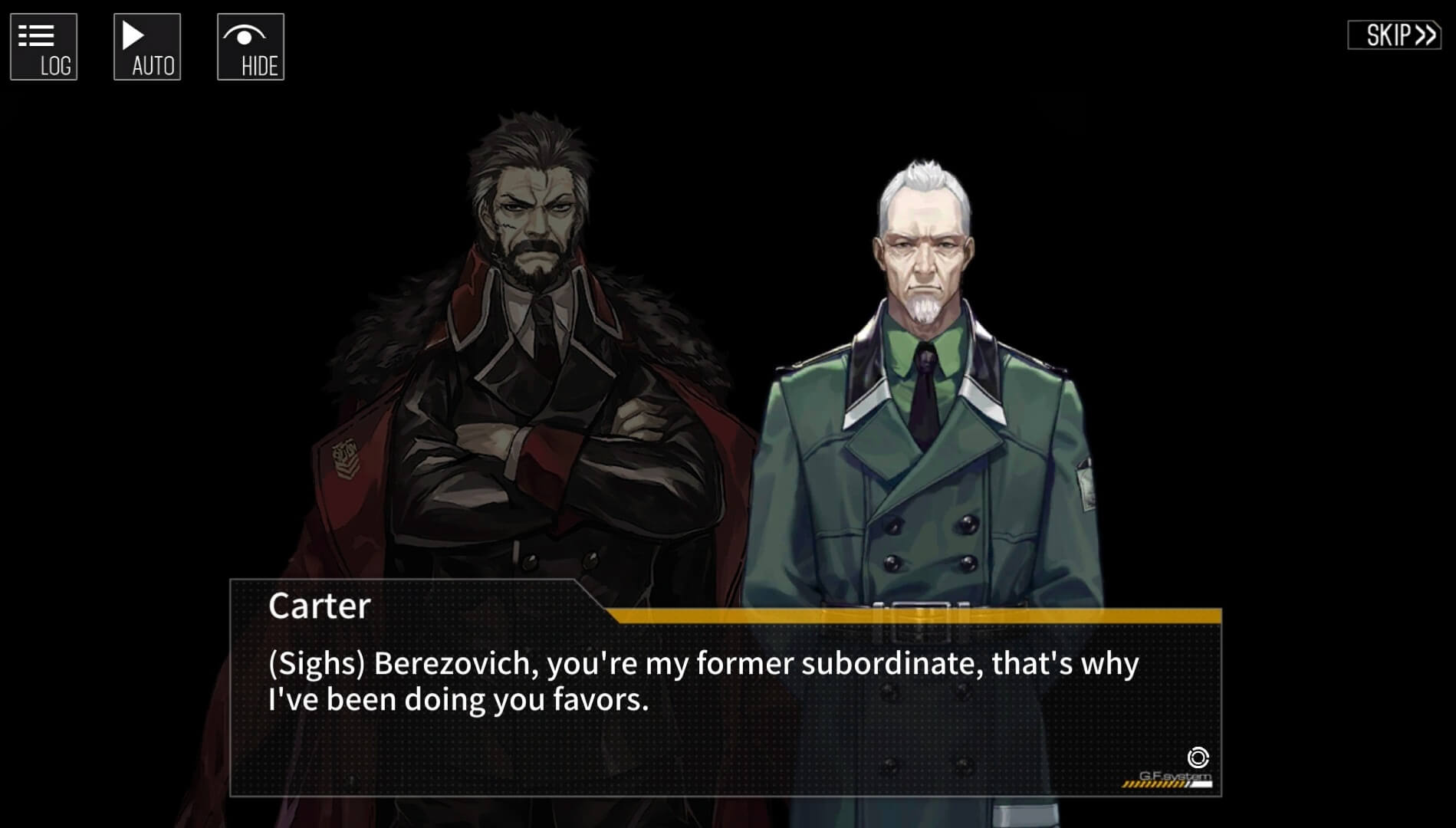 In 2049 or 2050, Kryuger was paid by IOP CEO Havier Witkin to save two scientists, Lycoris and Persicaria, from the secretive research group, 90Wish. Thanks to his service, Kryuger grew to be a close partner of Havier. With partnerships between themselves and Griffin, the G&K PMC quickly became one of IOP’s major clients. In fact, it was Griffin and his unknown investors’ idea to use IOP’s Dolls for PMC work.

In 2056 or 2057, Lycoris expressed fear that IOP would retaliate if he defected to Sangvis Ferri. To ensure his safety, Sangvis hired a G&K security detail to escort him to SF’s lab. Kryuger agreed to the mission, but not without a price. Subsequent research from Lyco was to be made available to Kryuger and G&K following the mission's completion. When Havier learned of Lyco’s leave, he was disappointed, but held no ill will towards Lyco or Kryuger for it. As of 2062, Berezovich Kryuger is the current head of the Griffin and Kryuger Private Military Company and Security Consulting Company. 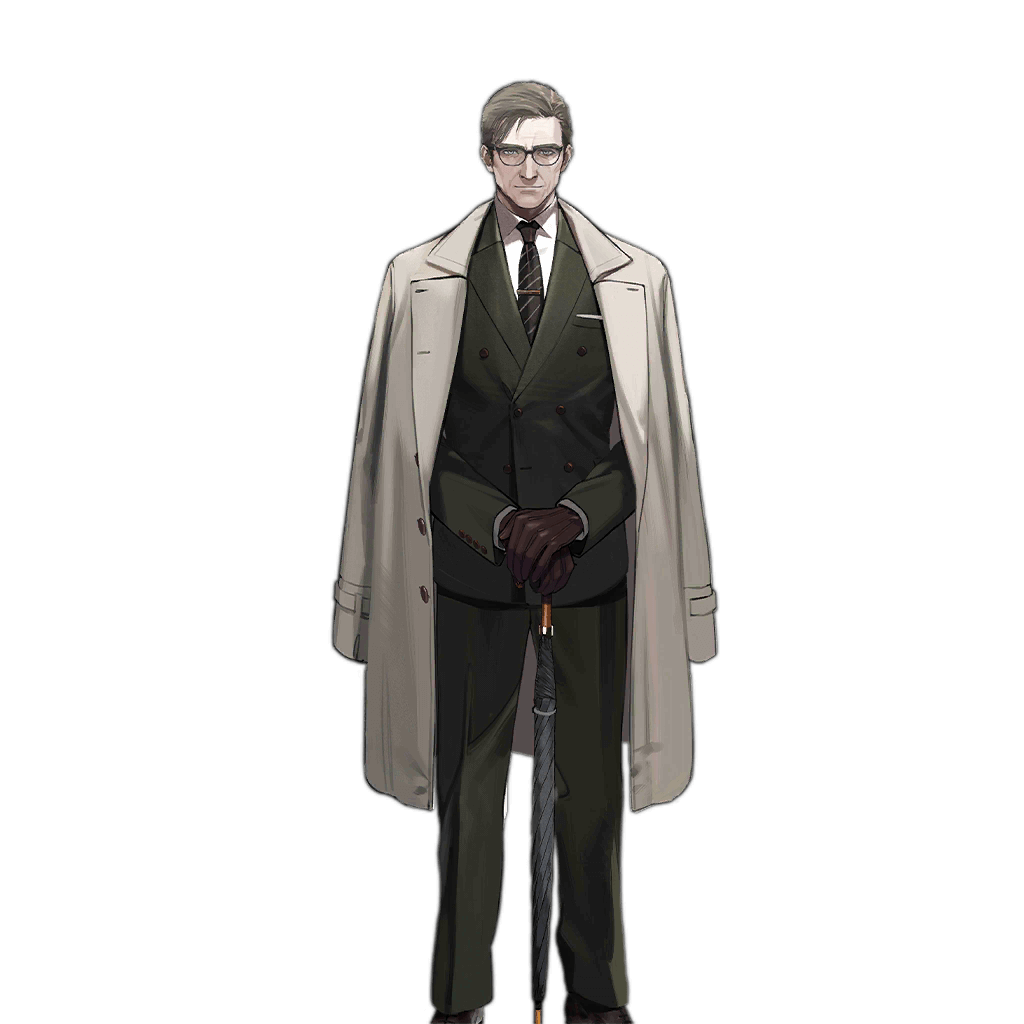 From the above considerations, we need a correspondent on the European continent. What we face now is an order that is completely unlike how it was before the war. We cannot count on history, data or algorithms to calculate the outcome. We need a hand, a hand that can move our pieces and clear the way for us. I feel that “Griffin'' is a suitable choice. He knows Europe as well as North America. If there are no objections, I suggest we begin voting now.

On December 31st, 2040, a young Lycoris left the Max Planck Institute for the night, heading to a nearby local bar to pass into the new year. Late in the evening, Lyco entered the old bar opposite the St. Thomas Church in downtown Leipzig. While speaking to the bartender, a man next to him recognized him as a foreigner and decided to order a meal for Lyco. The two spoke for a while, and he thanked the man for the meal. This man was an Englishman living in Germany, working as a news editor for his own small news broadcast company called Wave Tech. He usually wrote reports for larger news agencies throughout Germany, and many of his exclusives focused on the political situation in Germany at the time. After explaining his job, he properly introduced himself. His name was Griffin. 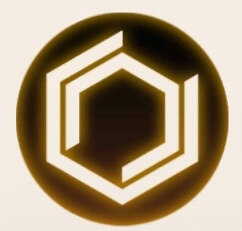 The logo of WAVE Technology in the Intelligence Center.

Griffin Lyons, an Englishman, is an astute intelligence agent well-versed in the political situations in North America and Europe. Griffin’s convenient rise to power was not a coincidence; his father was one of Major General Isaac’s person-in-charge in Northern Europe. The Prometheans are a council of Rossartrists who follow the former UNRA’s “Project Prometheus”. Their overall goal is to prevent humanity’s self-destruction through the establishment of a world-class government over all of mankind. This government eventually emerges as the Union of Rossartrism Nations Coalition. 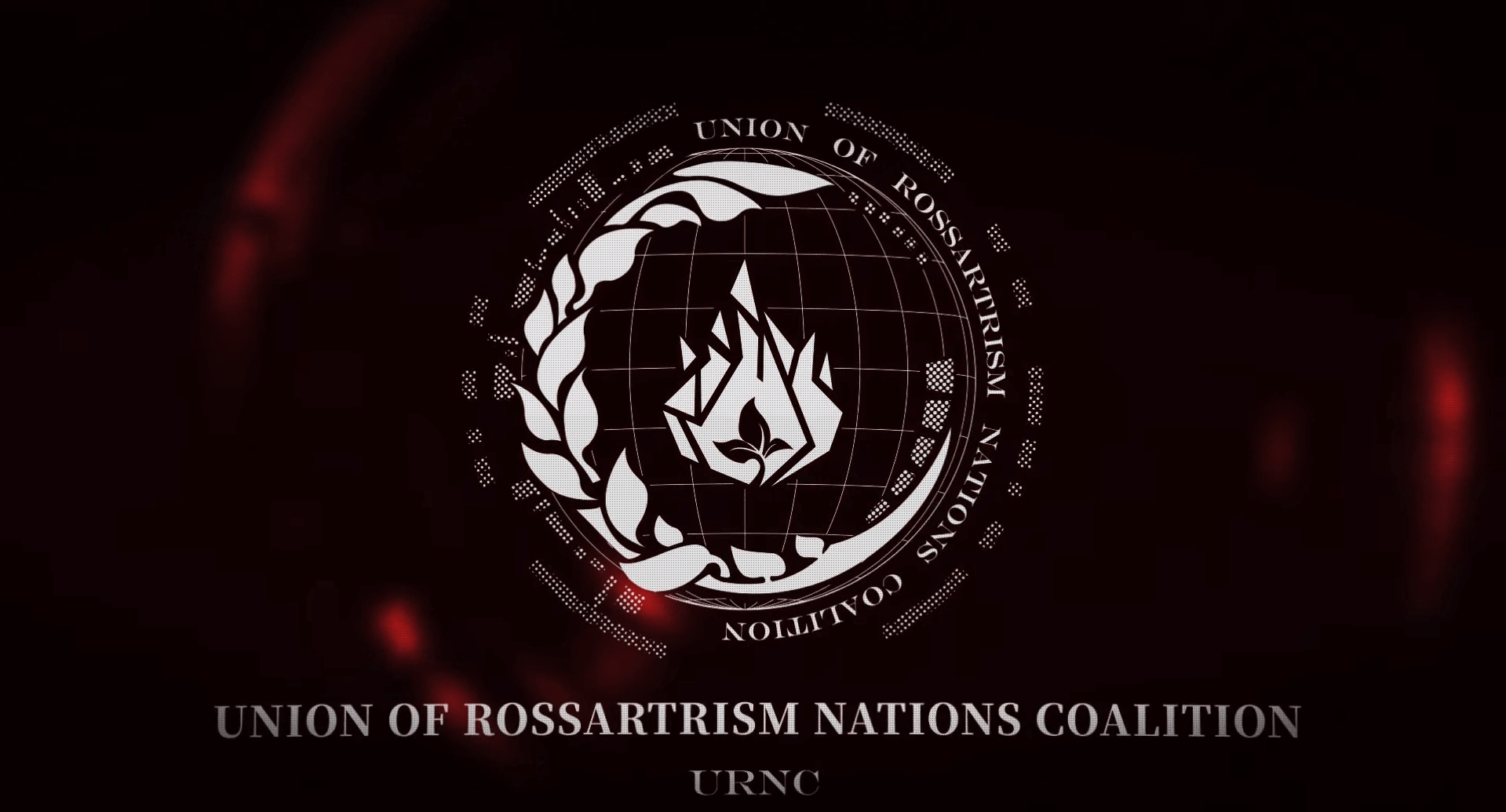 Throughout the 2040s, Griffin gained the attention of MG Isaac for his 2043 report detailing the state of affairs amongst the German Social Democratic Party. His impeccable report earned him the position as the chief of the Eastern European station for Isaac, acting as an intelligence agent in the region. According to an interview of Griffin by a likely member of the Council, Griffin had possibly been working for the British Secret Intelligence Service (MI6), sometime before World War III began.

During WWIII, he carried out multiple intelligence operations in Europe for the Americans. In the late 2040s, MG Isaac, the head of a secretive intelligence agency, personally recommended Griffin to the Council for his outstanding work in Europe. It is currently unknown if this intelligence agency is the Council, a group aligned with the Council, or MI6. In Isaac’s own words, Griffin’s service offered “A web of contacts spanning Eastern Europe, an information collector, analysts, relays and executors.” His influence could “even make you sharpen your own blades and monitor your own puppets.” 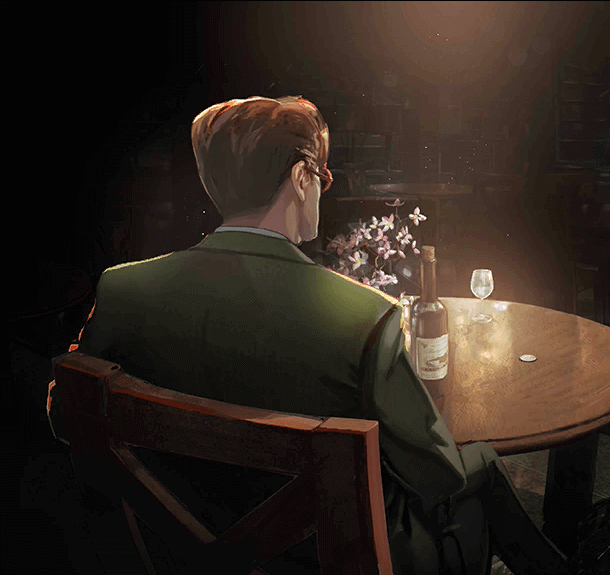 The following section contains spoilers for the Mirror Stage and Poincaré Recurrence events. Readers who do not wish to spoil themselves should stop reading past this point.

As of Poincaré Recurrence, Griffin Lyons is a sitting member of the Prometheus Council. His service and character have earned him the English title of “Sir” and he is addressed as such by his peers. His web of contacts include Berezovich Kryuger, Havier Witkin, Viktor Zelinsky, and Mikhail Tsvigun. Overall, specific details on Griffin’s history remain sparse, but his beliefs have been openly stated in his own words. While he agrees with Rossartre’s overall goal of a united new world, he understands the inherent idealism of Rossartrism. Humanity must take responsibility for their actions.

In his view, humanity by nature will never unite on its own accord; therefore, they would need to be forced to unite in this new world. Through this system, those who cause divisions that threaten the order will be punished, and those who work with their fellow man to achieve greater peace will be rewarded. These corrective rules would usher in a new order, one that would correct mankind’s evils. Griffin understood Rossartre's reasonings were true, but Rossartre’s hopes to achieve such aims were too idealistic for the world in which they lived.

Lore writer for the Girls Frontline series. I play on the EN and KR servers.

Feedback and further questions can be asked through Twitter or Discord.