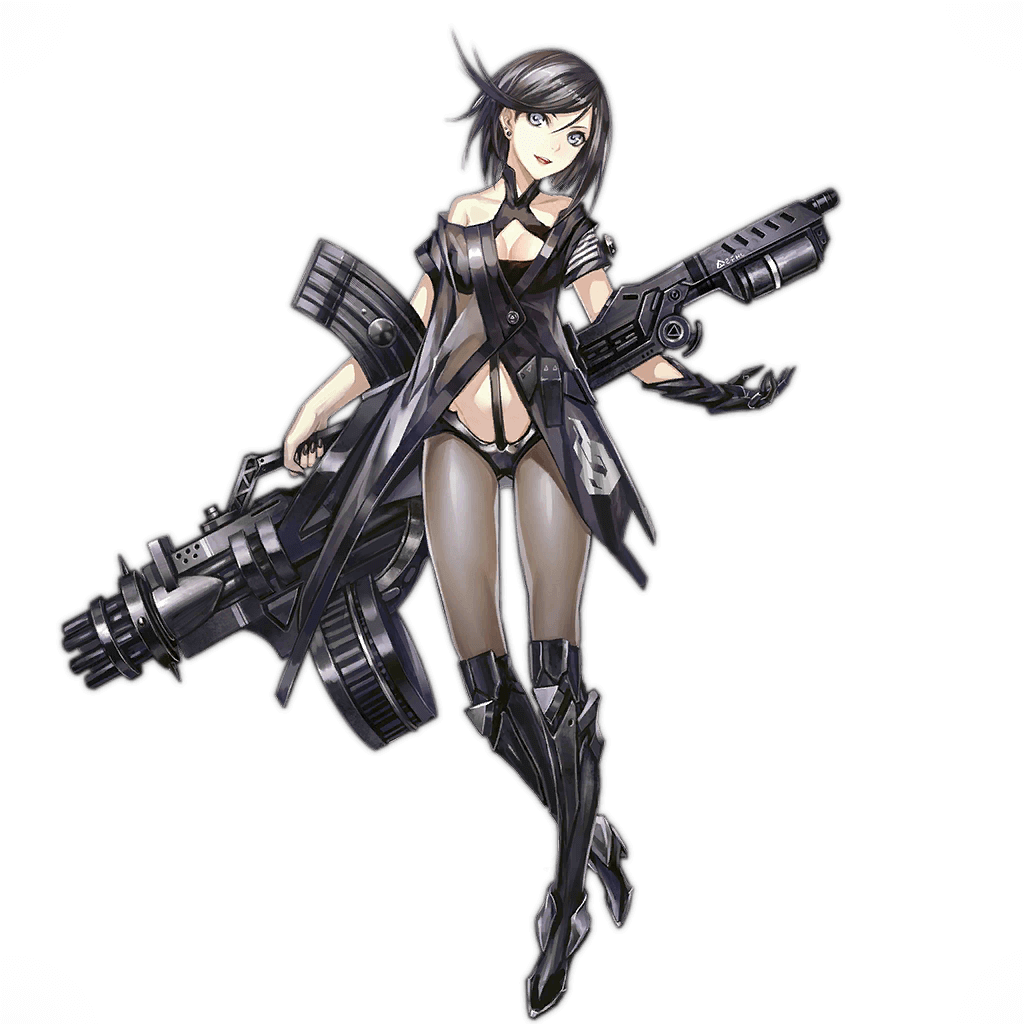 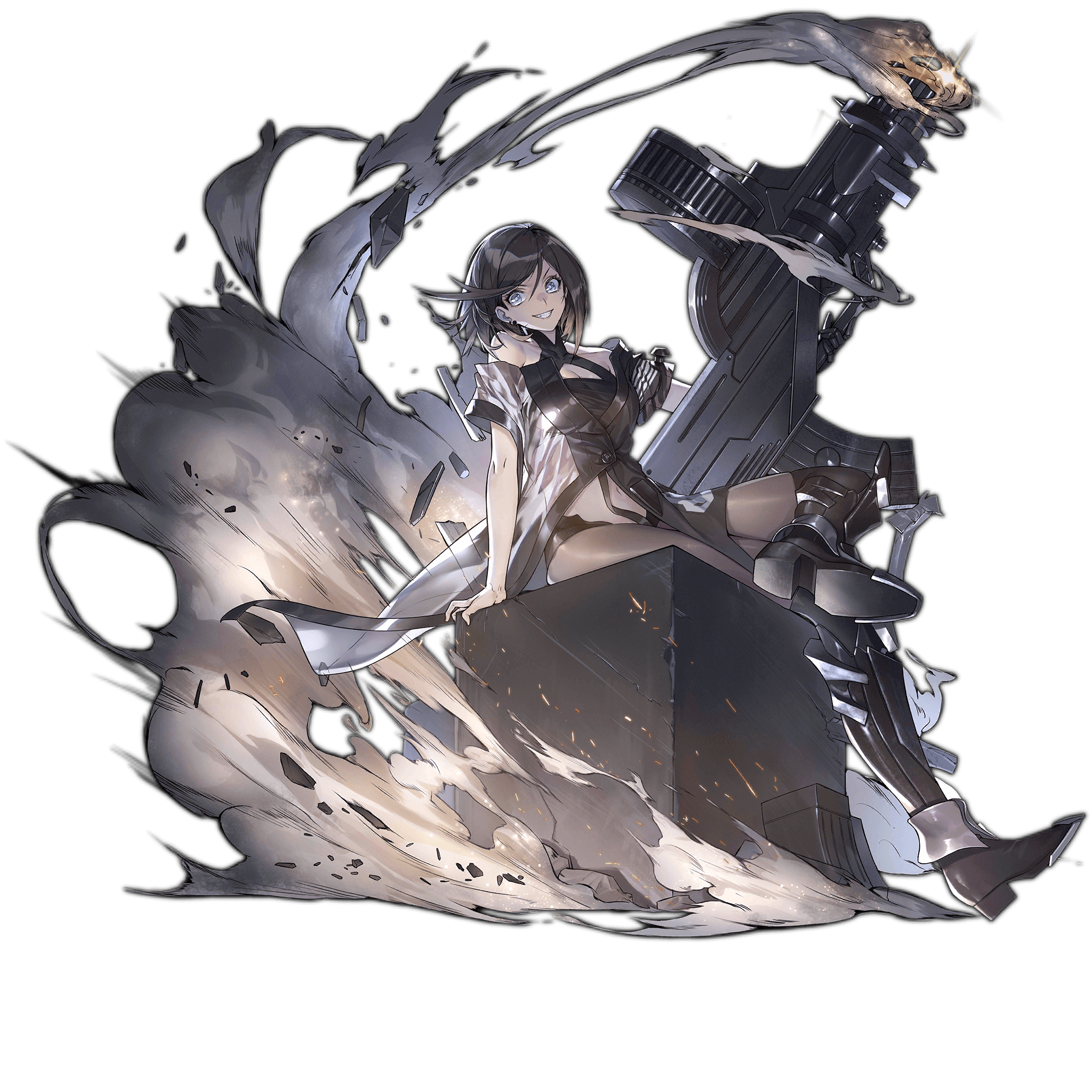 Intruder provides a small but notable set of universal Tile Buffs, including the often coveted Critical Hit Rate. The Damage buff is appreciated by all units, with Evasion being a good addition to the frontline units, and Accuracy is not going to go wrong for any units, although most Protocol Assmiliation units have decent accuracy to start out. Intruder is not likely to be picked for her Tile Buffs, but they are nice bonuses to any unit paired with her.

While not actually Gilgamesh in disguise, Intruder is still an odd Ringleader. All of her Skills are focused on not herself, but instead upon supporting her allies, often by summoning hordes of Dinergates, either to support a distant Echelon or in battle herself. Unfortunately, Dinergate swarms are often much less effective against our enemies than against our own Echelons, leaving Intruder as more of a meme than a menace, despite the sweet-looking animation.

Military Raid’s summons two sets of three groups of Dinergates, roughly aligned with the rows of the combat grid. Each group is a 5x linked Dinergate that will run across the screen. The stats of these summonses is determined by Intruder’s own stats: 50% of Intruder’s Accuracy and Evasion, and 100% of Intruder’s Damage. Their HP is a scaling percentage of Intruder’s base HP, 5% normally, 10% with max Peak Value Analysis. Unlike a traditional Dinergate, these summoned Diners simply run across the screen, dealing Damage to everything they encounter on contact. While they are running these units can be damaged or destroyed, which can limit their Damage potential, as each link lost is a loss in Damage, which is made worse by the fact that these summonses do not deal their full Damage value, but instead a percentage of it. Each link will deal 0.2x Damage at Skill Level 1, rising to 0.4x at Level 10, and 0.5x at Peak Value Analysis 4. This puts a hard limit on their Damage potential, with potential drawbacks. The rest of Intruder’s kit works to mitigate some of these.

Everything else about Intruder follows this same vein. Her Skill 2, Indomitable Reinforcements, is a Strategy Skill that summons Dinergates into another Echelons battle. These Dinergates arrive in two 5x Linked groups whose primary value is to soak up Damage, although if they survive long enough they can do some chip Damage, although this should not be relied upon.  Strengthened Reinforcements (Skill 4), will boost the Damage of all reinforcement units, scaled off Intruder’s own Damage. For a maxed Intruder’s level, this will be a roughly 70 Damage boost, along with an HP shield to help with survivability, up to 130 HP at Intruder level 100.

This sounds better on paper than in practice, however. While doubling of the Damage of the Dinergates summoned by her Skill 2 and providing them with an HP shield equal to about half their health sounds impressive, it tends to be inadequate to keep pace with high Damage enemies and the rising number of AoE attacks in the game.

Intruder’s third Skill All-Round Defense is a flat HP shield to all units at the start of the battle, based on Intruder’s health. Typically, HP shields are an invaluable resource in Girls’ Frontline, and many other Coalition units with HP shields receive high praise, but Intruder will not be joining this group for the following reasons: First, the shield given by this Skill is only applied once, and expires after only five seconds, while many other shield skills active multiple times. This leads to the second issue. With a short duration, this shield will either soak up the early hits in battle and vanish just in time for harder hitting enemies to arrive or vanish prior to enemy Skills finishing their cooldowns, leaving her allies exposed to the attacks that they actually want the shields to soak/avoid.