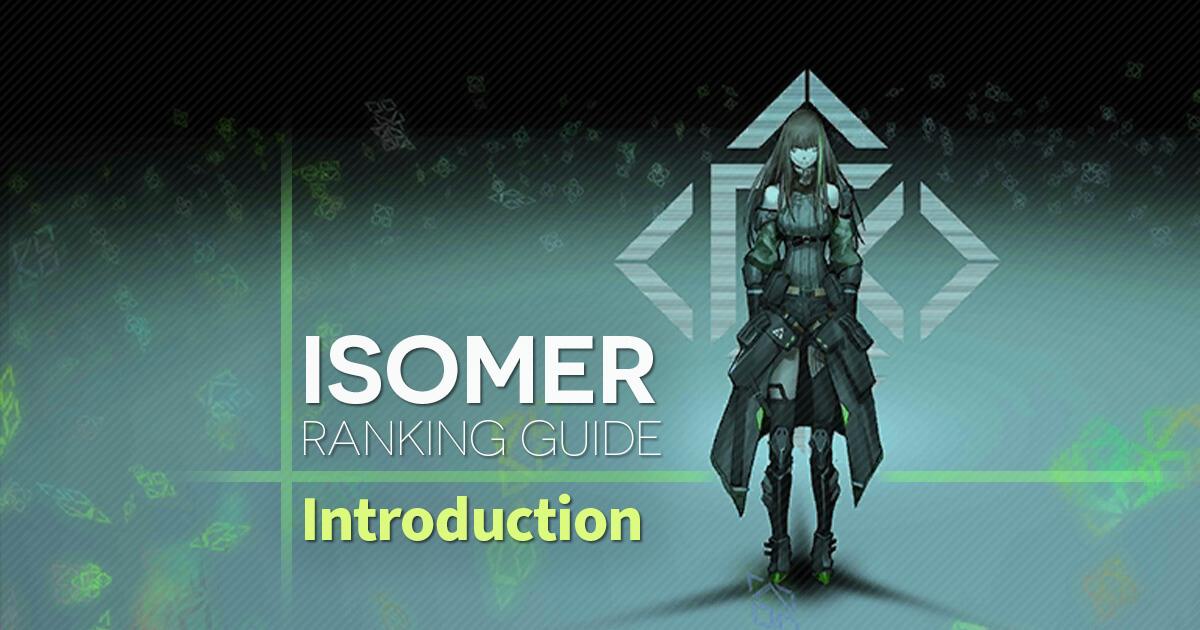 The latest ranking map in Girls' Frontline comes bundled with the Isomer story event, with exciting rewards like the Zodiac Fairy alongside the somewhat less exciting reward of MG4's special equipment. Want to get the limited time rewards but have no idea how to navigate the Reign of Chaos map? Wondering what to do to maximize your points? This guide series is for you.

This page is under construction - more will be added as EN players get some time to test out ranking strategies!

Should I do Normal or Hard?

If your units can't handle Hard (EX) difficulty ranking, you can instead try Normal difficulty - while the score ceiling is lower, it's still possible to earn a lot of points even on Normal - placing high enough for the Fairy/Special Equipment rewards should be easily manageable.

Isomer ranking lasts 9 turns (ends at the start of Turn 10).

I don't have time to read all of this!

No problem! Check out the step-by-step guide below. 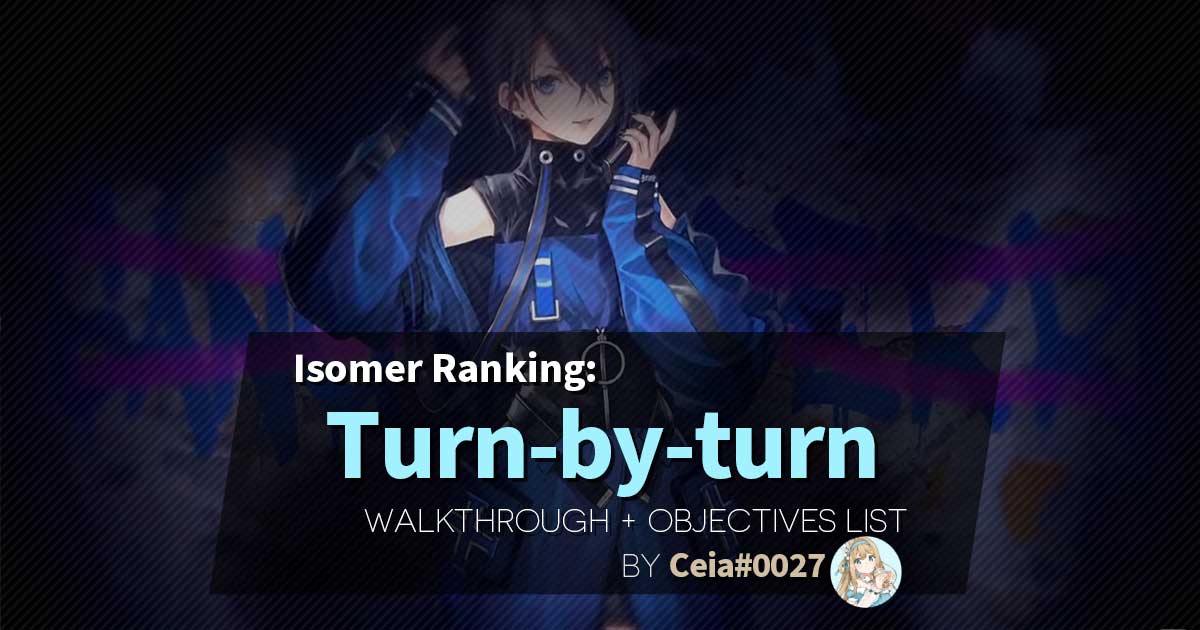 The ranking map might look big at first, but it's really split up into some fairly straightforward zones: 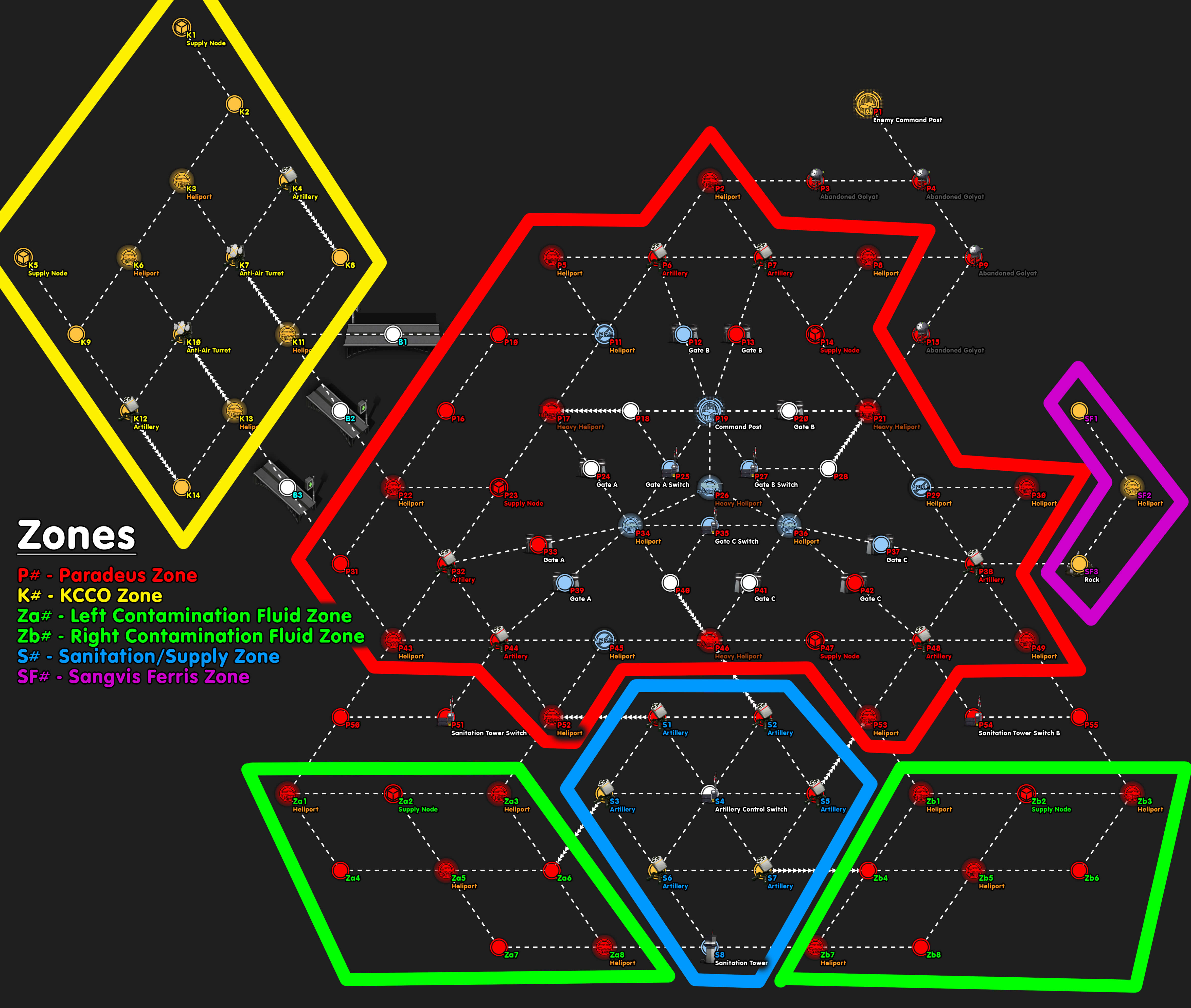 Credit to mis, Midgie, and Ceia from GFEN Discord.

You start off in this area with your command post and some heliports. You'll have to travel from this zone into the other zones, and the helipads in this area will spawn some enemies that you can farm for points. These enemies are probably the hardest - you'll need HOC support because enemy force shield scales up to 90% in EX difficulty, making them effectively impossible to kill without HOC shield break.

Due to the deployment point mechanic of HOCs, you will need to capture one Heavy Heliport in this area to spawn all 3 HOCs (recommend AGS-30 and 2B14, unless you have AT4 at a higher rarity/skill level than those two for some reason). Capturing the southern heliport ASAP is recommended since it'll be part of your supply line anyway.

There are also 3 NPC echelons in this area; they will turn into hostages at predetermined turn counts, at which point you can rescue them for +10000 points per remaining bar of HP they have.

Altogether, they are worth +90000 points! While you can use them as conga line swap fodder to save AP, do remember to keep them out of harm's way so you don't lose points from enemies running into the hostage.

The supply flag is located on the switch in this zone. Connect the supply point to your HQ by the start of Turn 4 and you'll earn points as long as your supply line is not broken:

You can also blow up the turrets in this area with HOCs for another +10000 points each. (Note that these must be destroyed with HOC - you can't walk over them with an echelon to destroy the installations.)

While the bottom of this zone is connected to the contaminated (zombie) areas, the ELIDs won't walk in - you won't need to leave an echelon in this area to defend it.

Helipads in this area spawn ELIDs (zombies) only. You can send units here to farm ELIDs for points, but the contaminated tiles deal damage to your T-Dolls every turn!

Ideally, your units should be able to handle the ELIDs while at low dummy link count. The enemies here are easy but also don't give as many points compared to the Red/Yellow zone enemies, but there are two Supply Nodes that you can capture for +20000 points total, provided you have control over them by the start of Turn 10.

AR and SMG grenadiers perform very well here, since grenades (other than K11's) are fired from only 1 Dummy Link and will be potent regardless of your unit's damage taken. Pairing them with an SG tank like S.A.T.8 and shielding HGs like P22, HS2000, or Sei will give you the survivability needed to sustain fights in this area on low Dummy Link count.

The sanitation tower in the Blue Zone can be activated to temporarily clean the area. This has a 3-turn cooldown - so use it wisely!

This zone is blocked off by a boulder - you can either destroy it with an abandoned Goliath in 1 hit, or bombard it with BGM 15-20 times to kill it at the cost of a few thousand ammo and rations.

Once the obstacle is destroyed, enemy SF patrols will spawn; they will turn into a ringleader boss at the start of your turn. Points in this area come from farming the enemy spawns after they convert to bosses. There are 5 possible enemy bosses in total: Executioner, Intruder, Alchemist, Dreamer, and M16A1

Standing next to the spawning helipad can cause your echelon to engage the enemy patrol before they turn into a boss - you lose out on a few points if this happens, since the boss is worth more points than the patrol unit.

To do this zone properly, kill the first spawn (since that one does not turn into a boss) then move back 2 tiles so there's one space between your bossing echelon and the SF helipad. You can then farm the boss spawns from it.

It is recommended to send 2 RFHG echelons in the area. Capture one heliport (for resupplying and repairing), and leave the rest so you can farm the KCCO heliport spawns for points. If AP permits, you can also capture the supply nodes in this area for up to another +20000 points.

This zone is connected to the main area by 3 bridges that can be blown up by Abandoned Goliaths for +10000 points each. You can do this along the way as you move units into the region.

The KCCO armored spawns have no Evasion, but the Cyclops units do - so be careful when engaging them. (An RFHG with Carcano M91/38 is recommended to take down the heavily armored Hydras that spawn here. If you don't have her, a high DPS RFHG with a good fairy will be needed to minimize damage taken.)

1.287m No Dupe run by CosmicArcher

Worried about your score potential because you were unlucky with dupes? Check out this no-dupe, 1.287m (current top 5) Isomer ranking run from CosmicArcher!

This is a great showcase of the fact that you can stay competitive in GFL ranking without grinding multiples of the same T-Doll.

Here are some commentated attempts of EN's Isomer Ranking Map by Ceia!

Lots of damage control in this run, mainly due to the horrible RNG. Good VOD to learn from, most of the turn by turn objectives are fulfilled.

Here's an attempt of Isomer rankings I did off-stream with the latest strategy, a few minor mistakes in this attempt, which can be completely avoided.

You can also check out these sample runs from older servers for an idea of how to start your ranking attempt. Note that the anti-air installation bug (where blowing up an AA tower will allow you to paradrop to any helipad in its range, even if they are covered by other AA) is inconsistent on EN and you may or may not be able to copy these 1-to-1 depending on if the bug works for you or not.

Want some detailed examples on what to do against specific enemies? Brekkie (the #1 player at the time of writing) has you covered with this comprehensive guide! 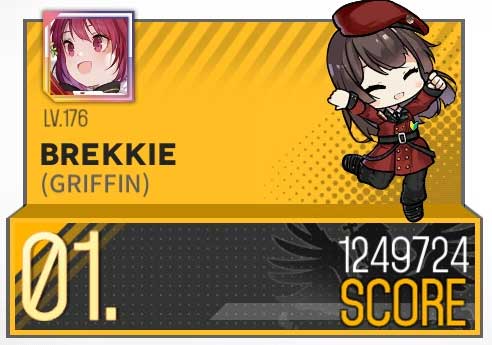 It's probably the most easy-to-understand Isomer guide out there, and it even showcases how to handle all the difficult fights with animated gifs. No dupes? No problem! You can easily make 10 serviceable echelons by following the tips in here. 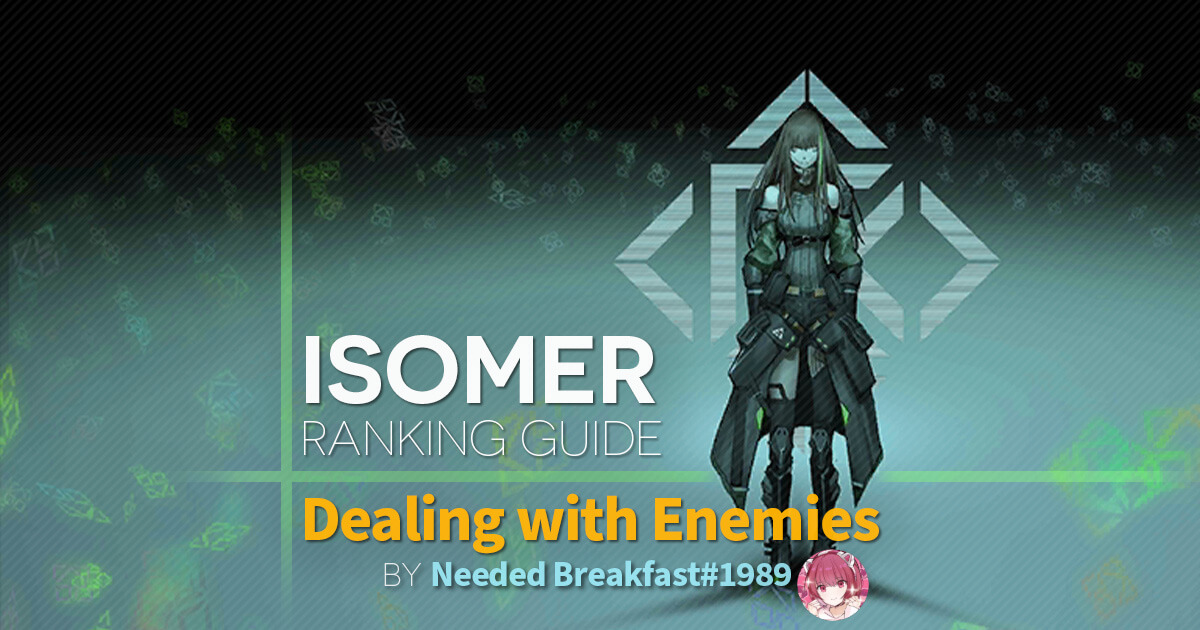 Not sure what enemy spawned because so many variations exist? Want to plan your opener better? Check out this incredibly comprehensive Ranking Planner by Midgie! The amount of detail that went into this is absolutely incredible. 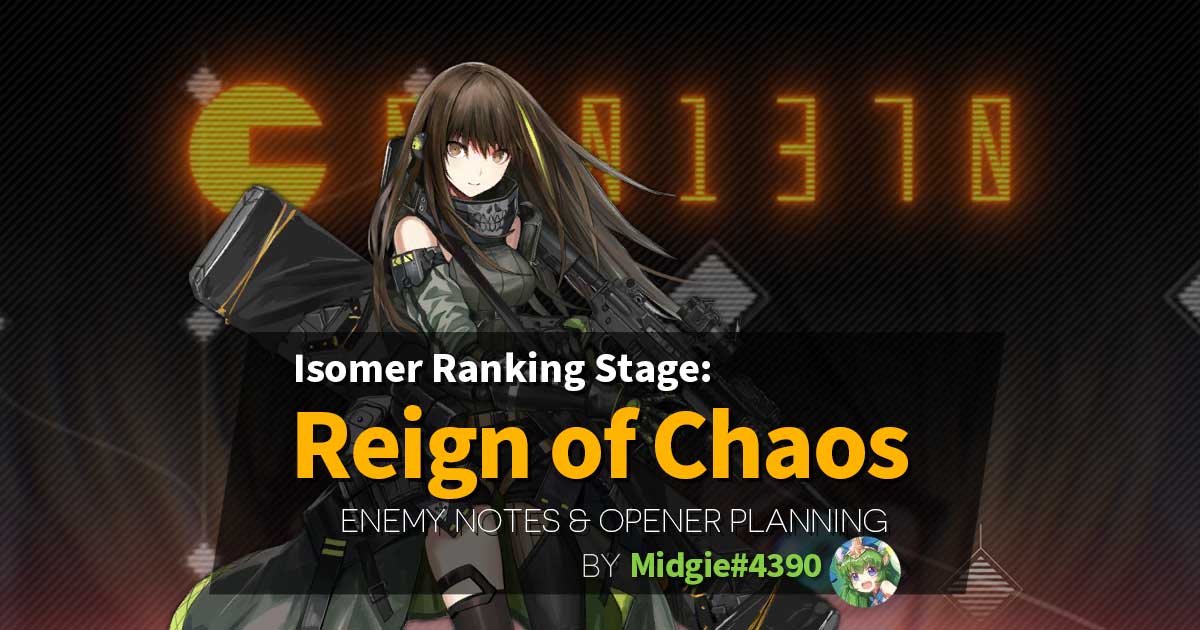 Know the basics and want a concise spreadsheet-based overview of all your T-Doll options for efficient planning? Check out this sheet by Arcus! He also got #1 when ranking started but unfortunately lost his spot soon after. 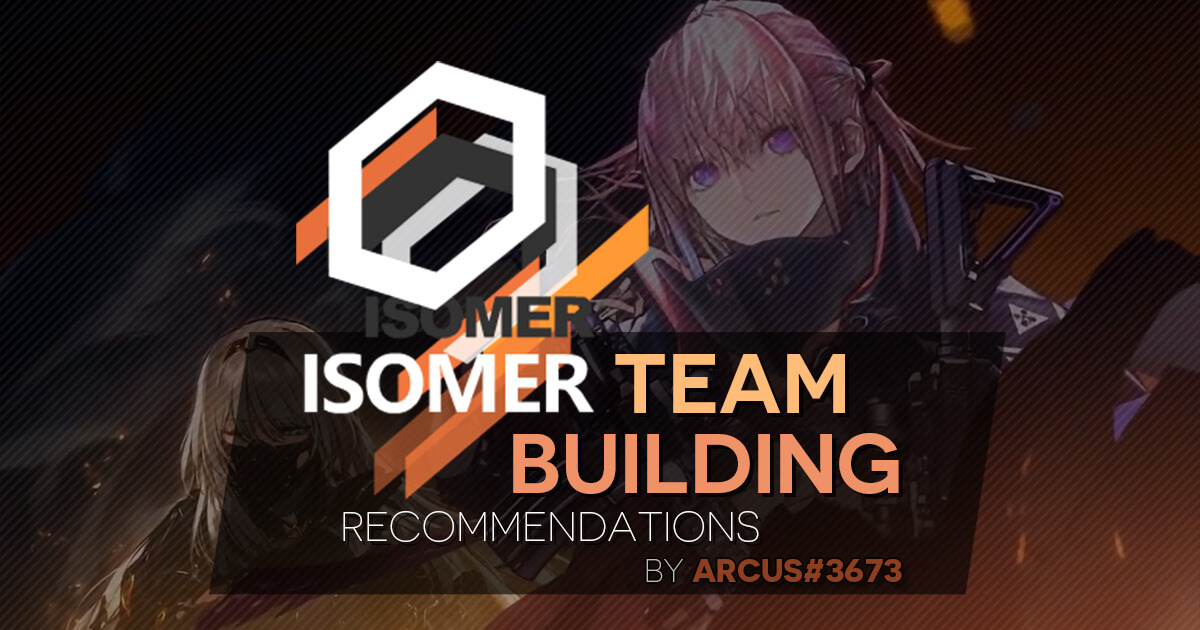 Need some more visual examples of the tough fights? Sleepy compiled this mega list of team comp video references to help with that!

These are three most hyped t-dolls for the Isomer ranking event. Was the hype warranted? Here we have put together some simulated battle for you to decide for yourself. Note:

The 3x Doppelsoldner enemy node is easily dealt with. Here one trick that was pulled was to put Carcano M91/38 on manual. Wait for the second Doppelsoldner to take 1 hit from M200 before letting go of the skill shot.

Since Carcano M91/38 is relatively rare, WA2000 or most strong self buffing rifles can also be used.

Note, the fight using M200/WA2000 with AGS was too difficult (for Sleepy) and BGM was used instead.

From these videos, we can see that M200 can target Doppelsoldner and Uhlans with relatively high certainty. Uhlans and Doppelsoldners have slightly higher range than Streletes, thus M200 targeting the furthest unit naturally picks them up.

M200 also have incredibly high and reliable damage. With perfect accuracy during skill activation and ability to crit, she make quick work of her targets.

However, she's not perfect, and as we see, the first out of the 3 Doppelsoldner encounter, she starts with killing the 2nd Doppelsoldner before dealing with the first one. Careful management of kiting and line of sight is required here.

In the above videos, we also see that P22's shield is heavily used, and that often the doll takes some, but not too heavy, beating from the enemy. Here's what the damage looks like in a comp without P22. Keep in mind these are last turn encounters and merely surviving is good enough. So don't feel the need to go out and farm 10 P22s.

While Strelets' damage are usually manageable, the Uhlans' missiles always take a huge chunk of the targeted T-Doll's HP away. It launches very quickly and is hard to kite, but due to the way shield works, P22 is able to greatly mitigate that missile damage. The difference, as we can see, is quite substantial.