Making The Most Out Of Your EXP Boost 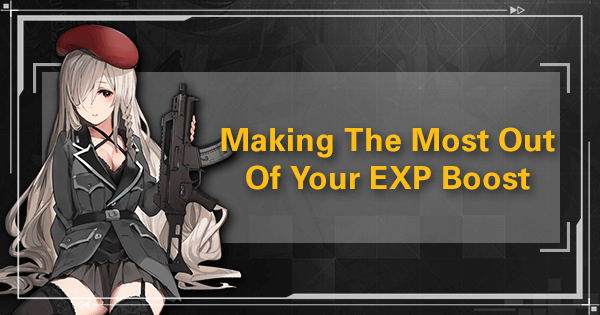 So, maybe you’ve just set up your first rag-tag Echelon or maybe you’ve just managed to scrounge through a difficult chapter. While you were busy learning and progressing, you came across a notice about an EXP boost event. Although it’s purpose may seem self-explanatory, making full use of this EXP boost is invaluable to any new player, as it will allow them to significantly boost their progress and strength in a short period. If you’re curious about how to optimally use this incredible opportunity, read on -- this guide will explain in full.

First off, you may be wondering -- what exactly is an EXP boost event, and what does it do? To put it in the simplest possible terms, it is a limited-time event where EXP gained through Combat Missions is boosted through a x1.5 multiplier. Obviously, there’s no downsides to this event; if you make good use of it, you’ll be prepared for upcoming story events as well as progress through the game faster and more efficiently. It’s a win-win, which is why it’s a good idea to use it effectively.

During the EXP event, you may be tempted to try and level a variety of T-Dolls, but this is very inefficient in the long term. Having a single high-leveled (level 90+) team will enable you to farm more efficiently, defeat harder enemies, and beat higher difficulty simulations. Therefore during the EXP event, it’s best to focus on leveling one team all the way to level 90 before you direct your attention to other T-Dolls.

In the regular game (i.e. when an EXP event is not active), one of the most tedious and resource intensive grinds for a new player is leveling their first team of units from level 30 (Dummy Link 3) to level 70 (Dummy Link 4). The EXP boost granted through this event, however, can alleviate a significant portion of this grind -- vastly reducing the Resources and time necessary to level an Echelon. But although the EXP event cuts down on the Resources expended during leveling, try to keep in mind your Resources are not unlimited. As a new player, you will need to balance leveling and T-Doll production. It’s best to not produce more than four T-Dolls or pieces of Equipment per day during the event as four is enough to complete the daily quests for production. Producing unnecessarily during an EXP boost event cuts down on your Resources -- Resources that could be used on leveling your first team instead.

While you may be tempted to continually farm an optimal map over and over (maps which can be found in our leveling guide), it is also important to not neglect the story. Adventuring further into the story will not only give you a good indication if you can move on to a better leveling map, but will also unlock better Logistics and story T-Dolls. Higher difficulty maps not only provide a higher EXP gain -- much higher while under the effects of an EXP boost! -- but they also have higher EXP falloff levels and provide more commander EXP. Since commander level milestones award amazingly strong dolls like M2HB and M14, it’s advisable to progress through the story as much as possible.

This is a lot to keep track of, but don’t worry; here are a few takeaway points that will help you maximize the benefits earned from this event:

At this point you may already have one team above level 90 and fully Dummy Linked. The process of raising your T-Dolls might have been tough, but the difficult part is over -- training your next team will be much simpler and easier. Through a method known as Corpse Dragging (an explanation of this process can be found in our leveling guide), you can cut your Resource costs from leveling into a fifth of what they used to be. With efficient Logistics supplying you resources, you can practically level indefinitely without needing to worry. For these reasons, making the most out of the EXP boost event for experienced players involves utilizing Corpse Dragging to level up as many T-Dolls as possible before the event ends.

If you are new to Corpse Dragging but already have a team over level 90, 4-3E is an excellent place to Corpse Drag due to its efficient clear and weak enemies. 4-3E does, however, have an EXP falloff at level 75. In order to obtain maximum efficiency, don’t level T-Dolls past 75 on this map as the reduced EXP does significantly affect the EXP boost.

As is the same for new players, it is imperative for experienced players to not ignore the story but this is to a lesser degree. The focus around this point is unlocking chapter 6 and chapter 0 which both have valuable Logistics.

Here are two takeaway points that will help you maximize the benefits earned from this event:

Being at the forefront means hours of relentless grinding every day. Due to your nonstop grind (even without an EXP up event) you most likely have multiple teams leveled up above 90 and many other dolls leveled above 70. You may feel like you are running out of T-Dolls to level at this point. Fortunately, the recent release of Shotguns and Heavy Productions means that you now have access to new T-Dolls to level. Leveling up useful Shotguns should be your current task.

Due to the release of Armor equips alongside Heavy Production, you should also begin Corpse Dragging on 0-2 to efficiently raise your T-Dolls up to level 90 and earn cores. This can be done by using M16A1 with a 5 star or 4 star Armor Equipment (optimally preferred but not required) as a tank. There isn’t much to do for forefront players other than to prepare for an upcoming event. Until then, have a happy time leveling.

Here are a few takeaway points that will help you maximize the benefits earned from this event:

Overall, it’s best to keep in mind that although the EXP event is a great opportunity to alleviate some of the grind inherent in GFL, everyone can and will play the game at their own pace. If you can’t take advantage of this event for any reason, don’t stress about it! While grinding can be draining, it isn’t particularly difficult, and EXP events should be run fairly regularly. The most important thing to keep in mind is that it’s always best to use an event to help you enjoy the game more. While there are ways to make use of the EXP boost optimally, there is no right or wrong way to play if what you’re doing is working for you.

Should You Farm? January Rescue Event