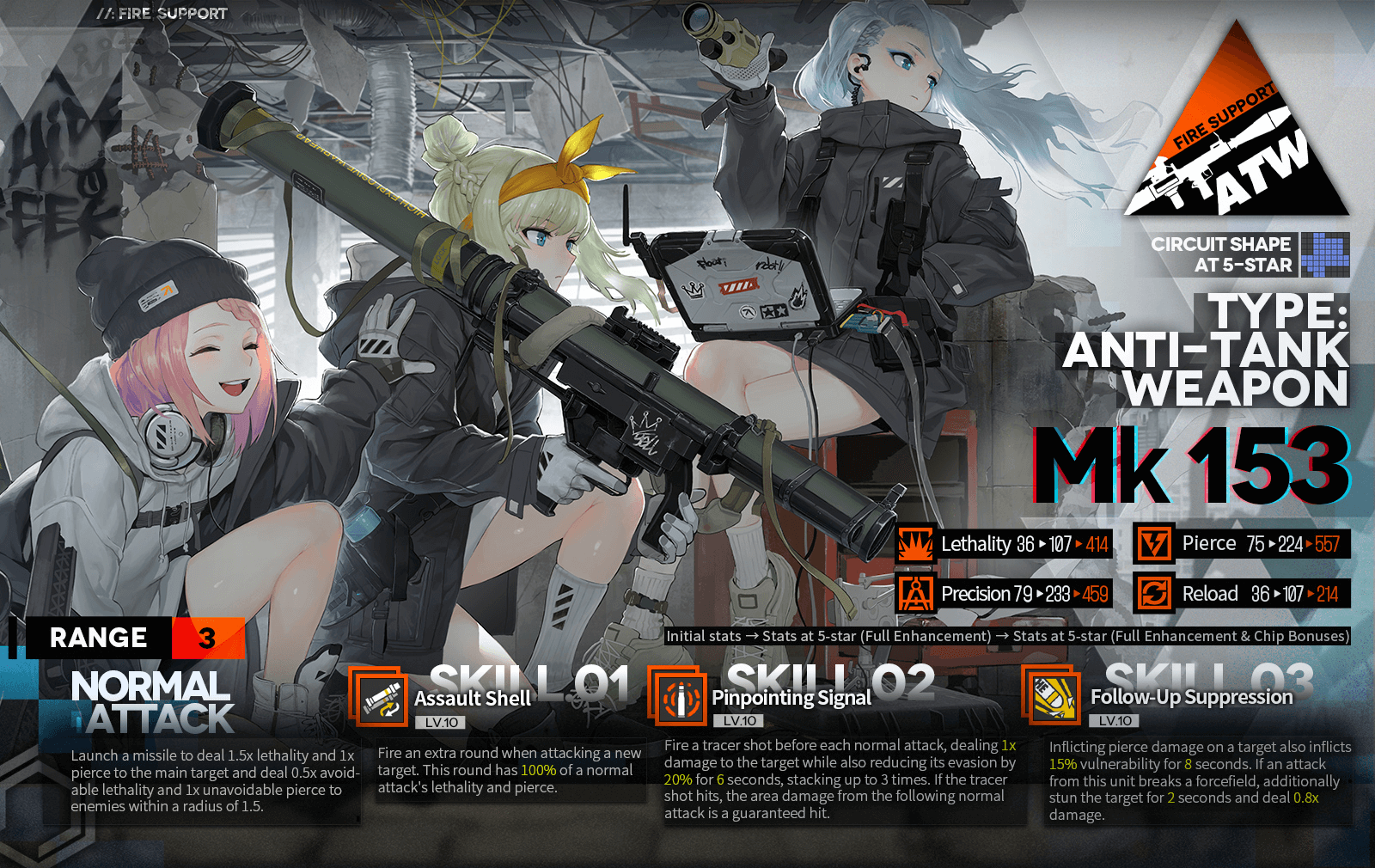 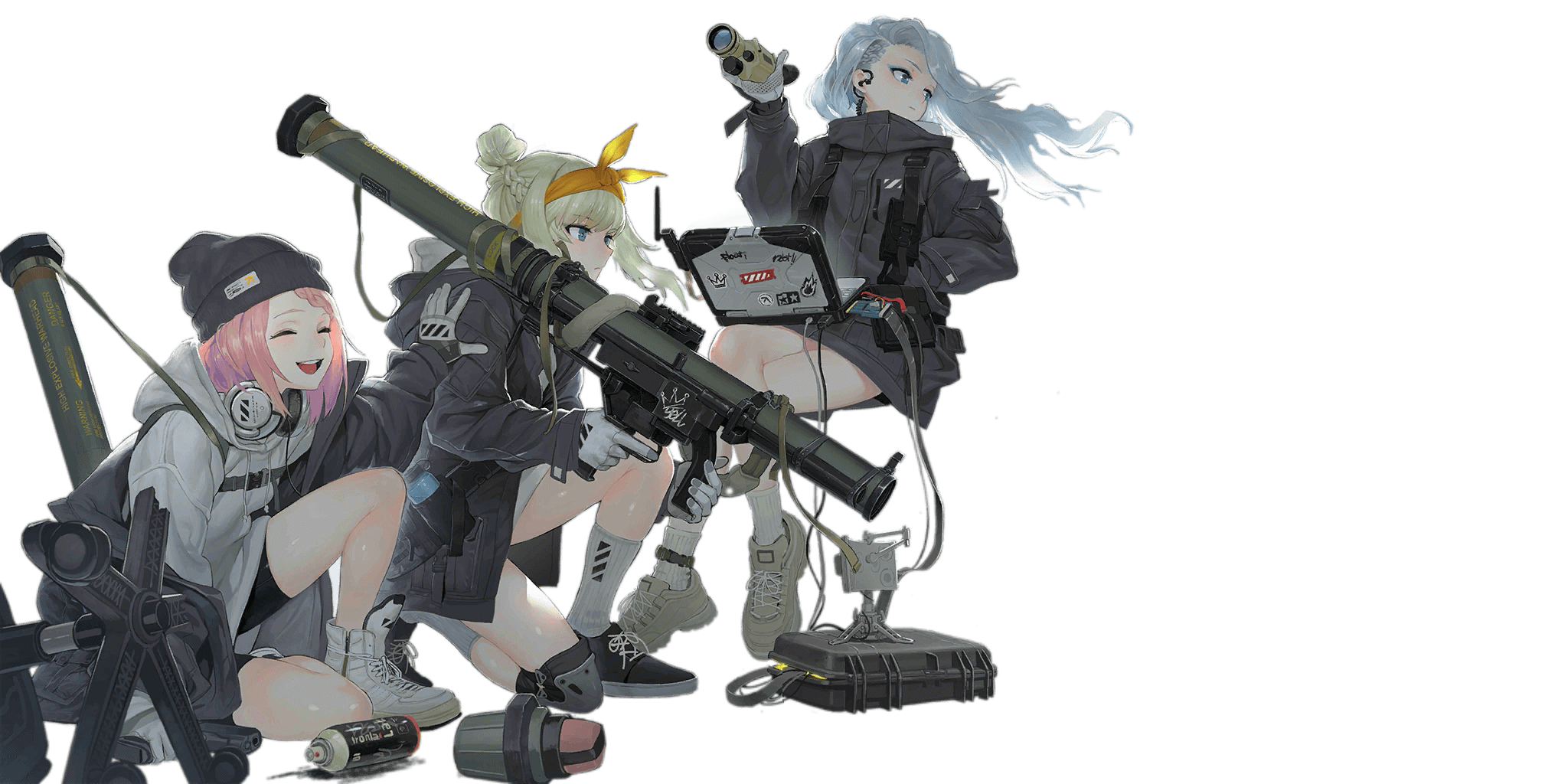 Mk 153, commonly nicknamed as SMAW, marks the arrival of the third ATW, and the first to effectively compete with vanilla HOCs, namely BGM and AGS.

Mk 153 works in the same niche as BGM-71 and AT4, and, to a lesser extent,  AGS-30 and QLZ-04: Shield Pierce. With so many HOCs working in this niche, and with HOCs being costly to level up, skill up, and deploy, it’s only expected that there would be competition among us them.

With a max of 414 Lethality, 557 Pierce, and 214 Reload, Mk 153 bears a striking similarity to AT4 stat-wise. However, while they’re both Shield Piercers, AT4’s Skills are more geared toward AoE damage, whereas Mk 153’s is geared toward high single target Damage and Shield Piercing.

Because of AGS’ and 153’s Range of 3, they compete on performing as Shield Piercers, with 153 pulling ahead against enemy compositions with few, powerful shielded enemies, due to having double the Pierce per Second that AGS has. However, against thick mobs full of low shield enemies (for example, compositions with a lot of Gunners or Rodeleros) AGS performs better as they shoot twice as fast as 153, which means they're quicker to retarget. AGS’ salvo also hit its target with an AoE, which is useful when dealing with thick mobs

When compared with BGM, they make up for lower Pierce with higher direct single target Damage, and a Range of 3 nodes, so Mk 153 will see more use than BGM, save against enemies with beefy shields, such as Bosses. At least BGM still comes out on top in the good thighs department.

Ahem Sorry to break it to you, but 2B still reigns supreme on thigh department.

Okay, but Mk 153 has good taste in spraycan.

As they are a newly-introduced HOC it is not possible to Iterate them until the arrival of Theater 6.

While AT4 didn’t exactly replace neither BGM nor AGS at the time, and QLZ failed to be a relevant HOC, Mk 153 arrives bringing a significant change to the HOC meta. Thus Commanders who acquire her should level her to level 60. Because the meta at the time of 153’s release favours the use of Mortar HOCs, namely M2 and 2B14, Commanders who have neither have them at Level 60, nor have AT4 also at Level 60 can wait to raise Mk 153 to Level 60.

Similar to AT4, Mk 153 can adequately replace BGM in most scenarios, as enemies with high Shield values are hard to find outside of Ranking. Because of her Range of 3 nodes, she can effectively replace AGS even at 1 star, at least until Commanders can acquire a 5 star AGS or acquire more Mk 153 Central Data either in either Theater 6 or when it hits the HOC pool.

However, note that Mk 153 does not quite replace AT4, for several reasons: while both share similar stats (Lethality, Pierce, and Reload) their Skill kit is wildly different; recent content has not called for Pierce HOCs as Isomer and Shattered Connexion had, which means HOCs that can deal AoE damage, such as 2B14, M2, and to a lesser extent AT4, are favored over single target HOCs.

Given Mk 153’s versatility, and bigger range, it is recommended to level her in favor of AGS-30 and BGM, as story enemies have no need for BGM’s especially strong Pierce, while being an ATW means her Pierce output is vastly superior to AGS, even when the latter has a higher rarity than 153. As AT4 scales well Pierce-wise and has a kit that lets her deal AoE damage as well, it’s recommended to first bring AT4 to Level 60 before raising Mk 153.

Note that SMAW can stun Doppelsoldners at this time.

Players should prioritize Chips with high Lethality and Pierce when equipping Mk 153.

After Pierce is maxed or nearly maxed, investing in Lethality is recommended to let Mk 153 effectively differentiate herself from BGM-71.

While Precision and Reload are less important, they can be increased if the player is able to do so with minimal opportunity cost.

Since the player will be rearranging the Circuit Board each time Mk 153 increases in rarity, it's not necessary to rotate (calibrate) Chips until she reaches 5★ rarity. Mk 153 should get the chips that have a lot of both Pierce and Lethality, with emphasis on Pierce.  It is nevertheless relatively safe to enhance Chips (even low rarity chips) so long as the enhancement fodder is of the same color since you can simply feed your enhanced chips to better chips and have most of the stored EXP (80% of its accumulated EXP) carry over.

Note that in particularly challenging fights, Mk 153's shield break will be insufficient by herself; it is recommended to bring BGM-71 for those battles, i.e. 100% shield Uhlans, Bosses, Patrollers without Taunt.

The MK153 SMAW (Shoulder-launched Multipurpose Assault Weapon) is a shoulder-fired rocket launcher made to yeet bunkers and tanks. It's based on the IMI B-300, which was used by... SF units? SF HOC??? No no, they're just Special Forces. Anyway, it was designed by McDonnel Douglas (as in, the ones who make the F-18) and was introduced in 1984 to the US armed forces. Its effective range is about 500m against a tank-sized target, as it fires unguided munitions.

It can fire a HEAT (High-Explosive Anti-Tank) capable of penetrating around 600mm of RH steel, an HEDP (High-Explosive Dual Purpose) load that seems similar to APHE for tank shells - essentially a big bullet filled with explosives. It's able to differentiate between soft and hard targets and react accordingly. Lastly, there's a SMAW-NE (Novel Explosive. Very descriptive, I know.) which fires a thermobaric warhead that can collapse buildings, caves, things like that. It was first used in Iraq in the early 2000s. Oh, and there are Training Rounds. The load is replaced with a blue plastic projectile which releases white stuff on impact.

Compared to the B-300 it is based on, the projectiles are slower, the launcher and ammunition are heavier (2nd crewmember required to keep the fire rate comparable to the B-300's) but has a longer effective range. The tube has an inside diameter of 83.5mm and fires 83mm rockets. It comes with a spotting rifle so you don't waste a rocket ranging it in, or remain stealthy for a little while longer. It's made of fiberglass, with a special coating on the inside to reduce friction or prevent heat damage. The launcher is rear-loaded as per tradition.

When firing, the backblast of the rocket extends to 90m behind the launcher, in a roughly 60-degree wide cone. At 30m or closer, it is lethal unless wearing a substantial amount of armor, however even at 90m away it is still dangerous. The assistant gunner/loader is often tasked with checking the area behind the launcher, as well as warning friendly troops or notifying the gunner of obstacles behind them. Said gunner is only allowed to fire the launcher when the assistant gunner confirms the area behind is clear. This also means that the SMAW cannot be fired indoors unless you find yourself in a massive, wide-open building.

The original, Mod 0 SMAW showed several shortcomings which were fixed in the early 2000s, on the Mod 1 variant: The launch tubes would gain bubbles, and manuals were rewritten for better use. Better insulation of the electric-mechanical trigger was also done, along with an optical sight allowing for a small degree of magnification, and easier use against moving targets.
The Mod 2 replaces the spotting rifle with a laser rangefinder-based ranging system, along with a thermal sight. It has a little reticle to aim for to hit the desired target. The Mod 2 also saves on weight considerably, from 7.5 kg with the mod0 to just 5.9kg in the Mod 2. It can be brought down further to 3.9 kg if the thermal sight is ditched in favour of iron sights. It also has a better grip, a decent quality of life improvement.

The SMAW is used by the US obviously, but also by Taiwan, Lebanon, and Pakistan's armed forces.

Overall, the SMAW is basically a modern bazooka. Not much else to it, just an unguided, shoulder-fired launcher.