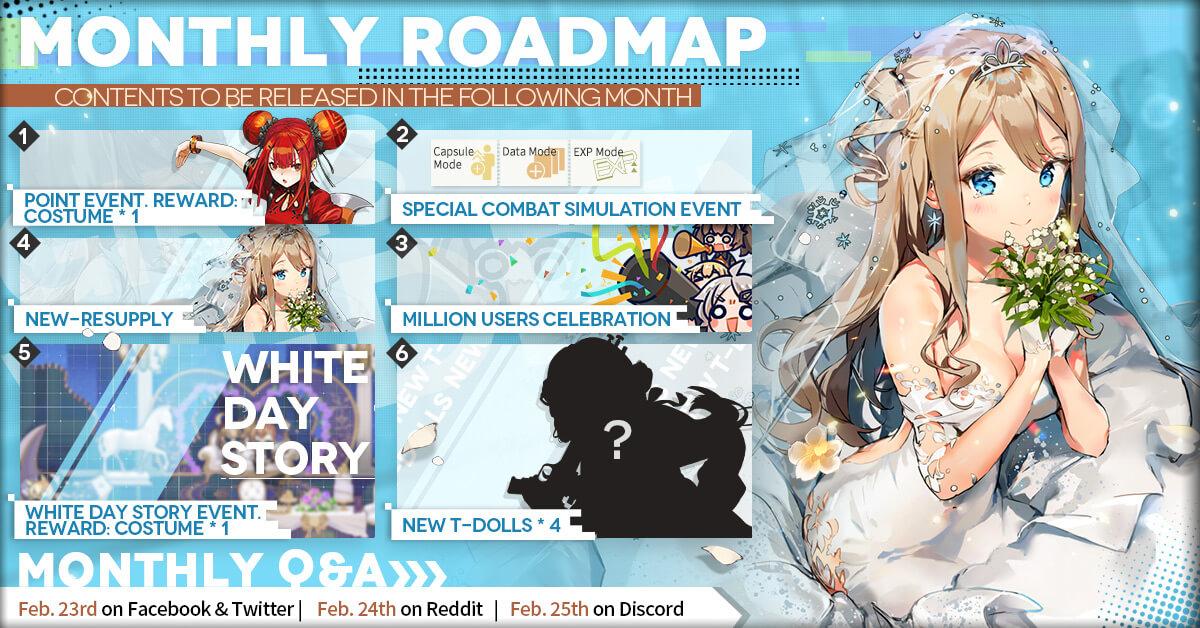 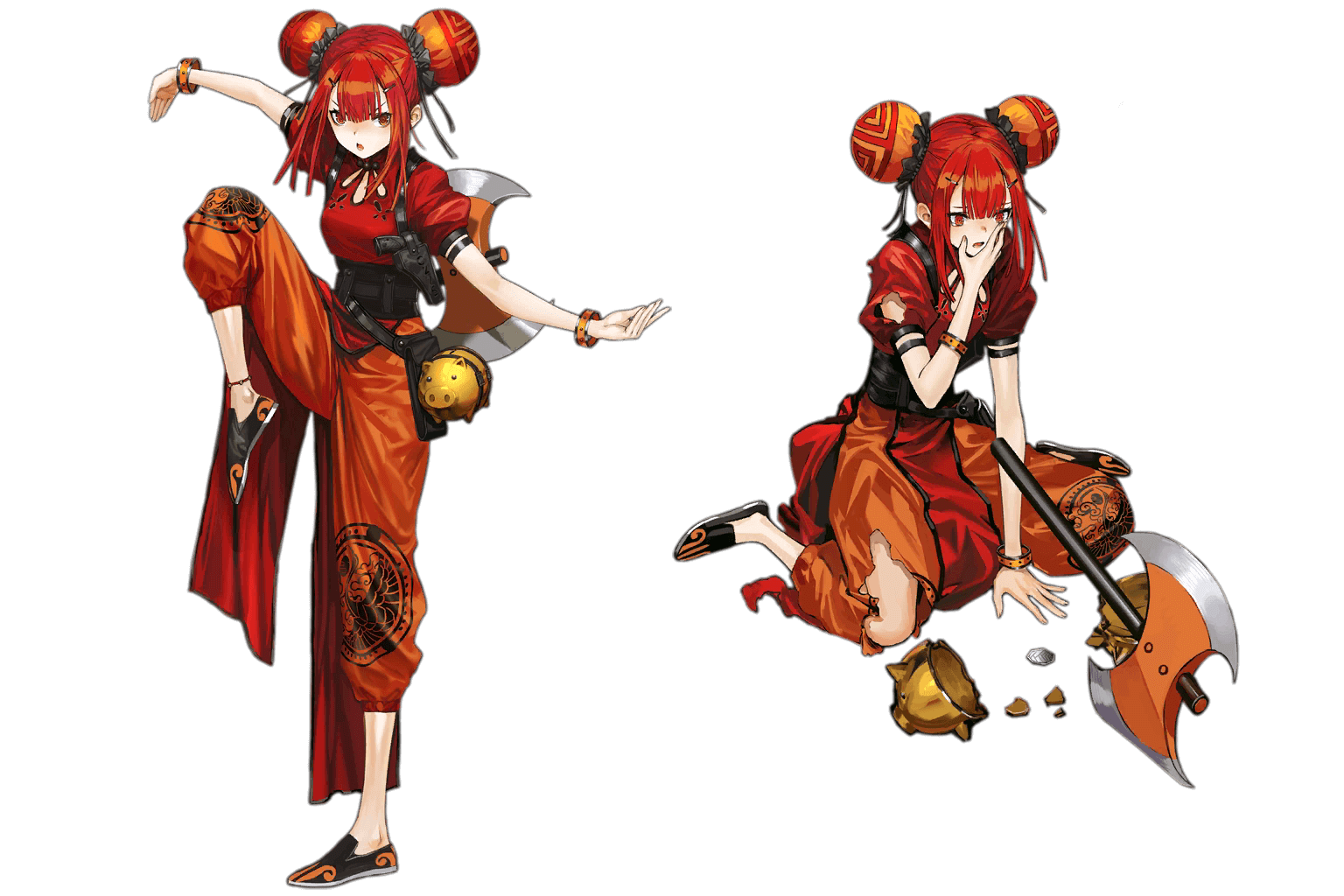 The mechanics of this point event will be very similar to previous point events, where the player completes certain objectives for points over a three-week period to earn various rewards; one example of a previous point event is the SRS event, whose full details including quest list and rewards can be seen in the page linked below.

This event is most likely going to be exactly the same as the previous event involving combat simulations, which meant opening all combat sims every day of the week. 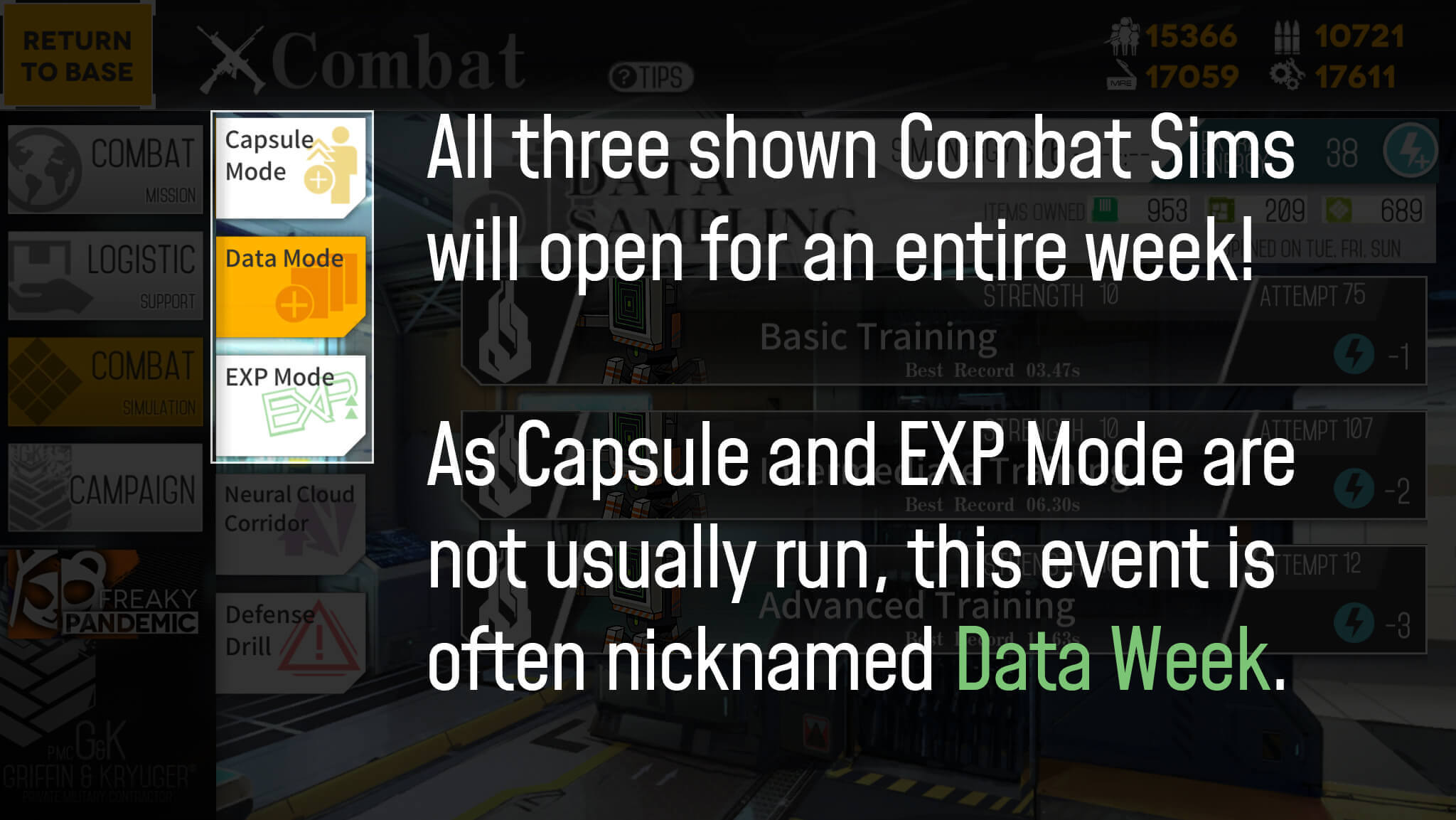 Players are highly recommended to run Data Mode only for the duration of this event.

GFL EN has reached 1 million users! The celebration event details have now been revealed on the Official GFL EN Twitter - check it out below!

Retweeting and asking questions will enter you into a drawing for gems or a merch package! Submission period lasts between Mar. 6 - Mar. 13, so don't miss your chance to ask up to 3 questions!

The form to fill out as well as the instructions are included in the tweet thread.

Players unable to load the questionnaire form from the tweet can try this link instead.

Additionally, a login event will grant players access to the a new 3-star SMG, T77. 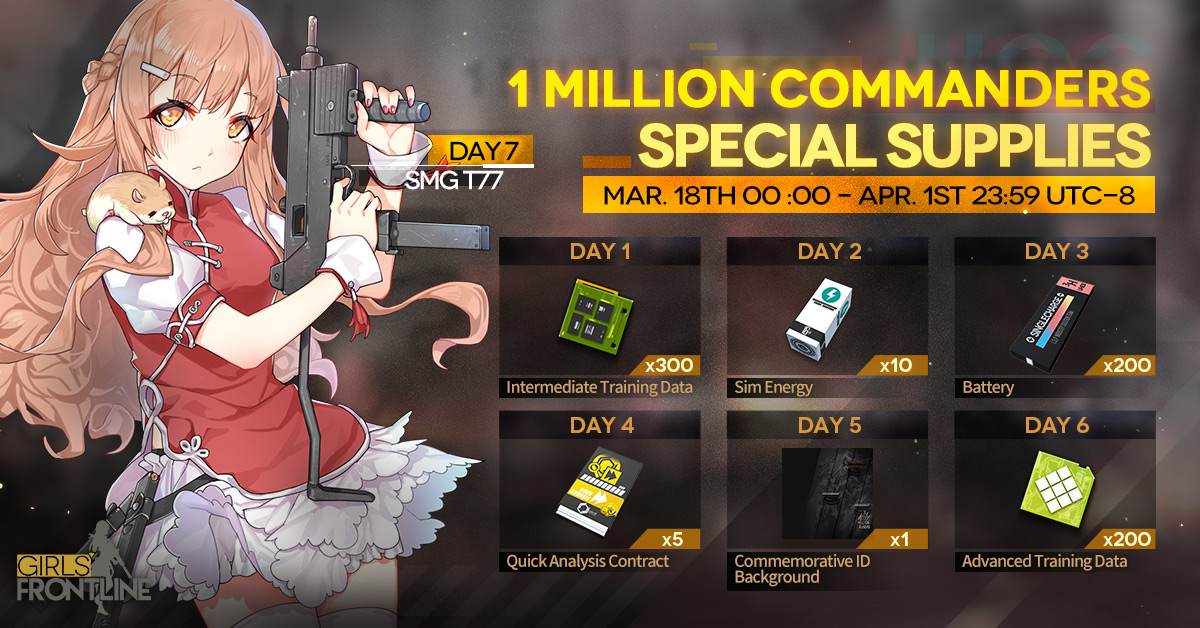 This is yet another Costume Re-Supply Gacha, this time featuring the Wedding Costumes released in CN in 2019.

The much-anticipated Live2D costume for Suomi is prominently featured, though many others are in this re-supply banner as well. 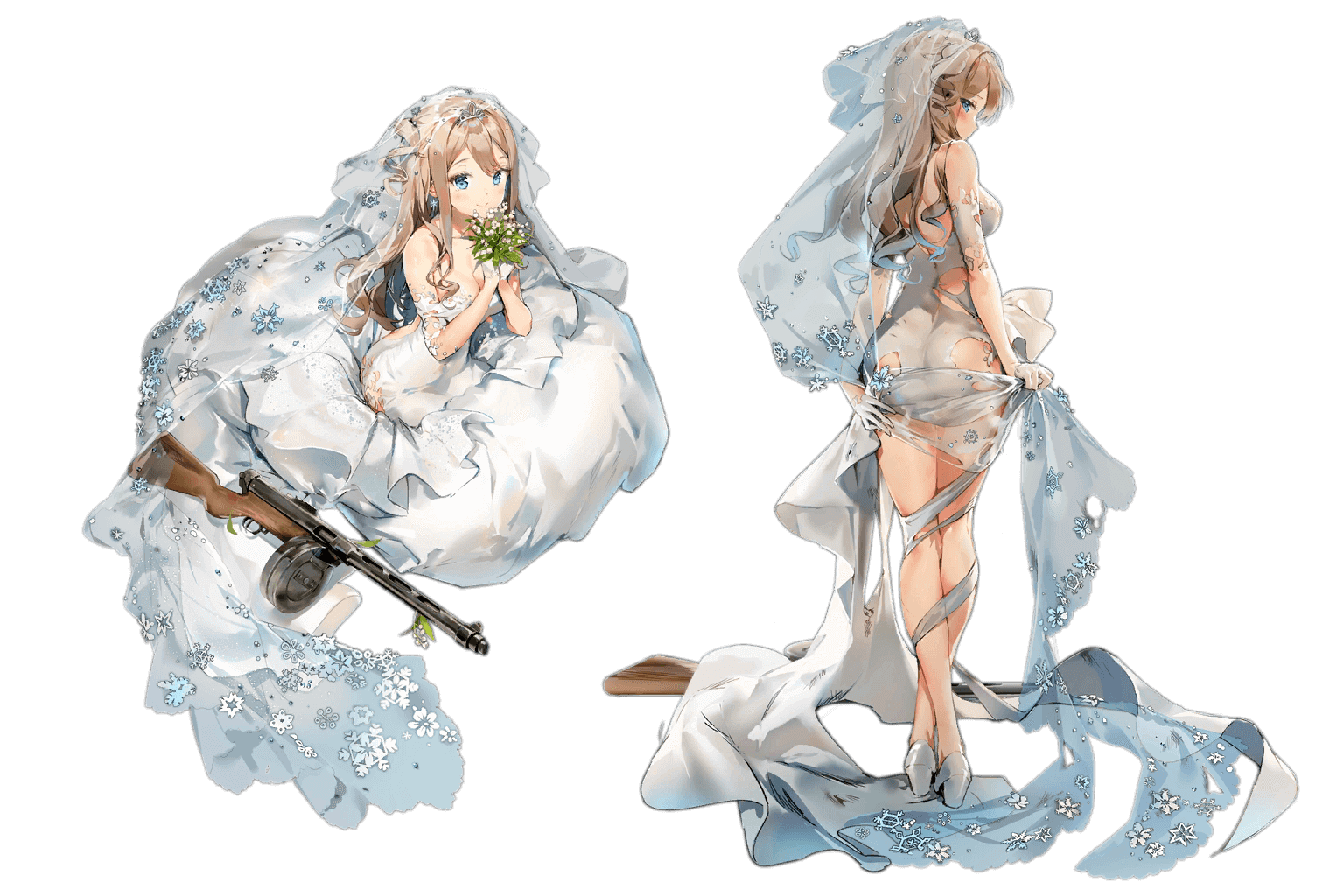 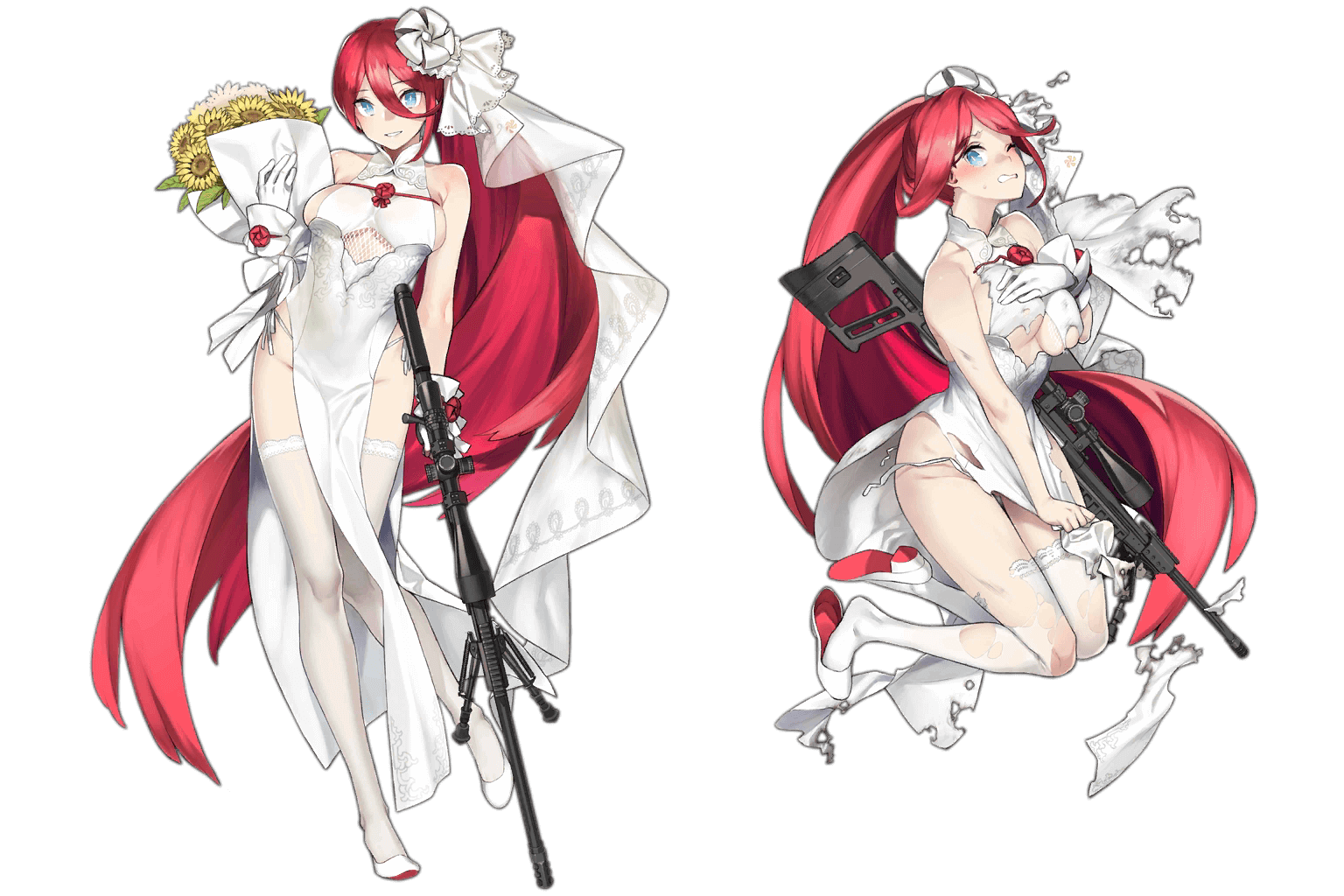 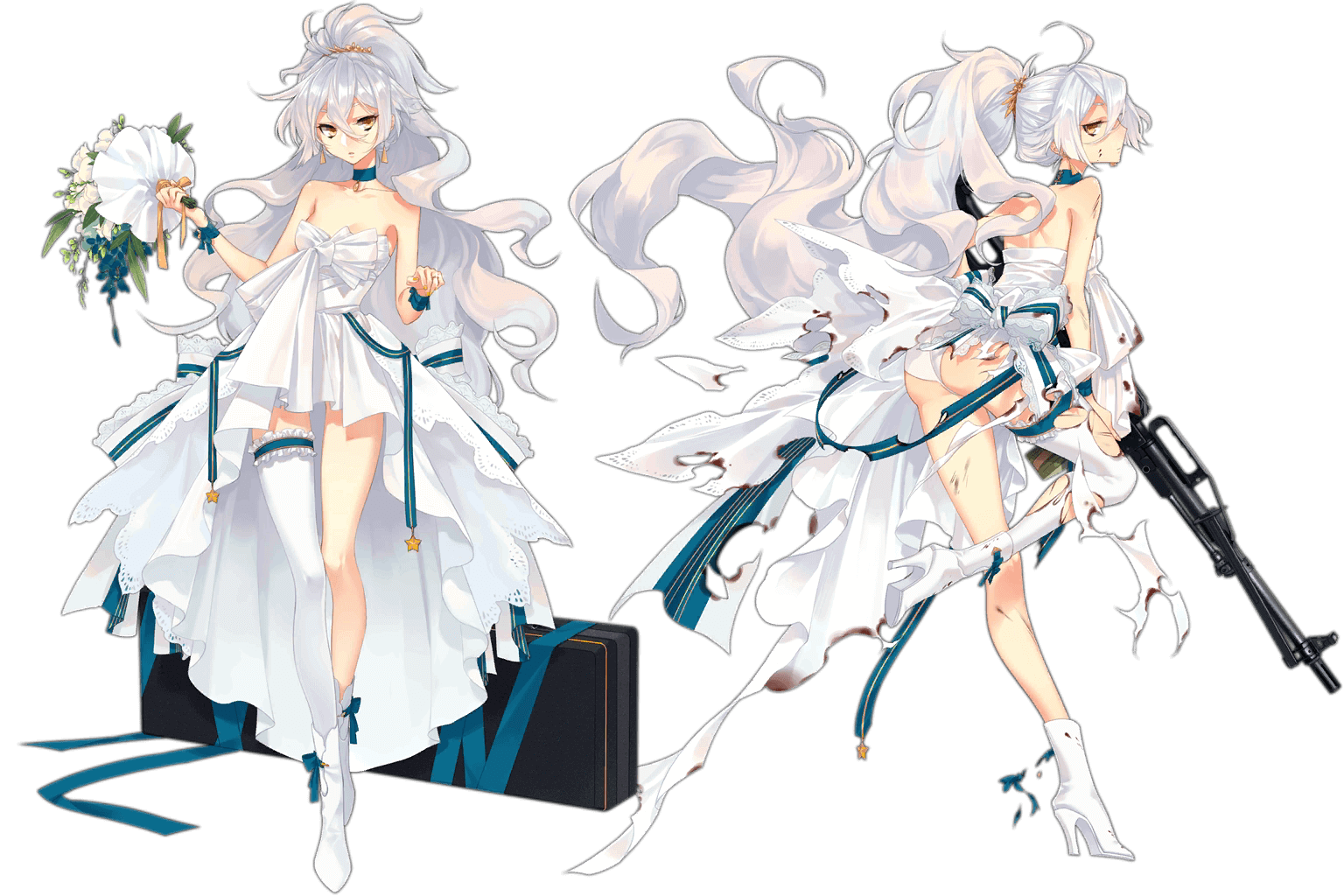 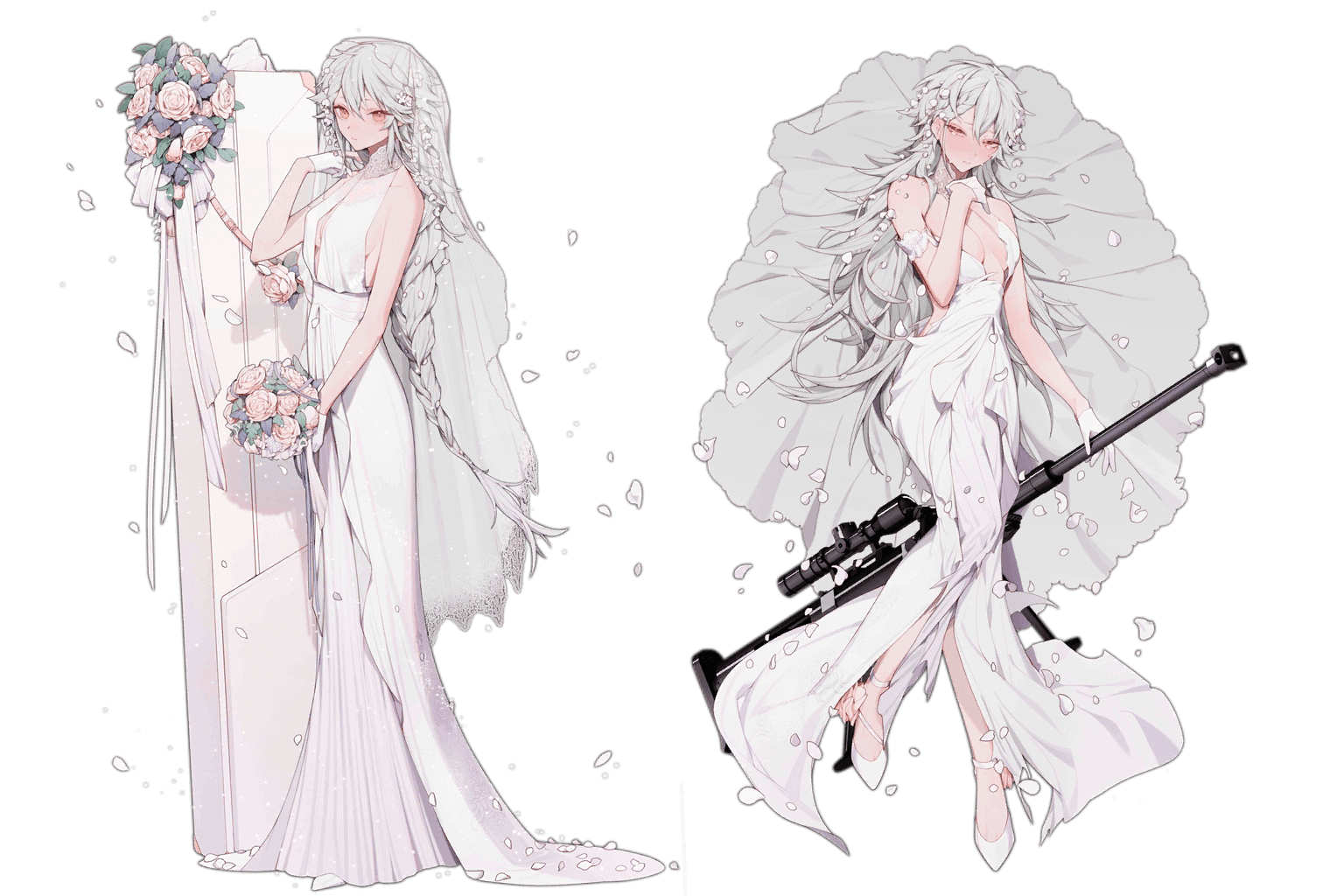 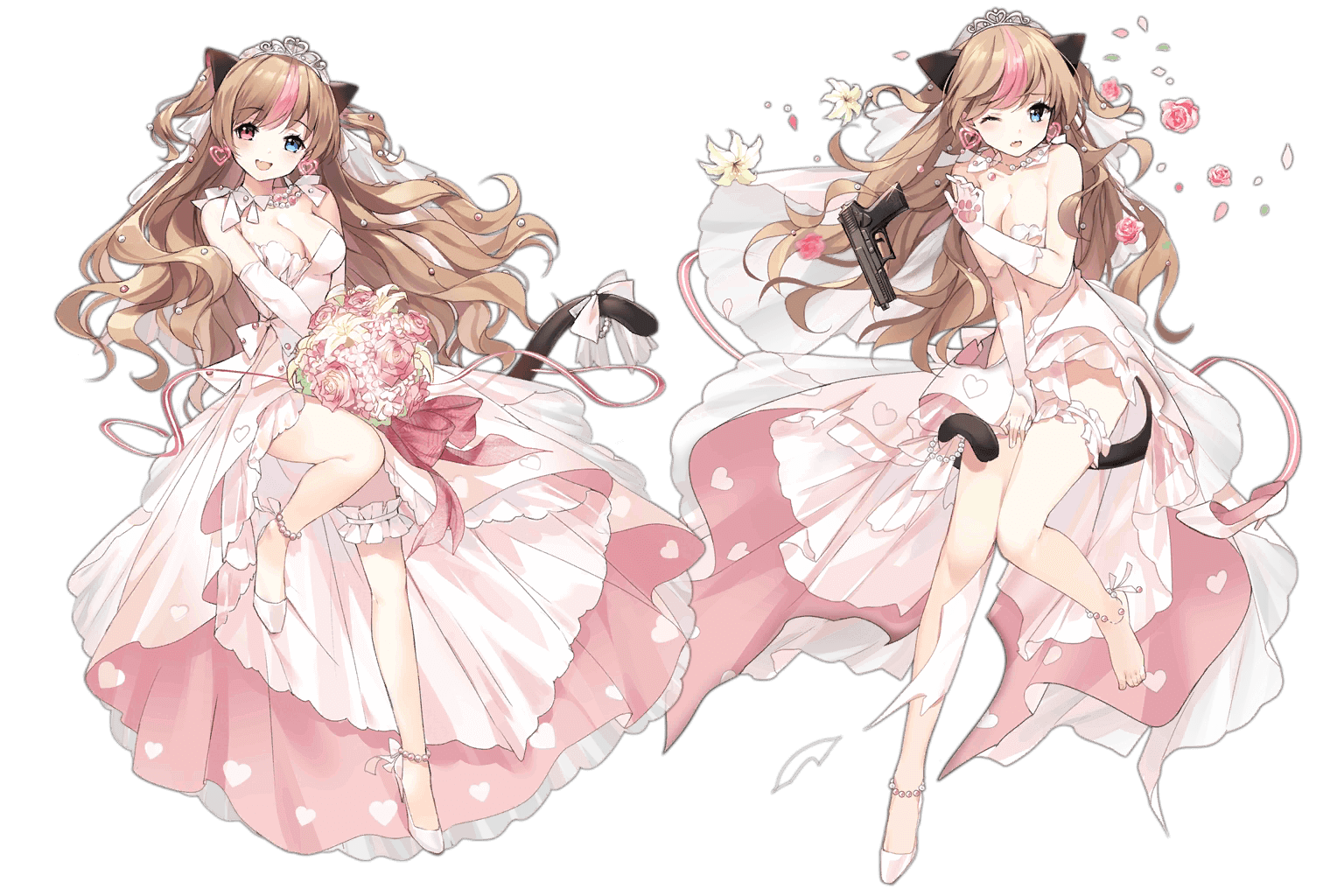 G36C's Weddling bundle costume will also be available for purchase with Gems during this Re-Supply. 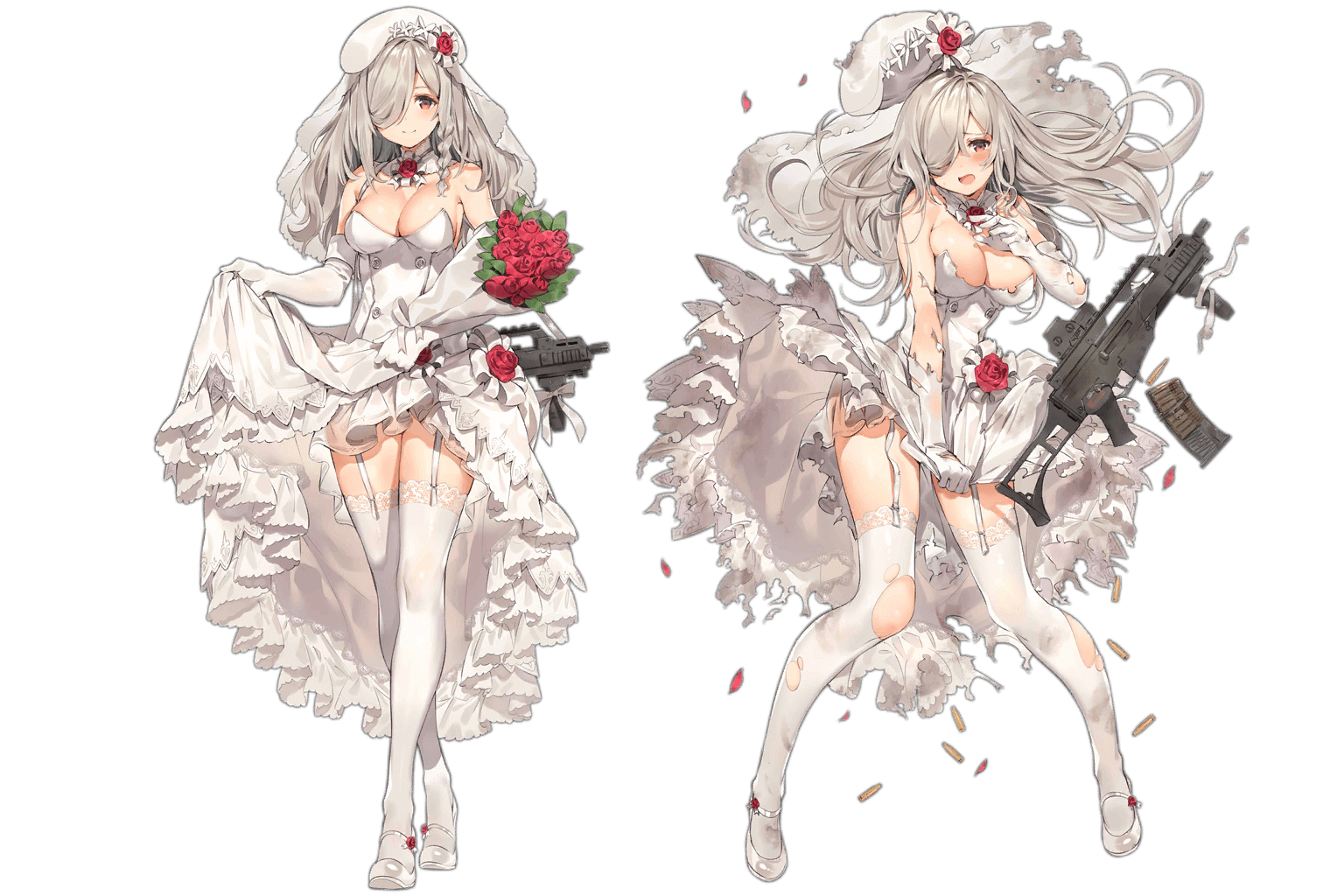 The White Day Story Event is an all-new event that will likely be similar to the Halloween Story Event and Christmas Story Event, consisting of a few maps alongside a short story and an event shop. Check out the official EN trailer below!

Additional event information can be found in the Event Info page linked below. 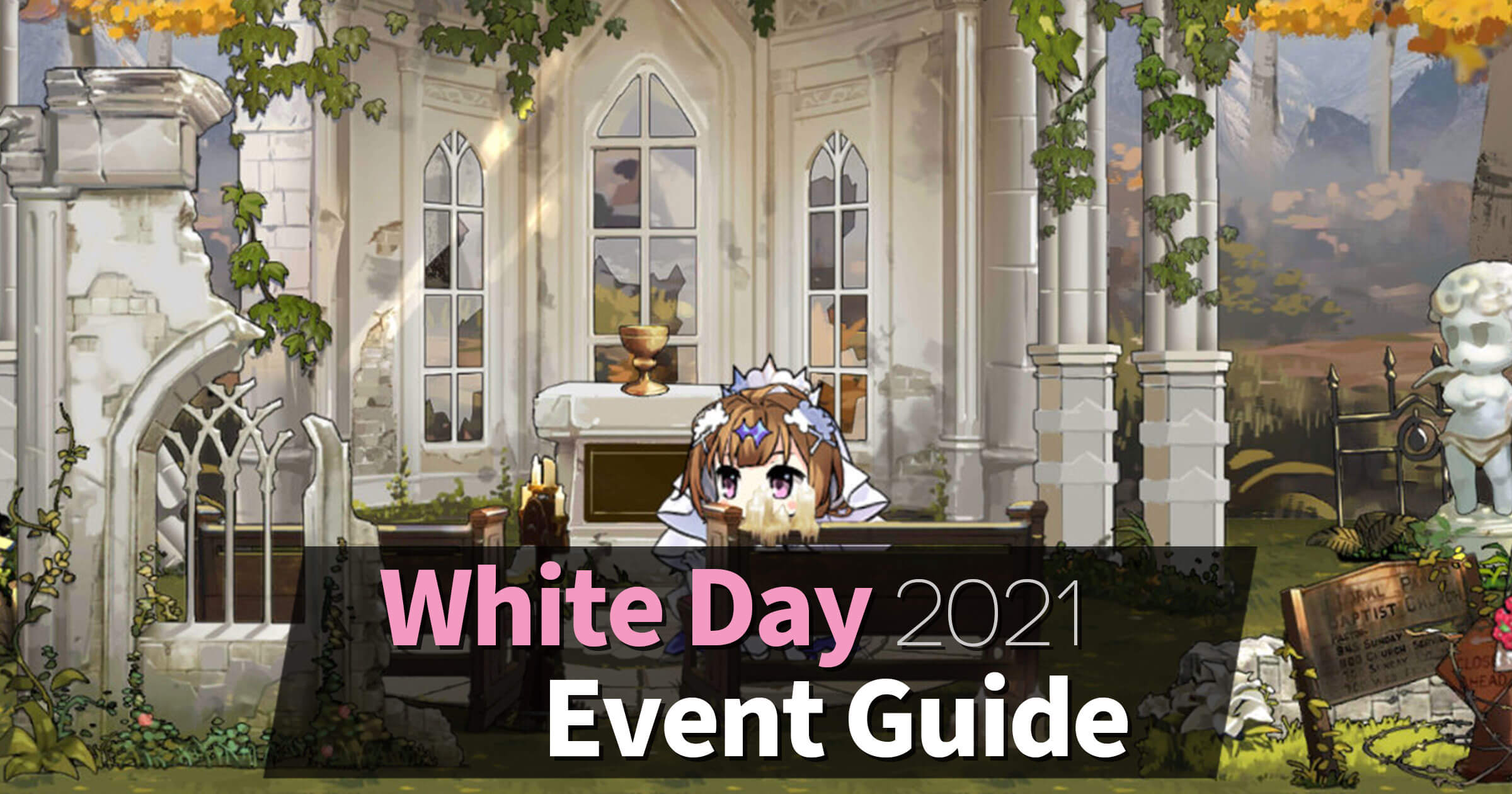 A new batch of T-Dolls will be released in March! The silhouette matches that of QBU-88, though the other three T-Dolls in this batch are as of yet unknown. 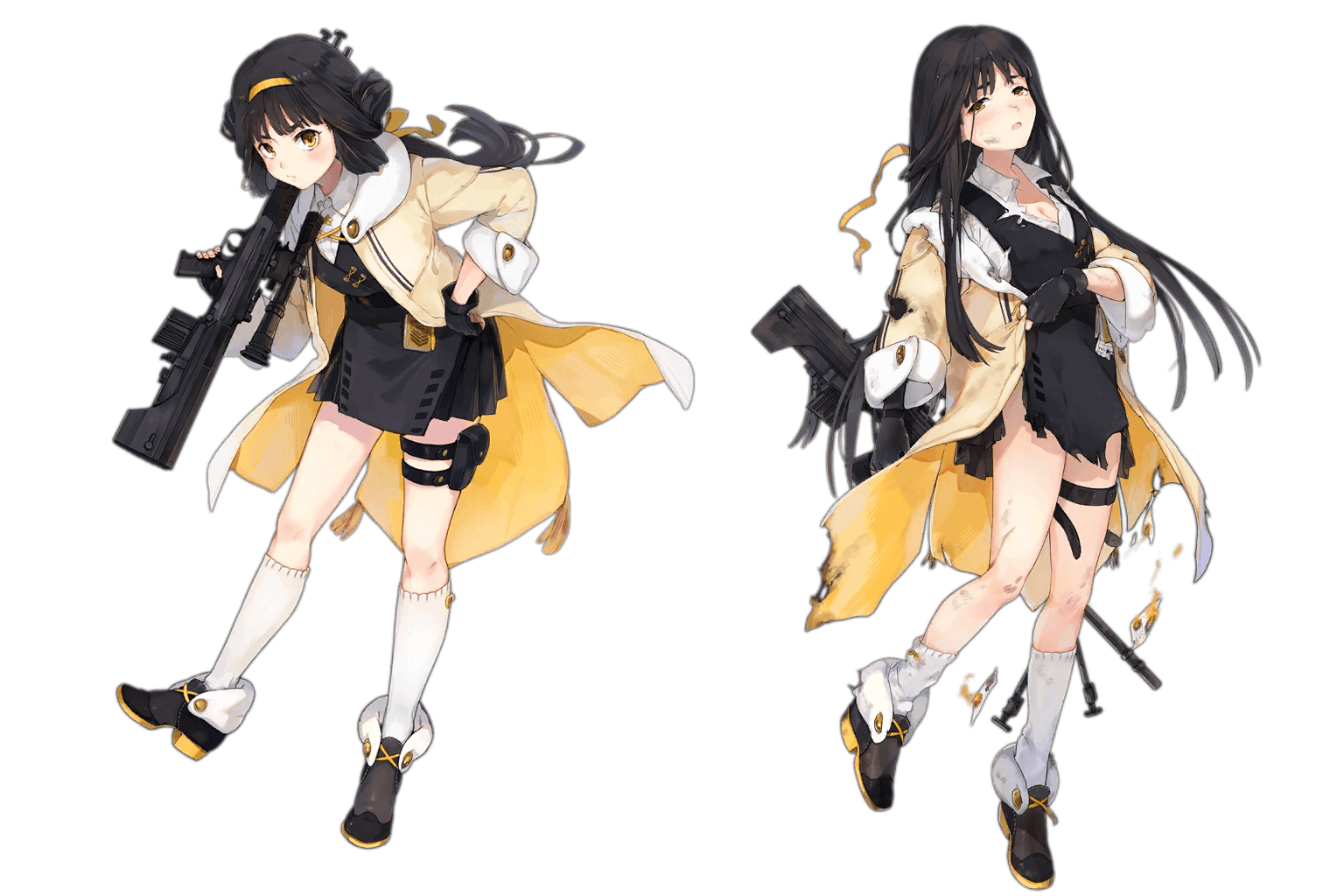 QBU-88 is a very interesting RF whose unique niche of AoE damage is expected to be a force to be reckoned with in the next story event, Isomer.

EN players are suggested to try crafting her if they have no other pressing T-Doll production priorities, as she's quite a fun T-Doll to use and will be strong in the foreseeable future.

03/12 update: Due to the twitter announcement of ADS, it's now speculated that GFL EN may get the the ADS batch (plus QBU-88) instead of the other units previous speculated to release. The ADS batch includes the following T-Dolls:

Unfortunately, aside from QBU-88, the remaining 3 T-Dolls are not known. The most likely guess would be T-Dolls released in the same CN batch as QBU-88's initial introduction, as per gfwiki's April 2019 changelog: 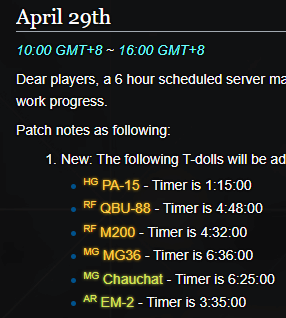 Since M200 already exists in EN, it's likely that three of the other four T-Dolls (PA-15, MG36, Chauchat, and EM-2) will be added to this batch instead.

2/21 update: As GFL JP is getting the following banner, it is most likely safe to assume the four GFL EN release T-Dolls will be: 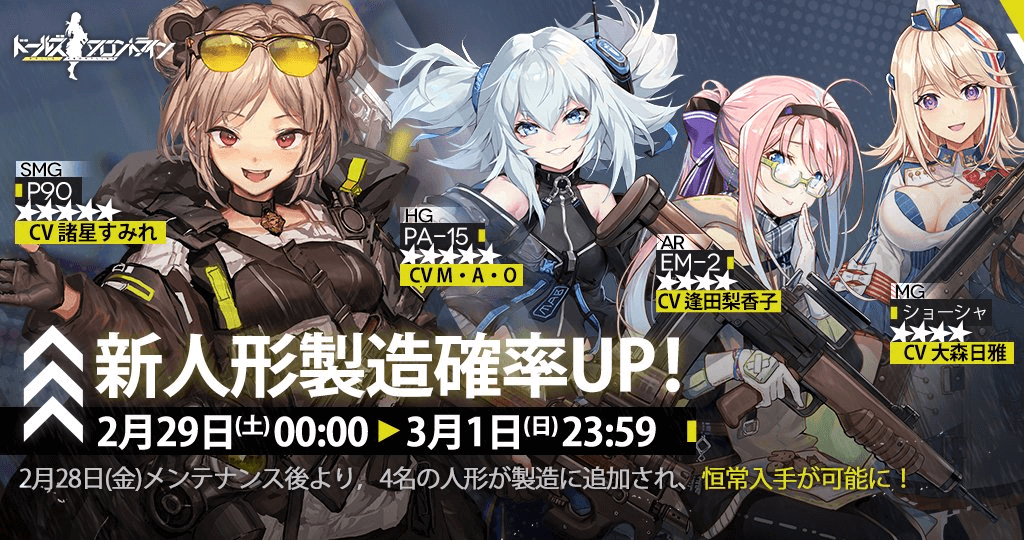 It's not entirely set in stone (JP did have some T-Dolls like JS09 released for months when they have yet to be seen on CN), but this is the best guess currently available.