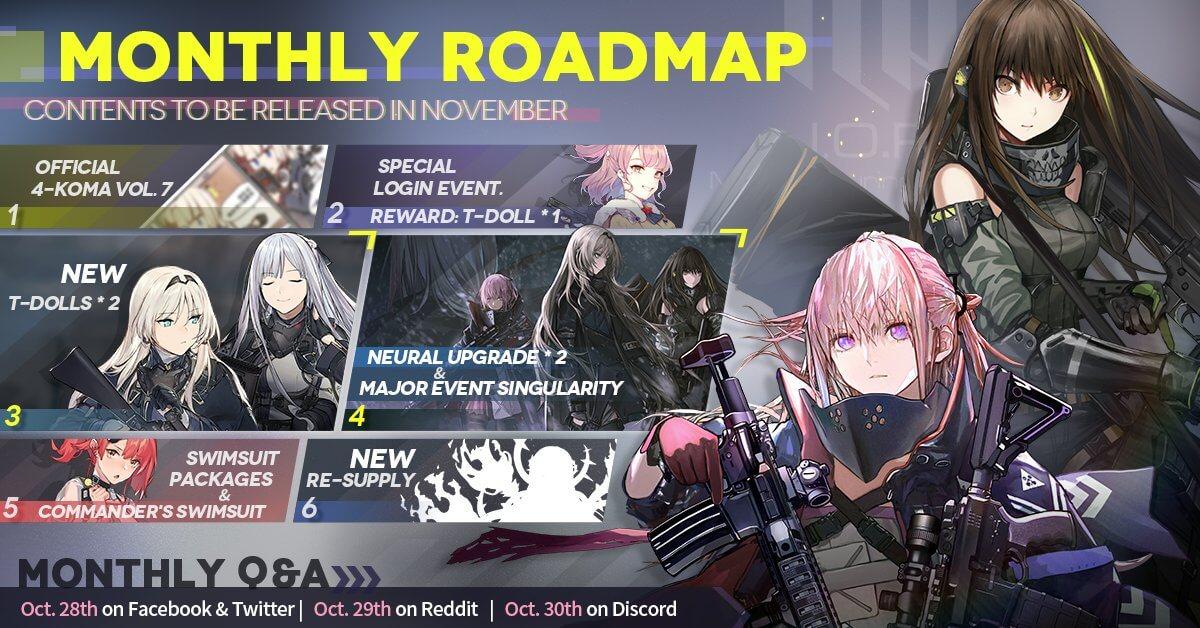 MICA Team has released the November roadmap for the EN Server; here's a quick look at each of the items teased by the developers:

This is the seventh installment of AC130's official Girls' Frontline 4-koma, which will become available in the Cafe's Comic Book Stand for 600 batteries.

When ten volumes of the 4-koma are released, Commanders who have purchased all ten will receive GSh-18's "Walking Operating Table" costume. While this is far off in the future, it doesn't hurt for commanders with excess batteries to start buying the comics now when the resource is plentiful with few applications beyond infrastructure upgrades. 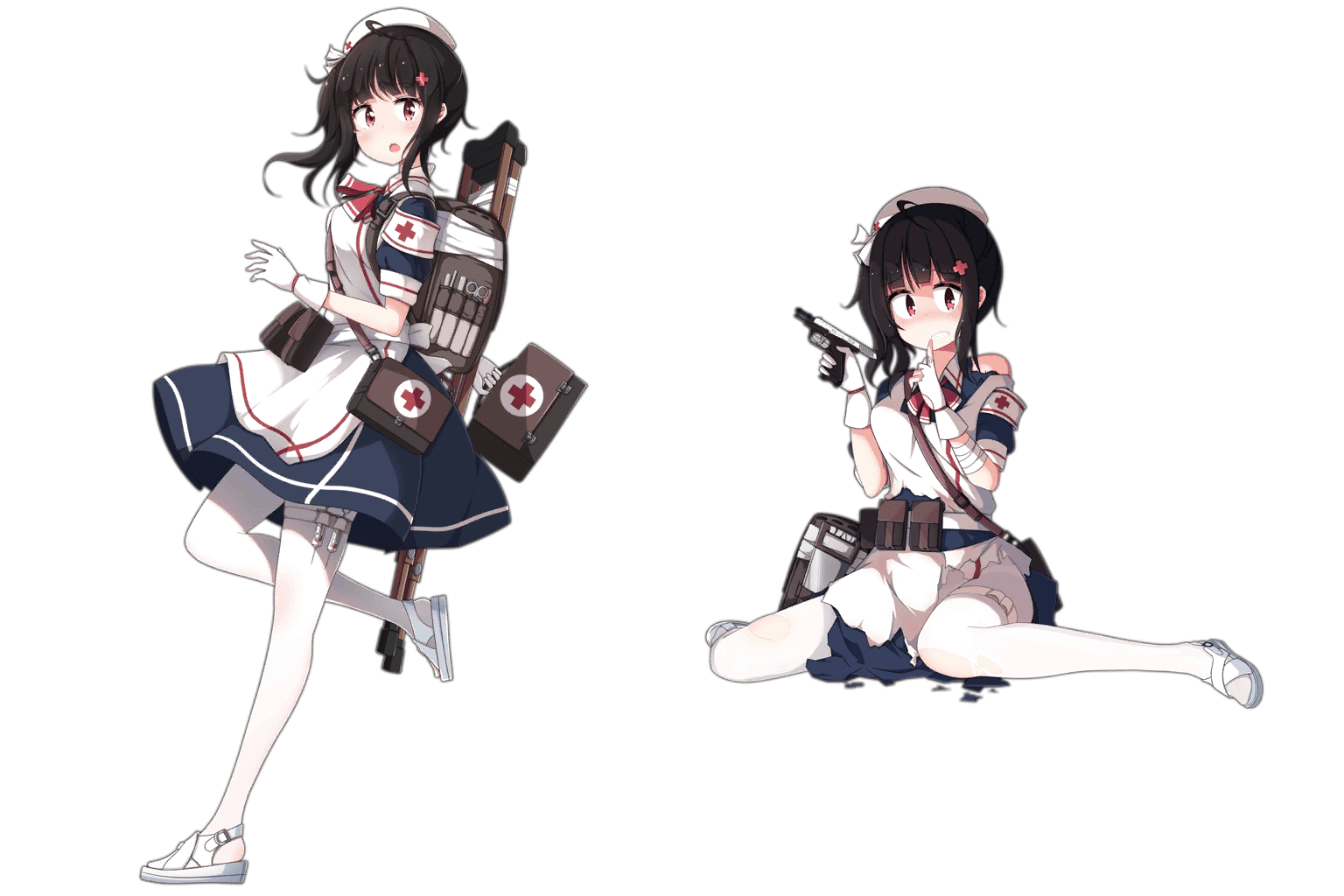 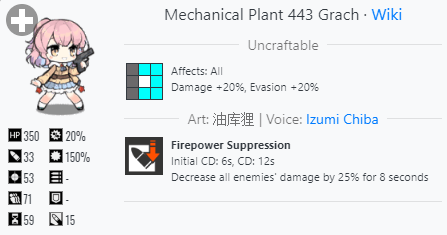 As the Halloween Event will remain ongoing for the first half of November, the roadmap will necessarily be padded by filler events like this one. Similar to other login events, this will be a simple "login for free stuff" campaign lasting a week.

While her tiles are passable, MP-443's Skill is a debuff that typically will not be very effective in ARSMG or RFHG echelons. For MGSG echelons that can benefit a lot more from % damage reduction, M1895 outperforms her at night and offers a stronger offensive tile buff.

All in all, MP-443's kit is fairly niche, meaning she is not a priority unit to level or train for Commanders that need strong HGs.

The last analogous event on EN took place during the Neural Upgrade feature release, and awarded P226. The rewards for this event will likely be very similar, except for the T-Doll. 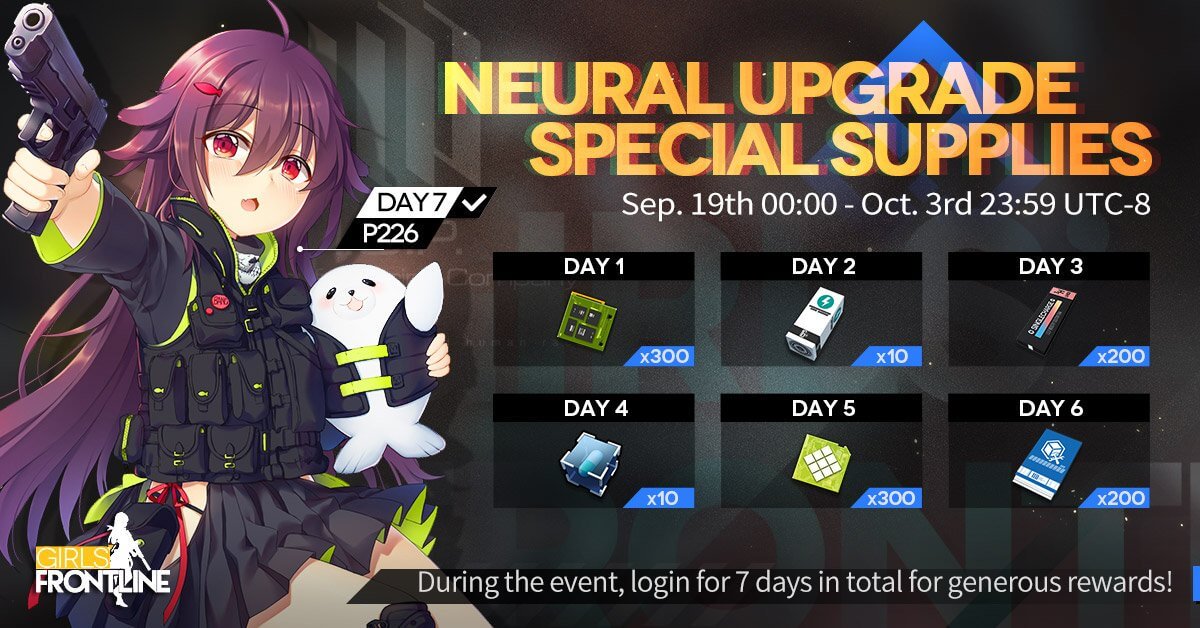 The two new T-Dolls are the much-anticipated members of Team DEFY, the Slav Sisters AK-12 and AN-94. They are exceptionally strong T-Dolls with amazing kits, thankfully both dropping from the AR recipe.

AN-94 is anticipated to be more common with an estimated 0.6% craft rate, with AK-12 being far rarer at 0.2-0.3%. Thankfully, these odds will be roughly doubled during a rate-up event, one of which will follow the release of AK-12 and AN-94. 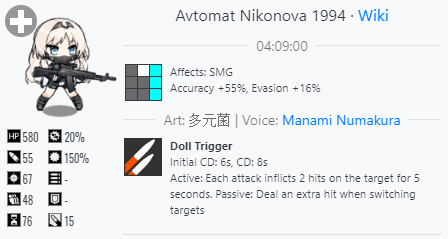 AN-94's skill may appear at first glance to be a worse version of G11's Eye of the Assaulter, but nothing could be further from the truth.

Not only do AN-94's far-superior base stats enable significantly higher per-hit damage output, but her skill's passive component is active from the very start of battle, allowing AN-94's pre-6s DPS to far exceed that of other ARs, especially in situations where enemies die quickly enough for her to switch targets every shot or every other shot.

The Skill's active portion is nothing to scoff at either, with a low cooldown of 8 seconds that allows it an impressive 10/16s uptime compared to G11's 4.5/16s. While G11 may deal more burst in very specific scenarios, AN-94 will typically demonstrate far better general performance against non-boss enemies.

AN-94 can benefit effectively from any offensive tile or Skill buff, as both Damage and Rate of Fire increase the effectiveness of Doll Trigger's Passive and Active components, allowing it to proc more often and clean up enemies effectively.

AN-94's only drawback is the lack of a Damage-boosting tile buff, but since it provides an impressive 16% Evasion and 55% Accuracy boost to both frontline SMGs, it's still quite decent.

Tip: Considering AN-94's tile buff, she should ideally be placed in position 7. When teambuilding, avoid matching her with other ARs that would like to be placed on position 7 such as G36, G11, MDR, etc. 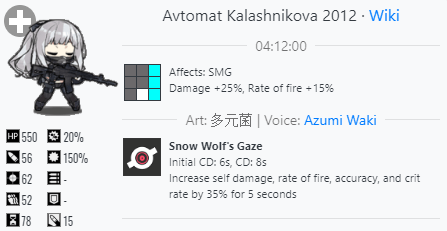 AK-12's impressive base stats combined with her almost Godlike skill already make her one of the best ARs available, even when contending with the impressive selection that GFL EN already has. Add the fact that AK-12 is the first AR that can be placed in tile 1 and still buff the position 8 SMG with Damage, and there's almost nothing about her that's worth criticizing.

AK-12's Skill is an extremely powerful DPS boost with excellent 10/16s uptime. While the multiplier of 35% may not seem like much, it boosts four stats that all contribute heavily to DPS, making it a far stronger skill than almost every other self-buff available to ARs.

Its initial cooldown of 6 seconds does mean AK-12's burst damage takes a while to come out, although the offtank SMG can often soften up the enemy vanguard with their AoE burst in the first few seconds, helped by AK-12's Damage-boosting tile buff.

To use AK-12 effectively, avoid pairing her with too much Crit Rate or Rate of Fire buffs as she comes very close to their respective caps from her Skill alone, reaching 91% Crit Rate and 105 RoF at max Skill Level.

While AK-12 and AN-94 have similar single-target sustained burst due to their skills both roughly doubling DPS, AN-94 is much easier to buff due to not having the same stat cap considerations that affect AK-12. AN-94's Doll Trigger also has a passive portion that adds considerable additional damage pre-6s, whereas AK-12 lacks such a luxury.

The Crit Rate boost is useful during daytime but not as strong at night due to the low 20% base Crit Rate of ARs. Nevertheless, it is still free damage and can be appreciated.

The main story reward T-Dolls, M4A1 and ST AR-15, will finally receive their Neural Upgrade as part of the upcoming Singularity Story Event! 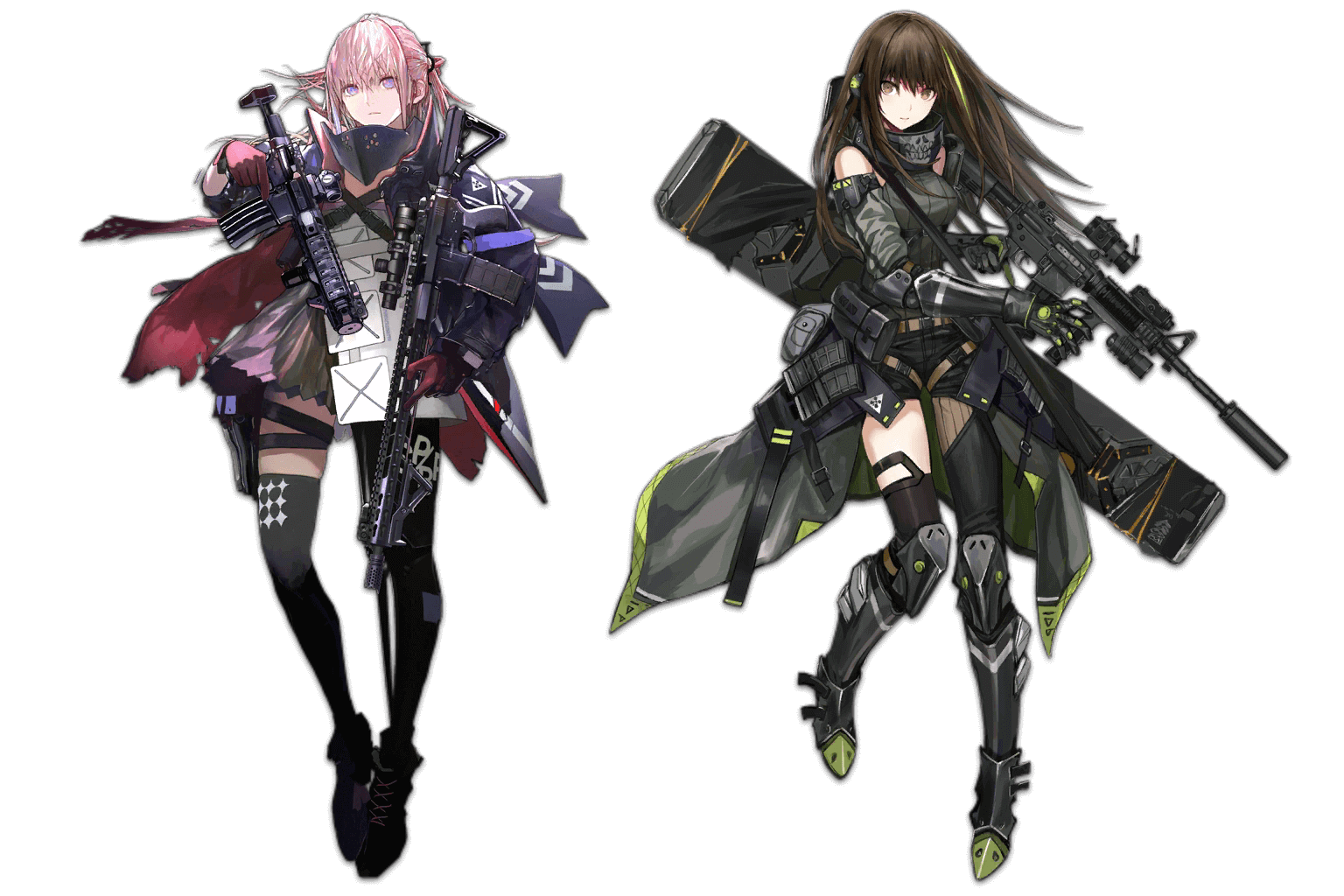 Please check out their Mod stories at the Cafe's Coffee Machine when the event drops! 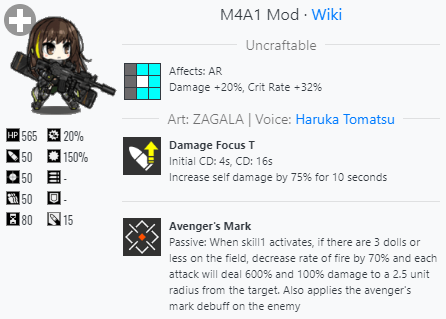 Avenger's Mark turns M4A1 from a single-target rapid-firing AR into an AoE damage cannon if 3 or fewer allied T-Dolls exist on the field at the time M4A1's Damage Focus T activates. The damage output is crazy, although only the AoE portion can critically strike.

This effect can be forced by retreating two units from the echelon.

M4A1 is typically paired with very unique teams to take advantage of her special Skill - for more details, stay tuned for the upcoming guide! 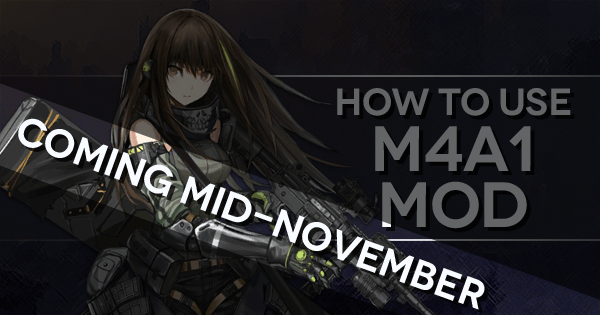 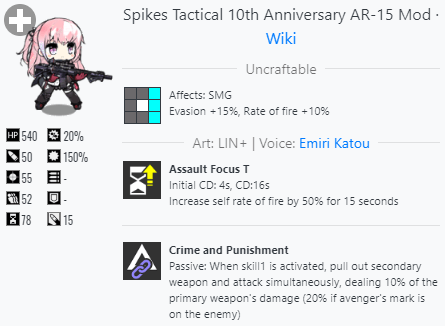 ST AR-15's Neural Upgrade is a bit more straightforward, being a fairly simple-seeming addition to her already-impressive damage output. The additional shot will bypass Dummy Link Protection in a similar fashion as K2's triple shot, although its significantly reduced per-hit damage limits the overall effectiveness of this quirk.

While there is some synergy with M4A1's Neural Upgrade, it's not entirely necessary to always pair them together, as ST AR-15 is great on her own as one of the best sustained DPS ARs.

While players with limited Memory Fragments should spend them on M4A1 first, ST AR-15's Mod II is the next priority. Save up 1200 Memory Fragments to upgrade ST AR-15, then budget the remaining as desired.

Tip: ST AR-15's Skill II, Crime and Punishment, can be left at a low Skill Level without significantly affecting her final damage output. SL1 offers a 5%/10% boost, while SL4 offers a 7%/14% boost. This is not too much lower than the SL10 10%/20% boost, and is much lower in Training Data requirement.

For a more detailed analysis of M4A1 Mod and ST AR-15 Mod, please check out the Neural Upgrade Doc by Girls' Frontline Corner below.

The next Major Story Event, Singularity, will finally arrive on EN!

The Ranking Map, Hornet's Nest, is one of the most interesting Ranking maps in Girls' Frontline and will require substantial preparation for a Top 100 spot. The rewards of Kar98k's Special Equipment and the Cooking Fairy are not too special, although Kar98k's upcoming Skill rework does make her a far more attractive option as an early-burst RF.

More casual players can thankfully still make it past the 50% reward cutoff for the two rewards with a few teams; please see the below video guide by Ceia for more details on how to prepare for the Ranked stage!

For the story campaign portion, Commanders with a few endgame echelons at Level 90, x5 Dummy Linked will generally be ready to fully clear the event.

Ceia's Singularity Preparation Guide also covers this in depth, so please check it out if you're looking to prepare for the event!

As the swimsuit gacha containing the teased costume for MP7 was already released on EN without the unreleased T-Dolls, it's not entirely clear what's going to be in this set of packages aside from what's shown in the roadmap. 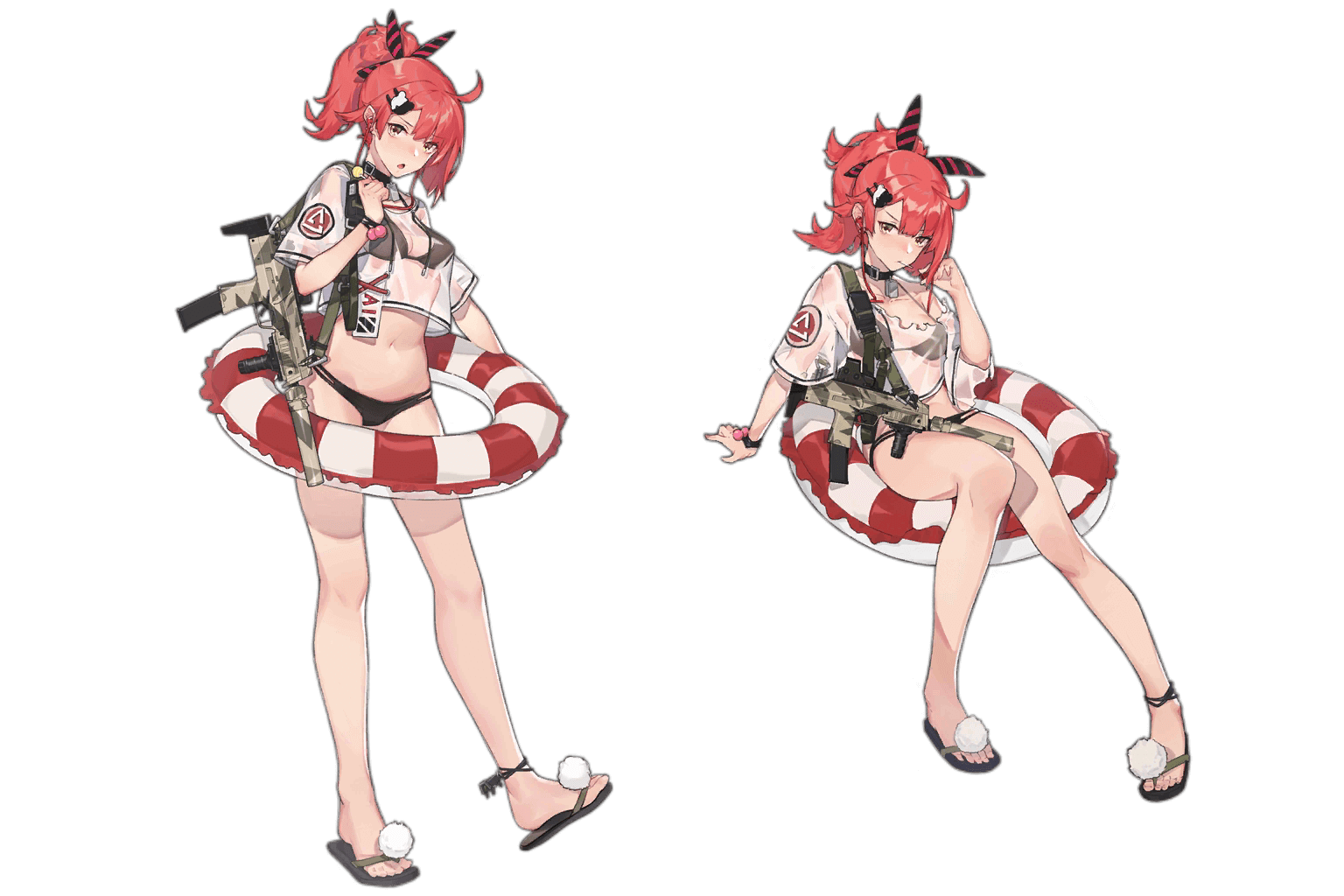 Besides MP7's beachwear bundle at 2588 gems for her costume + 1 Oath Certificate + 100 Tokens, it is likely that AN-94's 1999 gems bundle with her costume + 100 Tokens would be included as well. There's a small chance that either the Re-Supply would make a comeback or that AK-12's costume would be bundle-ized instead, although until MICA Team announces it formally, the details will be in flux.

Oh, and there's a new Commander Costume set up for purchase. 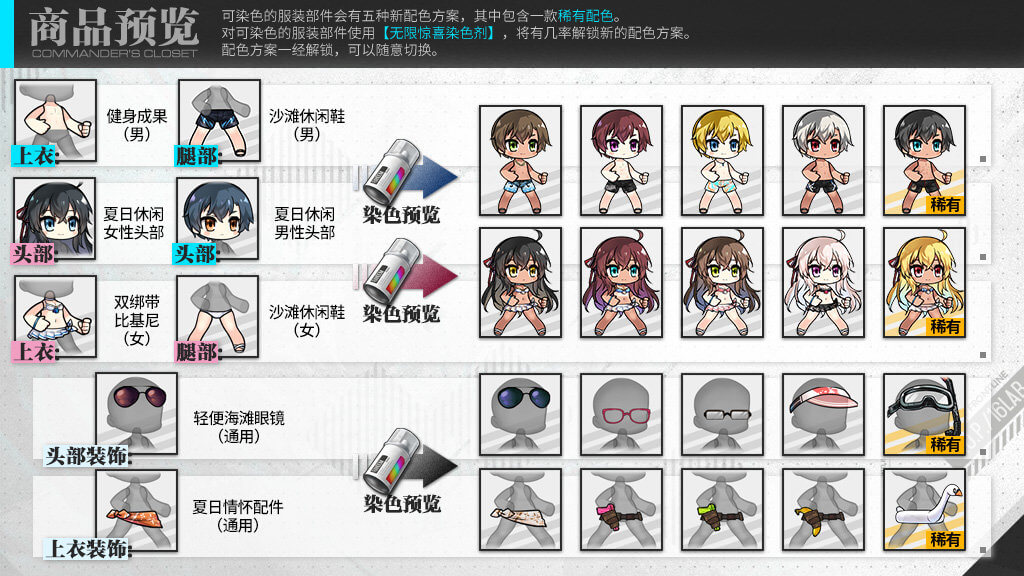 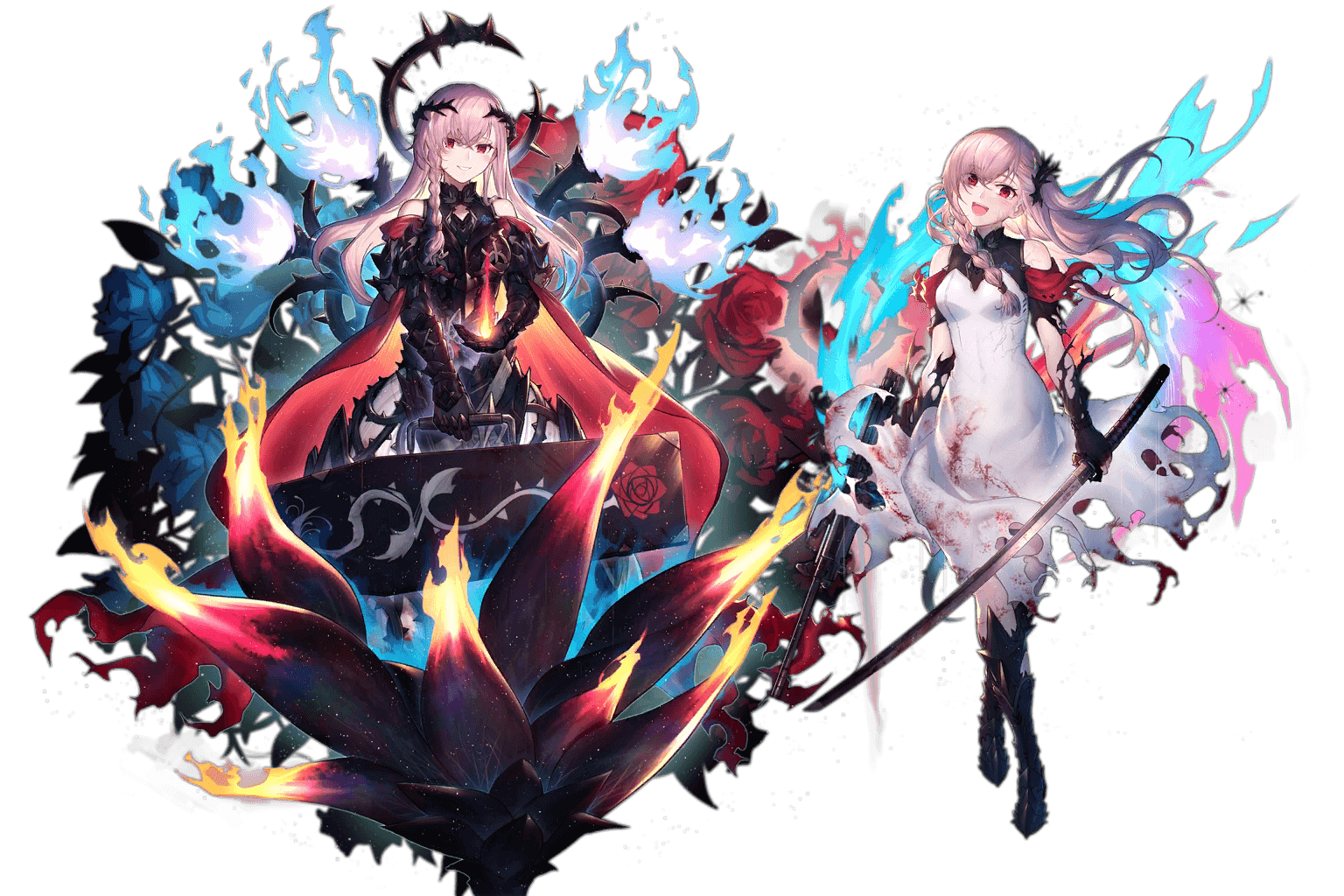 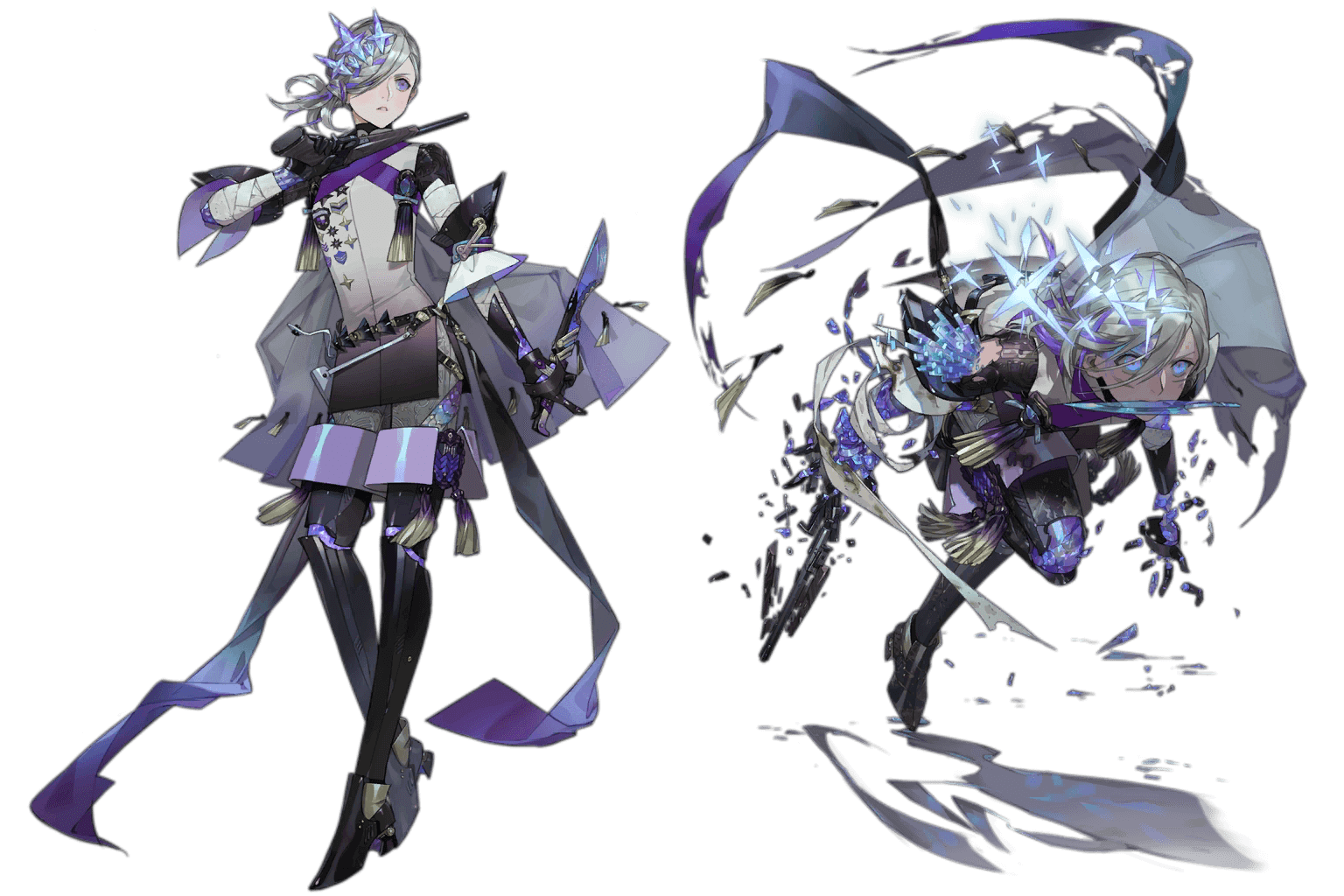 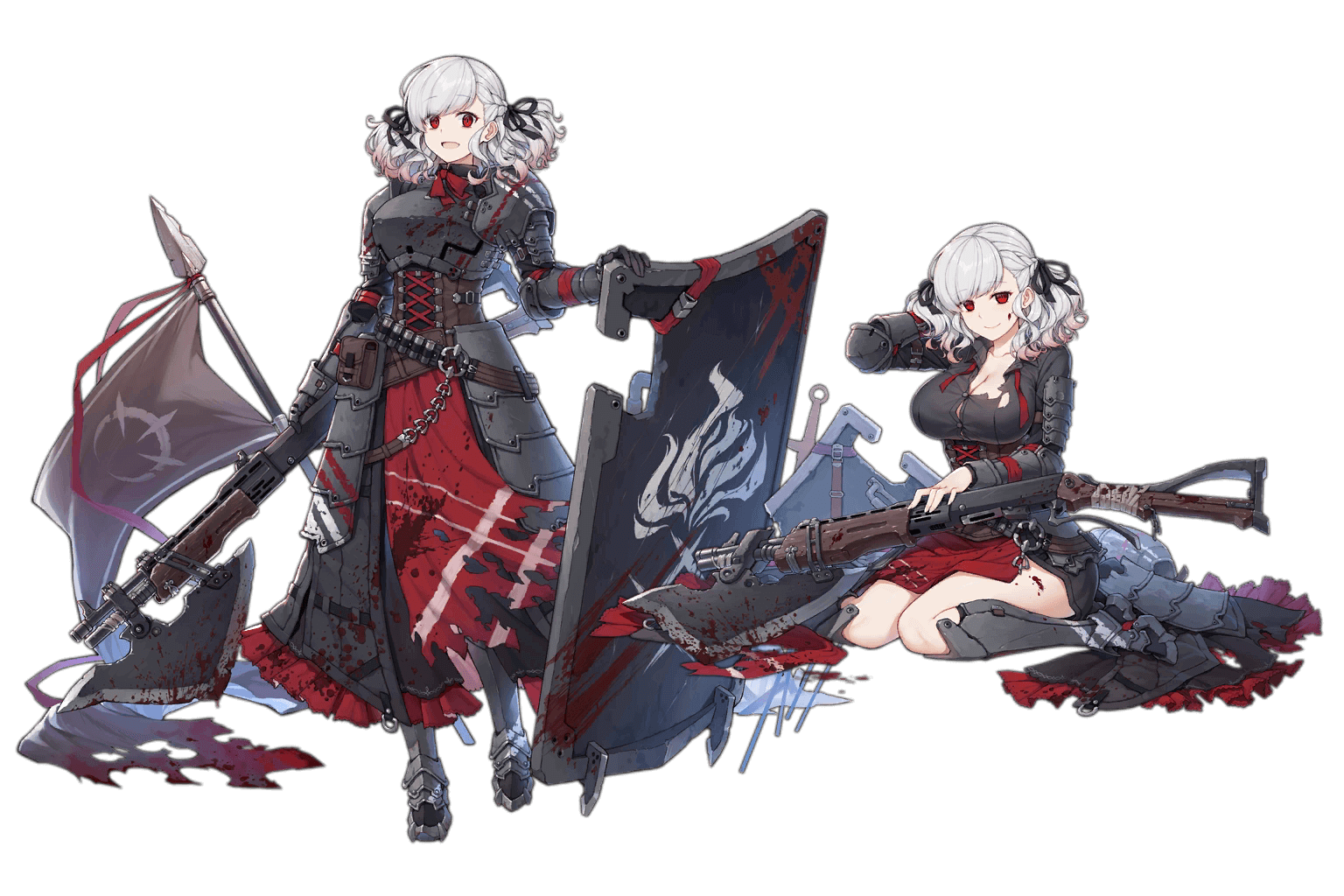 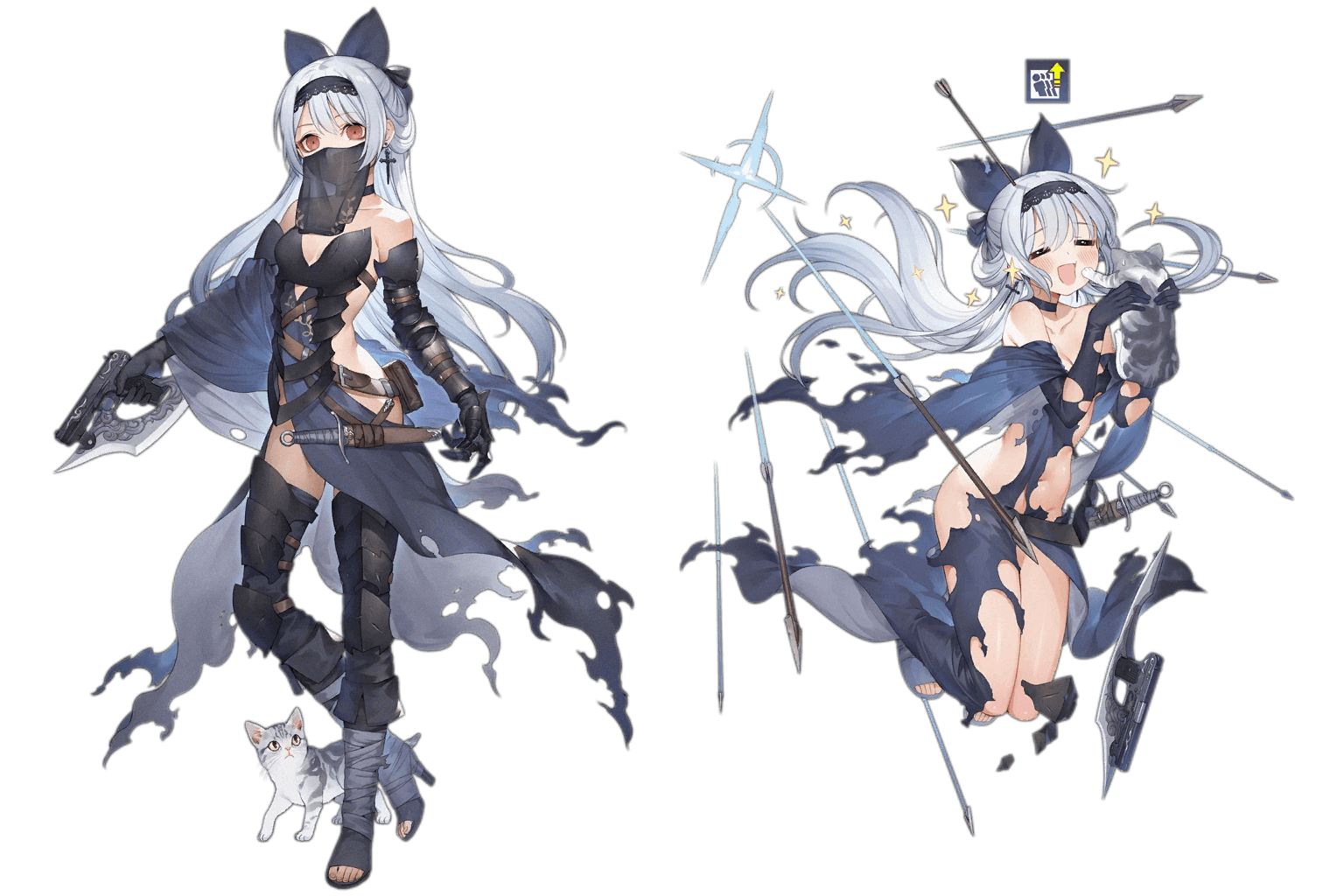 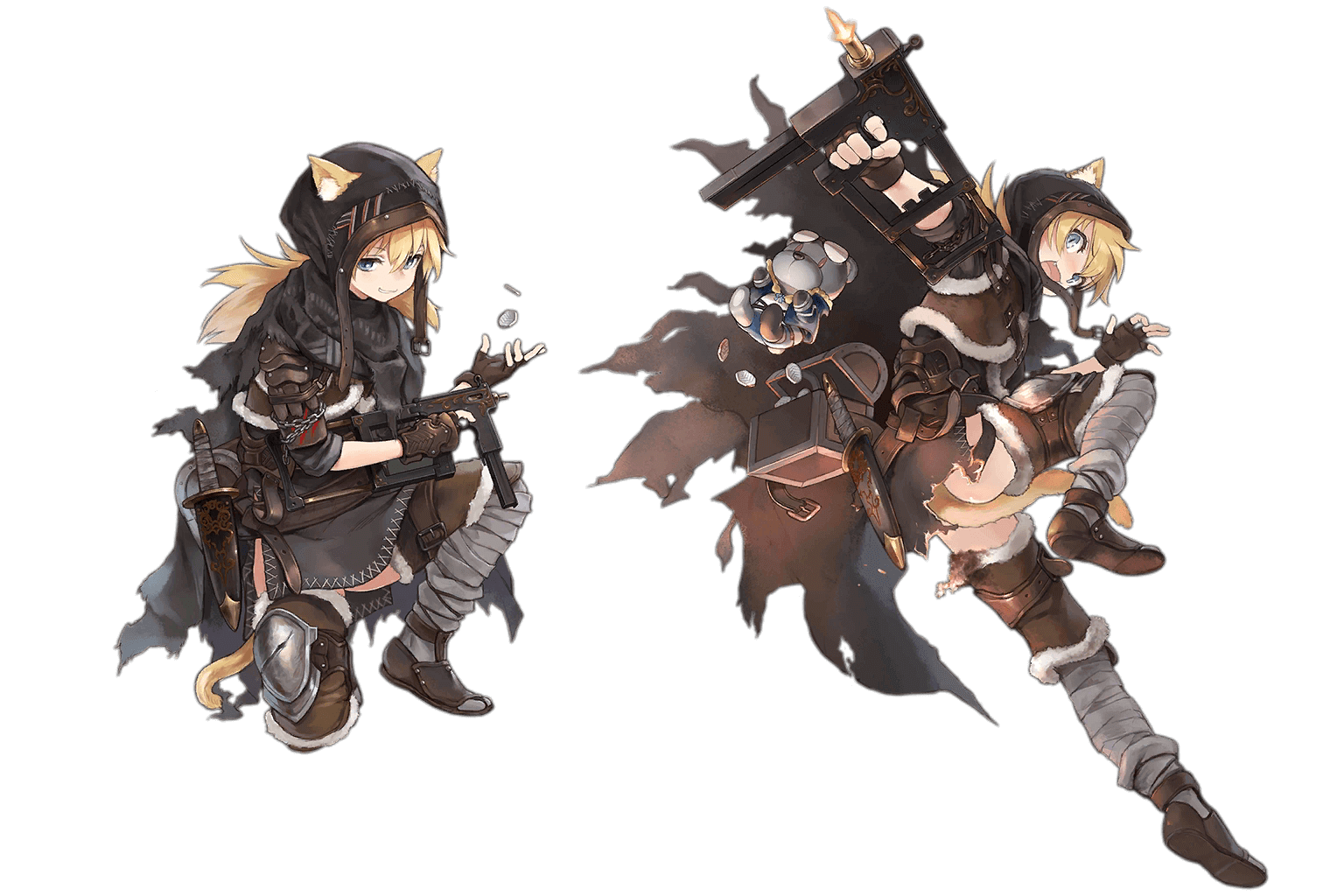