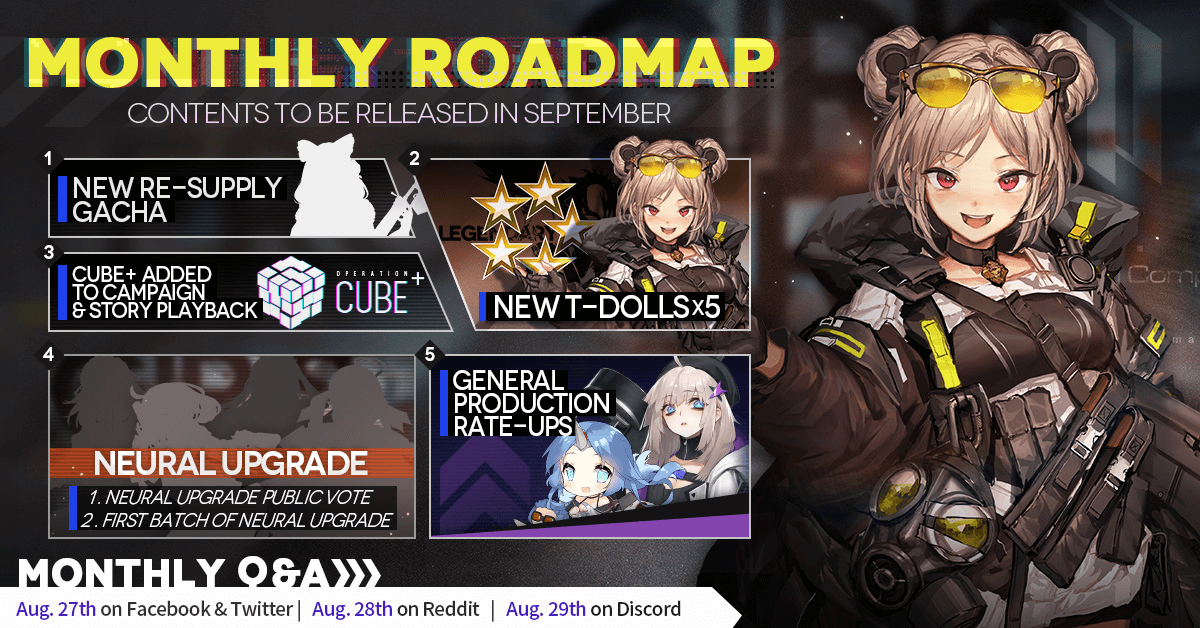 MICA Team has released the September roadmap for the EN Server; here's a quick look at each of the items teased by the developers: 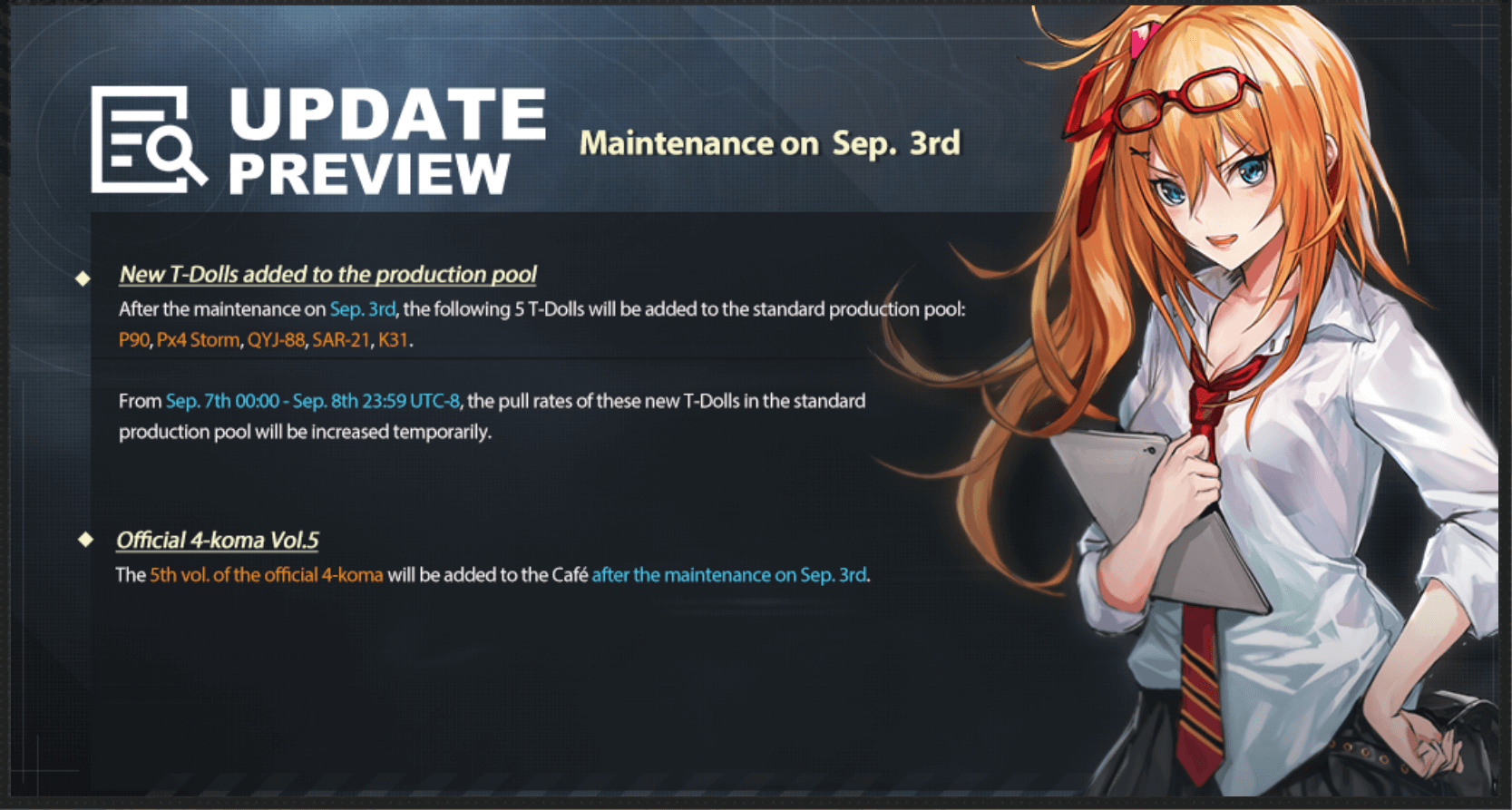 With EN's production pool rapidly catching up with older servers, many highly anticipated units are now finally being released in the west. The new batch will be added to the EN crafting pool after maintenance on September 3, and a Rate-Up event for the new units will run from September 7 to September 8.

The T-Dolls present in the next batch are as follows:

The adorable 5-star SMG prominently shown on the roadmap banner, P90 is infamous for being the source of much production gacha frustration on older servers due to an incredibly low 0.2% pull rate on her release, prompting an official apology from the developers and an increase to her drop rate to a much more manageable number.

The full Gamepress analysis for this T-Doll who cannot wait to rush B has now been released; check it out via the link above!

While the teaser banner hadn't shown any other T-Doll silhouettes for the 5x new doll batch, a question answered back in the August Q&A by the official Girls Frontline EN Twitter account indicated that Px4 Storm will be released in the next batch. Surely enough, she made it into this group of new T-Dolls, and a detailed full analysis for this interesting HG is available on her character page linked above.

Px4 Storm is a very highly anticipated HG T-Doll for players who are up-to-date on the older servers' team compositions, being the first HG T-Doll that can fully cover the entire back row with her tiles from tile 8 on top of a powerful skill that offers 50% more critical damage multiplier. Echelons built to take advantage of Px4 Storm’s skill will see a tremendous boost of their offensive capabilities.

As a side note, Px4 Storm is a possible drop from the 30/30/30/30 crafting recipe, so if the commander were to go broke on manpower and ammunition while attempting to produce P90, this low-cost recipe provides an economically feasible chance of crafting Px4 Storm, provided that there are leftover T-Doll contracts to use.

The Type 88 Machine Gun, or QJY-88, is a fairly standard second-volley MG with a 15% Armor tile buff that can be applied to the main SG from either position 1 or 4.

Notably, if the echelon doesn't move before her second volley, she'll gain 2 ammo on top of her already-decent starting clip size of 10. While QJY-88's stats could be better, she'll be able to do what MGs are expected to do on top of providing a decent Armor tile to the main SG.

K31 possesses the highest Rate of Fire buff active skill multiplier among RFs at 80%, though it comes with a sizable accuracy penalty.

She may be used as a standard RoF RF similar to SVD or WA2000, and will perform accordingly well in most situations.

SAR-21 is often called a "discount AUG" due to her similar skill. In reality, SAR-21 is more like the dollar-store version of AUG due to her far lower base stats exacerbating the under-killing problem that AUG frequently experiences, where a single hit during the spray-and-pray random targeting fails to fully kill a dummy link from the enemy and does not reduce incoming fire at all.

Due to the high Training Data requirements, the in-game return on investment for SAR-21 isn't great, especially for commanders who already have AUG or have other generally strong T-Dolls to train with their limited Data.

Commanders may also wish to save their resources and contracts for the upcoming General Production Rate-Up event, scheduled in the same month as the new batch and acting as a second chance for people who were not fortunate enough to obtain P90 or Px4 Storm during their initial release.

This General Production Rate-Up will likely be similar to the same event from May, providing commanders with four production rate-up events that each span two days, in the following order:

To maximize the value of this rate-up event, it is therefore recommended for commanders who still need a lot of units or equipment from standard production to spend their resources in the earlier standard rate-up events, as opposed to waiting for the heavy production rate-up. 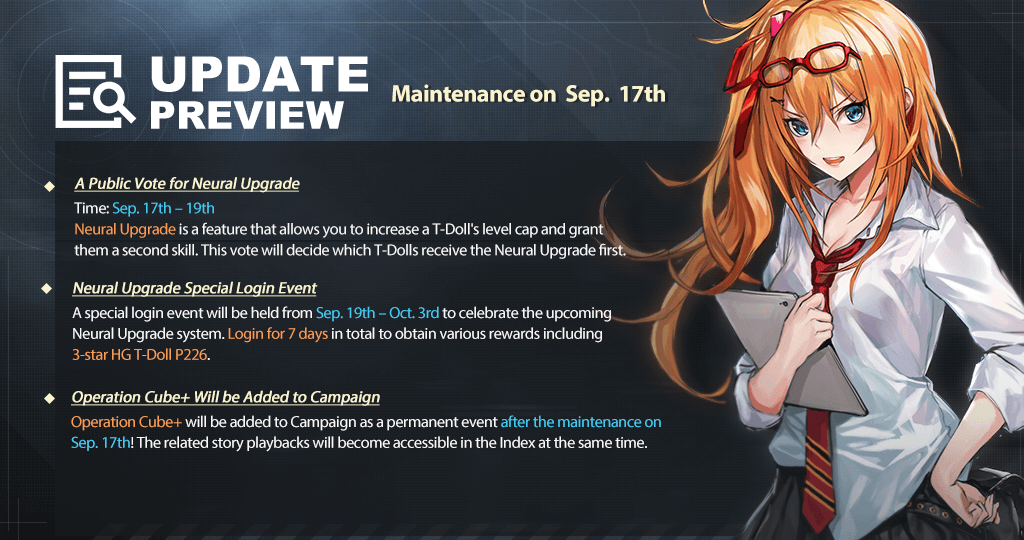 The long-awaited Neural Upgrade system will finally be coming to EN! Surprisingly, MICA Team is allowing the EN community a chance to pick-and-choose the first batch of T-Dolls to receive this upgrade between September 17th-19th, similar to the T-Doll Rescue Event voting previously allowed to the EN playerbase.

The following T-Dolls have so far been confirmed as voting options, an exciting list for EN players who are familiar with their Neural Upgrade effects:

(Note that neural upgrades related to the main storyline, such as the upgrades for the AR Team and 404, are tied to separate upcoming story events, so the first batch of Neural Upgrade T-Dolls will not contain them.)

Commanders interested in preparing can view a detailed explanation of the upcoming Neural Upgrade system right here on Gamepress. Saving up Dummy Cores and perhaps some extra Combat Sim Energy will go a long way.

The silhouette teased in the monthly roadmap belongs to none other than 64 Shiki’s 2019 New Years’ Live2D skin: 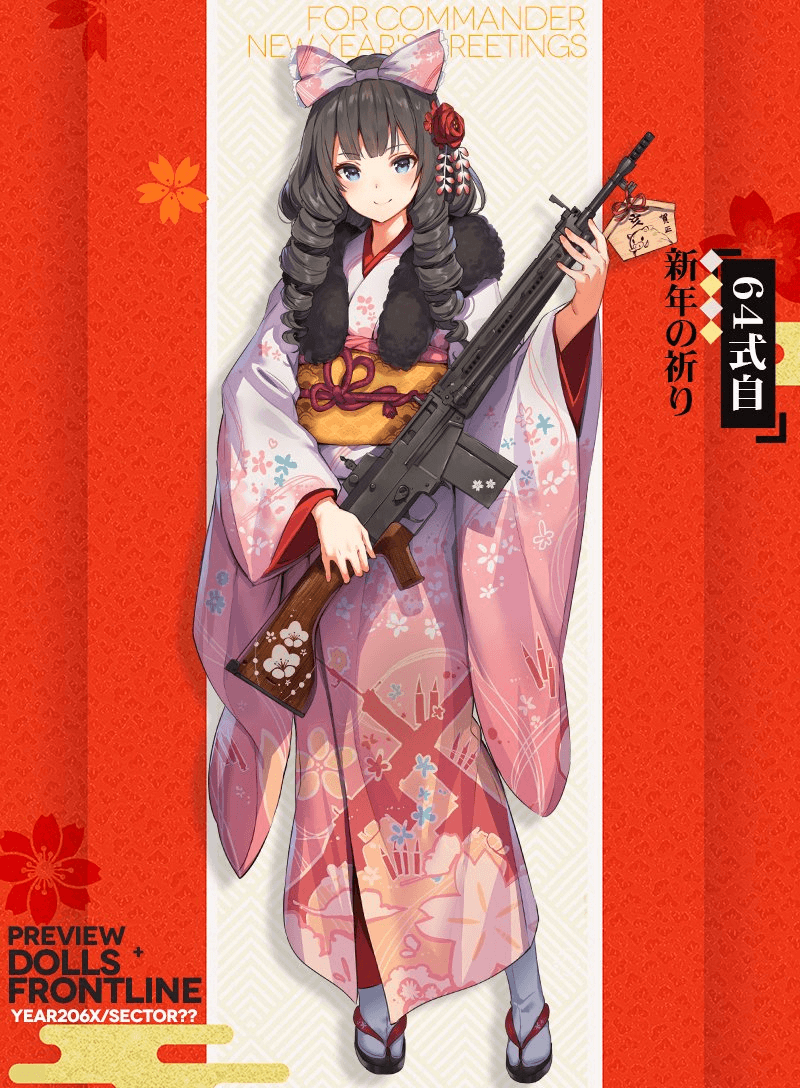 New Year’s in September is unexpected but welcome. Assuming Girls Frontline EN receives the same batch of skins as the Japanese server, the following skins are expected to be available: 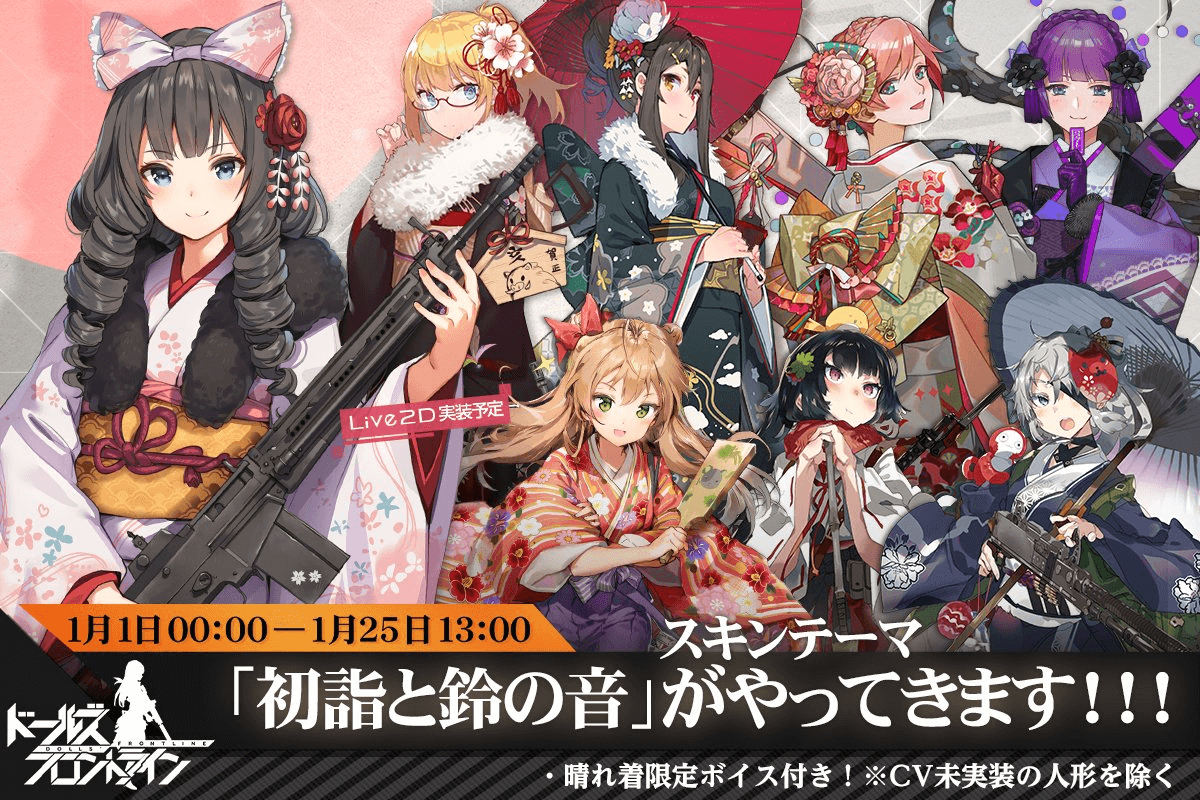 T-Dolls with a costume in the token re-supply gacha include:

will have their skins available as part of a gem bundle.

Full costume image previews can be seen in the T-Doll character pages linked above.

Update: The scheduled maintenance on August 27th will add these costumes to the client. Availability in the Re-Supply Gacha begins Saturday, August 31st. 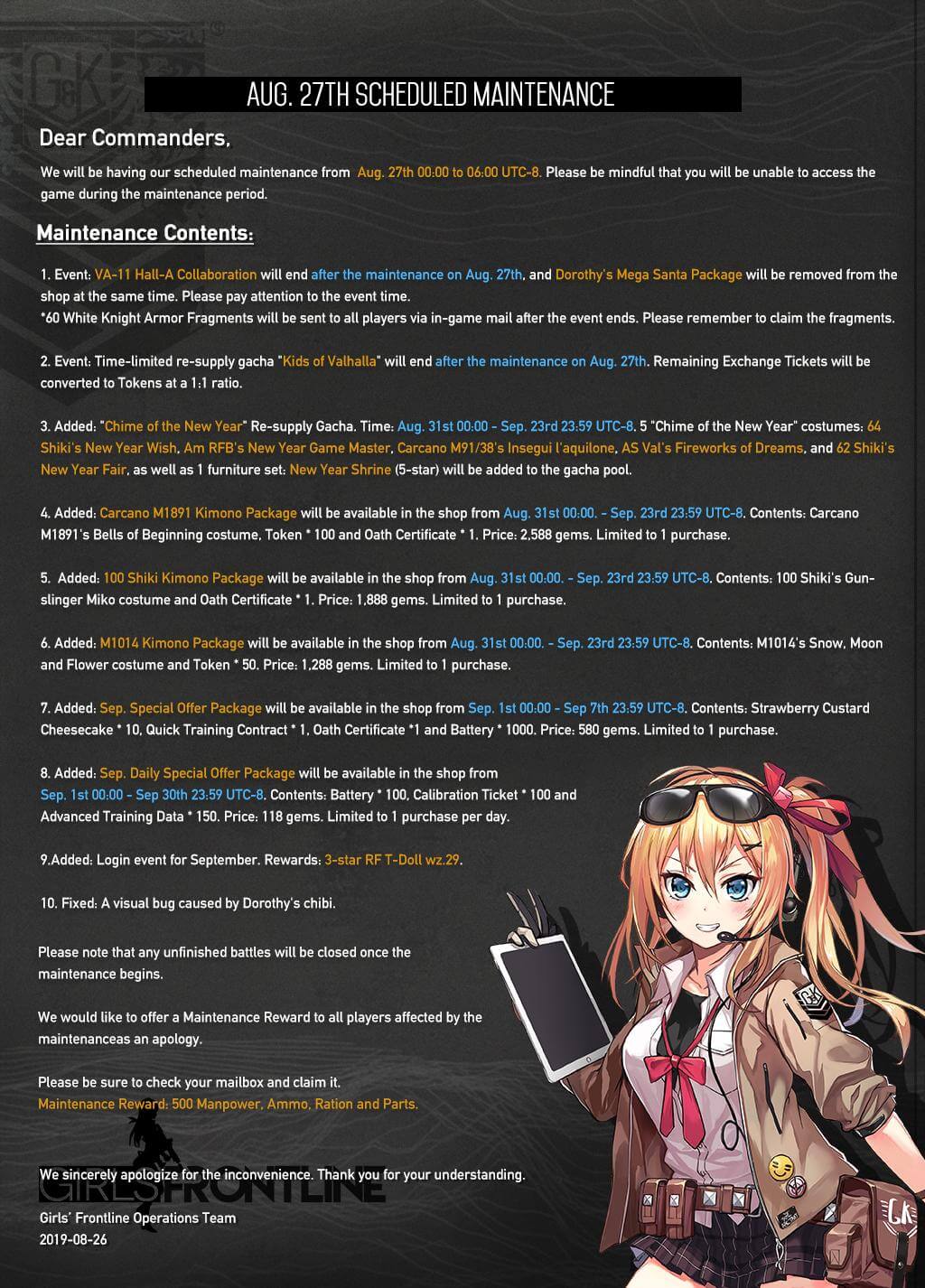 The recently concluded Cube+ Event will be added to the new Campaign tab some time in September.

While time-limited drops like Five-SeveN and event clear rewards like OTs-14 will no longer be available in this campaign mode, the event maps will be permanently accessible moving forward, similar to existing Arctic Warfare maps in the Campaign tab.

Commanders who missed the Cube and Cube+ events will have an opportunity to experience their infamously difficult maps and amazing storyline at their own leisure.

Interested commanders may consult the Gamepress Cube and Cube+ Guides.