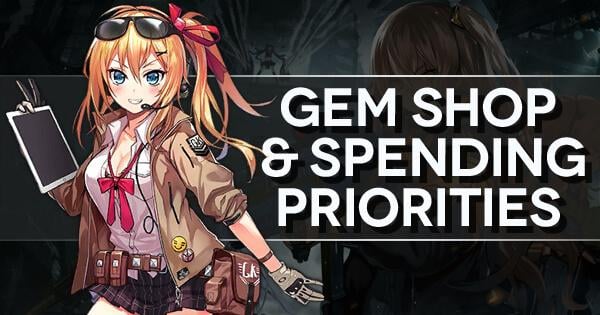 New Career Quests and Progression: How to Start in Girls’ Frontline

While Girls’ Frontline is very friendly to Free to Play (F2P) players due to the character and equipment gacha being based on free resources, the game still has a premium currency whose use should be carefully budgeted.

The currency in question, Gems, are primarily used for improving base infrastructure or purchasing cosmetics. They can also be used to purchase consumable items and Tokens, the premium currency used for the costume/furniture cosmetic gacha.

Gems can be earned by F2P players from achievements, quests, log-in rewards, and a weekly social media share. See the Earning Gems section for more information.

The most important usage of the scarce Gems earned early on by Commanders are as follows:

The Gem Budgeting section outlines the detailed reasoning behind this recommended purchase order. 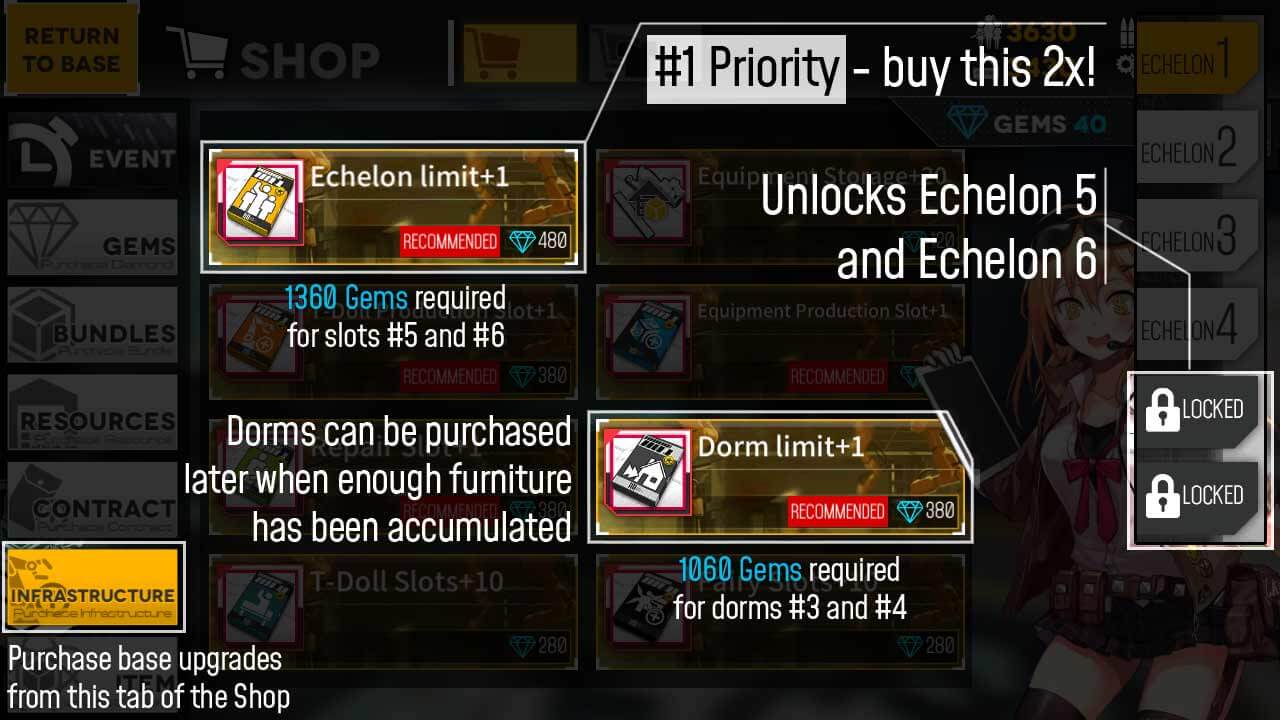 Commanders will receive an abundance of Gems from many sources:

Aside from the one-time rewards, there is a steady and reliable monthly Gem income consisting of: 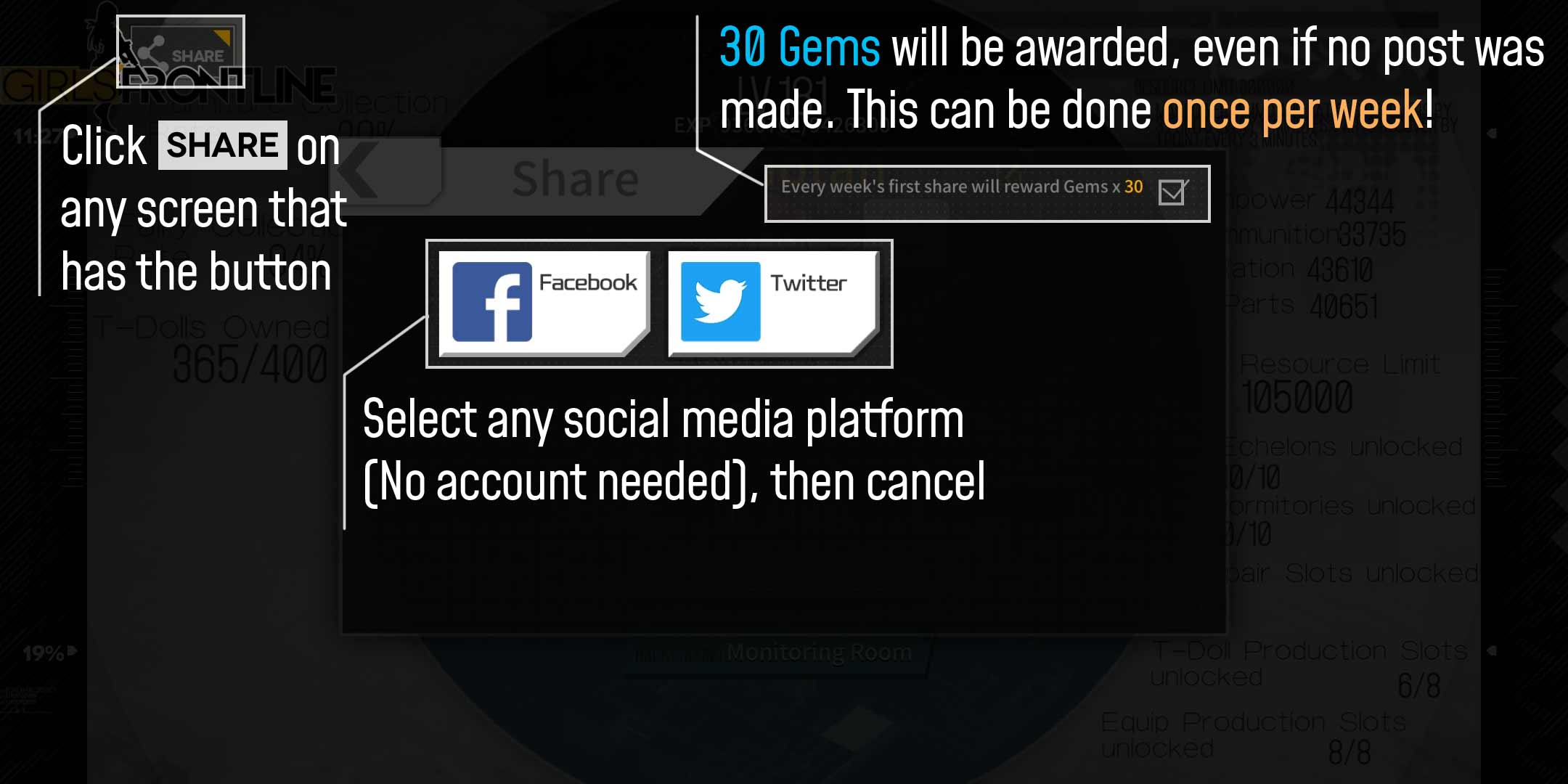 Additional sources of Gems include:

Commanders can generally expect to unlock up to the sixth Echelon slot and the fourth Dorm for free with the one-time rewards, with additional purchases trickling in over time from the monthly free gems.

As the one-time Gem rewards become exhausted from regular gameplay, Gem accrual will eventually slow. It is therefore important to use the premium currency efficiently to avoid becoming paywalled due to unwise purchasing decisions.

The first priority for new Commanders will be unlocking the fifth Echelon slot: This allows for four Logistics to be run around the clock while reserving an Echelon for clearing combat missions or leveling.

As many missions are much easier to do with two echelons, the sixth slot is highly recommended as the next purchase despite the increased price.

Why are logistics important? 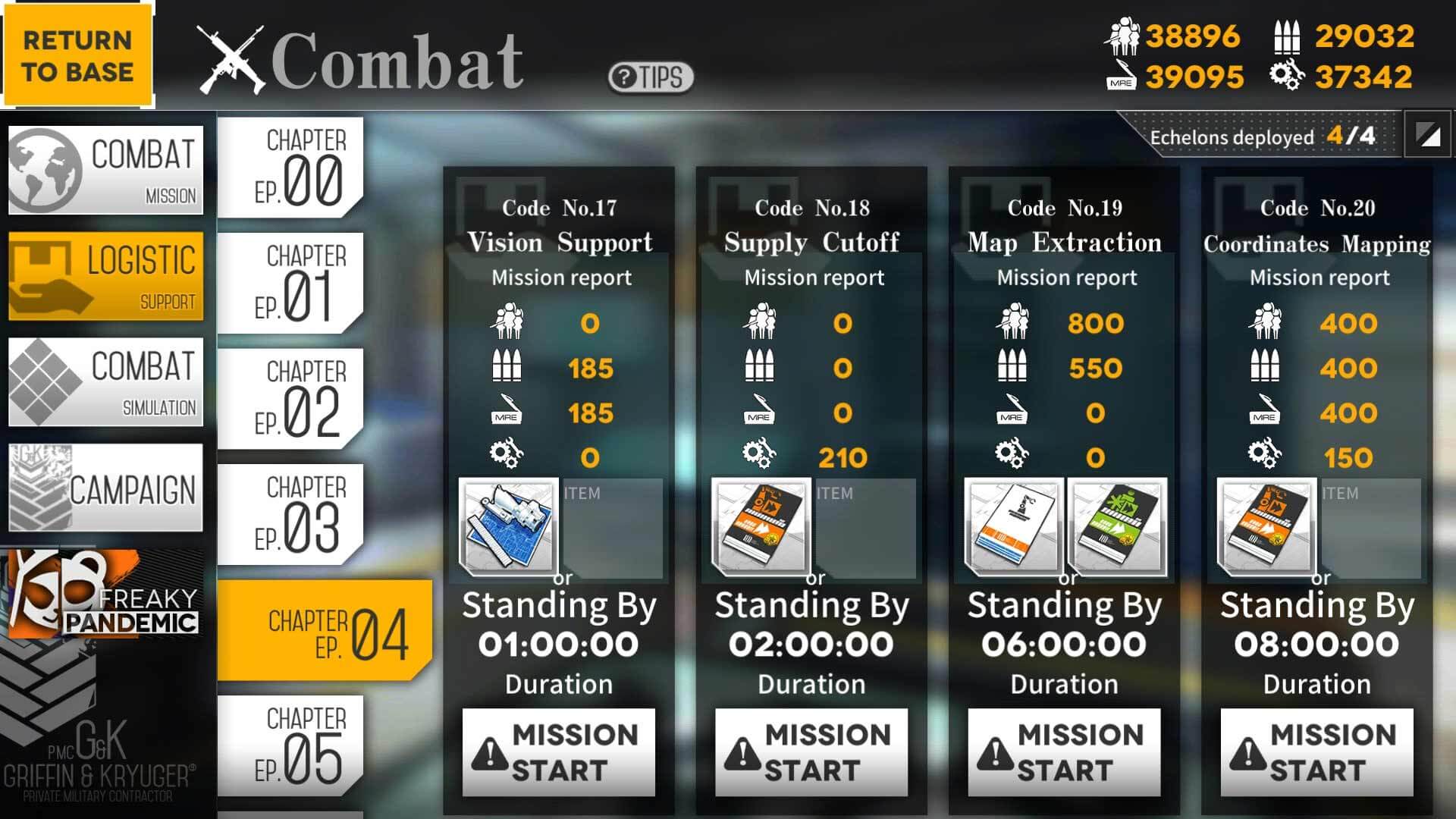 A maximum of 4 Echelons may be sent on Logistics missions simultaneously. As a Commander starts off with only four Echelon slots, full Logistics saturation cannot be achieved if a Commander wants to use one echelon slot to run combat missions.

Thankfully, early-game Logistics are not particularly high in yield, so Commanders are not losing too much by running only three teams for a while until they buy their sixth Echelon slot.

Some decent early-game logistics are as follows (run the best ones available, with longer-duration ones used for overnight Logistics):

Note: The 1-4 Logistics mission is not recommended because its T-Doll Contract drop rate is an abysmal 20% without Great Success! It is deceptively bad and will usually give nothing.

Unlocking the 3rd and 4th Dormitories

With six echelon slots unlocked, Commanders can comfortably run Logistics and still send two Echelons out on combat missions. The next priority would be unlocking Dormitories starting with the 3rd Dormitory, as the first two are unlocked by default.

Dormitories, while primarily a cosmetic feature, impact gameplay rather significantly due to their effect on battery generation. For more information on why batteries are important and how Commanders should allocate their battery income, please refer to the following guide: 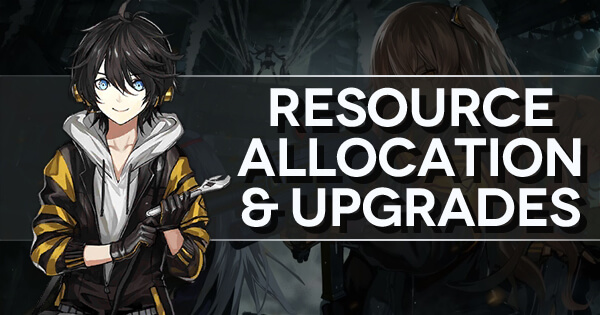 The Battery Condenser provides batteries based on a combination of Dorm count and total comfort, where comfort is derived from furniture placed in said dorms.

Tip: The exact battery yield can be calculated here.

Since Commanders need to be able to furnish the dorms with furniture from the re-supply gacha to increase battery generation, it may be wise to defer purchases of the 4th+ Dormitories until the Commander actually has enough furniture to fill those dorms.

The 7th and 8th Echelon slots are the best to acquire next. They enable more combat echelons and dummy echelons to be deployed for particularly challenging missions, allowing for the Commander to clear harder content requiring additional teams without sacrificing Logistics.

Dummy Echelons are echelons consisting of one unleveled HG, primarily used for generating additional AP (as each deployed echelon gives 1 AP per turn), or to save movement points for resupplying in missions via echelon swapping.

Commanders may also make use of these extra slots to conduct Auto-Battles as another method of leveling dolls or acquiring enhancement fodder, but they are not resource efficient and are generally not recommended for Commanders who have time to actively play.

Beyond this point, Infrastructure upgrades are primarily up to the needs of the Commander and how much money they are willing to spend once the essential infrastructure has been acquired.

Tip: Retired T-Dolls can be recovered from the Index once per week for the core cost of a single Dummy Link. If running low on storage space, do not be afraid to retire units one is not planning to use any time soon, since it is possible to get them back later if needed. 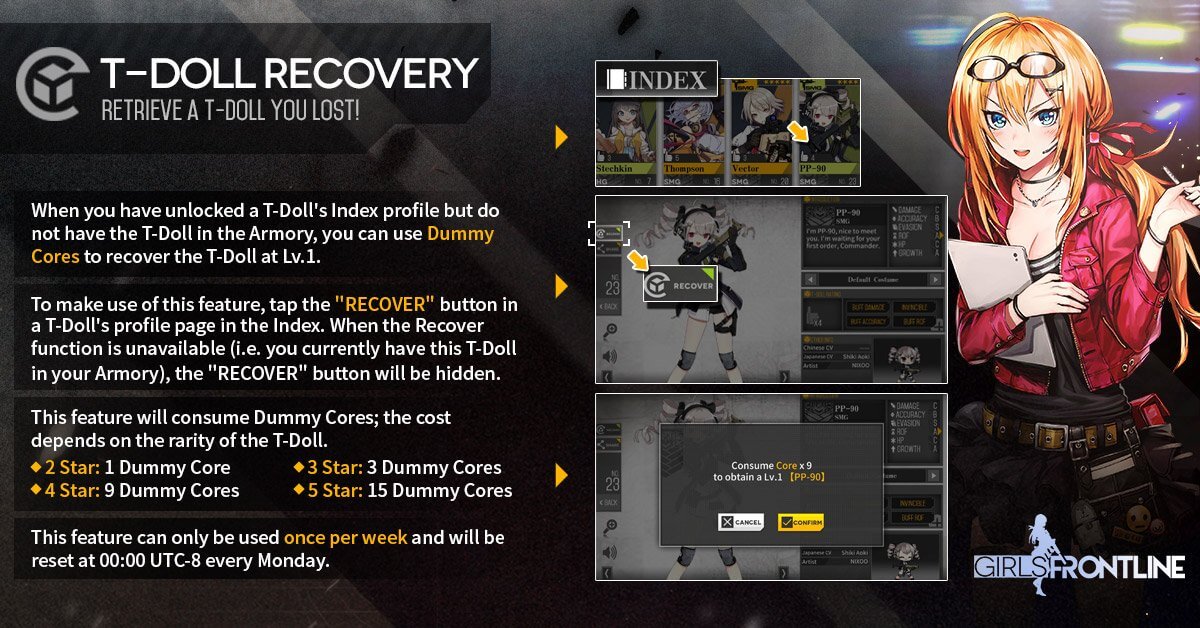 What not to buy

All Gem purchases should be made responsibly and thoughtfully.

I'm running out of T-Doll space and I haven't even bought my sixth Echelon slot yet! What should I do?

In the T-Doll section of the Index, Commanders will find the option present to recover any T-Doll previously acquired, but of which no copies are present in the Armory. This means that Commanders are free to retire even high rarity T-Dolls that may require large investments that they wish to use later but cannot afford to raise at the present time.

Therefore, the sixth Echelon slot should still be prioritized over T-Doll Storage Slots.

Should I re-supply from the Radiant Collection to get furniture faster?

While new Commanders without any furniture can roll the Radiant Collection to fill out their first dorm quickly, it is worth noting that each item of furniture provides comfort to a fixed cap which can only be surpassed using Set Bonuses; by acquiring and placing a number of unique, individual furnishing from a Collection, bonus comfort will be awarded.

Due to the eclectic mix of past Collections present in the Radiant Collection Re-Supply, it is much harder to acquire any specific set bonus, and Commanders looking to increase Dormitory Comfort should make use of the Time-Limited Re-Supply gachas instead, once they have a comfortable supply of Tokens to guarantee a few sets.

I'm planning to buy Gems, are my priorities different?

Long Answer: The outlined expenditures of Gems are the ones that will give the highest return on investment to Commanders. The sequence is optimal for Gem expenditure effectiveness and the impact on general gameplay, regardless of whether or not a Commander plans to spend money for Gems. Most other purchase options are convenience items that will be gained over time for free, such as contracts, resources and tokens.

Commanders who regularly spend on the game may, however, find themselves purchasing the following:

Which gem packages are the most cost-efficient?

For instant bulk Gem purchases, new Commanders can take advantage of the First Time Purchase bonus that doubles the value of Gem purchases. This bonus will typically reset on each Anniversary for the game server.

It is recommended to purchase one of each pack while this bonus is active, as that offers the best value over re-purchasing an existing pack without the double Gems bonus.

The packages break down into the following prices (in US Dollars): 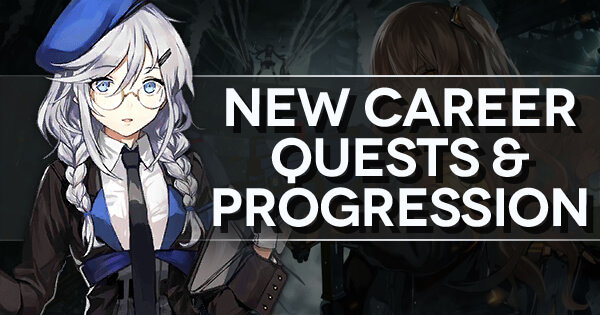 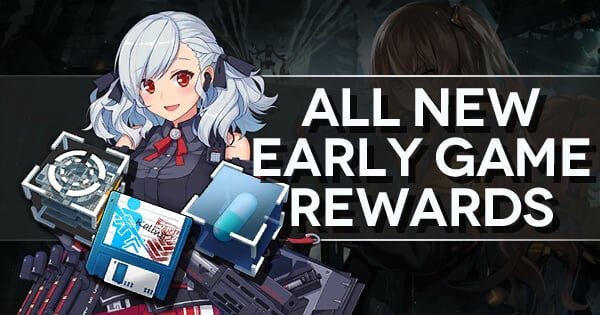 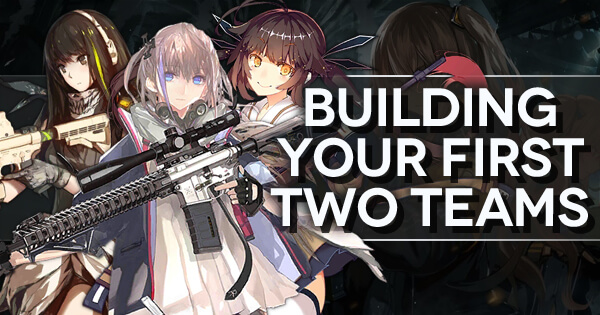 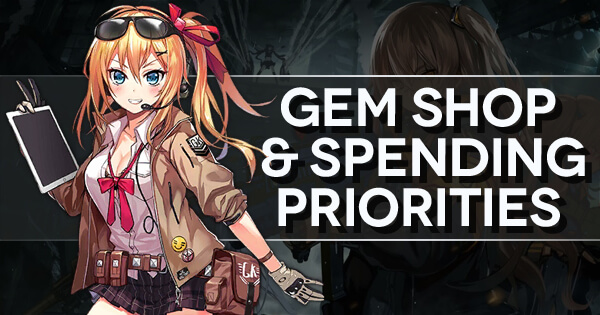