Submit Feedback or Error
Article by moonlee7777 Chen The Summoner

Operation Cube+ is a partial rerun of the Operation Cube event, with an added second chapter featuring four more maps. All four of these maps, like Operation Cube, are night maps. Due to the frequency of Armored enemies and the appearance of tarantulas in this new chapter, ARSMG, HGRF, and MGSG Echelons are recommended. If you’ve yet to beat the first chapter of this event (E1-1 to E1-4), our Operation Cube guide can be found here.

One unique aspect of Operation Cube+ is that Special Equipment drops in certain event maps, though limited T-Doll drops are available as well. The drop tables are shown below.

Like previous events, each map gives clear rewards after a certain number of clears. The requirements and rewards are listed below. 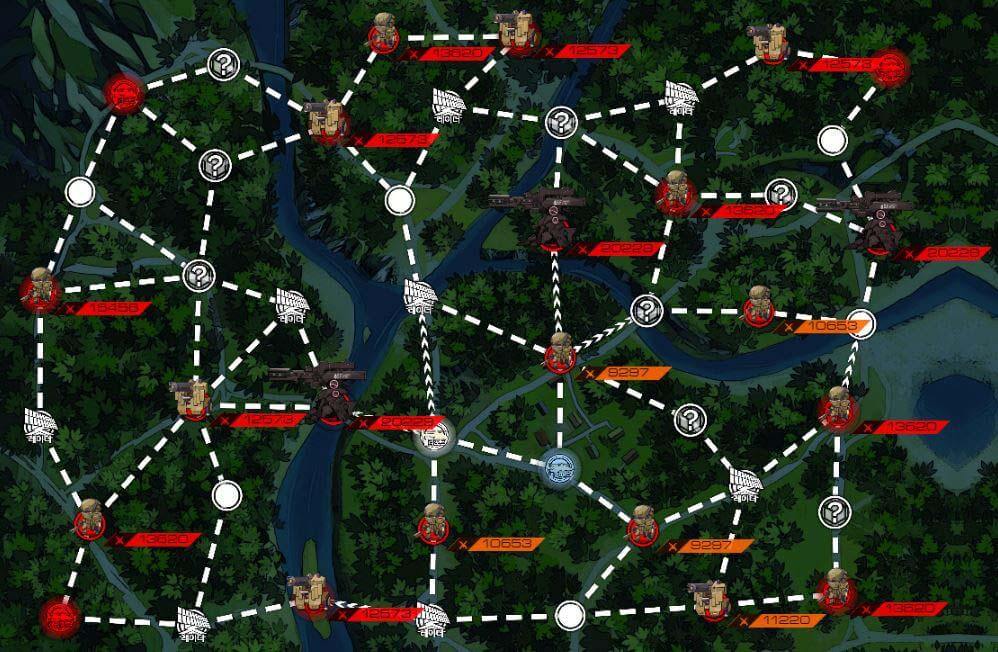 E2-1 is the first new map in Cube+ which needs to be cleared 4 times for completion. To clear this stage, the boss Hunter, who spawns pseudo-randomly throughout the map, must be found and defeated.

Hunter herself is a fairly straightforward boss, with no micro necessary. She has no special skills or triggers.

For this strategy, three combat-ready echelons are necessary, 5x linked RFs or MGSG are advised. 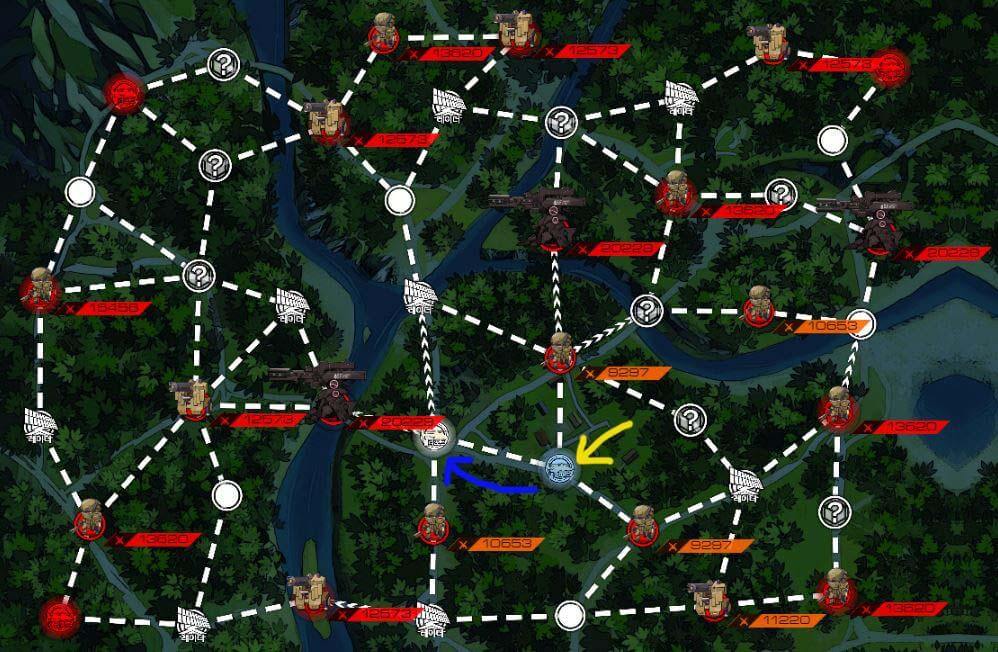 On turn one, deploy your first Echelon, then move it to the Heliport that’s to the left. Then deploy another Echelon on the allied Heliport. 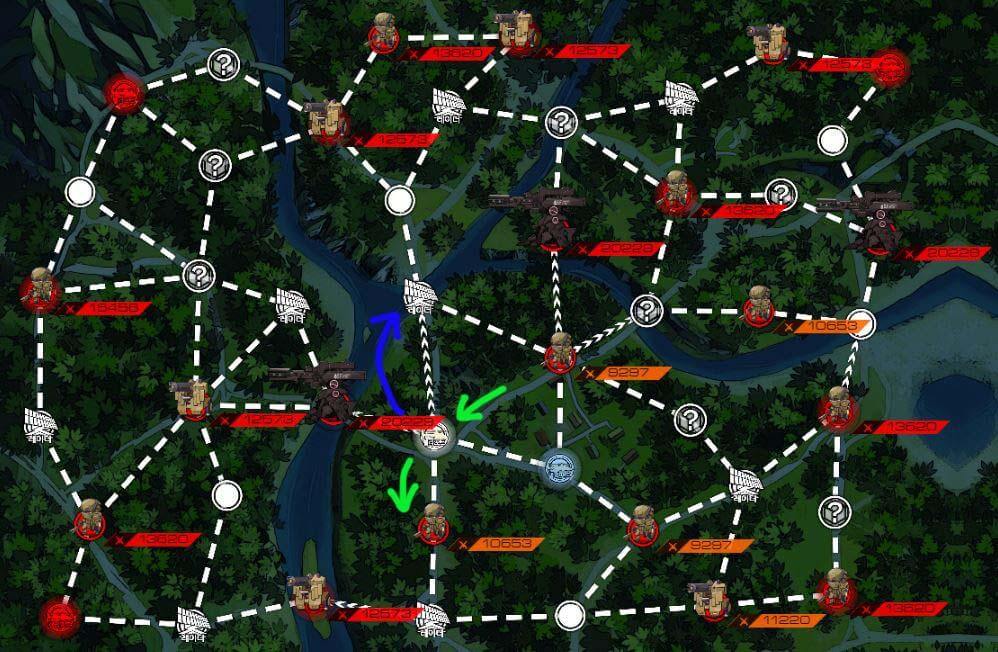 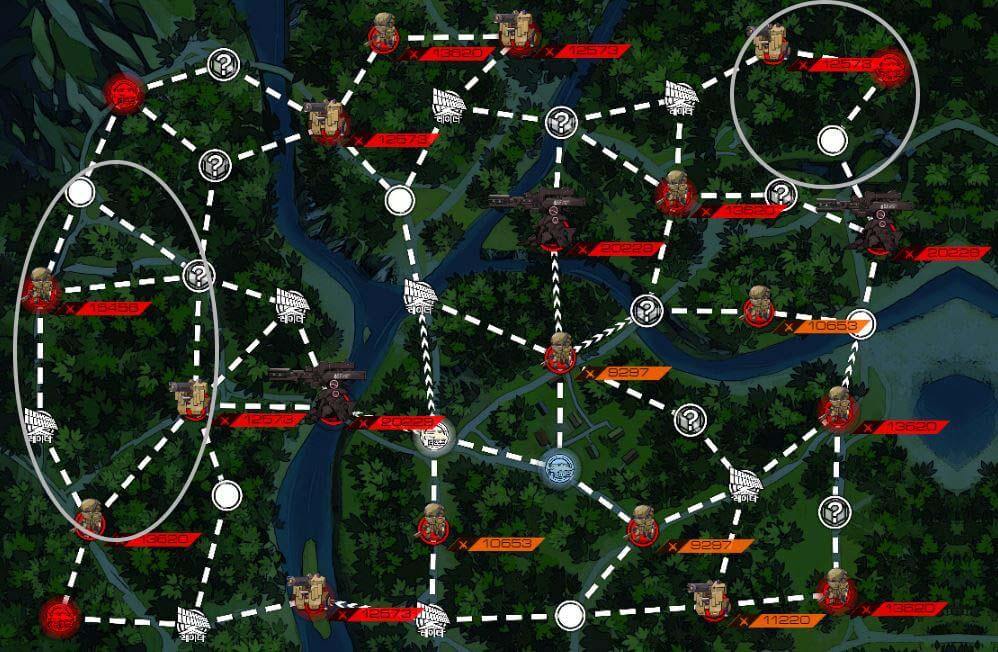 From this point onwards, your primary focus will be hunting for the boss. The screenshot above shows the two groupings of nodes where she can spawn. 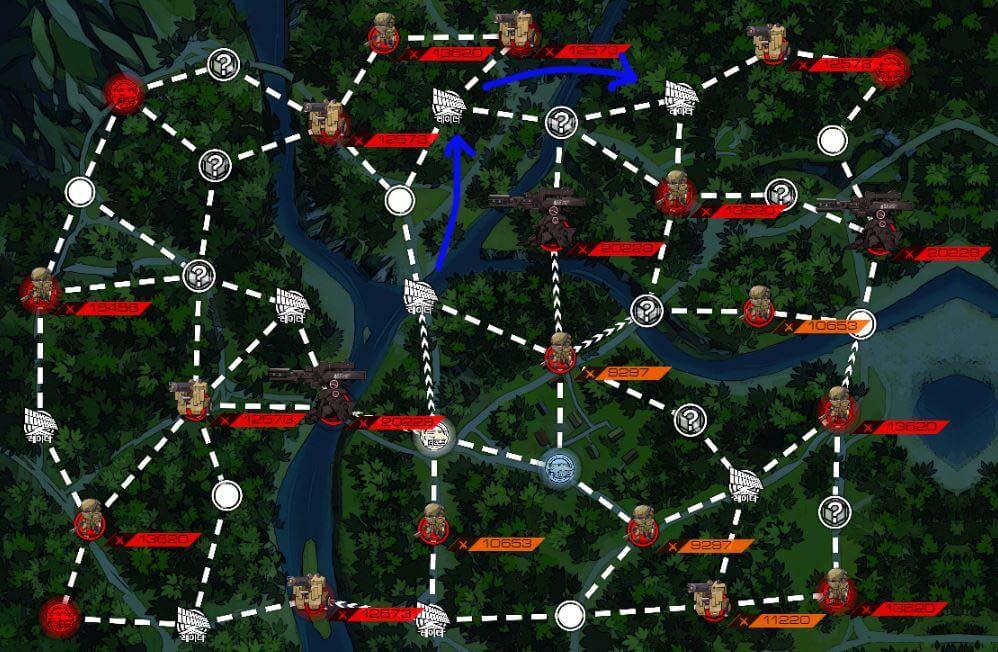 To check the upper right corner, move an Echelon to the radar two tiles away from the top right Heliport, then search the nodes that were circled above. 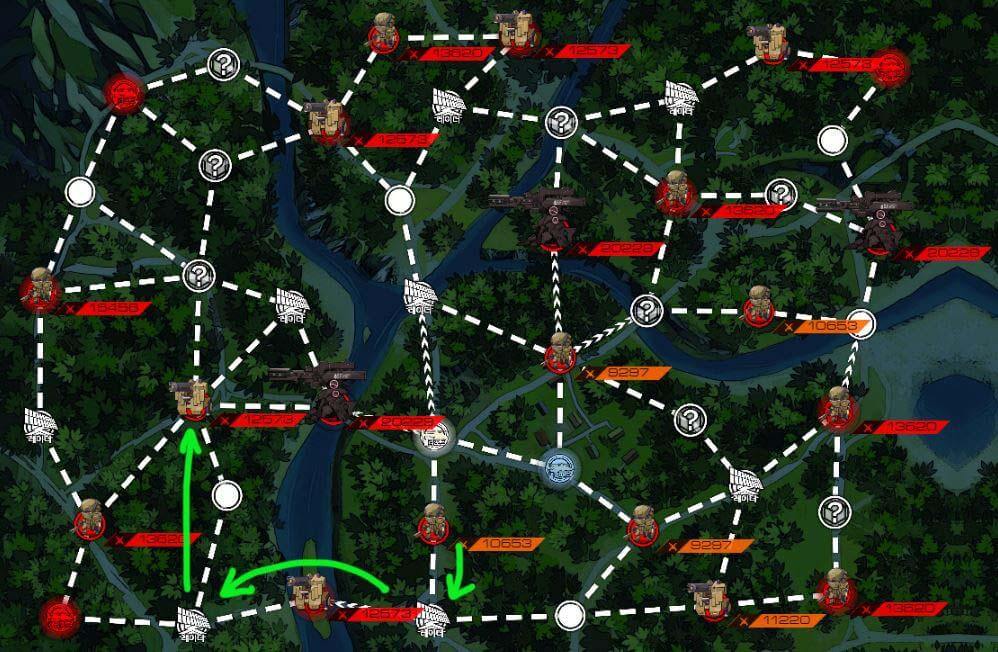 If Hunter is not on any of those nodes, then move the Echelon at the bottom of the map to the second zone and search there. 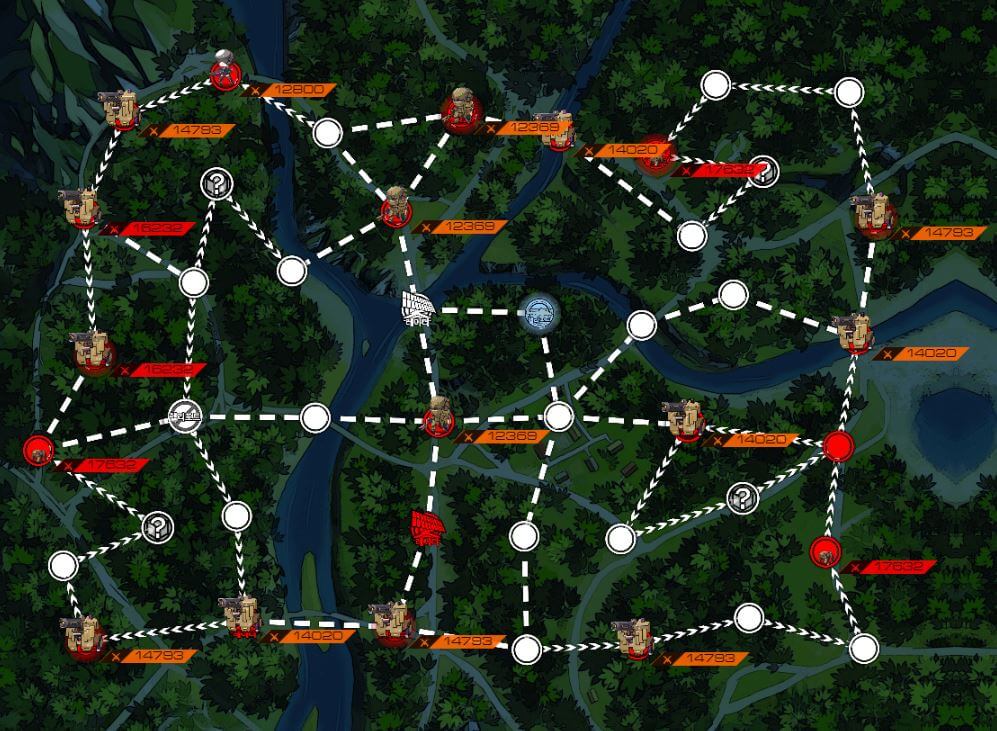 The map for E2-2, Bearing Miscalculation.

E2-2, the second new map of the event, requires you to find and defeat Executioner, another boss. 4 total clears are necessary, and the reward for a full clear is the furniture Night Cube.

One thing to note about Executioner is that some level of micro is necessary; at 75%, 50%, and 25% health, she uses her special skill, which hits in a T-shape.

The back three slots are hit with am 1.5x attack, while the middle 3 slots are hit with a 2x attack. The overlapping spot (marked with the bold !! above) is hit with both. By quickly moving your T-Dolls to the unaffected spaces, you can avoid a good deal of damage, but since there are only 4 safe slots, letting a T-doll get hit or retreating one is unavoidable. 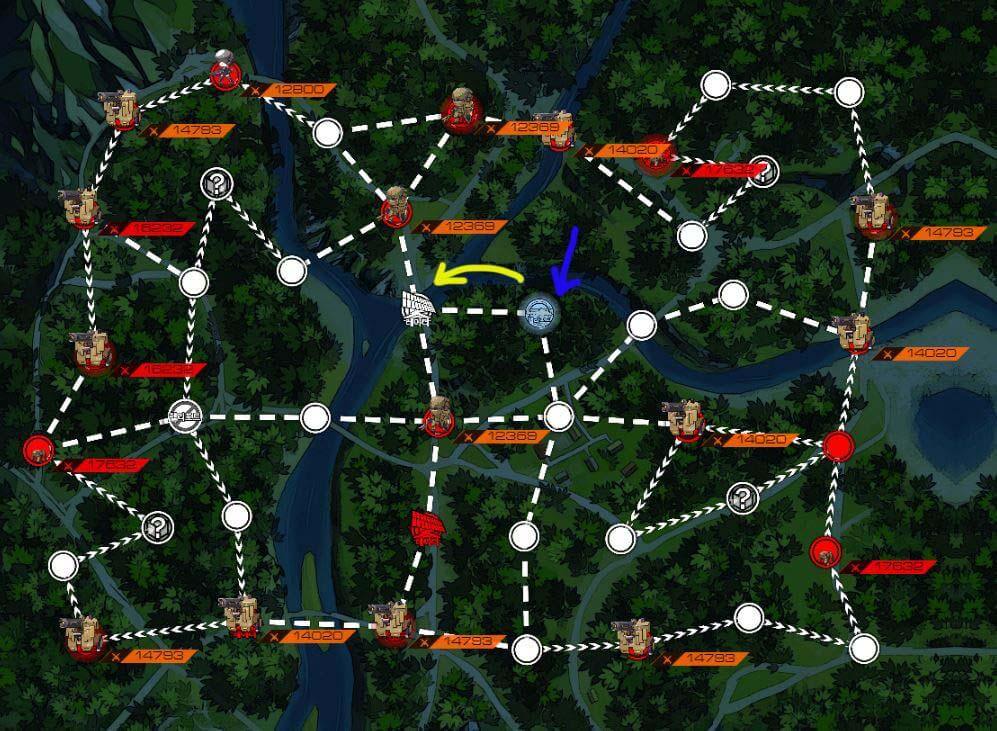 On the first turn, move an Echelon to the radar on the left. After, deploy a dummy Echelon on the Heliport. 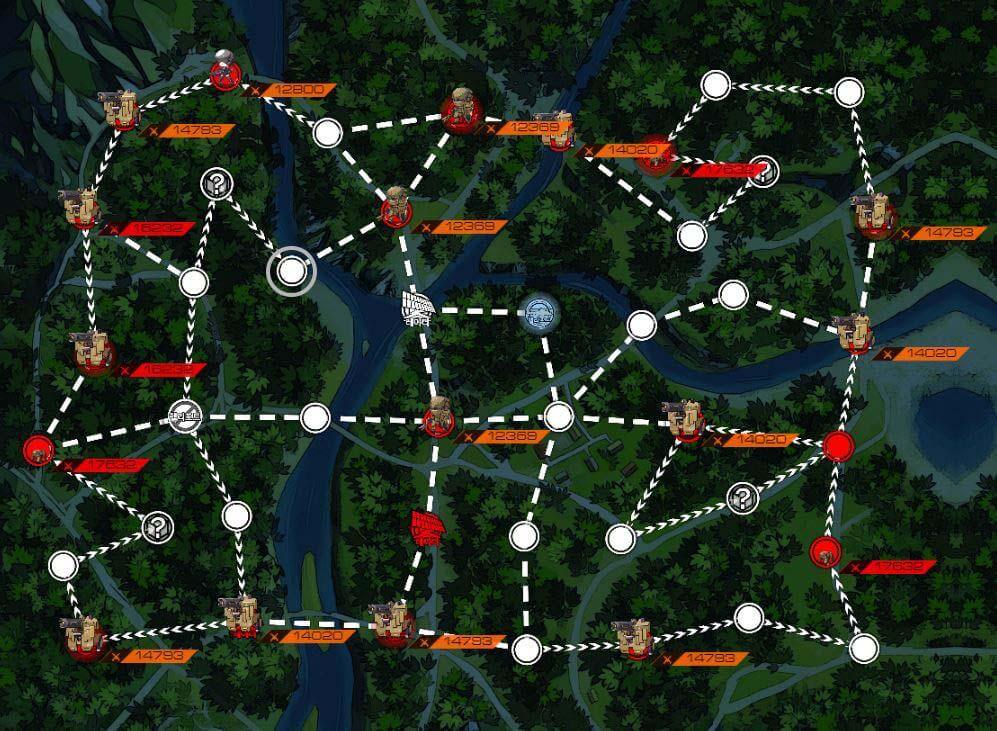 On turn 2, the radar will reveal surrounding nodes. If Executioner is not on the node circled in gray above, move your main Echelon to the Heliport, retreat, and restart the map. 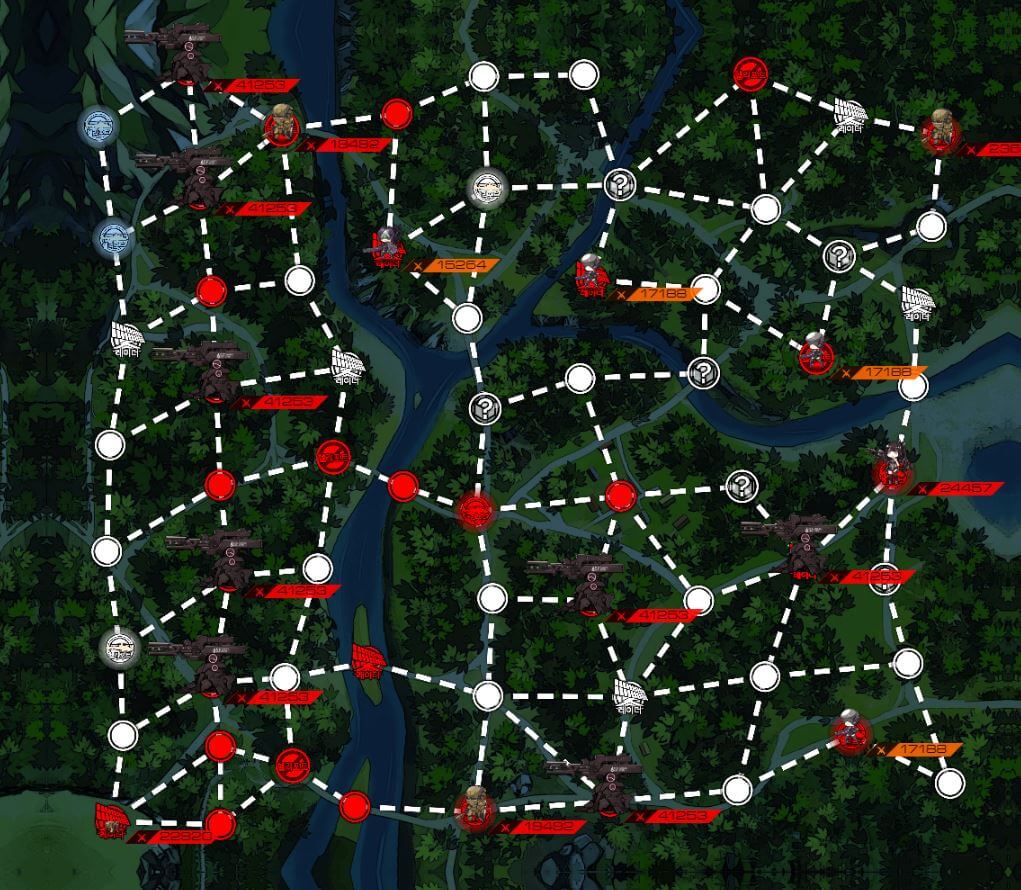 The map for E2-3, Directional Algorithm.

To fully clear E2-3, 4 individual clears of the map are necessary. Like previous maps, the clear condition is defeating the boss, Architect. The clear reward for this map is 200 tokens.

This map is also relatively easy, only requiring one battle ready and one dummy echelon.

At 75% and 50% health, she targets a random point in the map and fires a missile which does AoE damage in a cross shape.

At 25%, the area of the attack increases, now fully surrounding the point of impact. 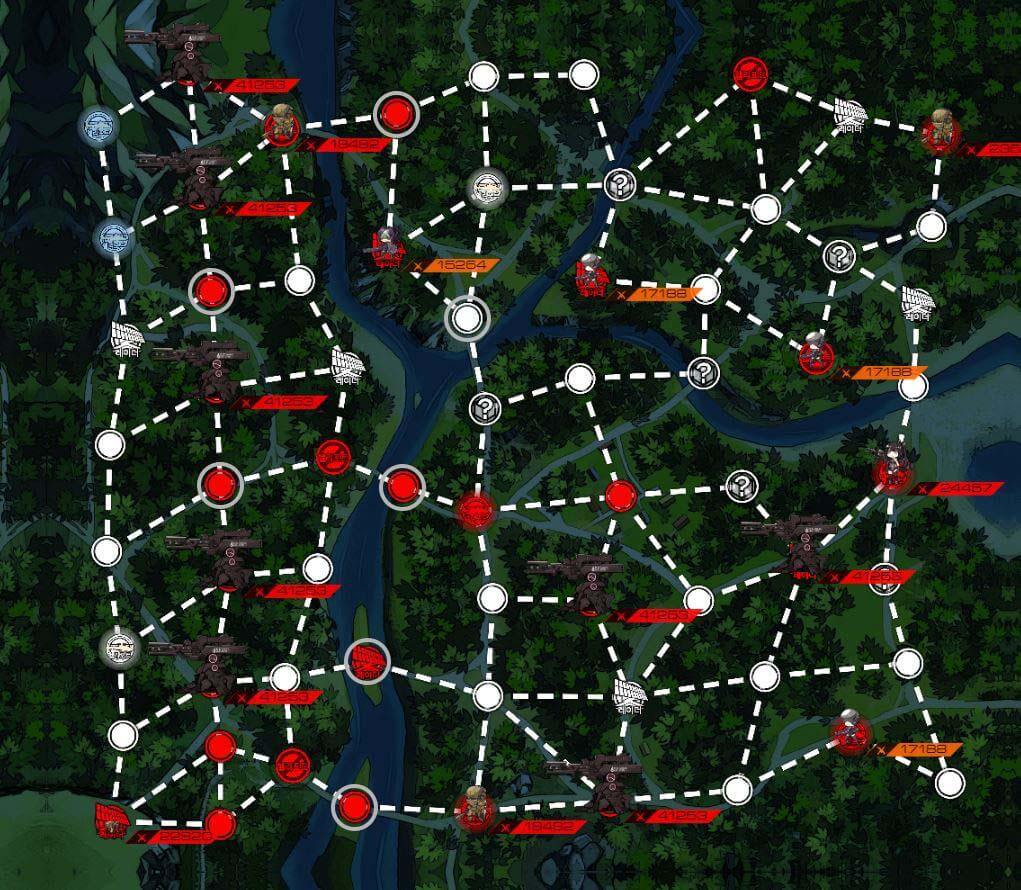 Before starting the map, place down a dummy Echelon in the upper left Heliport and a combat ready Echelon on the Heliport directly below. This map also has two types of randomly spawning Jupiters: encounters with only 1 Jupiter, and encounters with 3. The nodes circled in gray on the map above have a chance to spawn 1 Jupiter encounters. 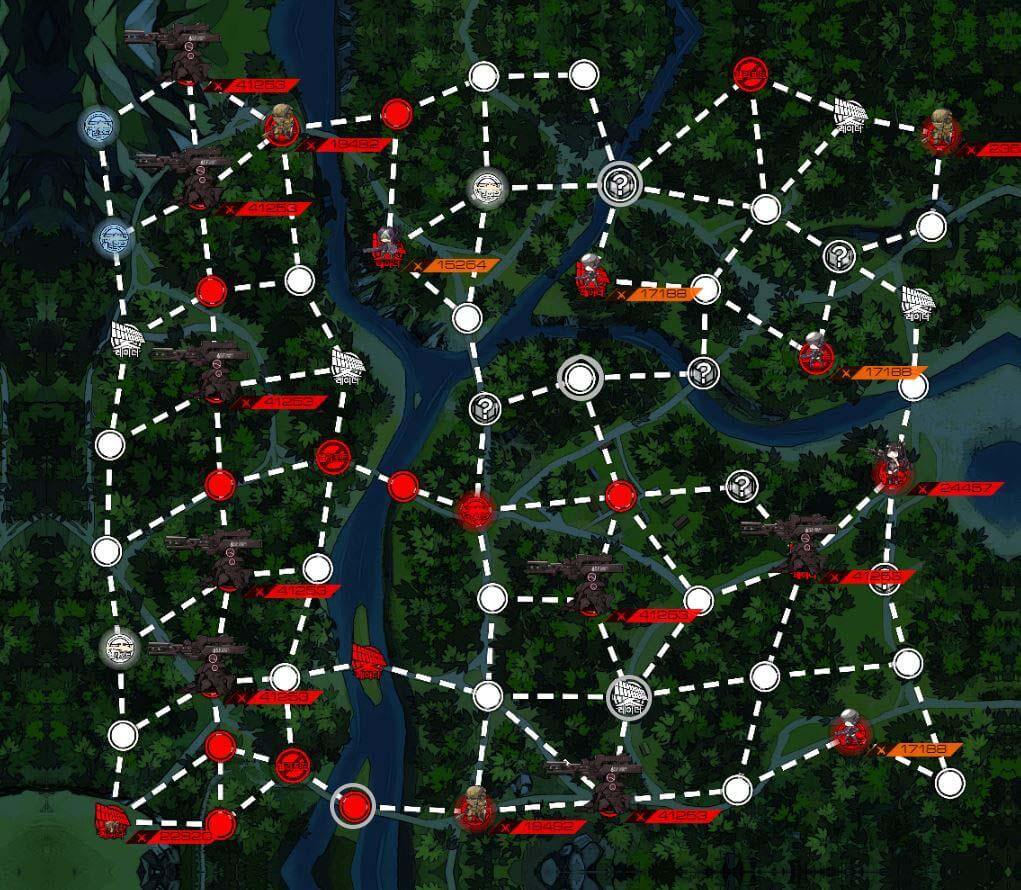 These nodes circled in gray have a chance to spawn 3 Jupiter encounters. 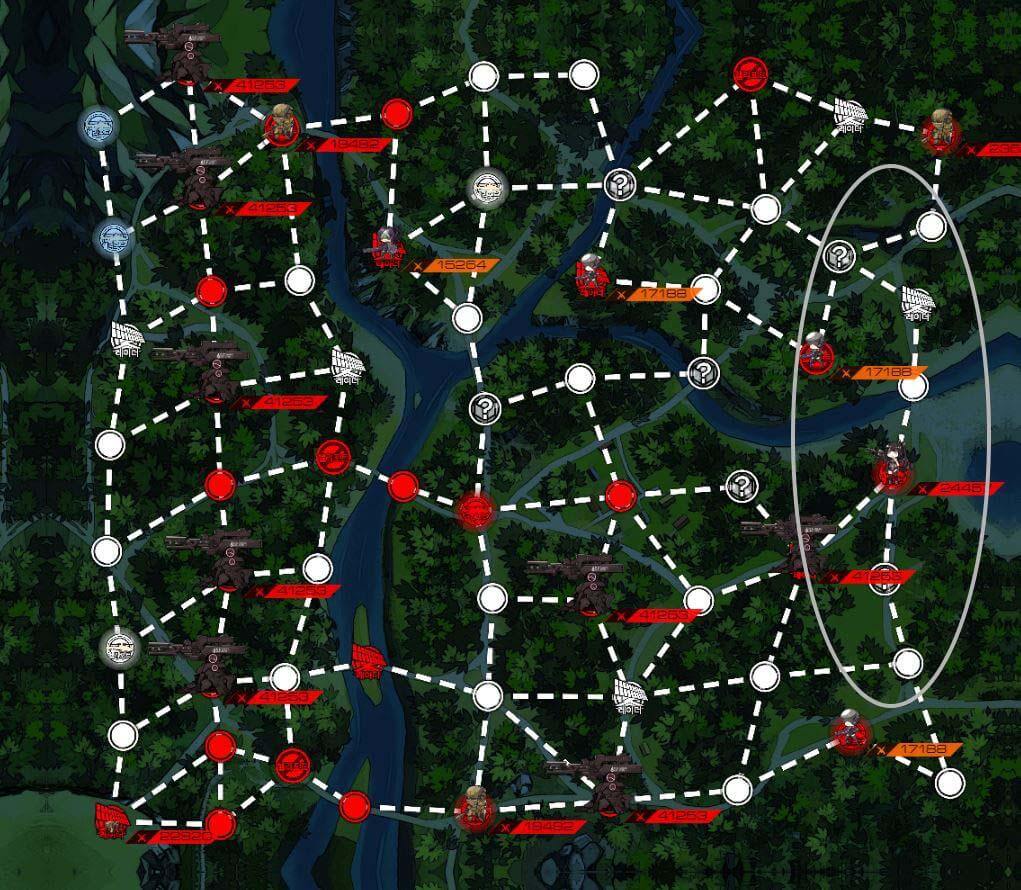 Another point of note – Architect, contrary to previous maps, does not spawn in a random location. Her spawn location is limited to the area circled in gray above. 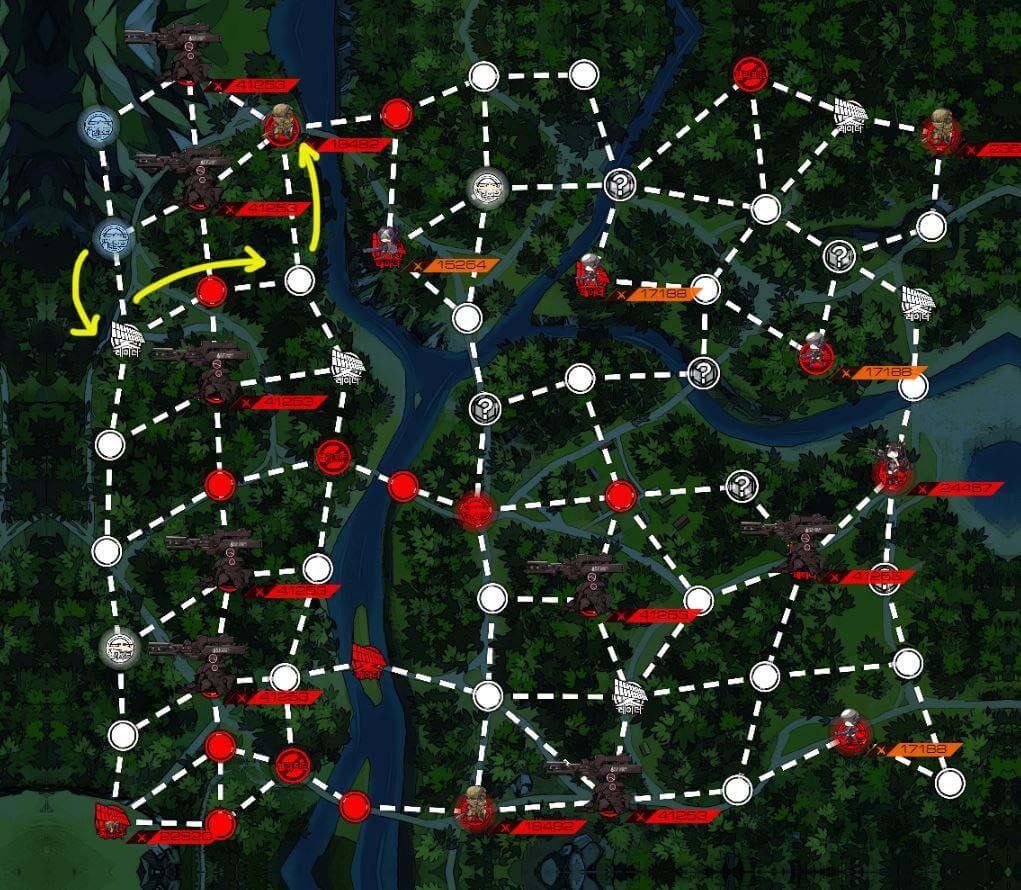 On the first turn, move the Echelon on the lower Heliport around the two Jupiters to the node shown above. 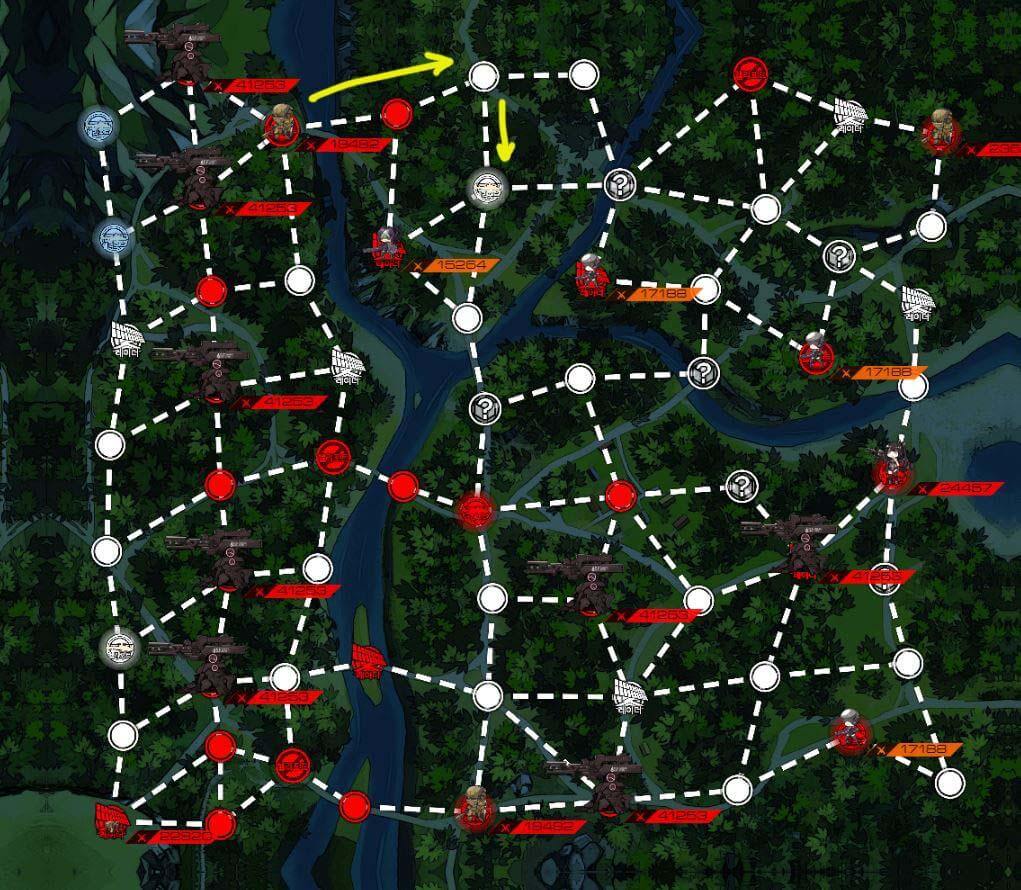 On the second turn, move Echelon that is not on a Heliport to the Heliport next to the ? node and end the turn. Replenish ammo and rations on turn 3. 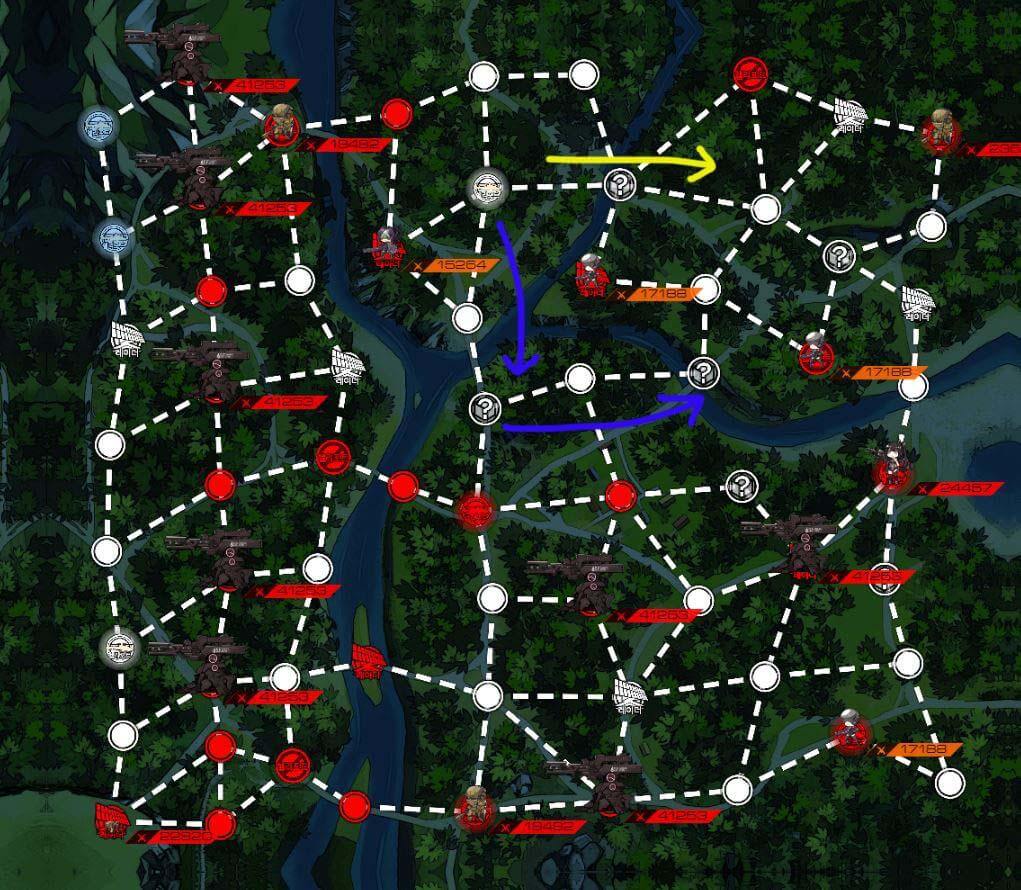 If there is no Jupiter or if the Echelon is strong enough to battle a 3 Jupiter Echelon, follow the yellow path towards the region where Architect has spawned. If not, follow the blue path. While it’s likely that at least one of the two paths are safe, there’s a chance that both of them have Jupiters. If that is the case, it is recommended to either try to brute force the Jupiters or simply retreat and try again. 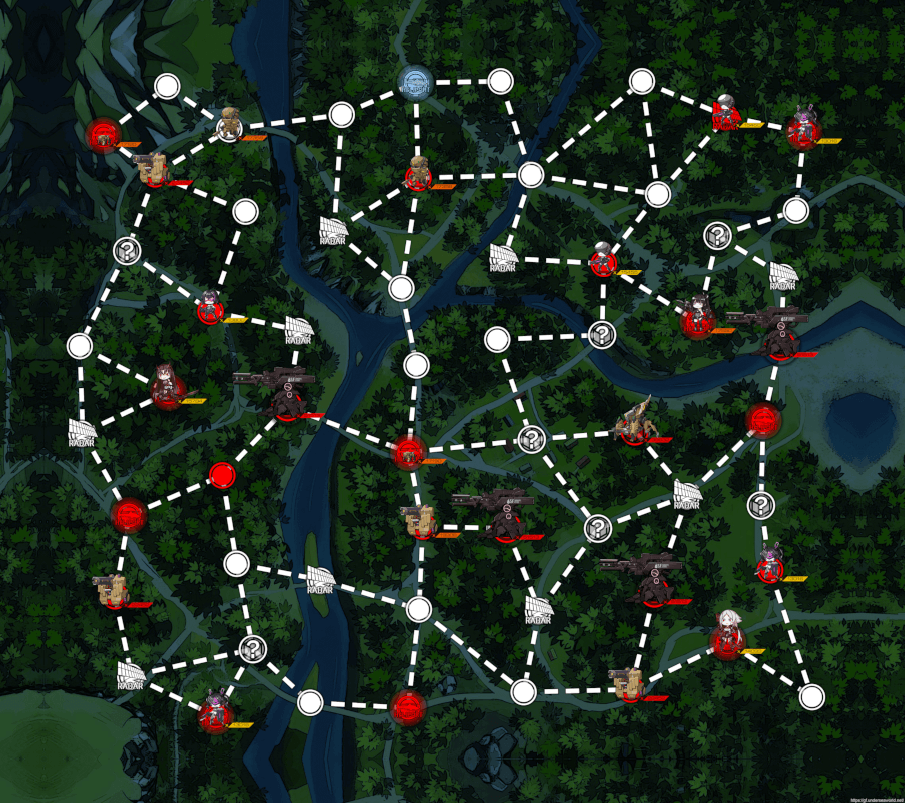 The map for E2-4, Reverse Sequence.

E2-4 is the fourth ‘new’ map which, like all the ones before, requires 4 clears for completion, and its clear reward is a shiny medal you can put on your profile and in your dorm. The map layout is actually exactly the same as E1-4, but with the enemy difficulty ramped up and powered down versions of the previous 3 bosses to make your life harder.

Due to the tarantulas that you are almost guaranteed to encounter here, either MGSG Echelons or fast Grenadiers are practically required to survive. 5x Linked Echelons that are fully or nearly fully enhanced are recommended due to how much damage enemies will deal, and if you plan to use only ARSMG, proper micro is required to avoid taking heavy damage from the armored units.

Like E1-4, you’re hunting Ouroboros, but unfortunately the Ouroboros finder won’t work here. Thankfully due to higher enemy count and adjusted positions, there’s only three places she can spawn – the three unoccupied enemy Helipads. Only 2 of those 3 Helipads can confirm her having spawned there, so that means you can safely ignore the Helipad on the right side of the map. 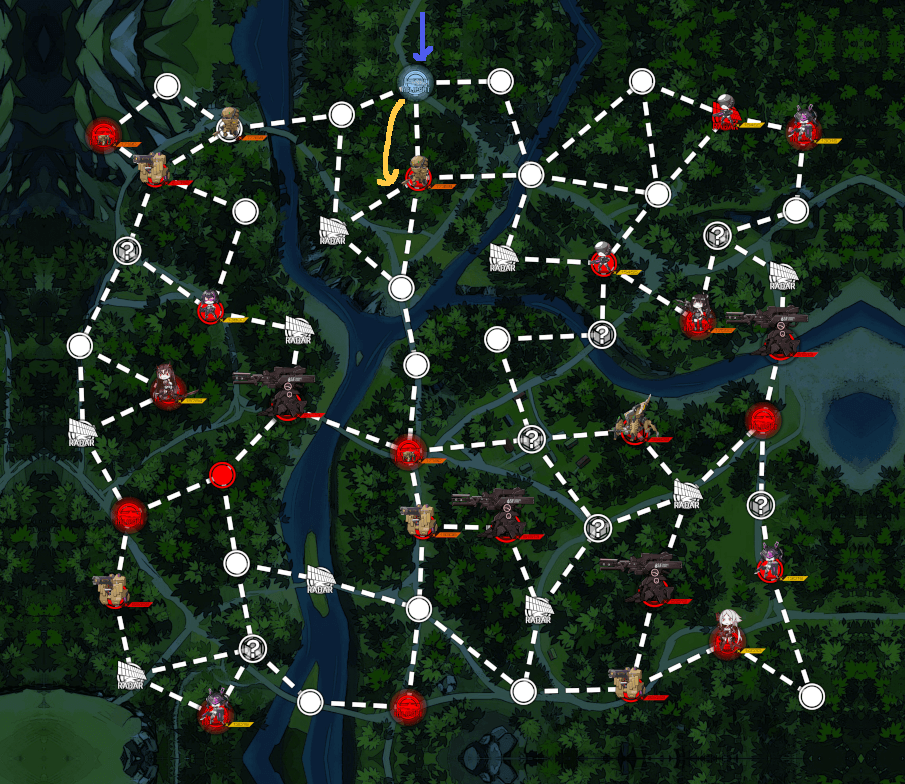 Like in 1-4, on turn 1 deploy an Echelon, move them down one node,. deploy another to defend the Heliport, then end your turn. 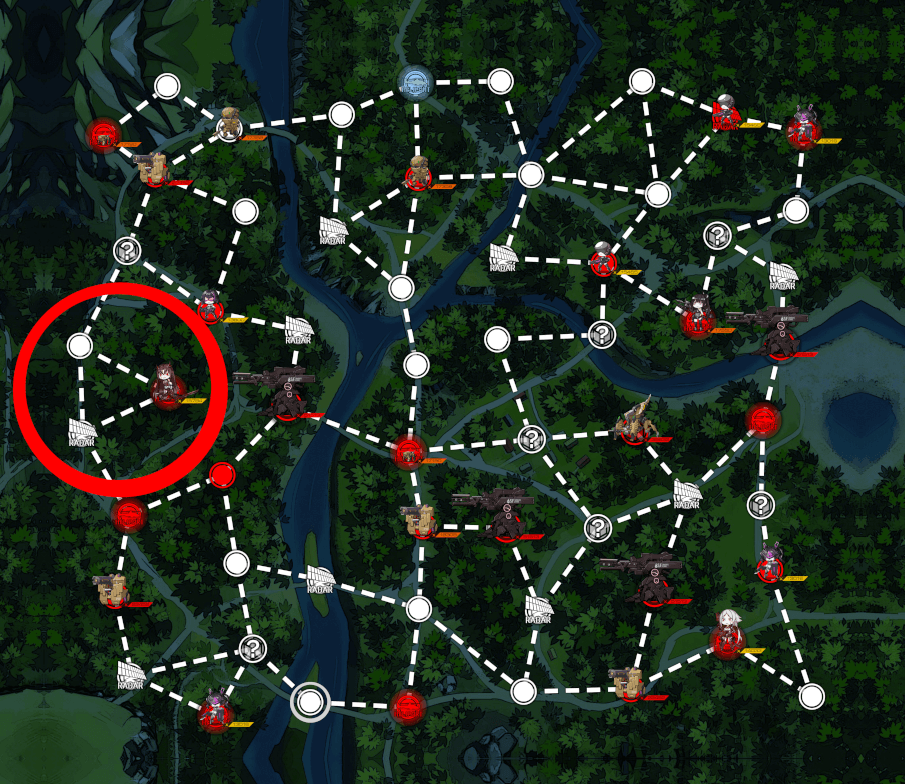 On turn 2, check for the tiles within the red circle all turning red, or the tile within the gray circle (near the bottom of the map) turning red. Either scenario confirms where Ouroboros has spawned. If neither happens, it becomes near impossible to figure out where she spawned and as such you should restart. Since a successful battle with Ouroboros in the red circled area requires either somehow avoiding Executioner Elite or an alternate undamaged team, this guide will focus on how to reach the bottomost spawn point for ease of convenience. 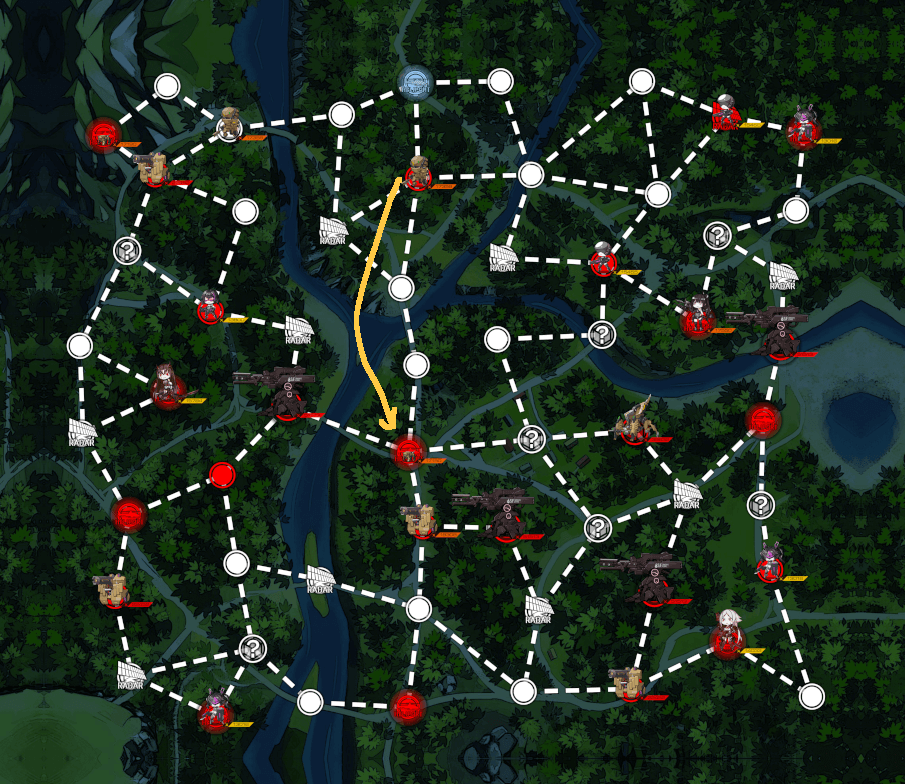 Continue with your Echelon to the heliport in the middle of the map, then end your turn. You'll likely have to fight the tarantula, so be prepared. 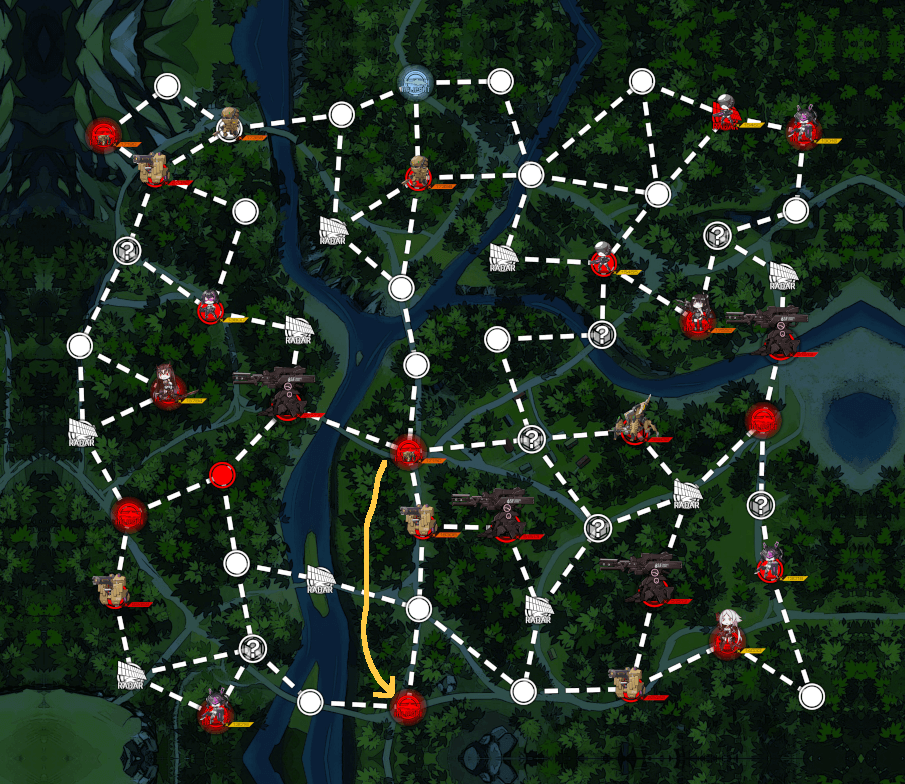 On your next turn, move down one tile, then either deploy your Ouroboros-fighting Echelon if you haven't already, or continue towards the bottomost Helipad. If you haven't seen Ouroboros by this point, end your turn on the Helipad, then continue west until you find her. 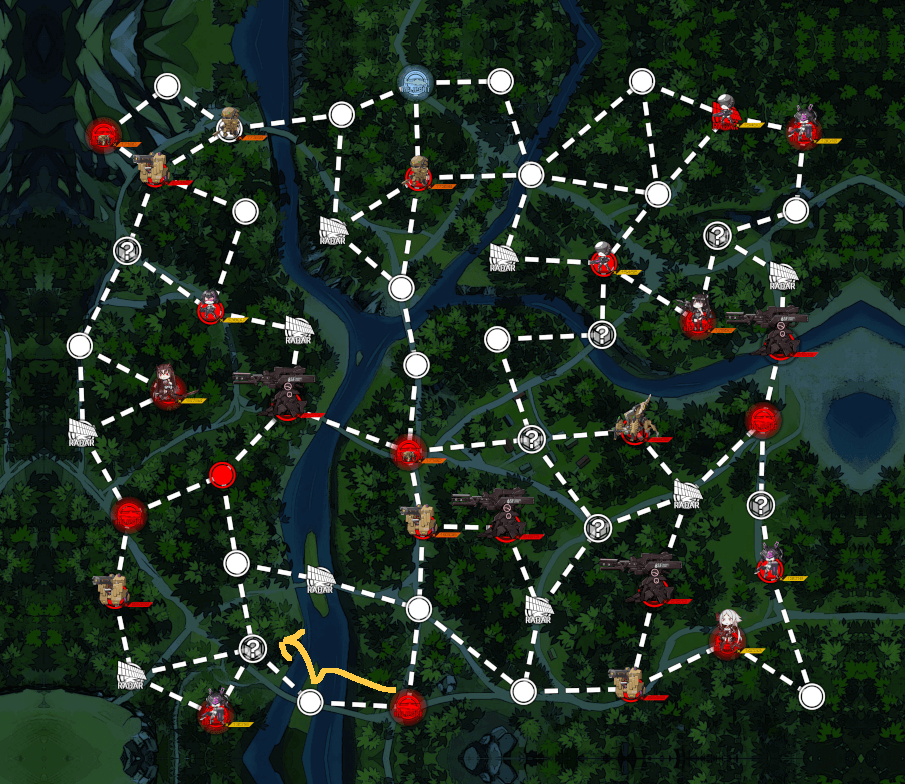 If you haven’t found Ouroboros by the time you reach this random node, you might have misread the map and need to restart.

For the fight itself, it's essentially the old Ouroboros fight – she simply deals more damage and has more HP. Move up your frontline as soon as the fight starts to destroy the manticores so fire can be safely focused on Ouroboros. Try to keep your units separated enough so that they can easily dodge her mortars because they will immediately send a T-Doll to critical if they hit.

And… that's all for Cube+, since this a rerun from before event currency was common, there's nothing you need to farm. If you've missed a limited T-Doll in the past, you can farm them fairly easily on Chapter 1, but otherwise, there’s nothing more to be done.

AKA Chen The Iffy

Site Lead for the GFL Site, y'know, this site.

Played for a bit on CN and since Day 1 for EN.

You can contact me on the GamePress Discord, I change my discord tag a lot so just look for a staff member with Chen in the name.