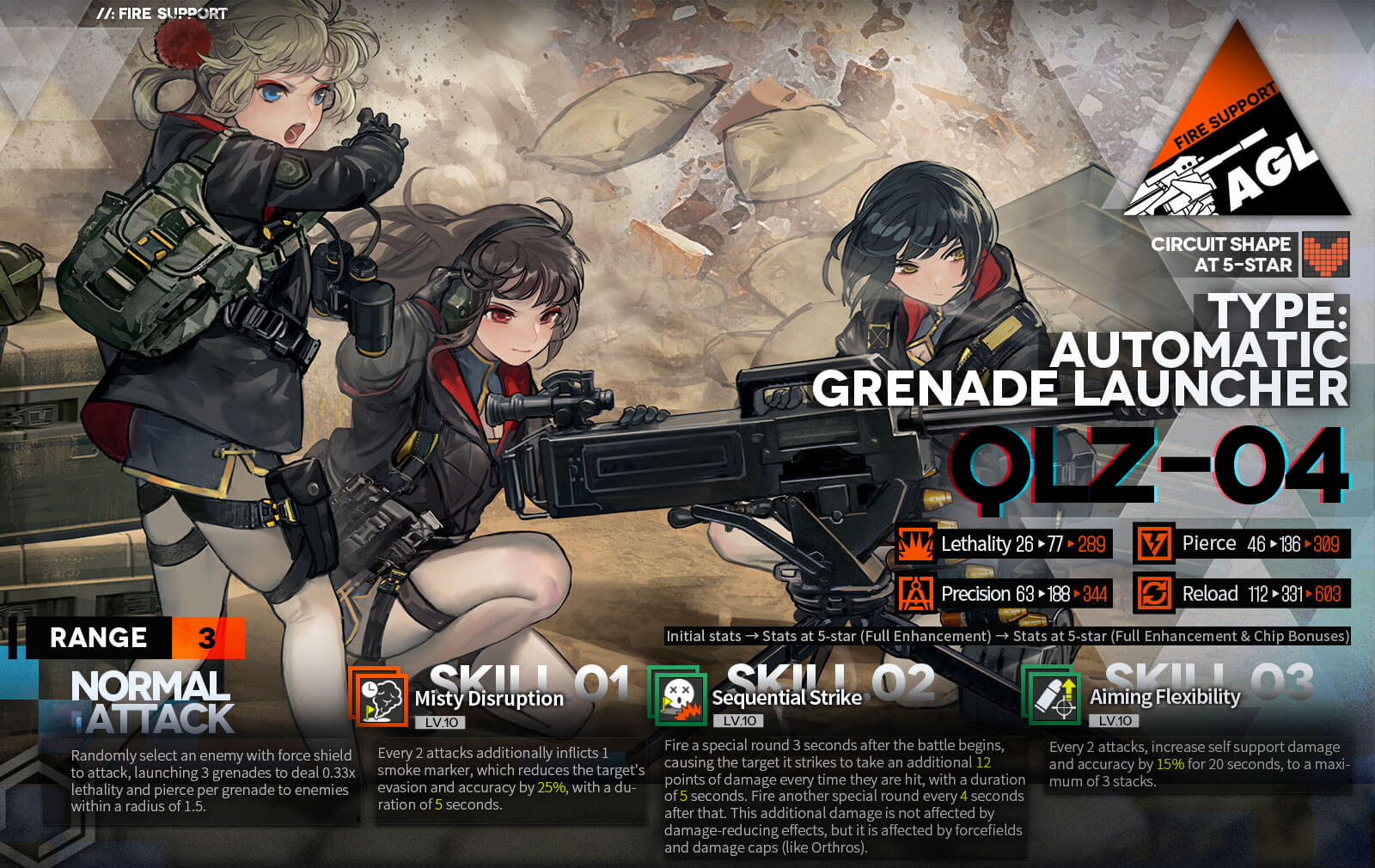 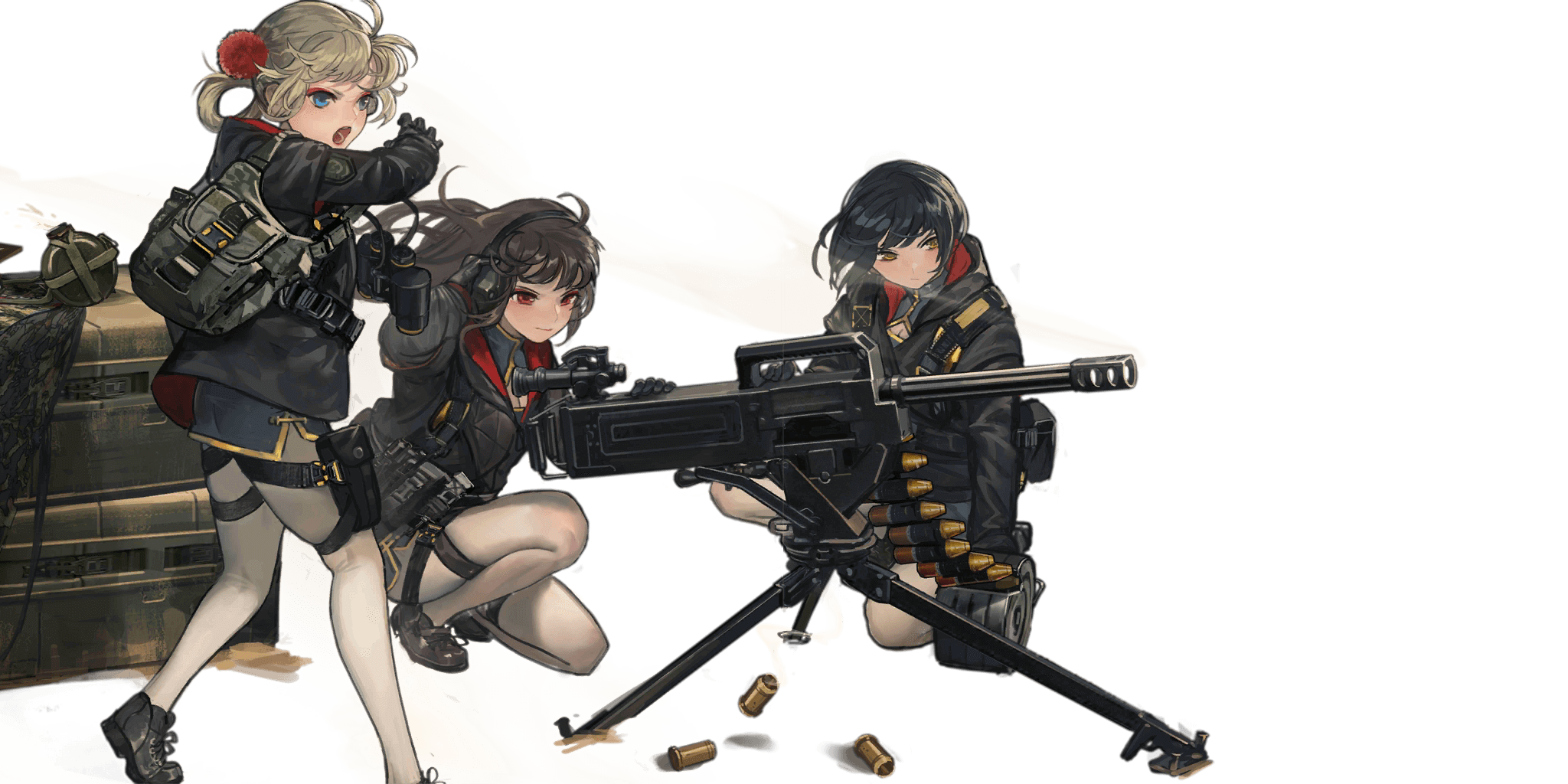 QLZ-04 is an automatic grenade launcher like AGS-30, and functions similarly. QLZ-04's most important stats are Reload and Pierce, and in general works extremely similarly to AGS-30 in practice despite the differing kit.

With her 3 range, QLZ-04 does a decent job at demolishing enemy artillery units and structures when 2-range HOCs are too far, and can provide some long range shield-breaking support in a pinch. While QLZ-04's ability to pierce enemy force shields isn't as potent as BGM-71 or AT4, she will still see use in situations that either demand more fielded HOC units or require the extra range she offers.

QLZ-04 is a HOC with relatively low Pierce stat but an extremely rapid rate of fire thanks to her high Reload stat. While QLZ-04 doesn't fire quite as rapidly as AGS-30 or have as much Pierce per shot, the two of them are similar enough for QLZ-04 to be considered a weaker replacement for AGS.

When the player is done raising all other HOCs to Level 60 and has spare resources, QLZ-04 can be raised to level 40 then 60 so that she can equip 5★ Chips to raise her two most important stats, Reload and Pierce.

Each of QLZ-04's shots is actually a triple grenade hit dealing 0.33x Lethality and Pierce in a 1.5 radius AoE, just like AGS.

QLZ-04's targeting priority is fairly complex; the below is an educated guess based on limited testing and may be updated later.

Since QLZ-04's Pierce stat isn't as high as AGS-30 and she also doesn't have the luxury of a skill that improves her shield breaking ability, QLZ-04 won't be a particularly good choice as solo support when it comes to breaking down a significant amount of Force Shield. Her regular damage is fairly lacking too due to a low Lethality stat, and it's not recommended to use QLZ-04 as the only HOC support when facing enemies whose Force Shield must be depleted.

Furthermore, QLZ-04's debuffs are only applied to her primary target unlike most other HOCs that affect every single unit in their attack range.

While it will be fairly rare for QLZ-04 to see use over the other HOCs (especially since her rarity will be locked to 4-star or lower until Theater 4), her 3 range and decent Pierce does mean QLZ-04 won't be totally worthless in situations where the player needs as many HOCs as possible.

Demonstration of QLZ-04 used as the only HOC support vs. fully shielded Uhlans.

The QLZ-04 Grenade Launcher is a Chinese grenade launcher that replaced the older QLZ-87 in 2004. The launcher is backwards-compatible with older ammunition, but can be belt-fed. When fully loaded, it's slightly heavier than the AGS-30. 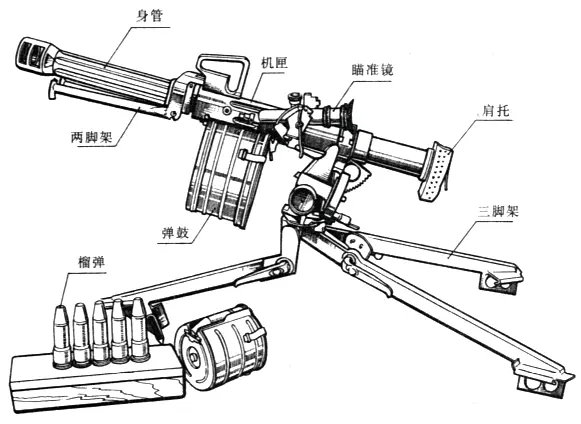