Should I Use MGs? 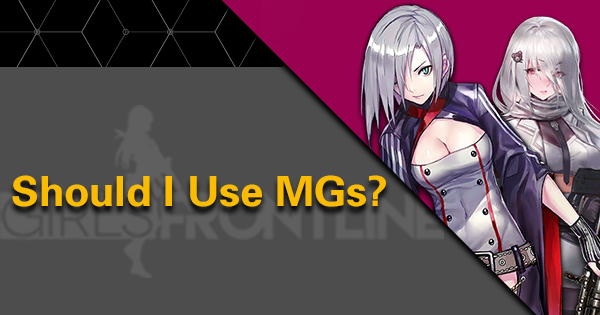 In the previous guides, the usage of most types of units were covered: ARs and SMGs were discussed in the context of an AR+SMG echelon, while HGs and RFs are typically combined in an HG+RF echelon. There is, however, one type of unit that hasn’t been mentioned at all -- the MGs.

The MGs are units specialized in burst damage, and unlike other types of T-dolls, MGs must reload after each volley. The size/duration of that volley is determined by their base stats and a type of equipment called Ammo Boxes. MGs also consume much more Resources than other T-Doll classes and only receive dedicated buffs from the Heavy Production exclusive Shotguns (SGs). Therefore, that brings up the question -- should beginners and semi-intermediate players use MGs?

As it stands now, it is unnecessary for beginner or semi-intermediate players to use MGs in most situations.

One of these reasons is obvious; SGs, the buff counterpart to MGs, are only obtainable through Heavy Production, a type of T-Doll production that consumes more Resources and also uses Cores. MGs give buffs to SGs, while also receiving buffs from them, meaning that using an MG results in a buff that is wasted if a player does not have an SG. This, however, is not the most important reason as to why MGs are used with SGs -- which is an SG’s ability to tank consistently due to their ability to equip armor Equipment. This allows MGs to be wholly protected if they need to reload their volley; while ideally they’d finish off their opponent with the first volley, there are other factors (such as a foes’ high EVA) that can cause a fight involving an Echelon containing MGs to drag on for much longer than usual. SMG and HG tanks simply can’t take the same amount of punishment as SGs, making them unsuitable for pairing with MGs. Until players can comfortably craft using Heavy Production, then, using MGs is ill-advised. A guide on Heavy Production can be found here.

Another reason for beginners and semi-intermediate players to not to use MGs is that regardless of whether they possess SGs, MGs are generally mid-to-late game plan B units that are used against content that cannot be handled with another Echelon. This is due to the Resource cost of running MGs, as MGs are simply the most Resource-costly units in the game to run. By using an MG early in the game, you are simply using more Resources to use a unit that can barely outperform other units. This also means that they are extremely costly to level up, meaning that your Resources are being consumed by the MG instead of being used to produce additional T-Dolls or Equipment

Situations where MGs can be used

There are, however, a few situations in which the usage of MGs in early game can be justified.

The first and quite possibly the most valid reason to use an MG is that they allow you to shred through the armored foes found in Night battles. Early on, many new players have trouble KOing armored enemies with low-level AR+SMG Echelons. Although leveling a HG+RF Echelon would be a better solution to this issue, many new players may not wish to invest even more time leveling a whole new Echelon. In this scenario, players can instead replace an AR with an MG -- as MGs can also equip Armor Piercing (AP) shells, they also perform well against armored units. Do note, though, that the previously mentioned downsides to using MGs still apply. This can be very Resource-costly for a new player, and once again is not highly recommended.

Another somewhat viable use for MGs early game is in Data Simulations. As your Echelon does not get attacked in Data Simulations and do not consume any Resources, MGs can be used with HGs or SGs -- utilizing the non-class specific buff from HGs, MGs can significantly outperform ARs under the conditions of the Data Simulation. Because of this, MGs can be used to achieve lower times in Data Simulations earlier on. It is to be noted, though, that a leveled AR+SMG Echelon and a leveled HG+MG Echelon receive a similar amount of data chips, not to mention the immense amount of Resources that must be spent when leveling any MG. Therefore, unless possessing a low completion time on a Data Sim matters to you, leveling MGs solely for this purpose is also not recommended.

So, should you use MGs? For most beginner and semi-intermediate players, the answer will be no -- the relative scarcity of their buffing counterparts and high Resource cost makes MGs unsuitable choices in the early game. Once you have started to accumulate more Resources, have crafted some SGs from Heavy Production, and can farm Logistics efficiently enough to support leveling MGs they become significantly more viable though, and may even become an integral part of one of your Echelons.