Should you Farm: Singularity Limited Drops 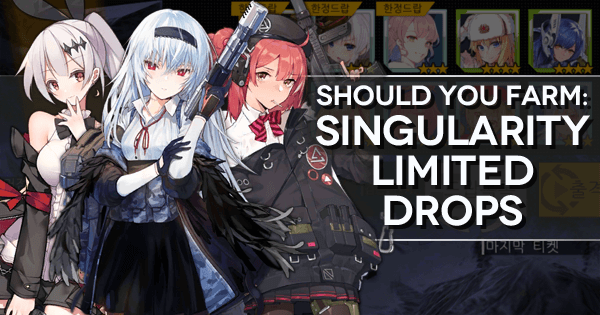 11/19 update: If you got to this page trying to figure out how to efficiently farm Supply Boxes in Singularity, click here.

Now that the massive lineup of 15 limited drops have been revealed for Singularity, the question of which T-Dolls are worth farming becomes all the more important due to the time-limited nature of the event. This article provides a quick overview of each farmable unit, and an optimized farming path will be provided once the Singularity event is released on Nov. 19th. 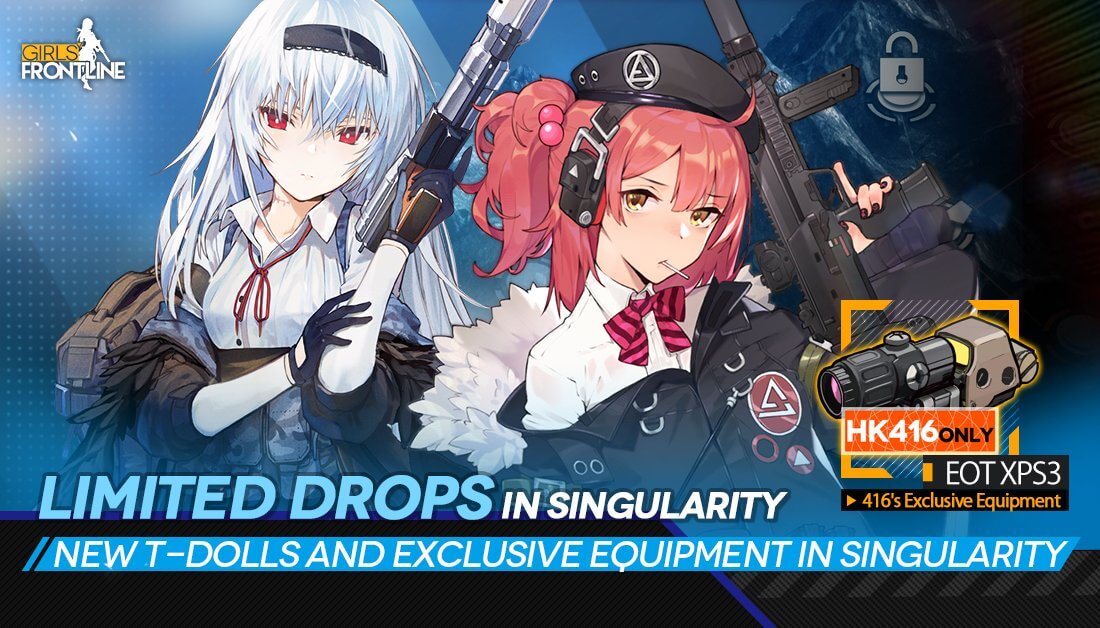 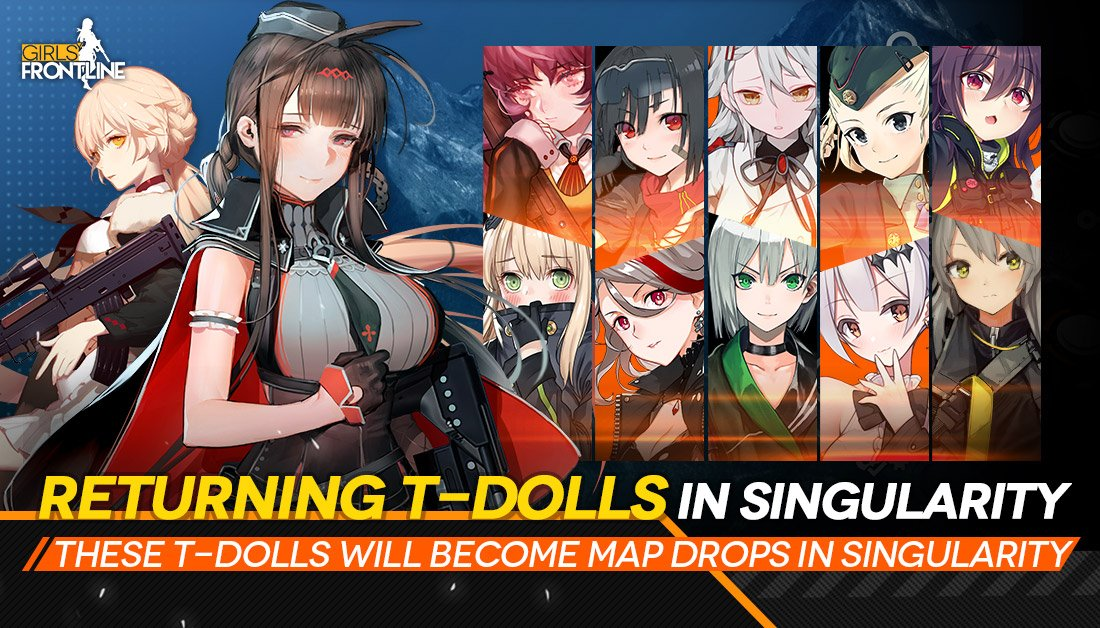 Each Limited drop can be obtained from various enemies on the event stages, as well as from clearing the map. As S-ranking the map often takes a very long time compared to just farming the nearby units, it is not recommended to S-rank the maps except where specified.

(Auto-battle is not available for the Singularity event stages.)

Some limited drops will be available in the Campaign version of Singularity, while others are limited-time drops and are missable - Commanders who do not mind waiting a few months for Singularity to be added to Campaign may elect to forego the farmable 3★ T-Dolls this time around, and focus on rescuing the exclusive rare T-Dolls they want.

For information about preparing for this event, please check out the following page.

MP7 can be farmed by killing the enemies near HQ and retreating. (While 1 echelon can do it, much more restarting is required.)

MP7 is essentially a direct upgrade to Suomi in every way, with a much better Evasion stat, a Skill that both provides a higher multiplier and appends an additional movement speed buff, and some may even say superior art. (MP7 doesn’t have a Live2D costume, however, so Suomi has that going for her.)

Due to Moon Dancer’s long initial cooldown, MP7 only really excels in drawn-out fights against bosses that need to be evasion-tanked, such as the Agent encounters in Singularity.

As these fights are rare and can often be handled just fine with existing Evasion SMG tanks such as Suomi, players who already have such SMGs leveled should not find it necessary to farm and level MP7 before attempting them, even if MP7 would do the job slightly better.

Thunder can be farmed by clearing the map.

Thunder is a very unique HG whose Skill focuses on firing a high-powered burst damage bullet rather than providing a buff to her teammates. While Criticality Shot has a very low initial cooldown of 4s, it can miss, causing Thunder to re-aim and try again after 2 seconds.

This niche is not typically very useful nowadays due to the ballooning HP values of enemy bosses making it hard for Thunder to one-shot them, not to mention the fact that bosses tend to have enough Evasion to make Thunder miss frequently.

Thunder’s extremely high Damage stat and Skill multiplier do allow her to deal approximately 50% more damage than CZ75 when the bullet finds its mark, however, so enterprising Commanders may still find a use for Thunder if they looked hard enough.

EOT XPS3 can be farmed by clearing the map.

The EOT XPS3 is a farmable Special Accessory Equipment for HK416 that is essentially an EOT Holographic Sight with the RoF penalty removed and replaced by a respectable +25% Crit Rate buff.

Despite its lower Crit Rate compared to a VFL 6-24x56 Optical Sight, the EOT XPS3 actually manages to maintain 416’s regular attack DPS at a similar level while substantially boosting her Anti-Personnel Grenade’s damage, making it the best-in-slot Accessory equipment for her during the day, significantly increasing 416’s effectiveness both in regular combat and when dragging 0-2 or 11-5.

Unfortunately, as all ARs tend to require a PEQ at night, this special equipment will not see much use during night battles, such as Singularity’s Ranking stage, Hornet’s Nest.

Groza is known as the “Night Queen” due to her incredible 200% Damage self-buff at Night, putting her firmly ahead of the pack in terms of Night AR DPS, other Dolls needing Special Equipment (9A-91), or a MOD (As Val), to compete with her during the night.

Given the prevalence of Night Maps during Events, Groza is a solid pickup for any Commander, and her performance will not disappoint.

DSR-50’s niche of being the strongest single-target Nuke against Armored bosses evaporated immediately after Deep Dive ended due to the release of TAC-50, and the bamboo rework that came with the New Client did little to improve her situation as a difficult-to-use RF with questionable return on investment for training.

Nevertheless, she is a limited-time drop from Singularity that will not likely be available again in the near future, so Commanders looking to collect DSR-50 or use her Highest Bidder Live2D Costume would likely find Singularity to be a good opportunity to do so.

wz.29 underperforms relative the vast majority of RFs, due to her subpar base stats, lackluster Skill, and to add insult to injury, her Tile Buff positioning isn’t great. While her HP is unusually high, health is effectively a useless stat for RFs and doesn’t affect wz.29’s viability. wz.29 will therefore struggle to outperform her peers even with dedicated team support.

As a result, wz.29 is unlikely to end up as nothing more than a trophy or a collection checkbox, as she lacks a costume or upcoming MOD.

M12’s EN debut was unfortunately eclipsed by Z-62’s Cube+ return, although she is still a solid Incendiary Grenade SMG offtank. While M12’s Evasion stat isn’t quite up to par with her peers, she makes up for this with an incredible 1015 HP that bolsters her survivability significantly.

While the 8% Damage provided by M12’s tile buff may not be much, especially when compared to Skorpion’s 15% RoF 50% Accuracy tile, M12 does deal slightly more damage than Skorpion with her Incendiary Grenade. Commanders looking for some variety in SMG offtanks that missed M12’s debut may find it worthwhile to try and farm for her.

Gepard M1 represents another entry onto the Bamboo RF list that fails to keep pace with NTW or M99. Her base stats fall below the thresholds set by comparable RFs, notably in Damage, which is a key stat for Single Target damage. While the rework to Bamboo Skills will benefit her to a small degree, her innately lower Damage Multiplier will still hold Gepard M1 back.

For those who pulled her costume on the recent Maid Gacha, but did not get Gepard M1, this is a good time to pick her up to make some use of the costume.

Serdyukov is often called a “discount SAA” due to their striking similarity in Skill and tile layout, and it is for a good reason. Serdyukov features slightly lower Evasion and HP when compared to SAA, but due to her Buff Tile Layout, she is unlikely to be positioned on the frontline. Her Tile Buff loses 10% Accuracy when compared to SAA, and a 2% Damage from her skill buff.

While SAA outclasses Serdyukov across the board, she remains a viable budget option, or a fill in for Commanders lacking SAA.

P226 and her seal feature a passable set of stats for a backline HG, along with an enemy RoF debuffing Skill. Buffing Accuracy and Damage with her Tiles, she slots into a variety of teams, although plenty of other options will perform as well or better than she does in her role.

Having been available quite recently from the Neural Upgrade Login event, many Commanders will already have P226. For newer players, or those who missed that Event, P226 offers some variety in HGs, and features a truly adorable victory animation.

TMP is an oddity, as her Skill buffs her Evasion, while her Buff Tiles are more suited for an Offtank. More confusingly, her statline features a solid Evasion stat, but abysmal HP, which limits TMP’s tanking ability quite a bit.

Any usage of TMP will be a bit awkward as her Tile Buffs are unsuited to the main tank position, and her Skill is unsuited to the Offtank position. Should Commanders wish to build around her weaknesses and not mind swapping TMP to the maintank slot during battle, she will provide serviceable performance, but will not be substantially different from other Evasion boosting SMGs, including the Singularity unique MP7, Suomi, and the free RO635.

As a Shotgun, M1887 works just fine in her role of tanking incoming damage due to having one of the highest HP values amongst shotguns. Her Tile Buff only affects the position directly behind her, however, which will hinder her use on traditional MGSG squads. Like many SGs, her skill is nothing impressive, with a long Initial Cooldown, and a fixed amount of Damage dealt.

For those lacking for solid SG options, M1887 is a possible choice, but she will inevitably be overshadowed SGs such as SAT8 or KSG, and fails to serve as a budget option due to the new availability of SPAS-12 from the revamped Career Quests.

JS05 is another entry into the list of RFs with skills relegate them to niche uses at best. Her Skill, Piercing Shot, functions similarly to traditional Bamboo skills, except it features a lower Damage multiplier, and pierces all enemies on the way to the target.

While this sounds like a useful gimmick at first, in practice JS05 will underperform compared to other RFs, as the low damage multiplier and poor area of effect combined cause the skill to be unsuitable for either mobbing or dispatching a single target.

Almost memetic for her rarity on other servers, Five-seveN lives up to the hype, delivering massive boosts to Rate of Fire and Crit Rate with both her Tile Buffs and Skill. Thanks to the recent release of Px4 Storm, Five-seveN’s value skyrocketed, as this duo provides a fantastic boost to the DPS of any Echelon they are slotted in. Backing up these traits are a strong set of stats,

While her rarity is lessened on EN, having been farmable in two prior events, Five-seveN’s value remains excellent for both the current Singularity event and many upcoming future events. As a staple pick for variety of team compositions, Five-seveN delivers fantastic value to all Commanders.

UMP 40 occupies the unfortunate position of being outclassed in either role she attempt to occupy by other, easier to obtain Dolls. Her Skill, Etching Overload, provides a stacking buff to either Evasion or Damage, while debuffing the opposite stat. Unfortunately, UMP 40 is outclassed in the role of Evasion tank by most other options, and as a DPS SMG SR-3MP will outclass her completely, and even C-MS will better for the majority of the fight.

Besides her unique Skill, the most notable thing about UMP 40 is her Tile Buffs, which provide a whopping 500% Critical Rate increase to SMGs. In practice this is less impressive than it sounds, as SMG’s feature a base crit rate of 5%. While equipping a Suppressor will precisely increase an SMG’s crit rate well past 100%, DPS SMGs tend to prefer using either ITI or EOT scopes to improve Accuracy, which limits the value of this buff substantially. Story importance or not, UMP 40 will struggle on the battlefield.