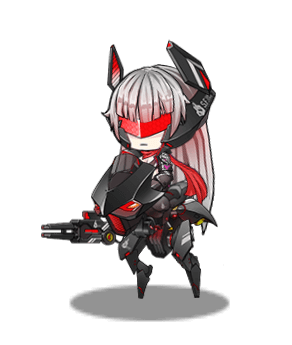 SWAP Dragoons do their best to imitate the enemy we have come to know and fear, but have a high threshold to overcome when compared to Manticores.

Stat wise, SWAP Dragoons are in good stead for an unarmored unit. With High HP and respectable Evasion, they can make good use of their Shields, and have enough RoF to apply their Debuff reliably, and can back this up with a surprisingly high Damage stat. The lack of Armor cuts into their durability, but their Skills go some way to mitigate this issue. Do not get tricked by the slightly boosted AP, it is unlikely to make a significant difference in performance.

Skill wise, Arrester is the star of the show giving SWAP Dragoons a massive 180 HP shield at the battle start, with additional shields every 10 seconds, along with stacking Damage reduction. This alone is a powerful survival tool, effectively boosting the HP pool of SWAP Dragoons by a considerable amount, and giving them enough shield to actually tank some of the more powerful attacks that have appeared in newer content. As the icing on the cake, they get sizable Damage/Rate of Fire boosts while the shield is up. If the shield breaks, SWAP Dragoons try and survive longer with Evasion buffs, but this is less useful, due to the diminishing returns on Evasion.

Blade Prison doubles down on the survival features, applying a single stack of Damage and Accuracy reduction to the target. While this is not always going to be a boost to the SWAP Dragoon’s survival chances, as large groups of enemies will not all be debuffed, but against fewer enemies, or towards the end of Longer battles this will help stretch the SWAP Dragoon’s a bit further.

In the end, SWAP Dragoons will remain in the shadows of the mighty Manticore, as their lack of Knockback or massive AoE Damage makes it hard for them to compete.