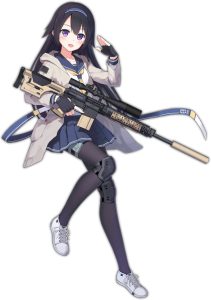 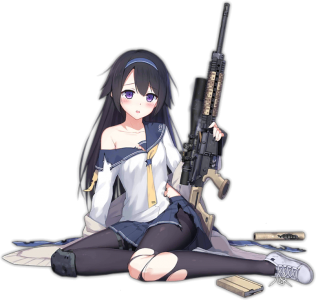 A 3 star RF bamboo, Super SASS is one of the drops in the Arctic Warfare Campaign. That alone seals her fate as a 3 star destined to be forgotten (if not for her mod) as AW campaign is downright awful to farm, especially by new Commanders, while veteran Commanders will have a surplus of better bamboo RFs, like NTW-20, Mosin and Springfield, who can do SASS’ job better (not that those bamboos do a lot in the first place).

The only reason for a Commander to ever go out of their way, like I did, to acquire her, is either because they like SASS, or they like SASS Mod or they are a completionist and want the rewards from the Base Overview Teams.

Or they like high school girls in sailor uniforms holding guns. Or they play Blue Archive and want a BA vibe in their Girls’ Frontline as well.

Sometimes it feels like that, for great Mods to exist, awful Mods must also exist. There is no balance, only great Mods and awful Mods. In Dual Randomness, SASS arrived with 97S Mod, G11 Mod and RO635 Mod, where the two 6 star Mods comfortably sit at the pinnacle of “great Mods”, while SASS…

SASS doesn’t quite reach the bad levels of Bren Mod, IDW Mod and 97S Mod, but she tries to. Her Skill 2 is essentially a poorer version of NTW Mod’s Skill 2, where it relies on the amount of charges she had before shooting her Skill 1. Moreover, those Follow-Up shots are just normal shots that have perfect accuracy, which essentially means that she becomes M200 for a couple of shots if her target didn’t die to her bamboo shot. Her stat buffs bring her up to roughly the level of Springfield with her Ammo Night SPEQ, which is not an encouraging benchmark.

As bamboo RFs are rarely used in newer content, and even in mid game content they already fall behind generalist RFs, SASS Mod utterly fails to make herself any more relevant than her pre-mod version.

Seriously, that’s her only strength. She is cute.

Being a 3 star unit that is locked in one of the worst farmable maps seen in Girls’ Frontline (Arctic Warfare at least is less worse than Cube) means that new Commanders acquiring her is too much of a hassle, while older Commanders will already have better RFs, and better bamboos, to use.

SASS has a meager 115 Damage stat, which lags behind Garand’s 120 Damage. That directly impacts the potential of her bamboo shot, in a negative way. With Garand having more FP, and just two points less of RoF, there is no reason to go after SASS when Commanders often acquire Garand when crafting RFs.

As if being locked behind Arctic Warfare’s maps, and being a 3 star didn’t seal her fate, the fact that she is a bamboo RF did. Bamboo RFs scale pretty badly with GFL content, and are often left aside for generalist RFs like M14, or niche RFs like Carcano M91/38 “Grape”.

A crit scope that grants 48% crit rate nd +10 damage sounds like the perfect SPEQ for any RF. Too bad SASS Mod is not useful enough to make the most of it.

Her Mod III art is a major upgrade over her kawaii sailor uniform armed highschooler, and the yandere-ish vibe will appeal to many Shikikans. Also she can teleport now. We at GamePress approve this upgrade.

She gets +10 Damage from her Mods, which fixes her low Damage base stat. Given that her SPEQ also gives +10 Damage, she ends up with a respectable 135 Damage.

Her Skill 2 basically just grants perfect accuracy to her normal shots based on:

If she has three perfect accuracy shots, and her target dies with less than three, then she loses the rest. Basically, she just wants to make extra sure that her target is dead. This is all before considering if she’ll even benefit from the sure hit, given newer content have day maps, where RF accuracy isn’t an issue.

Given that enemies don’t tend to stay below 50% HP for long, not only her FP buff is small against those, it’s unlikely many of her shots will make use of it. That also means leveling her Skill 2 is a complete waste of data.

If you somehow endured farming SASS, field her with FP HGs, as she will want as much of a boost to her low Damage as possible. For her partner, if using FP RFs remember to field a RoF HG to avoid corpse-whipping.

Due to her singular tile, SASS will want to sit on Position 1.

She no longer is thirsty for Damage buffs like her premod version, however, it’s still good to pair her with FP HGs. her partner should ideally be a self buffer, as her performance will be subpar due to a lack of self-buff.

Her tiles got an upgrade, but she will still sit in Position 1.

The ArmaLite SUPER SASS (Semi Automatic Sniper System) was developed by ArmaLite Inc. and submitted as an entry for the XM110 competition, which was announced by the military in November of 2004. Several companies submitted entries. This would include companies such as Knight’s, Remington, DPMS and ArmaLite. Although ArmaLite’s entry was not selected by the military, the company continued development and introduced what it calls the Super SASS in .308 Winchester at the 2006 SHOT Show for commercial sales.