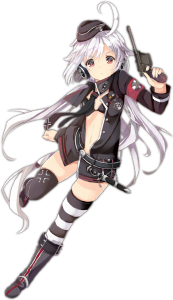 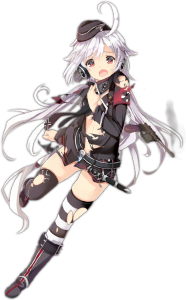 C96 is an accuracy-buffing flare handgun. Through the hand of MICA spaghetti, the flare skill and by extent C96 is rather worthless. While a 100% nighttime buff from her flare skill might initially seem nice, it does not actually negate the 90% accuracy debuff applied at night like PEQs do. Instead it is just a straight accuracy buff that is conditional to nighttime.

A complete lack of any extra damage buffs provided and a sole focus on accuracy buffing makes C96 really ineffective, as earlier there is nothing at night you will be fighting with that much evasion and no PEQs. ARs should have PEQs equipped at night, and RFs and MGs should not usually fight evasive units at night anyways. During later content, situations start to crop up where they do have to fight an evasive armored unit at night; however, there are still better options than C96, even when she gets a mod.

For example: Type 59 and SPP-1 are better alternatives than C96, offering both actual firepower buffs on their tiles and about as much if not more effective accuracy.

Despite prayers of many, MICA did not take the opportunity of C96 mod to rework flares into something more useful. C96’s mod notably provides her with a second skill that increases clipsize and crit damage along with her flare.

While her second skill seems oriented towards MGSGs since it increases clip size, her second skill’s dps increase is beaten by the tiles of HGs like Grizzly and MK23 on the first clip due to its 3 second initial cooldown, when MGs have already fired at least half their rounds. Additionally, MGs are hit too hard by the night penalty to make fighting night evasive units viable, making her accuracy buffs more pointless.

Because her skill provides an actual dps buff at 3 seconds, C96 Mod is a possible option for RFHGs that need to fight night evasive enemies. Since RFs have high enough accuracy to be salvageable at night and have a decent crit rate, they actually benefit more from C96 Mod. Her Skill 2 provides a similar dps buff to Type 59, except hers is in her skill.

Due to the fact that she needs more resource investment to perform similarly, it is usually more worthwhile to just invest in Type 59 or SPP-1 in the already rare niche of nighttime hit rate buffs. While mostly a waste, if one wanted to raise C96 Mod for some reason, Mod II would be the best point to stop since her skill 2 makes the most difference and her special equipment does not provide anything substantial.

With a quick initial cooldown of 3 seconds and a 15/16 second uptime, flare handguns have some of the best uptime for a skill that will not be useful.

C96’s tiles have no directly offensive buff, only more accuracy which is usually not needed early game when using budget options. and their awful shape forces her to position 5 to make the most of them, where no one can use her evasion tiles. Her evasion portion would only ever be provided to DPS and SGs, neither of which really care for evasion, making it a moot point.

The flare skill does not do what one would expect, and cannot replace PEQs.

Restricted to really only making a difference at night, C96 is not even good at her own specialization because of how bad her skill is, and is utterly useless at day.

61 is really low evasion for a handgun, making her squishier.

With her initial cooldown of 3 seconds, C96 mod’s skill buffs will come in earlier than most handguns, early enough to affect the first volley for MGs.

C96 mod’s 20% critical damage multiplier is outclassed by just the offensive tiles of the likes of Grizzly or Mk23, and even the two extra rounds do not make up for the first half a clip of DPS for MGs.

An increased multiplier on her skill does not make flares more useful, and C96 Mod’s Skill 2 alone is not enough to justify her over traditional DPS buffer HGs or evasion debuffing HGs