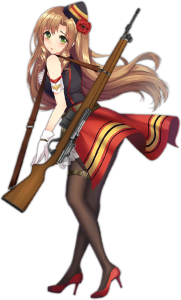 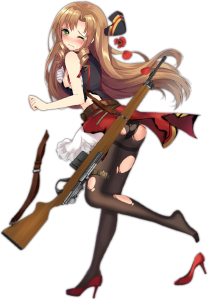 FN-49 is an easily accessible 2★ RF that is awarded at Lv. 35 3x linked from career quests and is also obtainable from standard T-Doll Production and as common a drop from many different maps.

FN-49 is hindered severely by her poor base stats. Due to relatively low Damage and low Rate of Fire courtesy of her common rarity, her self-buffing skill (whose multiplier is also lowered due to her rarity) cannot do enough to bring her DPS to competitive levels.

From the ashes of irrelevance arises FN-49 Mod.  Sporting her new flashy 4★ attire complete with a heart-melting smile, her digimind upgrade addresses a lot of FN-49’s main issues.

With a raw stat increase, enhanced Skill 1, a new Skill 2 “Frigid Resolve”, and useful special equipment, FN-49 Mod goes from the poor DPS of her base self to DPS comparable to the likes of Lee-Enfield. She still has the issue of her Accuracy, which didn’t see a significant improvement. She will still struggle to hit more evasive enemies, particularly at night.

The main downside to FN-49 Mod is not an issue with her raw performance but simply with her cost. She is cheap by Mod standards since she starts as a 2★, but this is still a significant amount of memory fragments and cores to complete the mod, not to mention the resources needed to level her Skill 2 and enhance her special equipment, which is all but mandatory to squeeze out the last bit of performance from her. (Did we mention the oath ring that would be a really good idea for players that don’t mind spending money? That’s another extra cost which isn’t as much of a problem with non-Mod units.)

Commanders will need to decide for themselves if what FN-49 Mod offers is worth the asking price. She is an undeniably great generalist RF once everything is upgraded, but the question is whether or not you actually need another generalist RF like her, given the many strong options available for cheaper.

(...Or maybe that’s not important and you just need her blessed smile, which is totally valid.)

FN-49 has a fairly standard Damage Focus skill found on RFs such as M14, G28, and Lee-Enfield. Though due to being a 2★, her version is the weakest variant of this skill.

FN-49’s biggest issue is her low stats across the board. She possesses 111 Damage and 32 Rate of Fire, which is low by typical RF standards and gives her poor DPS compared to higher rarity options.

Another detriment is her 61 Accuracy. This is also low by RF standards and results in her missing more often than a typical RF, further hurting her potential DPS. This will prove to be particularly harmful against evasive enemies at night, which are only becoming more common moving forward.

To be comparable with the likes of Lee-Enfield is no small feat. Despite the cost taken to get there, once she gets to that point, FN-49 Mod performs very well. All aspects of her upgrade aim to enhance her Damage and Rate of Fire with great results.

She gets a solid stat boost, taking her base to 120 Damage and 34 Rate of Fire. Her Damage Focus skill also gets a boost to a 65% Damage increase. Her new skill, Frigid Resolve, gives her a small but effective 15% Rate of Fire increase while Damage Focus is active.

Finally, her special equipment has the same crit rate bonus as a normal VFL scope, but also packs a strong 5 Rate of Fire boost, taking her to 39 Rate of Fire with it equipped. This means FN-49 can fire at a noticeably higher RoF than other Damage Focus RFs, and against enemies where her lower damage per shot doesn’t result in enemies requiring more hits to kill, this additional RoF can significantly improve waveclear.

FN-49 Mod’s only remaining weak link in terms of performance is her Accuracy. It only sees a small boost from 61 to 64. This still means she is very much on the lower end of Accuracy for RFs.

Evasive enemies will prove to be a big problem for FN-49 Mod at night, where even some armored foes will be carrying small amounts of evasion that is enough to start becoming a problem for RFs. As a general rule of thumb with RF echelons that don’t have sure-hit DPS units like M200, it is recommended to avoid engaging highly evasive enemies like scouts altogether, and exercise caution against moderately evasive foes.

This is something that not everyone will consider a true ‘weakness’, but given how important managing resources is in Girls Frontline, it is a more than fair criticism of FN-49 Mod.

In order to reach the outlined potential, she needs to be maxed. This means reaching Mod 3, getting her second Skill to level 10, and enhancing her special equipment to level 10. Naturally, this will require a large investment of memory fragments, cores, skill data, and equipment fodder or universal parts. Not to mention an Oath ring too if you want the stat boost from 190 Affection. All of this for a doll who’s only comparable in performance to Lee-Enfield.

FN-49 Mod has great performance, but with a plentiful supply of strong generalist RFs who are cheaper, it can be difficult to justify raising her over those alternative options. It’s not that she’s a bad investment, it’s that the investment may simply not be justifiable for what you get.

As a generalist RF, FN-49 would appreciate any offensive buffs to her Damage and Rate of Fire. As she can already boost her own Damage with her skill, Rate of Fire buffers in particular would be highly helpful.

If you’re using Px4 Storm in Position 8, then FN-49’s position will rarely matter. Though placing the better RF in Position 7 leaves them protected from melee units which in turn makes them safer, so FN-49 should still be relegated to Position 1.

FN-49 Mod sees no notable change in playstyle from her base form. As such, what HGs she works best with hasn’t changed either. She will still appreciate any offensive buffs given to her.

She works very well when paired with two Rate of Fire buffers such as M950A and Five-seveN in particular. This puts her close to the 116 Rate of Fire cap, which she can actually reach with a little bit of further Rate of Fire support from the third HG or a Fairy.

It is also worth noting that, when alongside two Rate of Fire buffers, one should make sure that the other RF does not start to corpse whip. M14 is a prime example of this and should therefore not be used with FN-49 Mod.

Lo and behold, commanders everywhere can rejoice because FN-49 Mod has performance that can actually justify her being used in Position 7!

She will see her best performance in Position 7 because it will allow her to be buffed by the HG in Position 8. If one is using Px4 Storm in Position 8 however, then Position 1 and Position 7 are virtually identical, besides the fact that melee units can approach and attack Position 1.