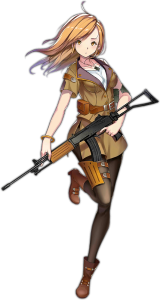 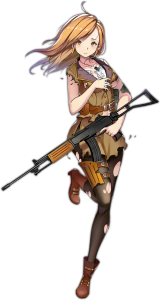 Galil, a famous gun for whoever had played Call of Duty: Black Ops, is unfortunately a very lackluster AR in Girls’ Frontline. Sporting an Accuracy self buff, average stats, the only upside Galil had for new Commanders was her cheap cost to raise, as acquiring dupes of her is an easy task. With the advent of Career Rewards, Galil simply became obsolete in the face of pre-levelled AR team. As the game heavily favours RoF and FP self buffs over Accuracy, Galil simply lacks anything to make a case for her. Such a shame.

A potato to gyaru-err, zero to hero on the visual department, Galil Mod unfortunately arrived too late for EN to fully utilise her. Her specialty is buffing flat Accuracy for her AR teammates sitting on her tiles, which means that she can essentially offset the night penality, thus enabling her AR partners to use VFL at night. Unfortunately, night missions are a niche content, even more for ARSMG teams due to the large presence of armored units in it. Moreover, she also competes with ValMod as a mod specialized in night missions, although she is significantly cheaper. As new Commanders have M4 SOPMOD II and ST AR-15, who, due to having two equipment slots, can still equip VFLs at night, there’s little reason for them to mod Galil early on, while veteran Commanders are likely to already have ValMod, a unit vastly superior to Galil Mod in night performance. Ultimately, Galil Mod is stuck between a rock and a hard place, and fails to be relevant for both new and Veterans Commanders. Too bad, her visual upgrade was really nice.

As Galil Mod’s kit means she’ll be equipping a PEQ at night, she strongly benefits from her SPEQ since it directly increases her base Accuracy, while it provides the same amount of Damage as the AR chip. Since her focus is on being a support AR, it's more advantageous to use her SPEQ so the other ARs receive more Accuracy than slightly increase her DPS with the RoF buff the AR chip provides.

Galil, as a 2 star AR, is easily acquirable on maps drops, making her a cheap choice for new Commanders.

With the advent of Career Rewards, it became hard justifying using Galil over the AR Team members. With Cores and CRs from Career Rewards, leveling up them became an easy task for new Commanders.

Accuracy self buffing simply lacks the punch Rate of Fire and Damage self buffing offer during combat. With easy access to ST AR-15, M4 SOPMOD II and M4A1 and the means to raise them, there’s little reason for Commanders to opt to raise Galil instead.

With an uptime of 15/16, Galil Mod essentially is able to offset the night penalty for her AR teammates due to her Skill 2, which allows her to share flat Accuracy

Galil went from a potato face to a cute gyaru. Not many Mods have such art quality increase.

While Galil Mod’s kit allows her AR teammates to equip VFL at nights, new Commanders already has access to two units that can do this: AR-15 and SOPMOD II. And so they don’t benefit from Galil Mod’s kit as other typical ARs do.

Not viable both for new and veteran Commanders

As Galil is no longer viable as an early game unit, this means new Commanders would have to go out of their way to level and Mod her for a second ARSMG, as their first ARSMG will be composed of M4, SOPMOD II and AR-15, with the last two not benefiting from Galil Mod’s kit as they can equip PEQ + VFL. Meanwhile veteran Commanders are likely to already have levelled night specialists like Groza and ValMod, which have better night performance than Galil Mod with typical generalist ARs.

Accuracy is not a status ARs often need, as they have decent Accuracy to handle daytime enemies, while at night, due to night penality, their Accuracy would barely increase without a PEQ, while her kit is geared toward letting ARs equip VFLs instead of PEQs at night. Meanwhile her Evasion buff is not appreciated by her AR partners while at the same time it’s too small to significantly impact the maintank’s Evasion.

Galil can be fit in either position 1 or Position 7 in a standard “F” formation ARSMG. As her self buff barely increases her DPS, it’s best to leave her receiving the offtank’s Tile buffs.

As Galil Mod’s kit turns her into a Support AR, she wants Position 4 this time. Due to her night specialization, it also means she’ll want a HG on her team, either in Position 2 or Position 8. P22 is particularly a good option, due to Accuracy tiles that will increase the Accuracy Galil gives to her AR friends, while an overall strong HG. Unfortunately, her kit doesn’t synergize well with AR-15 and SOPMOD II, so avoid pairing Galil with them.

The Galil is a 5.56x45mm gas-operated automatic rifle designed and produced by Israeli arms manufacturer IMI from 1975 up until 2001. Its design is derived from the Kalashnikov platform of rifles, with some modifications inspired by the Finnish Valmet rifles, the highest quality AK rifles from the 70s.

During the Six-Day War, Israeli troops armed with FAL encountered numerous reliability problems in the desert conditions of the Middle East. In comparison, the AKM continued to operate reliably despite exposure to said elements and lack of proper maintenance. Due to this, the Israelis started a series of rifle tests, where they compared captured AKM's with the  M16 and Stoner 63 rifles. The results from these tests showed that the AK rifle was superior in performance to its American counterparts, especially in extreme conditions.

As Israel wasn't interested in adopting the Soviet 7.62x39 cartridge they focused on chambering the NATO standard 5.56mm round on their new project, which lead to a second set of trials involving the M16, the Stoner 63, the Armalite AR-18, the HK33, and also weapons from Steyr and Beretta.

Galil emerges from a peculiarity in the trials: two miscellaneous designs were submitted, one from Uziel Gal (the designer of the Uzi Submachine gun) and another from Yisrael Galil (formerly Yisrael Balashnikov). Galil had been asked to develop the AK into a 5.56mm rifle for the Israeli Defense Force, and he had succeeded in his assignment.

At the end of the trials, Galil had the best performance and was adopted by the Israeli army. It saw service until 2001 when it was replaced by the TAR-21 bullpup rifle.