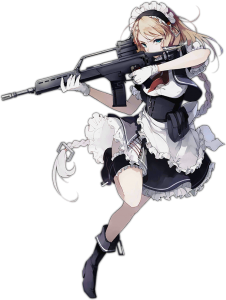 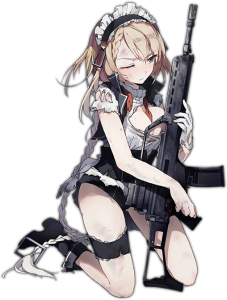 G36 is considered one of the premium 4 star ARs and the “budget” G41 due to her strong base stats, formation buff, and self Damage buff skill. The difficulty many players have obtaining her is befitting of her power level, as she can fit into just about any AR-based Echelon and put on an above-average performance. G36 does not fill any specific niche role, however, and therefore is sometimes outclassed by other T-Dolls in specific situations. Regardless, players should always consider G36 for leveling if they need a strong all-around damage dealer.

Griffin’s best maid, G36, has emerged from her neural upgrade angrier than before, and with combat performance to match. Receiving substantial boosts to all of her stats, particularly the all important Damage and Rate of Fire, G36 Mod improves upon her unupgraded self substantially, firing one frame faster in many situations and dishing out dealing more damage thanks to her much-improved Damage Focus Skill. G36 Mod’s secondary skill, Arclight Contract, allows her to shine further, as the skill not only excels at providing further team support, but also significantly improves her own DPS in the process.

G36 Mod makes a compelling case for her inclusion into any AR/SMG echelon. She competes handily with top tier DPS ARs, and offers impressive team support by buffing Damage, Rate of Fire, and Evasion for both Tanks. As a versatile flex pick for any AR echelon, commanders who can afford her Neural Upgrade would be hard pressed to pass over G36 Mod.

Damaged
Watcher of the Light

G36 has relatively average stat caps across the board. Her Damage Focus T skill, though, significantly increases her single-target damage output compared to most other ARs.

In addition to her strong base stats, G36 also has a formation buff that is very suitable for standard F or b formations.

Her well-rounded stats and powerful skill make her a very versatile AR choice, but G36 has no overwhelming advantage in any specific situation when compared to Night Battle specialists like 9A-91 or AOE powerhouses like M4 SOPMOD II.

G36 has very average stats as a whole, with all of her stat caps being somewhere ±10% from the AR class averages. Her strength comes from her Damage Focus T skill, which at maximum rank increases her own damage by 70.0% for ten seconds. The skill’s initial cooldown is also a mere four seconds, which means that it activates and lasts for the duration of most battles. This puts G36’s average damage output in short battles above that of most other ARs, although the damage balance evens out somewhat in more extended fights.

G36’s formation buff is also quite powerful, providing a 10% ROF increase and a 30% Damage increase to SMGs directly in front and diagonally in front and below her. This is a very powerful buff if G36 is positioned in the top left corner of a F formation or the center left position of a b formation, as it provides both frontline SMGs with a very relevant buff to their DPS.

Overall, G36 is a powerful flex choice to fill the last slot in any AR-based Echelon, as she has good damage and a strong formation buff for the SMGs slotted in front of her. Although she is outclassed in AOE damage by grenade skill ARs and in single-target focus by ROF skill ARs, G36 still performs very well when compared to many of her contemporaries and should generally be considered a priority if an AR slot in an Echelon needs to be filled.

G36’s Damage Focus Skill was already potent, and after neural upgrade, it becomes moreso. Combined with her MOD II Skill, Arclight Contract, which further buffs G36 Mod’s Rate of Fire, she becomes one of the best DPS ARs available to the player.

Arclight Contract also provides team support in the form of a 25% Evasion buff to any T-Dolls on her tiles, which are conveniently positioned to cover the whole frontline if G36 is positioned in tile 7.

Much Improved Base Stats

G36 Mod’s base stats are universally improved, with the most notable buffs in Damage and Rate of Fire, playing a crucial part in improving G36 Mod’s DPS.

G36’s special equipment is the G36 Hybrid Optics, a scope that provides 48% Crit Rate and 8 Accuracy. While this only provides a small boost to DPS when compared to the standard VFL 6-24x56 Optical Sight, the high Accuracy does become helpful in later content, therefore upgrading it can be considered a luxury at present and deferred until the commander can afford its high enhancement cost.

G36 Mod benefits a great deal from her neural upgrade. Her relatively middling base Stats all receive sizable increases, with the most important being a boost of 4 to Damage, rising to 51, as well as Rate of Fire which rises to 76 , which lets her fire one frame faster by default as well as when boosted by common RoF buff values. A small caveat to this is that G36 Mod does not receive this final point of RoF until level 120, requiring a significant investment of time or resources to reap the full benefit.

G36 Mod’s much-improved Skill and new secondary Skill is where she truly shines. The upgraded Damage Focus provides G36 with a 75% buff to her Damage, a 5% improvement over her unupgraded Skill. This alone is a significant increase to her DPS, making G36 Mod competitive with G41. However, her secondary Skill, Arclight Contract, is what makes G36 Mod stand out from the crowd.

The first part of this Skill provides G36 a 10% buff to RoF per T-Doll on her tiles, resulting in an impressive 21% RoF boost when two are present, something that happens by default with both the main tank and offtank SMGs being situated directly on G36’s buff tiles.

Furthermore, any Dolls on her tiles are given a 25% Evasion buff for 5 seconds. Any type of Doll suffices for this Skill, not just SMGs, should G36 be in an Echelon with one or more HGs. By itself, Arclight Contract ups G36’s RoF from 76 to 91, which is a substantial improvement in DPS that also makes hitting the hard cap of 116 much easier should commanders wish to do so. Her additional buff to the T-Dolls on her tiles should not be ignored either, as it means that G36 can provide an almost full suite of buffs to both Tanks from position 4, opening up team options when building with DPS Offtanks while also helping to enhance the survivability of every frontline T-Doll.

In terms of Buff Tiles, the neural upgrade does not provide much to G36 Mod, only an up to 15% bump to the RoF portion. With that said, for Damage focused Offtanks such as Vector, G36’s tiles remain just as useful due to the incredible 30% Damage boost. Her secondary Skill somewhat compensates for her lack of a defensive buff, although it does have an initial cooldown unlike tile buffs.

All told, this neural upgrade provides exactly what G36 needed to stand out from the crowded pack of self buffing ARs. With improved DPS, newfound team utility, and solid boosts to her base stats, G36 Mod is a compelling choice for AR echelons, more than rewarding the investment made in her. While this does come with the footnote of needing to level her to 120 before she reaches her full potential, leaving G36 at MOD II is perfectly acceptable as the bulk of her improved effectiveness has been unlocked at that point, at only slightly over a third of the total MOD III cost.

Since G36 already buffs her own damage with her skill, she benefits most from SMGs that can increase her ROF or crit rate such as UMP45, Vector, and Skorpion

The standard F formation allows G36 to easily buff both SMGs in a 2SMG 3AR Echelon.

The b (reverse F) formation works as well. Ideally, both SMGs also buff G36 when they are positioned as shown above.

G36 Mod’s Tiles and skill make her fit perfectly in position 7, as in other positions she would not provide the 30% Damage tile buff to any off-tank SMG. Backline options involve the standard 2AR 1HG or 3AR depending on echelon need, and the frontline SMG options are flexible, although commanders should ensure that both SMG are on G36’s tiles when her Skill activates to receive maximum benefits.

Since its debut in 1997, the G36 has made a name for itself in many European militaries and police forces for its versatility, ease of maintenance, and straightforward design. As the successor and replacement for the G3 rifle in the German military, the G36 was designed with almost every part being multiconfigurational, allowing for unparalleled customization and flexibility. To this day, the G36 and its many variants continue to see widespread use by militaries and civilian consumers alike and have become highly popularized in modern movies and video games.