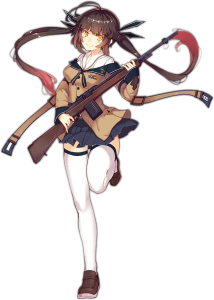 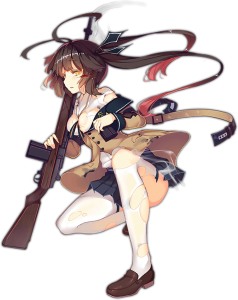 M14 is a strong all-purpose RF who should not be overlooked due to her 3 star rarity.  Despite her low base damage, M14’s DPS potential is greater than that of most other low-rarity RFs due to her high ROF cap and Damage Focus skill. Players who need a low budget and flexible RF should look to M14 first to fill an RF spot in their Echelons.

M14 lives up to her affectionate moniker of War Goddess after her Mod, adding to her excellent base RoF, gaining base Damage, and a pure DPS boost in her secondary Skill. Given her already fantastic combat ability, M14’s neural upgrade could only improve it further, and she does not disappoint.

After the neural upgrade, M14 approaches Lee-Enfield in raw DPS, leaving G28 in the dust. M14 Mod’s weak point remains her base Damage, even after the increase from MOD III. While M14 may occasionally take one extra shot to kill enemies compared to Lee-Enfield due to her lower Damage, M14 Mod’s excellent Rate of Fire keeps her DPS fantastic and she will definitely perform well for Commanders who can afford her neural upgrade.

M14 has exceptional base ROF, which combines nicely with the Damage buff provided by her Skill.

M14’s base Damage is rather low, so her total Damage output is somewhat lower than that of other RFs in shorter battles where her Skill does not activate.

M14 has a rather odd set of stats, with low Damage and Evasion but the highest base ROF among RFs at 43 -- more than 20% higher than the RF class average. This does not, however, mean that M14 is weak, but rather the opposite; M14’s excellent ROF synergizes well with the Damage buffs provided by both her Skill and the Formation buffs of many HGs.

M14’s low base Damage is more than made up for in her Skill, Damage Focus, which at max level increases her damage by 60% for 5 seconds after a 5 second Initial Cooldown. This skill provides M14 with some serious DPS potential and makes her a strong all-around threat against most enemies.

Overall, M14 is a great RF choice for players who are trying to budget Cores or just need a solid RF to fill out a team. Although she is slightly less consistent than ROF-based RFs such as WA2000 or SVD due to her odd stat distribution, her skill makes her a high DPS unit that fits well into most night Echelons.

Damage and Critical Damage Self Buff

Exceptional Base Rate of Fire

While only receiving a slight bump to a base of 44, M14 Mod remains at the head of the pack amongst RFs for RoF.

M14’s base Damage after upgrade is only 111, which does little to amend her place at the lower end of RFs.

While the M2 Bipod does technically help improve M14’s DPS by patching up her relatively lower Accuracy compared to other RFs, the overall gain is minor when compared to the amount of investment required.

M14 Mod pulls no punches, adding another point to her already high Rate of Fire, now 44, and backing that up with a base Damage of 111. While 111 Damage is by no means impressive compared to other RFs, M14’s self boost to Damage and new secondary Skill more than compensates for this shortcoming. The extra point of RoF is likewise not a large increase, although in certain team compositions it will allow M14 to shoot one frame faster.

Alongside her rise in rarity to 4★, M14 Mod’s Damage Focus Skill gains a small multiplier bump, now providing her a 65% boost to Damage. Her secondary Skill attained at MOD II, Clear Fighting Spirit, activates alongside Damage Focus, increasing M14 Mod’s Critical Damage by 10%. Thanks to the traditionally high Critical Rate of RFs, M14 Mod gains 8-10% DPS during her Skill. M14 Mod is competitive with Lee Enfield and the yet unreleased FN-49 Mod in DPS, although her substantially higher base Rate of Fire is a notable advantage.

M14 Mod’s Special Equipment is the M2 Bipod, an accessory that provides 48% Crit Rate like a standard VFL and a small amount of additional Accuracy. Given the investment required to max-enhance Special Equipment, the marginal increase in DPS the Bipod provides over the standard VFL is not worthwhile, but commanders who truly wish to squeeze every last drop of performance out of M14 Mod may wish to do so as there will be certain future content where the additional Accuracy comes in handy.

While other Mod upgrades come with gimmicks or new additions to an existing skillset, M14 Mod forgoes those things in favor of raw statistical boosts, and she is positioned to leverage them fantastically. While the investment of a neural upgrade is considerable, M14 Mod reaps the benefits, and delivers fantastic performance for Commanders who choose to invest in her, able to fit into RF echelons with ease.

M14 benefits heavily from pairing with HGs such as Five-Seven, M950A, and Stechkin that can boost her ROF to supplement the damage increase from Damage Focus.

M14 fits well into standard HG/RF formations, ideally in the top row of an F configuration where she and the HG in front of her can mutually buff each other.

While M14 can function alongside any self buffing RF, pairing her with Damage Buffing teammates makes for an easier time synergizing buffs from the HGs. Lee Enfield and G28 are both easy choices for this role, as they both sport excellent DPS, and synergize with M14 Mod. When released, FN-49 Mod emerges as an option, albeit an expensive one.

RoF buffing RFs such as WA2000, K31, or SVD can be used in a hybrid formation. Against more varied enemy compositions, hybrid formations can be more effective than specialized ones, as they avoid wasting DPS due to synchronized Rate of Fire, and M14 Mod’s exceptional Damage allows for her to one hit kill enemies that WA2000 or SVD are unable to, allowing for the team to handle a wider variety of foes.

Buffs to M14 Mod’s Rate of Fire synergize with her existing kit, patching up the usual RF weakness of low RoF. M950A and Stechkin fill this role well, while debuffers like Welrod MkII can provide tile buffs that push M14 to RoF cap in certain team compositions.  Meanwhile, Damage buffing HGs are always useful to boost M14’s DPS, where SAA, Grizzly, K5, and Contender (for bossing) are all possible options.

A special mention should be given to this combination. Five-seveN’s Rate of Fire buff offers a substantial DPS bump, and pushes M14 Mod’s Critical Rate over 100%, allowing for her to make maximum use of her secondary Skill. Meanwhile, Px4 Storm’s Skill in conjunction with Five-seveN results in an effective Damage boost of up to 50%, far greater than what any other single HG currently offers. For more information, Px4 Storm’s character page contains a full analysis on this specialized team composition.

M14 Mod can fit in either position 1 or 7 of a standard F formation. Preference should be given to position 7 to maximize M14’s DPS, although her performance will remain above average no matter where she is placed. If used with Px4 Storm, M14’s positioning will not matter, as Px4 Storm’s buffs apply to the entire backline.

After replacing the M1 Garand as the standard military service rifle in the United States in 1959, the M14 became one of the most successful battle rifles ever created, favored for its accuracy and consistency. The M14’s design is also the basis for more recent sniper rifles such as the M21, M24, and Mk14 EBR, all of which continue to see use in the present-day. Although it has mostly been retired from mainstream service as a standard infantry rifle, several militaries still use the M14 and its variants as snipers, reserve weapons, or ceremonial weapons.