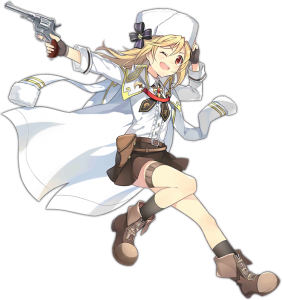 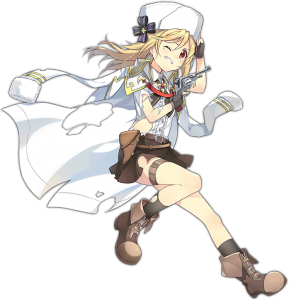 Babushka can be compared to the veteran you meet at your work, your university, or in the army: she teaches you a lot, helps you at the beginning, but eventually, you have to stop relying on her. Packing one of the strongest tiles among us the HG class, M1895 Nagant Revolver, or simply Nagant, is a strong HG accessible from day 1 due to being droppable from virtually all GFL maps, as well as easily obtainable while crafting HGs. By having strong tiles Nagant remains relevant until Commanders can consistently level up dolls and afford to raise higher rarity HGs, and even then, she can be fielded in a secondary RFHG team.
Unfortunately, as Commanders progress toward more recent content, she tends to be phased out due to being a night debuffer HG; recent content tends to favour buffer HGs because of increasing enemy HP and the presence of slow, dangerous enemies.

Babushka came back, and this time better than ever, to kick M9’s ass. Packing likely the best HG tile buffs in the game, as well as a 0 seconds ICD makes Nagant Mod a strong contender for best HG for early Damage buffing. The uniqueness of her Skill 2 also lets her compete in a niche previously reigned by Python, albeit not as effectively, or act as a good team member, triggering Python’s Skill even more often. That means she’s especially good when paired with M500 Mod, AS Val Mod, or any other doll with a passive that is triggered by Damage buffing. Meanwhile, her Skill 1 carves herself a niche in helping SGs tank enemies whose Damage stats surpases their Armor that, while not often seen, has its uses nonetheless. Her Mod III offers a Suppressor superior to the standard 5* one and a great improvement to her original art. However, Suppressors are only marginally beneficial to HGs, and her idol skin is superior to her Mod III art, so unless she’s a very precious granny or mentor, Commanders can stop at Mod II.

Despite being a 2 star, Nagant has tiles that rival even the best 5 star HGs, namely Grizzly and SAA Mod.

Being available from day 1 means Commanders greatly benefit from her tiles when they lack the resources to Skill level dolls and can also benefit from her Skill when, even at low levels, it can make a difference.

By being a 2 star that drops from virtually any map she is a cheap option to raise early on when Commanders don’t have a stable source of cores.

Having 92 evasion means that Nagant can dodge a few stray shots decently. Coupled with her Damage debuff skill, she can greatly extend the team’s survivability in early chapters, as the enemies don’t have high Accuracy or Damage stats.

Older Commanders were able to acquire her idol skin on bingo, with new Commanders having to resort to the Anni crates or Black Cards to acquire it. Regardless, it increases her cuteness by 300%. Remember: cute > horni.

Nagant has two main downsides: she’s a debuffer, and has a night skill. WIth the overabundance of day maps, as well as the increasing need of buffing HGs to meet DPS checks, Nagant tends to be phased out hard.

As Commanders progress toward recent content, debuffer HGs tend to be phased out in favour of buffer HGs due to scaling enemy HP and the increase in enemies that either bypass debuffs or that are deadly to dolls if they’re allowed to shoot, like Hydras.

Neither too high nor too low, Nagant is right at the middle in the HG class HP wise.

Nagant Mod has a lot of qualities a Mod doll can wish: cheap to raise (as she has viability pre-mod), cheap to mod (as she is a 2 to 4 star mod), tiles and Skills that make her worth using, and, lastly, her peak performance arrives at only Mod II.

While it is not explicitly said, her Skill 2 actually activates with her opening shot. That means she provides a 10% Damage buff at the start of the battle. While the buff is not big, it nonetheless means a buff in early damage only a selected few HGs can provide.

Nagant Mod’s tiles pack 35% Damage and 20% Crit Rate, and likely are the best tiles a HG can offer.

Nagant Mod, due to her Skill 2, can act either as a partner or as a replacement of sorts for Python. As Python is mostly used for her ability to trigger her passive Skill multiple times, Nagant Mod can either help trigger it more often, or act as a budget replacement until Commanders can farm Python in Continuum Turbulence Campaign.

Nagant Mod has another niche for herself: extending a Shotgun’s survivability. Her Skill 1 can be used in two ways:

While she is best used in night battles, as she was extensively, along with TEC-9 (who has the same Skill 1 as her), in Isomer and Shattered Connexion, she can perform adequately in daytime (though not as well as VP70, for example) when paired with Armor self-buffing Shotguns, such as KSG and LTLX, as her Skill 1 only lasts 5 seconds during daytime, instead of 8 seconds during nighttime.

There are two particular examples worth highlighting of when she was used in the RFHG-SG niche:

Her Mod III’s skin is a major upgrade to her original art, and makes her as cute as she is old. Take care of granny.

She’s still a Position 4 buffer at heart, which means she faces competition from 5-7, SAA Mod, Stechkin Mod, among us other HGs. Newer HGs, like HS2000, Deagle, C93, HP-35, also favour unconventional formations, with an RF on Position 4. That makes traditional Position 4 HGs less favourable in place of dolls that can buff both RFs.

She still has a nighttime Skill 1 that applies debuffs on enemies. While there are certain scenarios that can warrant it, it’s still subpar on most battles. If she’s heavily needed for that, there are better options.

As she is obtained early on, Commanders will likely pair her with RFs they acquire from Career Quests, such as M14 and Springfield. However, by having Damage tiles, she is best paired with either RoF RFs, such as WA2000 or SVD, or with RFs with low Damage, like M14. She is best positioned on Position 4, though she can also be fielded on position 8, as HGs that occupy either position 8 or 2 and tile buff the entire back row are not obtainable until later.

Because of her strong tiles and night debuff skill, she can also be fielded, in either position 4 or position 8, in ARSMG teams for early Night missions.

Nagant Mod can fit a variety of team comps, typically at Position 4. She can be used as a budget replacement for Python on Val Mod and M500 Mod teams, used as a partner to Python, for big Python buff memes, as a typical Position 4 HG that buffs teammates and debuffs enemies, or, more specifically, due to her Skill 1 and good tiles, she can be often paired with KSVK Mod, to trigger her passive. She’s best paired with RoF RFs, since her Skill 2 is a Damage buff, and her tiles are Damage and Crit Rate.

The M1895 Nagant revolver was designed by a man that we have heard of before, the Belgian Léon Nagant. He was already an acquaintance of the Russian Tsar because of his role in designing the garbage rod Mosin-Nagant. In 1895, it was adopted as the standard issue sidearm for the Imperial Russian Army and law enforcement, where it replaced the older Smith & Wesson Model 3.

There were 2 versions made, a double-action for officers and other important people, and a single-action (cheaper) for everyone else (double action just means the hammer gets cocked when pulling the trigger, removing the need to pull it back after every shot). After 1918, the cheaper variant got abandoned and everyone got the nicer model.

First produced in Belgium, production switched to the iconic Tula plant in 1898. In 1933, it started being replaced by the TT-33 Tokarev, but this would only be completed in 1952 when the Makarov got adopted. After this, it still saw use in the Russian Railways, remote police forces, and... the postal service? They used it until...2003. ONLY IN RUSSIA COMRADE.

The most notable aspects of the Nagant revolver is the gas seal system and the ammo it fires. Normal revolvers always have a gap between the cylinder and the barrel, which vents hot gasses and can hurt accuracy if they are misaligned (either through poor design, bad maintenance, or severely worn out parts).

But you see, Nagant wasn't a fan of this. So he designed the revolver to, when cocking the hammer, move forward the cylinder after rotating it, closing that gap. The round it fires also plays a role - the brass casing is extended and the projectile is entirely contained within. When the cylinder moves forward, the casing (slightly narrower at the front to match a slightly conical section at the start of the barrel) also acts as a seal, making this a very efficient design. This also means that the Nagant revolver can be easily suppressed, since it can actually seal the chamber, unlike... every other revolver out there. Unfortunately, the trigger pull is quite heavy, although this can be alleviated with redneck engineering adjusting the strength of a spring by making it thinner. This isn't a side effect of the cylinder moving mechanism as that happens when the hammer is cocked, but most likely a safety measure that ensures the trigger won't get pulled easily if it gets caught on a string or piece of clothing.

Despite the added complexity, the M1895 is ridiculously reliable and sturdy, which is remarkable if we consider that this was something that either didn't succeed or wasn't tried at all previously.

The suppressor mod was an official modification as well that started in 1931, used for recon and scout troops. There was a swing-out cylinder version, but that never went into service and civilian sales just didn't happen very much.

Oh yeah, that's another thing. This gun sucks to reload. You have to eject every cartridge one by one, and reload it also one by one. Meanwhile. the British had their Enfield/Webley break-action revolvers which, when opened, would throw out every round at once. The Americans had the S&W Model 10 which had a swing-out cylinder with a similar extractor to the british revolvers, but had to be manually pushed.

This isn't to mention Browning's masterpiece, the 1911. Or the Mauser C96, or the Luger P08, or [insert handgun here that doesn't suck to reload]. After you shot your load- ahem, 7 rounds in the cylinder and the target(s) isn't dead or disabled, you're screwed.