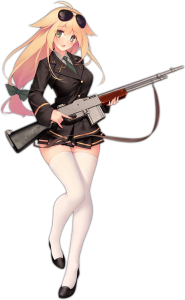 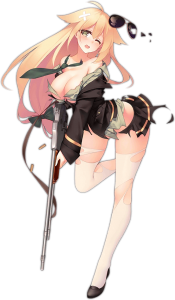 Whether it be through career quests or her login event, M1918 (otherwise simply called BAR) will likely be one of the first MGs any commander receives. She is a 4★ MG whose base form isn’t anything special but nothing terrible either.

Statistically, her FP and Accuracy are high. She’ll hit hard and fairly reliably without the need for too much external accuracy support. The main downside is her poor clip size, which is helped somewhat by her Special Equipment but she still remains below other popular MGs.

Her skill, Damage Focus MG, is a powerful FP boost, giving her a large DPS increase in the second volley. With the long initial cooldown and no passive though, her damage output in the first volley is lackluster compared to the likes of the “Big 4”. Her tiles are passable, giving a good armor boost but poor coverage.

As one can see, the base version of BAR possesses several upsides and several downsides. She’s a good pick for when you need MGs and have nothing else available, but will typically fade from use once a commander acquires stronger MGs

Damaged
War Is Over

M1918 comes with 96 FP and 31 Accuracy, both being on the higher end for MGs. Her high damage fits well with her damage boosting skill while her accuracy allows her to favor other types of bonuses over accuracy.

M1918’s tile gives a 10% armor boost. While this is on the lower end for armor boosts, it’s nevertheless a beneficial bonus for any SG to receive

M1918 possesses a pitifully low clip size of 8. At the time of writing, this is the lowest possible clip size for an MG. This serves as a large detriment to her potential DPS, especially compared to other top MGs which possess clip sizes of 10 or 11. Her Special Equipment helps with this issue somewhat.

While Damage Focus MG is a great boost for the second volley, the lack of any boost for the first volley results in M1918’s damage output falling behind other major MG competitors within that first voley. As such, M1918 is better suited for longer fights where she will reach her second volley.

M1918 will only boost the SG on the tile of the front row directly in front of her. In a standard MGSG with one SG, this relegates her to Position 4 if the commander wants her to boost the SG, which in turn means that slot can’t be used for a HG buffer if desired

M1918 Mod’s new Skill 2 goes a long way in improving her overall DPS. Battlefield Magic sets her reload time to a fixed 5 seconds, and also boosts the damage of her first three shots in each volley by 40%. The most substantial part of this is the extra damage on the first three slots which results in an overall large DPS boost for all of M1918’s volleys. The fixed reload time is a nice bonus as well, helping her to get into subsequent volleys quicker.

M1918 Mod enjoys a substantial 5 FP and 3 Accuracy from her upgrade, bringing her up to 101 FP and 34 Accuracy. Her offensive stats were already high in her base form, so now they’re even higher and do contribute greatly to her DPS.

In order to reach her best potential, M1918 is arguably one of the most expensive mods (besides the 5★ Mods). She wants to ideally be brought all the way up to Mod3 so she can enjoy the extra stats from being oathed. On top of this, she wants not her Mod Speq but her other Speq: the Titan Fire-Control Chip. So she needs the typical resources that a 4★ needs to be upgraded, an oath ring for the extra stats from affection, her other Speq which needs to be farmed, and then that Speq needs to be fully upgraded. All in all, this will total to a large number of memory fragments, cores, data, and other resources.

Considering that other strong MGs have comparable performance to M1918 Mod whilst costing much less to reach their peak, it can be difficult to justify this upgrade.

Her upgrade sadly does not fix M1918’s poor tiles. She still only buffs one SG that’s directly in front of her, again forcing her into Position 4 which in turn means that position can’t be used for a HG buffer if desired.

There is a good selection of Position 5 HGs for a typical SGMG, including but not limited to Mk23, K5, and Contender. All of these provide strong bonuses, but Contender in particular deserves special mention for her crit rate buff, which can improve M1918 considerably when she’s equipped with a VFL.

M1918 is sadly incompatible with KSG; She cannot buff her armor while also receiving buffs from her in return. Nevertheless, S.A.T.8 and Saiga-12 are both strong SGs who can buff M1918 while receiving her buff themselves. Given Saiga-12’s preference towards offense, S.A.T.8 would appreciate M1918’s buffs more.

M1918 wants to take Position 4 in order to buff the SG. If you are not concerned about her buffing the SG or would rather take a HG buffer in Position 4, then she can go in any other MG position.

The dolls that M1918 likes to be paired with have not changed between her base form and her Digimind Upgrade. She still appreciates a strong position 5 HG buffer such as Mk23, K5, or Contender while still remaining best paired with an SG such as S.A.T.8 or Saiga-12 that can buff her while also receiving M1918’s armor buff.

The logic of where to put M1918 Mod also remains unchanged from her base form. She is best placed in Position 4 where she can buff the SG in a standard SGMG echelon. If one doesn’t mind her buff going to waste, M1918 can occupy any tile on the back column.

The M1918 BAR was the first model of the Browning Automatic Rifle series. It was first designed in 1917 by John Browning and entered production in that very year until 1945. The M1918 saw service until the early 1970s.