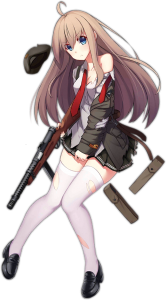 Beretta Model 38 is a 2* stun grenadier. Her survivability stats are rather skewed, with a really high HP pool for an SMG but one of the worst Evasion stats on an SMG in the game. This is really problematic considering her role as a main tank, taking the brunt of the damage. Her tiles give really relevant stats, but only in small batches due to her rarity.

As with all stun grenades, M38’s Skill will completely stop certain enemies in a large radius, making her fairly good at crowd control and tanking. However, here her 2-star rarity holds her back again, as her stun grenade can only stop the enemy for a maximum of 3.2 seconds.

So from both Skills and stats M38 struggles to perform her job well. Higher rarity counterparts like UMP9 or SMGs that come with more survivability like Sten MkII are decent replacements.

Seeing the failure of T64’s attempt at a mod, it seems M38 tried to go the other route and multiclassed into a DPS off-tank by simply throwing another grenade. Genius. Why didn’t we think of that before? Her HP has been inflated to even higher levels than before, and all around her stats have improved slightly. She also buffs RFs with her tiles now, which can be really handy.

Unfortunately, at this point, M38 suffers from a problem of role conflict. Her original skill 1 is a flashbang, making her a main tank. But her evasion is still awful, even after a mod. Her skill 2 is a Molotov with a bigger radius, but it lasts shorter, comes out later, and does less damage. On top of this, she’s almost guaranteed to be torching the enemies she has already stunned instead of potentially more urgent targets she has not. So while M38 can fill the shoes of both an off-tank and main-tank at once and give the off-tank spot more options, she does not do either job especially well. And of course, neither of these skills works well against a boss or specific high-priority targets.

It might be better to just split up your teams into the more standard options rather than run M38, or just think of her as a stun grenadier with a little damage on the side. Investment into her is a questionable choice seeing how strong counterparts like Micro Uzi Mod and UMP9 Mod can get. Although her mod SPEQ can make quite a difference in her damage output, taking her to mod 2 just for the flexibility should be enough for most.

Beretta Model 38’s tiles provide the very useful Rate of Fire and Damage stats, although held back by the fact that she’s a 2* and therefore not particularly significant buffs.

Both M38’s tiles and Skill duration, while useful, are very weak and held back by her low rarity.

Stun grenades do not have any effect against bosses and specific other enemies like Doppelsölders, which means M38 would be left with her rather unfortunate base survivability against those enemy types.

At a measly 52, M38 has one of the lowest Evasions for an SMG, crippling her survivability and balancing out her high HP pool.

At 1065, Beretta Model 38 Mod has an exceptionally high HP pool for SMGs.

M38 Mod’s tiles’ multipliers are still rather weak, but they are an improvement. A bonus is that she now also buffs RFs if ever an RFHG needed a main tank and an off-tank rolled into one. It’s a rare trait at least.

Stun grenades will stop affected enemies from moving or attacking, while M38Mod  torches them with her Molotov. This buys valuable time and can significantly damage or kill certain targets.

Now that her FP stat is actually relevant, M38 Mod’s FP stat is quite high, matching even the ridiculous PPS-43 at 33 FP. With her SPEQ that’s a better EOTech, M38 Mod 3 can hit a whopping 44 base FP. However, it should be noted that even with these ludicrously high base stats her Molotov underperforms compared to others simply due to multiplier.

Jack of All Trades-

Can take the role of an off-tank as well as a main tank due to her skill 2 being a Molotov, freeing up a slot for interesting applications. Since she does a grenade rather than buff her own stats, she has a slight advantage in that department over other similar main tanks since neither of her skills is link-dependent.

Model 38 Mod’s main tanking ability is wanting, and her Molotov deals far less damage than her actual Molotov counterparts, making her potentially insufficient for both roles.

5 seconds + throwing time is still quite long, and the fight dragging on that long could be bad. Since her Molotov is linked to her stun grenade, it comes out later too, perhaps too late to have an effect.

Stun grenades do not have any effect against bosses and specific other enemies like Doppelsölders. Those enemies tend to come at low links, making Molotovs rather weak against them as well.

Even after a mod, M38 Mod’s Evasion is lower than average for an SMG. It has improved to 60, but that is rather pitiful.

Since M38 Mod’s stun delays enemies for quite awhile, ARs whose skills kick in far later synergize with the stun.

With the SMG nader role potentially filled with the maintank, the offtank spot can be occupied by someone who does not rely on AOE to do cleanup.

In an ARSMG, HGs can be added for additional DPS or a bit of extra survivability for Model 38 Mod. In an RFHG they should already come with the team.

If running M38 Mod on an RFHG, RFs that rely less on a full set of buffs to perform or can buff SMGs are likely to do well with her.

A standard ARSMG will likely use M38 as the main tank, catching positions 1 and 7 with her decent buff tiles.

In an RFHG, M38 Mod might provide the needed survivability and crowd control the RFHG usually lacks if against certain problematic enemies.