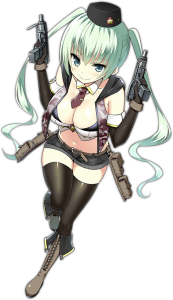 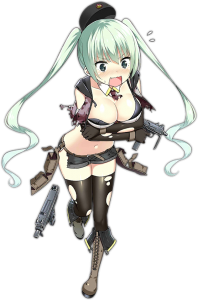 Micro Uzi, also known as Uzi, or Ugi, is a 3 star SMG awarded to Commanders upon completion of 3-4E, who is known for having utterly useless tiles that makes us wonder what was Mica thinking when they designed this (or if they were thinking at all), shares many similarities with Skorpion, who’s another 3 star Molotov SMG that new Commanders can acquire early on. Being either equal or inferior to Skorpion, on top of having bad tile layout, means that there is little reason to level up Ugi, at least until Commanders have sufficiently progressed to mod her.

A zero to hero mod, Ugi Mod goes from one of the worst Molotov SMGs in the game to one of the best, even being a better choice than Vivi (Vector) in some cases. With her tile position finally fixed, a buff in her Evasion, HP and Damage, on top of a skill that now lets enemies on fire set enemies on fire. Ugi Mod can be safely modded to Mod 2 for Commanders who don’t wish to dupe 416 Mod to drag 12-4E, or wish to have a wider variety of Molotov SMGs.

Commanders acquire her upon completing chapter 3-4E. That means every Commander can access her Mod later on, and use her as logistics leader until she can be replaced by higher level dolls.

Ugi is Ugi, and will always have a place in our hearts.

18% Damage buff for ARs is a very good buff, if only we could use them.

Skorpion has a tile position that actually allows Commanders to make use of it, on top of slightly more Evasion (83 Evasion versus Ugi’s 79) and is easy to acquire early on. New Commanders are likely to come across Skorpion before they acquire Ugi upon completing 3-4E. Skorpion, being either similar or superior to Ugi, means that there is little reason to level Ugi until Commanders can mod her.

Arguably the best thing about her mod, Uzi now can actually buff the AR behind her, on top of now buffing 15% Accuracy as well.

If Commanders can meet the requirements, Ugi Mod is the most consistent 12-4e dragger, more than 416 Mod.

For Ugi Mod to be a consistent 12-4e DPS dragger, she has rather hefty requirements, compared to 416 Mod: requires a maxed HP ammo, a Maxed EOT, and 50% Damage buffs from ARs tiles, HGs tiles, Fairy auras and/or Fairy Skills (such as Warrior’s Skill), though, unlike 416 Mod, she only needs her Skill 1 at SL10. For Skill 2, Commanders can safely stop at SL 4 or SL 6, depending on how much Data they have to spare. For Commanders with low rarity fairies (2 or 3 star fairies) this may end up restricting her farming comps as they’ll need to either field half levelled HGs, or field more HGs. This may be an issue if they need to raise T-Dolls from other classes.

SMG Molotovs, due to enemy HP scaling, are mostly niche nowadays so Ugi Mod, while cheap, is far from a priority.

If you are insistent upon using Uzi, ARs that boost the Damage of her grenade, OTs-12 in the early game or 416 later on, are good choices, although other cheap ARs such as FNC are more likely to be used to free up stronger units for other Echelons.

If you decide to put her in position 4, I will quote Soulmuse: I will find your house and do mean things to your waifu.
That said, forget her tiles exist, and just position her at the usual offtank position, Position 7. As she is a molotov for early game if the Commander somehow doesn’t have Skorpion, her partners will likely be FNC, OTs-12, M4 SOPMOD II.

As Uzi Mod finally buffs the AR behind her, she can be of more use to the team. She is traditionally placed at Position 7. As she is a Molotov, she can appreciate Damage buffs, such as those from Groza and 416 Mod, or Evasion buffs to increase her survivability, such as AR-15 Mod’s.

For 12-4E Uzi Mod can be fit on the back row, at positions 1 or 4, depending on what tiles she needs for the 50% Damage buffs, or beside the SG, as most ARs only buff tiles in front of them and there’s no risk of her getting shot at.

The Uzi was developed by Israel in the late 40s and early 50s. As a newly independent state with a lot of enemies, they understandably wanted to have domestic firearms in production. The gun had to be decently accurate, not too heavy, compact, and could be easily made by a state with no existing firearms industry. The Uzi arguably started, or at least was a part of the 'second generation' of SMGs: mostly made out of stamped sheet metal, simplistic, cheap to produce.
They were popular around the world, with law enforcement and secret services. A compact and capable SMG lent itself nicely to those roles.
Of course, it was also popular with Hollywood...
The magazine in the grip was also a design choice, the Israelis wanted the ability to reload in the dark without fumbling around, and the natural intuition of your hands knowing where each other is made it possible. The Uzi gains its name from its designer, Major Uziel Gal. The designer didn't want a gun named after him, but it happened anyway.
The Micro Uzi happened when IMI took the original design and shortened an already short gun by almost 20cm. This also caused the fire rate to double, from a mild and controllable 600 rpm to over 1200 rpm. The only reasons the Micro Uzi exists is... increased concealability and reduced weight. The usability of full auto mode is... debatable. The gun is so short and with such high RoF that it suffers from MAC-10 syndrome. Magazines don't last long, and you won't hit much. If using it in semi auto mode, a standard handgun performs better.
The larger Uzi was the gold standard for SMGs as a whole: controllable, reliable, and easy to use... until the MP5 came out and made everything else (including the Uzis) look like toys.

Costume Shilling #9: It's a Matter of Trust