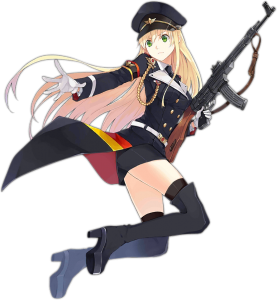 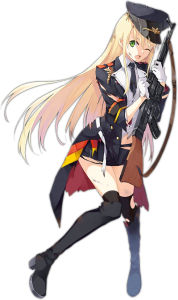 Being an HE Grenadier AR is enough to seal StG’s fate as an AR best left forgotten, which is ironic, given that the StG44 rifle is what cemented the Assault Rifle class in real life. High Explosive grenade, unlike normal Anti-Personnel grenade, has three different multipliers and blast zones radius, with the smallest blast radius having the highest multiplier. While on paper that sounds great for nuking meatshields, and inflicting damage on the fragile DPS backline, in practice it does the opposite: it’s not strong enough to kill the meatshields, and it’s weak enough to make the backline laugh at your echelon while they tear apart your tanks. StG44 is as cute and precious as she is useless. Keep the career reward one in your armory as a reminder of how much injustice this cute, pretty german hard worker was by MICA, or as an expensive dummy.

With much needed Damage, Accuracy and RoF stat buffs, StG44 mod also gets a 20% buff for her standard grenade, and explosions that explode depending if the enemy is on an overlapping radius. In theory, this would make StG44 one hell of a grenadier, possibly rivaling Soppo. In practice, it’s not enough to bring StG44 anywhere close to the meta. She becomes an okay AR, and okay Grenadier, so she is actually usable for events and story chapters. Situations that need meta dolls, like Dual Randomness nade fest, are wholly out of her reach.

60% Accuracy and 20% evasion means that StG could theoretically buff a direct fire SMG, as they need Accuracy to hit enemies, and the evasion helps keep links alive longer.

Bearing a high HP stat of 635, for an AR, means that, since she can’t be used to kill enemies, you can at least use her as a last measure to tank enemies as her garbage DPS let your SMG tanks die. In all seriousness, don’t do that, just don’t use her.

StG is a cute hard worker that puts a lot of emphasis on looking professional. Look, I ran out of strengths to write about okay? At least she is pretty.

A grenade skill that deals 4.5/1.8/1x damage to enemies within a radius of 1/2.5/4 units. On paper, the multipliers would have been big enough to significantly damage meatshields, and weaken the backline, where fragile, high DPS enemy units usually are. Guards + Jaegers, an enemy comp often seen in early to mid content, would have been child play for HE grenadiers. But, in reality, it’s the reverse, as the multipliers are too low to weaken the frontline, and too low to even chip the backline.

By being rewarded half levelled upon completing 2-5, StG is taking the spot that a more useful doll could have had. Commanders are rewarded M4A1 after completing 2-6, and by this point they usually have M14 and Galil/OTs-12/FNC in their teams, which means StG is only useful to fill up logistics teams early on.

By having her base nade damage increased by 20%, on top of explosions in the overlapping areas, StG actually manages to be a decent Grenadier

The buffs she received from her Mod I, Mod II and Mod III actually leave her with decent stats, bar her accuracy. That means she actually turns out to have a decent DPS outside of her skill. She will still lag behind her grenadier counterparts, namely 416 Mod and M4 SOPMOD II with MOD II, as well as typical self buffer ARs.

Part of her fix involves maxing her SPEQ and getting her to Mod 3, which is incredibly expensive for a doll that will rarely see the battlefield.

Being a grenadier in essence still means StG44Mod competes with 416 Mod and a neural upgraded SOPMOD II, both the gold standard in grenadier T-Dolls.

As StG is in dire need of Damage buffs, SMGs with damage tiles are her lords and saviors, such as UMP45, JS 9, and Lusa. M4A1, due to her AR buffing tiles, also is her best friend.

If M4A1 is not available, a Damage Buffing Handgun can be substituted in position 4. STG 44 can be placed in position 1 or 7, although to maximize her damage dealing potential position 7 is recommended.

Don’t be fooled by the fact that StG44 Mod can buff ARs as well because Accuracy has minimal effects for ARs and the Evasion buff is entirely undeeded. Thus the same recommendations for her pre mod also apply here: Damage Tile Buffing SMGs are her best friend, as well as M4A1. She is actually fieldable modded, so yorokobe Shikikans.

If M4A1 is not available, a Damage Buffing Handgun can be substituted in position 4. STG 44 can be placed in position 1 or 7, although to maximize her damage dealing potential position 7 is recommended.

StG stands for SturmGewehr, which translates to Storm Rifle. The term Assault Rifle originated as war propaganda, which ended up being the de facto name for this type of weapon, as it carries power and versatility but not war tide changing powers, versus “Intermediate Rifle” which sounds lame, and is the first documented case of this term.
The gun wasn’t originally coined as StG, but as MP43 instead, Hitler was against putting the gun in service. However, in 1944, the rifle was already proven to be an effective weapon in combat, and was renamed as StG44.
Around the end of the war, there was a G43-based prototype that was roller-locked, but still had a gas system. During the trials, it was observed that, due to a tendency in the operating mechanism to have the bolt 'bounce' back, when fired in that moment, the action would open much faster, under higher pressures (more violently) than usual, because it wasn't fully locked.
From then, it was theorized that if the system was built to intentionally not be fully locked, it could work without a gas system entirely. This led to the creation of the Gerät 06H, exploiting that tendency: the omission of a gas system made it significantly cheaper and easier to produce. This rifle, the Gerät 06H, was later named StG45(M) - M stands for Mauser. For reference, while the StG44 cost 70 reichsmarks, the StG45 was projected to only cost 45 reichsmarks to make.
About 30 parts kits for these were completed before the war ended. (some) Mauser engineers fled Germany after the war, where a few ended up making another working prototype in France, where they tried to put the StG45(M) concept into use, but ultimately failed.
After that, they then went to Spain, to CETME and there they built a few successful models. The CETME C is basically the final iteration of the lineup before H&K purchased the design, made a few changes, and eventually became the G3.
Fun fact 1: The StG44, while not technically the first Assault Rifle to exist, was the first mass produced, successful one, and thus became the grandfather of modern ARs. Two of the most famous ARs in the world, AK-47 and M16, have their designs influenced by StG44, with the former having more obvious design elements in it.
Fun fact 2: As the war drew near its end, Germany suffered more and more bombings and industrial disruptions, which lead to a severe decrease in industrial equipment availability, as well as raw material quality. Because of that, late StG44s have extensive manufacturing issues that the initial batches didn’t.
Fun fact 3: the CETME C originated the G3 rifle, which proceeded to beat the FAL (G1), SiG510 (G2) and AR-10 (G4) in german trials, thus becoming the German Army’s standard rifle for many years.
Fun fact 4: Originally StG44 was in a team with Kar89k. In chapter 11N, MP41 and G43 are also introduced as part of the team. Because of their common origin, they are called the “German team”