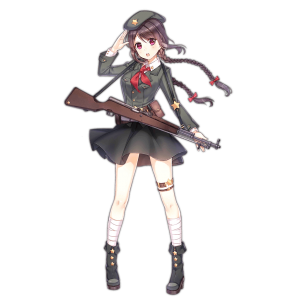 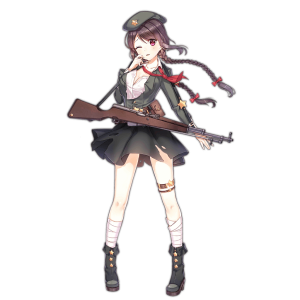 Type56R was a 3* RF login reward RF. Like most similar RFs, Type 56R is outclassed by most higher rarity self buffer RFs and also some of the ones of the same rarity, like M14. Her base stats, tiles, and skill are nothing remarkable, her firepower is even rather low. Pretty much the only reason to raise her would be to get her far better mod.

Upon neural upgrade, Type56R turns into an extremely competent RF and easily a contender for best generalist as well as a very useful elite killer.

Her mod makes her stats decent enough, and she gets a move speed bonus on top for her skill 1 and new tiles.

For skill 2 she passively does double damage at the start of fights and once every 3 seconds if she moves at all. Her critical damage to enemies passively scales the fewer links they have. All this extra damage gives her insane DPS and a huge edge over her competitors. Also she focuses on lower linked enemies, which are often the most dangerous enemies in groups.

Her special equipment at mod 3 isn’t that important, since sniper ammo exists. So while Type56R is an absolutely great choice, stopping at mod 2 is fine.

Due to her 3* rarity, Type56R’s base stats and skill multiplier are pretty poor.

Because she is a monthly login reward, Type56R is difficult to farm for dupes, making her a poor choice for a budget unit as well.

The fewer links the enemy has, the more damage Type56R Mod deals to them on critical hits. No matter how many links they started with. 4-link, 10% extra damage. 1-link, extra 40% damage.

Since her skill 2 is passive, Type56R Mod’s insanely high damage keeps up somewhat even when her skill 1 is on cooldown.

Double damage on the first bullet and 40% extra damage due to the target dummy being one link gives Type56R Mod a great candidate for faster data sim times where you want to kill the target in one bullet.

Moving Type56R for a moment to get her to fire a double damage shot to maximize her DPS every 3 seconds is incredibly tedious. It’s not required, but when optimizing it’s a pain and slipping up means a DPS loss. This is easily optimizable now that timestop is available on EN however.

Type56R’s insane damage stacking through both her skills could lead her to completely overkill enemies and wasting shots. Thankfully this is a nonconcern at higher levels.

Type56R Mod is one of those mods that turn an otherwise awful or dismissable unit into one of the best RFs in the game. Yeah.

At Mod 1, Her firepower massively improves to almost acceptable levels. Her rarity multipliers improve to 4* level. She gets a forward tile for better formation coverage. She also gets a move speed bonus on skill 1 in case you wanted her and Hanyang to run laps or dodge certain attacks for some reason.

When stopping after moving, Type56R Mod’s 2nd skill deals double damage for one attack. This can be activated once every 3 seconds. This bonus applies to her very first attack in a fight, since every doll is moving for an instant at the start of any fight. It’s also possible to slightly wiggle Type56R Mod every 3 seconds to get that bonus double damage to happen again. Due to the existence of bullet/freeze time, this is potentially optimiziable by moving her to another tile, but then immediately moving her back to where she started to have her only need to move for a fraction of a second.  (Her extra move speed isn’t actually important in this instance since she’d still take the same amount of time to get back).

Do note that taking too long to jiggle Type56R Mod for the damage or mistiming it can lower DPS instead. So it might be better to leave her alone if that extra DPS isn’t needed.

The second portion is that Type56R Mod deals 10% extra damage on crit for every link under 5 her target has, stacking additively. Their initial link count does not matter, just how many they have when shot. If they are originally 1-linked, she will still get 4 stacks and a bonus 40% damage on crit. She prioritizes enemies with lower links.

This means that against the many single-linked targets, bosses, target dummies, and injured enemies in the game, Type56R Mod specifically seeks out and deals up to a bonus 40% damage on top of her skill 1 and potentially the double damage after moving. Just make sure that she has a good critical hit rate.

So her skill 1 increases her damage dealt every shot. Her skill 2 doubles the damage she deals on the first shot and potentially once every 3 seconds. And her skill 2 also makes her passively do more damage to injured and low-linked enemies harder. And her skill 2 is ALWAYS on. Despite her otherwise mediocre base stats, the total DPS increase from the sum total of these puts Type56R Mod on par with or ahead of other top performing RFs. It’s really good.

She is also useful if the enemies that should be prioritized are the lower-linked enemies. Instead of focusing on the beefy multi-linked damage sponges, Type56R Mod can prioritize more dangerous enemy DPS and supports. Since no other RF has a particularly reliable way to target middle-of-the-pack units like she can, this is an extremely valuable trait. Obviously it can backfire if the biggest problem is the higher linked enemies.

Her entire skill 2 is applied during data sim runs as well. Since the target is a 1-link dummy and you’d want to ideally kill it in the first shot, Type56R Mod is very useful for speedrunning data sims.

Taking Type56R to Mod 3 is not really necessary. Her special equipment, special tracer rounds, give the same firepower as sniper ammo, just more AP when most enemies have less than that much armor anyways. The only bonus stat from the mod is 1 extra firepower. That’s it. So stopping at Mod 2 will suffice. But aspiring commanders absolutely should get her neural upgrade.

If you are so insistent on using Type56R before her neural upgrade, then at least let the other RF in the RFHG be an acceptably strong unit to pick up the slack.

If you are so insistent on using Type56R before her neural upgrade, then at least let the other RF in the RFHG be an acceptably strong unit to pick up the slack.