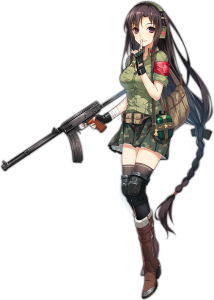 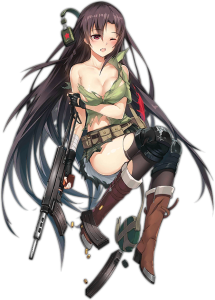 Type 64 is one of the better 2* SMG’s that starting Commanders can consider for early game use. Although, being a 2* rarity, that’s not saying much, considering what 3* competition can be had really early on for clearing early chapters and as login rewards for new commanders. Although her buff tiles are a little confused, they can be pretty helpful for any AR’s that accept ROF buffing (This utility is also limited, due to most AR's self-buffing their ROF to sufficient levels). As a Stun nade SMG, her skill inherently has some flaws in that in battle you must wait a considerable amount of time for the skill to see any use, typically past the length of free time delaying the enemy that can be bought from kiting. While her skill can be buffed to up to 3.2 seconds by skill training, there are a myriad of better dolls that benefit much greater from skill training than her. Overall, she’s a doll that can be thrown in a first team or used in a hasty second echelon while commanders are still building out their first echelon. Thankfully, with her mod, there are still worse ways you can spend your neural fragments.

Type 64’s mod is both unique and unfortunate in that her mod brings a unique skill to the table on a doll that really shouldn’t be heavily considered for late-game content. Although her skill is currently unique in the EN server, with no other stun doll being able to affect stun immune enemies, there isn’t a convincing reason to mod her for this niche. Thankfully, there are still worse ways you can spend your neural fragments.

What she brings to the table in terms of her unique skill is overshadowed heavily by her weak stats and lackluster performance as a support with a non-DPS skill. While there may be certain fights where a 8 second on/off accuracy debuff for bossing may be helpful, none of the currently available fights present such a challenge that such a niche skill would be applicable in, and by the time there will be on the EN server other superior mods such as UMP 9 will be available. The one limited use she has she already shares with other stunners with higher stats (like UMP 9 non mod), and that’s if the player knows how to kite large mobs of enemies and can stall them until the stun takes place, following up with the AR’s to sweep the floor with the mob using a grenade and/or other powerful self buff skills. Overall, she’s a hard mod to recommend due to how awkwardly she sits in the stack compared to other flash dolls such as Ump 9 and Type 79, and comes off as a low priority mod at best.

Compared to most dolls in her class, she comes out as average if-not slightly focused more towards Evasion tanking than her other 2* counterparts.

In the cases where battles are still relatively short in the early game, stun grenades can be very potent. The radius of the stun effect usually has the effect to halt decent chunks of enemies given good targeting and depending on enemy types. (It should also go without mentioning these stuns do not work on Elite enemy types or bosses)

Albeit rather weak and low-priority to mod, Type 64 does get several unique buffs to her skills and modest upgrades to her tile / stats.

This is normal for a doll intended as an early-game tank, and for her rarity actually breaks out to be about average, but commanders bringing her past the early game low-accuracy enemies will find her low star rarity becoming an issue for those higher accuracy Jaegers and Vespids that start appearing in later chapters.

Her skill suggests use as a main tank, however with it being placed directly behind her, it forces commanders to make compromises in placing her on tiles that make sense for her role.

Stun nade has high ICD and is weak overall

In addition to the 5 second Initial Cooldown, the doll also takes 1 additional second to throw the stun, effectively meaning it takes 6 seconds for the stun to deploy which is on par with HG cooldowns and AR grenades which would just clear would-be mobs of enemies to begin with rather than stun them. This is an inherent drawback of stun nade dolls in that they must wait or buy time to use their skill.

Commanders willing to spend the extra data on her may find special use cases for her in ARSMG fights against certain elite enemies and bosses, albeit with limited utility due to her pretty run-of-the-mill statbase. The HG-like duration of the debuff also regains a lot of the downtime of the average stun skill

This upgrade may not seem like much, and in battles that last less than ~11 seconds it isn’t, but it does have the side-effect of letting you invest less data into stun skills to save for other dolls if you’re only going for Mod 1

For any of those SKK’s out there that already have all the medium and high [priority neural modifications], having an extra mod doll to throw in logistics can be listed as one positive trait of Type 64 mod

Negligible stat improvements from mod I to max mod III

Even with her mod improvements, her performance as a tanker is still barely in line with UMP9

Although Type 64’s stun does apply a unique debuff to elite enemies immune to stuns, this will later be outdone by UMP9’s neural modification which is tied to the upcoming major story event. UMP9’s evasion is significantly higher, her healthpool greater, she can equip 2 SPEQ’s, her enhanced stun grenade lasts 4.5 seconds instead of only 4 and she has a more generally useful elite-enemy skill than Type 64 (Self buffs herself +25% EVA + gives a 25 HP shield to all allies!)

This would be the most standard formation for placing Type 64 in. Here she would best be paired with any decent main tank SMG which at leasts buffs positions 1 and 7 (Read: Paired with an SMG suited for main tank roles and ideally doesn’t just buff directly behind them like Type 64)

Using some of the login rewards given to commanders in the early game, Type 64 can potentially fit into an early game echelon while they clear initial story maps to obtain AR team dolls and build up cores for better team options. Recommended 3* SMG team options work here, such as Sten Mk II. In a pinch, dolls like Ingram or PPS-43 are doable, but non-ideal.
Note that dolls such as OTs-12 and FNC won't benefit from 64's tile here (although OTs-12, for example, wouldn't benefit much to begin with using her, since she's a self-ROF up AR.)