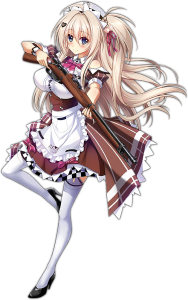 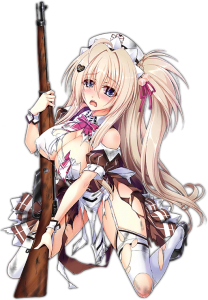 Hanyang Type 88 (Hereafter Hanyang) is a low rarity Rifle, with the problems to match. From the beginning her stats are a letdown, sporting one of the worst Accuracies of any RF, an equally poor rate of Fire, and a lacking the Damage stat to compensate for either of these weaknesses. Equally, she lacks a Skill to pull herself up from obscurity, being stuck with Damage Focus N. While this does give her a massive Damage Boost, that buff is relegated to Night battles, and in that sphere, Hanyang’s low Accuracy means she should be left to fighting only non-evasive enemies.

When the Rail Accelerated Rounds are added to the Black Market, they are a somewhat expensive, but valuable pickup, thanks to the increased Damage.

Type 88’s (hereafter Hanyang) Neural Upgrade radically redefines her role in your Echelons, taking her from a traditional RF to a wide area damage dealer. This comes from her second Skill ‘Almighty Power’ which is discussed at length below, as it has several quirks that should be considered, alongside being rather lengthy.

Outside of her second Skill, Hanyang gains much-needed Damage from her Neural Upgrade, as well as a massive boost to her Rate of Fire, bringing her more in line with the DPS rifles that are typically used. While a six-point jump in RoF does not seem like much, thanks to the low base RoF of the RF class, it has a substantial effect of letting Hanyang fire eight frames faster (see here for details). Even better, the entirety of her Rate of Fire boost, and most of her Damage is front-loaded to Mod 1, although Hanyang needs Mod 2 at minimum, and prefers to be pushed to Mod 3 for maximum effectiveness, which somewhat mitigates this value. Her Damage Focus Skill also gains a slight multiplier boost bringing it in line with her new rarity, as well as a movement speed increase. Both of these are nice to have additions, but neither radically change how Hanyang is used, not when compared to the Almighty Power. This is further bolstered by a Damage boost from her Special Equipment, both from Mod 3 and later the Black Market, which provides five additional Damage each.

The downside to this is that Hanyang absolutely needs her Mod 2, and peaks at Mod 3 with further investment beyond that important for those looking to maximize her potential, as her final point of Damage is not obtained at level 115.

Damaged
Lotus of the East Lake

As a 3* RF, she costs far fewer cores to raise prior to her mod.

Has a Neural Upgrade:

Her Neural Upgrade completely redefines her role and makes her a valuable addition to your armory.

31 RoF and 108 Damage are both on the lower end of Rifles, and 60 Accuracy further handicaps her DPS.

A night-focused Skill is already a limit on her niche, but when combined with her Stateline she will struggle even further.

Her Second Skill revolutionizes how Hanyang is used in battle, giving her large AoE Damage, a piercing on certain shots, and a few other tricks.

Hanyang's Neural Upgrade provides sizable boosts to her stats that go a long way to fixing her deficiencies in those fields.

Both her Mod 3 equipment and the later addition of a Black Market Special Equipment provide her additional boosts to Damage.

Type 88 prefers Mod 3, her Mod Special Equipment, and eventually a Black Market Special Equip for maximum effectiveness. This makes her a larger investment than some of her contemporaries.

While most of Hanyang’s Neural upgrade is fairly standard multiplier bonuses, and stat upgrades, her second Skill joins the ranks of long GFL skill texts, and does a good job of obfuscating its true power. While none of this Skill is ‘fluff’ some parts are more important than others.

First, the AoE attack on Damage Focus’s Activation, which varies based upon the highest HP enemy. A rocket if the enemy is Armored, a cluster grenade if they are unarmored. Thanks to her relatively high base Damage, this cannot be ignored as a source of Damage but is overall merely a strong bonus, rather than the focal point of her kit. The same is true of the melee attack. While the piercing effect is useful, as a rule, you do not want Hanyang to be in position to be attacking in Melee.

The important portion of this Skill is the line in the middle of the text, ‘While Skill is active, all attacks will pierce at 1x Damage’. Much like Kord’s pierce, this is incredibly potent, allowing Hanyang to clear groups of enemies with frightening speed. As a consequence of her Rifle Class base Damage and Damage boosting Skill, Hanyang’s Damage output against groups of enemies is fantastic, and even gives her a strong niche in Day battles, despite her overall weaker Damage multiplier under those conditions. The value of being able to damage more enemies than just the one you are targeting cannot be understated, as she is effectively multiplying her Damage output by the number of enemies hit, but bear in mind the overwhelming majority of the utility is in her damage against groups; against a single target, Hanyang struggles to keep pace relative to her peers.

This effect is illustrated in battle by Hanyang’s attacks transforming into a laser that visually travels from Hanyang to her target, and slowly fading out. This results in her attack animation being somewhat deceptive, as the actual hit is applied slightly later than the visuals might indicate. Consider this gif.

If you watch, the Damage occurs as the laser is starting to fade, as opposed to when it first visually appears. This Gif is slightly outdated, as Hanyang's laser now correctly moved to adjust for her targeting.

Contrary to what the visuals indicate, Hanyang does still target normally, as you can see above. Bear this in mind when considering the piercing effect, and its quirks as discussed below.

The piercing effect works in a manner that is slightly counterintuitive as well. First: While it may visually appear that all Dummies are firing a shot, behind the scenes, all of Hanyang's shots originate from the 'main' link, or the one standing at the front of her unit on the screen. This is important, because:

Instead of drawing a line between Hanyang and her target, and damaging every enemy along this line, it instead draws hitboxes at set intervals. This means that there is a chance for an enemy to be skipped by the piercing damage if they happen to exist in the gaps between these hitboxes. for a good illustration of how this can be a problem, consider this example:

This has a perhaps unintended side effect. Because Hanyang's Peirce generates hitboxes in a horizontal line from the muzzle of the gun on her chibi, instead of a fixed position Skins that modify that position can adversely affect her in battle. At present, this appears to, in a peak moment of irony, be a detriment reserved for her Mod Skin, as during her firing animation Hanyang floats a few pixels into the air. This moves the hitboxes up a few pixels in turn, which increases the chances of enemies slipping through the gaps in the line. For those looking to squeeze their very own Gundam for every bit of performance, leaving her in her original Skin is recommended.

Much of the information on hitboxes and skins is compiled from this thread: https://gall.dcinside.com/mgallery/board/view/?id=micateam&no=1635018&page=1

Her Rifle partner should be a strong self buffer, such as Lee Enfield, WA2000, or similiar.

Hanyang should be placed in position 1 prior to her Neural upgrade, leaving her RF partner to get the majority of the Buffs, and thus, do the majority fo the fighting.

Hanyang’s Neural upgrade values Rate of Fire buffs to get the most value possible out of her Skill’s uptime. Special mention goes to Webley who gives Hanyang a much greater Skill Uptime thanks to her buff if Hanyang is the Echelon leader. Balancing her Rate of Fire and Damage is important, as Hanyang can amplify the effects of Damage buffs substantially.

In terms of Rifle partners, Hanyang can either take a generalist partner, to shore up her performance against more generalized groups of enemies, or she can take an equally specialized partner such as KSVK’s Neural Upgrade to double down on her niche of handling hordes of enemies. While Hanyang can be used as a general AoE Damage machine, she often is placed in specialized teams.

When placed in a standard RF/HG Echelon Hanyang can now safely occupy Position 7, able to apply her Cooldown buff to both frontline Handguns, as well as take better advantage of the Buffs provided.