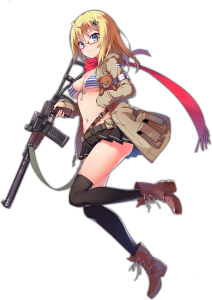 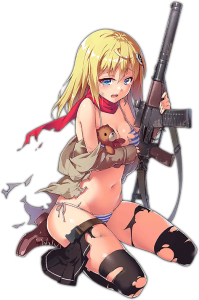 AS Val is a 4★ AR specialising in night battles. While toting an identical skill to 9A-91, the two couldn’t be further apart. While 9A-91 is a solid night AR option, AS Val simply falls flat on her face.

AS Val’s base stats are terrible. At time of writing, she has the lowest Damage of all ARs with average Rate of Fire and Accuracy. In all these aspects, she is inferior to 9A-91. She also has awful tile placement, buffing to the side of her rather than in front.

The base form of AS Val is simply not worth it in any aspect when 9A-91 exists and does literally everything that matters better. Yet, AS Val should still be raised. Why’s that? It’s because of her Digimind Upgrade that changes everything...

AS Val MOD is such a massive turnaround from her base form that it’s almost unreal. She goes from being a terrible AR to a true powerhouse of night warfare. Provided that you have her ideal teammates, AS Val MOD at max potential is a sight to behold.

All her base faults are addressed. She now has a much better Damage stat thanks to her raw boost and Special Equipment. Her tiles now face forward, so her strong buffs can actually be used. The biggest addition though is her busted Skill 2, allowing her to completely forego using a PEQ at Night which skyrockets her DPS past the competition, even OTs-14.

The only notable drawback is that she does need a specific team comp to reach this max potential. She’ll still be strong when upgraded even without the ideal teammates, but not anywhere close to what she could be achieving.

AS Val MOD is overall phenomenal and is an upgrade that should be on everyone’s radar. Despite her rough start in GFL, she’s bounced back massively and this perky little AR will show you her true potential.

If anything positive can be said about the base form of AS Val, it’s that her skill, Damage Focus N, is still technically a great skill for night battles. This skill alone is still not worth using AS Val in her base form though.

AS Val’s Damage stat sits at an absolutely pitiful 39, the lowest amongst ARs. Her Accuracy of 49 and Rate of Fire of 75 are both fairly average for ARs. All of this combines to give AS Val very bad overall DPS.

The buffs on AS Val’s tile are actually very good, coming with 25% Damage and 10% Rate of Fire. The problem though is she buffs the tile above her in the column. Given that SMGs and ARs are never normally placed in the same column, this makes her tiles completely useless in practice

AS Val MOD’s Skill 2 is called Faith. This skill grants 3 seconds of perfect accuracy whenever AS Val receives a Damage boost. What is so crazy about this is it’s possible to combo a variety of Damage buffs to give AS Val almost constant perfect accuracy. For example, Python and a Fairy with the Fervor talent will give AS Val perfect accuracy for 19 of the first 20 seconds in a battle. This allows AS Val to use a VFL at Night which is a massive contribution to her DPS.

You can refer to this Google Sheet for specific details on the use of AS Val MOD’s Skill 2.

AS Val receives a hefty Damage boost overall. Her raw boosts from the upgrade in conjunction with her Special Equipment puts her up to a much better Damage stat of 47

AS Val now has a tile facing in front of her, allowing her to provide an SMG with a hefty offensive bonus of 25% Damage and 15% Rate of Fire

Ideally, AS Val needs a team built around maximizing the uptime of her Skill 2. Depending on your roster, this can be tricky. Python for example is a Drop Only doll that not everyone might have. Thankfully, there is the more easily accessible alternative of M1895 MOD, though that still requires upgrading another doll.

If you’re serious about using base form AS Val, then she’ll want teammates that will buff her Damage. This could include HGs such as Grizzly or Mk23 as well as SMGs such as C-MS or UMP45. A little bit of extra Rate of Fire from someone like JS 9 or Stechkin also wouldn’t be a bad idea. For DPS allies, another night AR such as OTs-14, 9A-91, or T65 will serve well.

AS Val can go into any slot that an AR might occupy in a night ARSMG. It is recommended to place her into Position 1 so that ARs with tile placements that work can buff the SMGs.

Python is, without doubt, the best teammate that AS Val MOD can have. Her plus a fairy with Fervor grants AS Val near perfect uptime on her Skill 2 within the first 20 seconds. M1895 MOD is a good alternative. Outside of this, AS Val will actually benefit from crit rate buffs in addition to regular Damage and Rate of Fire buffs, making SMGs like UMP45 and JS 9 more appealing than before. AS Val will regardless enjoy any offensive boosts that may be given to her from dolls such as Mk23, P22, and so on.

AS Val can once again go into any slot that an AR might occupy in a Night ARSMG. With her tiles facing forward, placing her into Position 7 is now much more appealing to allow her to buff the off-tank if it’s an SMG.

The Soviet-designed Assault Rifle AS Val began development in the 1980’s under the codename “Shaft”. It finished development in 1987, was quickly added to the arsenal of the Soviet Army, and is still a part of various military units of present-day Russia. Due to the expensive and rare nature of the weapon, it is deployed rarely and is usually used in sabotage or reconnaissance missions.