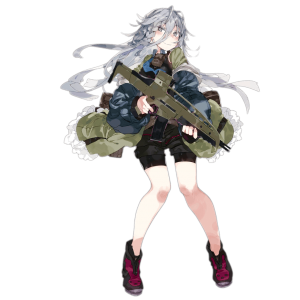 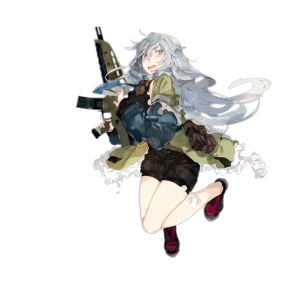 XM8 exists in an awkward place, where she is overshadowed by both of her irl competitors: M4 SOPMOD is a unit that Commanders acquire early on which has similar stats, and can equip two Acessories (which is an advantage on early Night Missions); and 416, which has a higher grenade multiplier due to being a 5 star unit. With a free unit, and a 5 star unit, there’s little reason to go after XM8, unless it’s to Mod her.

How the turntables. Overshadowed by M4 SOPMOD since the dawn of the game, XM8 gets a mod that brings her to the spotlight meant for Soppo. With both an ICD reduction, and a Skill 2 that cleanses enemy debuffs and creates a debuff area, XM8 manages to make herself relevant in a niche that relies on her cleaning enemy buffs, and/or stunning enemies for brief periods. On top of that, her AoE has the same targeting as her grenade, which makes it predictable.

AP Grenadiers have an 8s ICD, which means that they see little use in quick battles, which are common early on. And later on, when battles start dragging out, enemies also have a bigger HP pool…

Commanders acquire M4 SOPMOD on Chapter 2-6. On top of being awarded to every Commander, she can also equip two Accessories, which means she has an advantage over XM8 in early Night Missions.

When bigger groups of enemies start appearing, they also tend to be beefier, which means that 416 is preferred over XM8 due to her 5 star multiplier and higher FP stat.

Commanders are likely to anchor 416, because of how great her Mod is, which is yet another AP nader that new Commanders have at their disposal, reducing even further any chance that XM8 would be fielded.

At 6s ICD, XM8 is one of the few AP grenadiers with this cooldown, which puts her leagues above the others, including M4 SOPMOD.

Her buff cleansing is a welcome addition when enemies specialized in buffing units have become common in late game.

Her AoE debuff not only has the same targeting system as the AP nade, it also targets the next group of enemies if her nade happens to kill its target, which means that it’s quite unlikely to be wasted. Moreover, it debuffs, for 8 seconds, 25% Damage and 50% Accuracy, both very relevant starts to debuff. It can also stun enemies inside the AoE for 1.5s

As the defacto 6s ICD nader, XM8Mod lives in the shadow of 416Mod just as much as her premod does.

Stun only works on stunnable enemies

So no stunning Gundams, or most of the Paradeus’ Faction enemies, or any other unstunnable enemy. This limit severely her use against Paradeus enemies, which are pretty common in endgame content.

While the effect has an AoE, it only affects 1 target per effect over time.