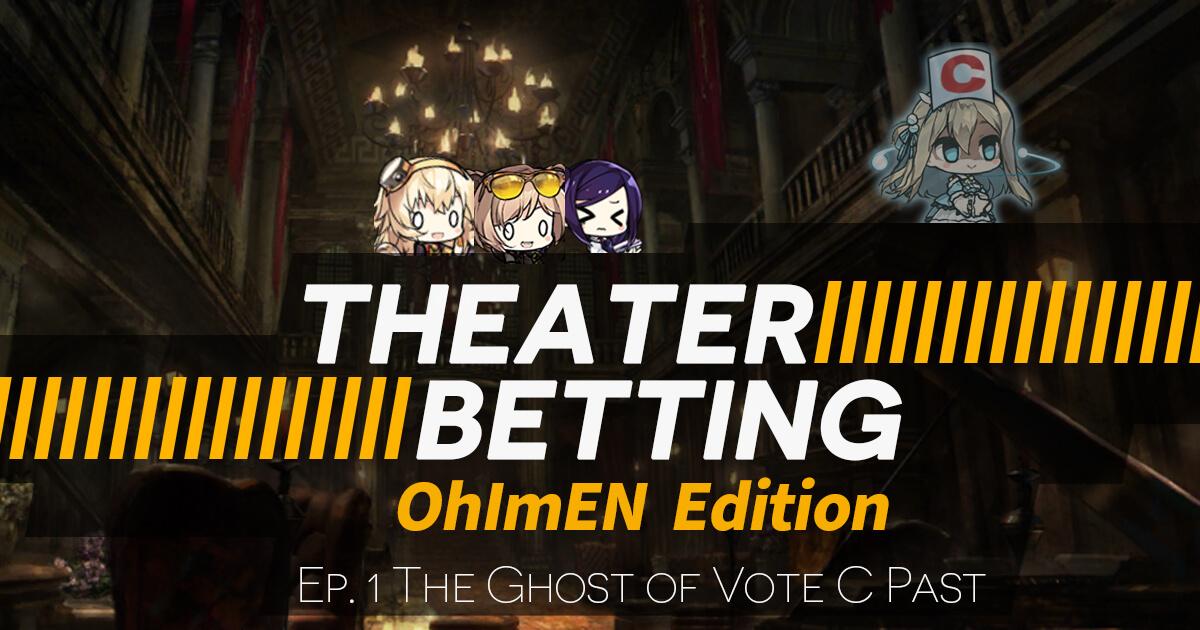 Table of Contents
Article by
MatthewStarbuck

Theater II Betting Episode 0: Shipped to Brazil
Tap or hover over the chibis to see who is speaking! Or memorize it all if you aren't a scrub.

Hello everyone, Welcome back to the Theater Betting Panel for Theater II!

If you missed introductions yesterday, my name is Matt and I am hosting this Theater's Panel. Don't worry. We have brought together a very diverse group of players from all across the EN spectrum for this panel, to see how a microcosm of the western GFL community would perform in Theater predictions against the Dalao panel.

For anyone who is not familiar with Theater, it’s like you’re playing Defense Drill but with extra steps.

Basically, you build some teams to run through 10 waves of enemies to get points and materials.

You should also be using those materials to send out drones (investigation), which you use to scout different areas (such as Area C) for additional points. Remember to investigate before spending on infrastructure!

As players continue to progress through the stages together, you’ll unlock more challenging stages, some of which have bosses which yield a large amount of points. Oh, and do not worry too much about those bosses, they are just straight up cut scenes with no player input, with score determined by your teams' estimated effectiveness against that particular boss. Fun, right?

To be more specific, you can conduct up to two raids per day. If you make a mistake, you get one (and only one) free do-over per day by retreating and starting over, so use it wisely.

At first, there are Three Zones, each w...you know what... I think Gamepress has a guide...yep they have a guide. You can find out more at the page linked below!

Don't worry, I am not sponsored or was in any way forced to link this. It's my personal advice that it is a decent guide.

Dear Commanders,
Here’s an introduction to the Theater event that will commence on Aug. 4th! It is a time-limited event that is accessible periodically. After the last Theater event, are you ready for this one?#GirlsFrontline pic.twitter.com/j08sfyYnVt

Wait, is this Core 8 gonna be better or worse than the last one? We're getting more SWAP right?

I personally am a bit worried for Core 8, but I think since I was able to survive Isomer Normal with very little difficulty, I should be fine.

The difference between Isomer Normal and Hard was pretty big - I fell right in the cracks. I was unable to do Hard, but swept easy; so if I had more combat teams, I probably could have done a hard mode run. Personally, I should thrive in Theater as a no-duper, but I still lack sufficient unit diversity since I didn't manage to train everyone up.

Just remember EN, MICA kinda rigged it against us before as we did not have the Armor Penetration rework, this time around, AP is where it should have been, so the later Core nodes will be much easier for everyone - I hope. (But then again, it is MICA.)

If you could destroy Core 8 while having max 24% bonus, you will probably have top 5% in the bag. CE Stacking and the Theater Scouting Roulette that is EN will barely make a dent compared to your consistent point income.

Speaking of theater EN...someone remind me..how many points are the Zones again for scouting? Wasn't it 10-20-30?

Top Three Things to Never ask:
1: A man his salary
2: A woman her age
3: Matt where the numbers went

Despite being the son of an accountant, my math skills are very...lacking...

I am still the bartender behind one of the larger, more intricate, and sometimes excessive EN Theater Data charts, even if I might not be the most qualified to do so. You can check our last season's form here:

EN Theater I for Brainlets

I'll be doing one for this season as well. I try my best to update it as soon as I get the information when ceasefire starts! (Unless I am asleep unfortunately. Which does happen. I'm not a morning person.)

The good news, at least for the first week, is that any commander can always choose their difficulty. Even when the Core Zone is unlocked, they can do something like Core 3 and face easier enemies and still get a lot of rewards just for participating.

Just remember to do your two daily runs, as well as your scouting, and submit your CBT forms!

You bet there is a Support Bonus. For the first day it starts out on Elementary zone, or Easy. After Day 1, it goes to whichever zone has the least percent cleared - the zone that needs support to catch up!

As for CE Stacking, yes, but do not CE stack if you are not confident you can clear the node. That can be dangerous and caused a lot of players to drop like bricks and hard when Core 8 came.

What about infrastructure? What should I invest in?

Much like your Bitcoin, your investment is your business. I do caution commanders who burn all of their materials instantly - Save some for Core. When Core 1 comes, you WILL NOT...and I MEAN WILL NOT have enough to send all of your drones if you blow your load too soon.The resource income drops for Core 1 hard enough that people who did not save even a little, suffered - the data backs that claim, believe it or not.

I guess I will need to refresh my memory with that Gamepress Guide huh. Time to read.

Can I come back and participate in Day 1 since there are no implications?

Don't rig it....and maybe one day I will snap you back into existence.

People are gonna default A on day 1, I'm calling 50%+ of the votes going there. Might as well vote C for day 1 since C getting the 100% score gives almost the same amount of points as B winning.

I think 50% on day 1 is a little high. Honestly, it only got so high because of the good Vote C Propaganda, as well as the actual thought that C would actually win. (At least C got a win on Day 17.)

I now disappear with the cat.

I guess so, now that Ceia has returned to his Spectral form. Might as well see what everyone else has to say. What say you Paragon?

I don't know about you all, but I am going to be parodying a copy-pasta every day for the explanations.

I mean, Panel I did the same thing, so why can't we. Also, Paragon...your math is incredible. Let us see how that plays out.

By the way...Today's panel is sponsored by Girls' Frontline EN, one of the most ambitious mobile role-playing games of 2020 and it's totally free! Currently more than 1 million brainlets have joined EN over the last two years, and it's hard as hell! Some of the dolls in the game can be customized with useless SPEQ scopes on ARs that won't be usable at night! The gimmicky bosses have some ridiculous skills of their own and figuring out the perfect party and strategy to overtake them's a lot of BS! Currently with over 300,000 reviews that definitely aren't just written by alts of MDR, EN has almost a perfect rating on Kalina's Store! The community is growing fast, the highly dreaded new Theater event is coming soon, and you might even get stuck in Core 6 like the rest of us! It's easier to start now than ever with career quests for new players you get a new daily login reward for the first 7 days that you play in the game! So what are you waiting for? Go to the App Store or Google Play, click on the special links, and you'll become a brainlet just like me; I'll see you there!

I think I should be drunk before we do these.

You alt+enter to break text within a cell genius...

Oh. Yeah, I guess that works. Don't mind me. Just one my third glass of wine.

The results are in!

You all B voters. A shame.

It should have been a C landslide. How could you all!

Hey, Cleista? Do you know anything about CBT?

I still can't believe they got away with using that as an acronym.

I, the birb in debt to the IRS, am hosting CBT 2: Electric Boogaloo.

For anyone not familiar, on top of the normal voting in-game, you can fill out this form link and submit information to receive some extra rewards.

More information on CBT can be found below.

Hey EN! So for those of you who know me, I love my Propaganda. This Panel, we want to see YOUR propaganda! Be it Vote A;B; or the Famous Vote C. Send me your propaganda on Twitter (@GandKTV) or on Discord (MatthewStarbuck#0187, , and it might be featured in the panel!

Today, I want to feature some Vote A memes. Today's propaganda is from Brekkie. Be sure to check out his Twitter for other Dorothy art and some Isomer Ranking stuffs. (Hopefully he will break Shattered Connexion too) 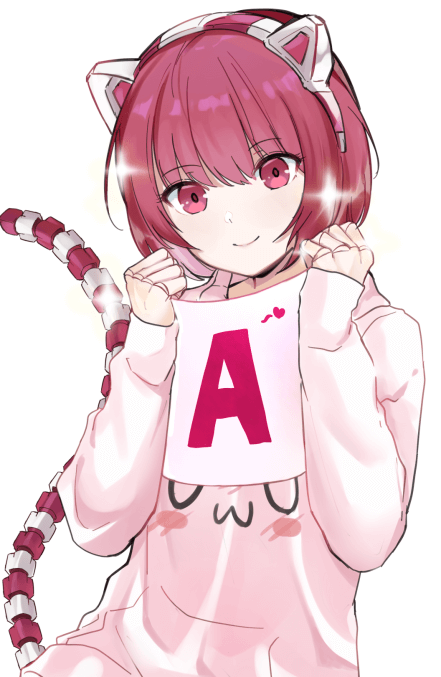 It appears as if the Panel Predicts a B victory for the first day of Theater II!

Check back tomorrow as the panel review's the first day of Theater II and gives some ENsight on our predictions for Day II! See you tomorrow! 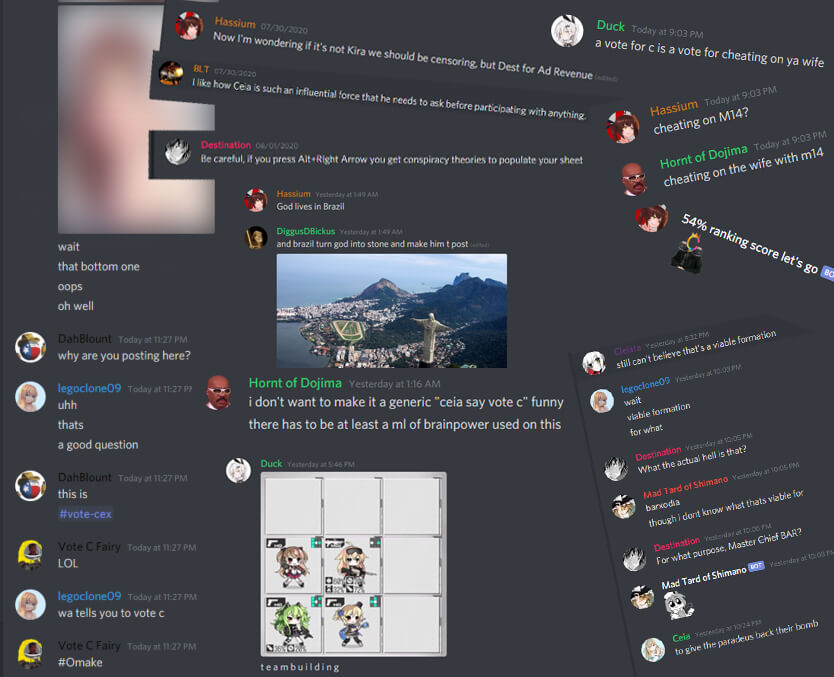 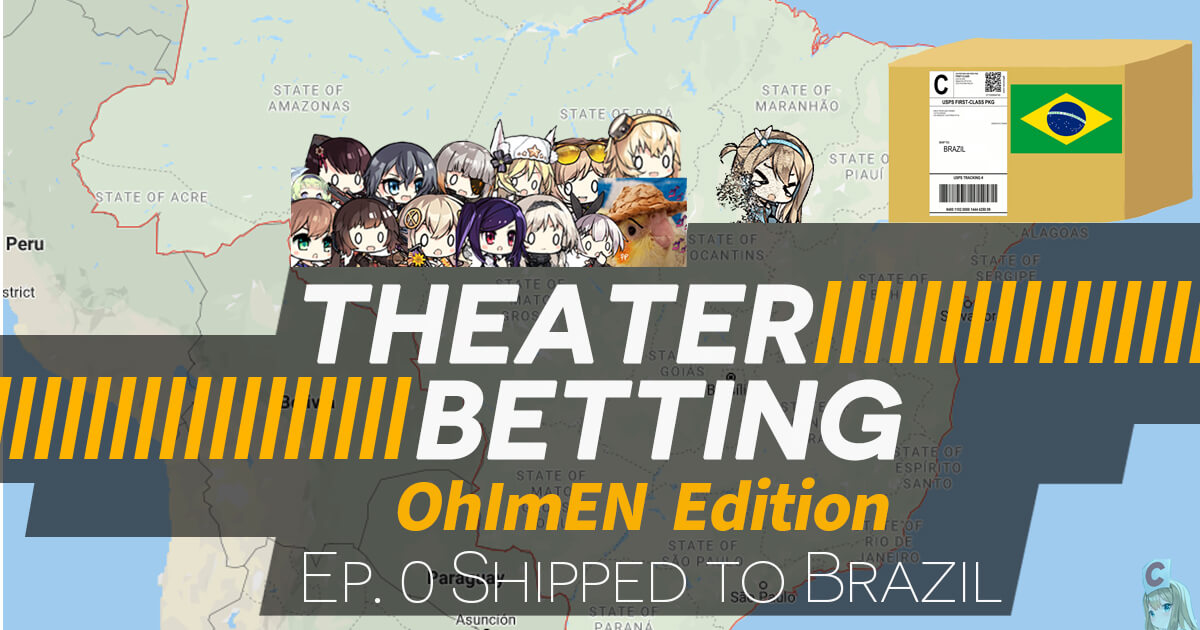