At PAX West 2022, I was given the opportunity to play God of Riffs - a VR rhythm game akin to Beat Saber. In this article, I’ll explain my thoughts on the game. 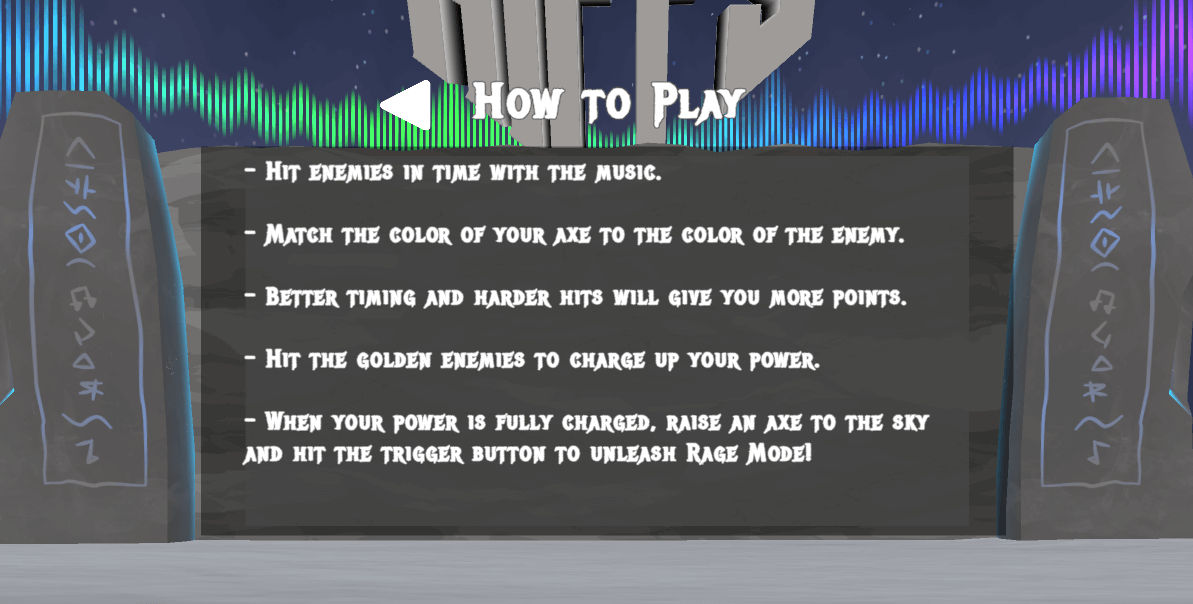 God of Riffs, as previously stated, is a VR rhythm game. The player’s controllers extend into two battleax-shaped guitars, one red and one blue, that they must swing at incoming enemies in the form of skeletons and flying skulls. The enemies come in three colors: red, blue, and gold. Each enemy must be hit with the matching-colored guitar - in the case of gold enemies, either guitar will do.

The enemies spawn and approach you such that they will enter striking range of your battleaxes roughly in time with the music. Points are calculated based on three main factors:

In addition, hitting gold enemies will charge up your power gauge. When it is full, you can trigger “Rage Mode”, which further increases your score for a short period of time.

In addition to charts mapped in-house by the developers, the game will also have a tool for creating custom charts, which will “feel really familiar and comfortable for people coming in from Beat Saber mapping”.

The game, at least in its state as of PAX West 2022, felt polished and responsive. The hit registration seemed on point -  I didn’t disagree with any of the judgments I received on any of my hits during my plays. The gameplay itself is also pretty fun - the lack of directional restrictions on hitting the enemies allows for a more relaxed style of play, where you can just vibe to the music.

Some avid rhythm game players will be particularly pleased to note that timing is factored into scoring. Others might still be put off by the fact that timing is only a small part of the scoring system, as swing strength and combo play a big part. There is also a built-in scroll speed option, but it counts as a game modifier, which will prevent scores from being counted on the leaderboards. At least it works as advertised and makes charts a lot nicer to play, as the default speed is a bit too slow for my liking.

One gripe I have with the game is the difficulty in telling what color the enemies are. You can only tell from the color of their eyes, which is really hard to notice when there are a bunch of them coming from different lanes and elevations.

Another gripe is that the corpses of enemies linger, which tends to clutter up the lower ⅓ to ¼ of my vision as they pile up. Even worse is when they get pushed backwards while standing up and end up completely obscuring vision of a lane. Perhaps an option to have enemies insta-poof when they get hit would be nice.

And lastly, the difficulty system is locked to four tiers, with no numerical identifier to more accurately gauge how difficult a song actually is. You can kind of gauge it by the note density (notes divided by length of the song), but low-density charts can still be harder than higher-density ones due to a lot of factors (long/difficult streams, wider swings, trickiness, etc.)

A lot of the game’s longevity is going to depend on the quantity and quality of the charts that they (and the community, once they release that feature) are going to push out. The charts that I played at PAX felt intuitive and flowed well. From a post on the Steam discussion board for the game, the developers mentioned having a popular Beat Saber custom mapper doing the charting for their core songs, which does inspire confidence in their quality. They have also announced that on launch, the game will have a mapping tool that should feel intuitive to use, especially if you’ve mapped for Beat Saber.

It will be interesting to see how the mapping progresses, considering how the scoring system works (in particular, the placement and frequency of the gold enemies and the resulting use of the rage mechanic), and how players are free to hit the notes however they want.

The graphics are honestly kind of cheesy, but in a charming way - rock/heavy metal aesthetics, but cartoony and kiddie-fied. As you raise your score and combo, the background will react - giant demonic fish men will air guitar, stone behemoths will headbang, magma demons will devilhorn with their hands and bob their heads, and dragons will… breathe fire.

The core gameplay is enjoyable for easier songs, but display issues (enemy eye color, lingering corpses) make dense streams of notes harder than they should actually be.

There is also an unfortunate lack of content, with there only being 5 songs, along with another 4 coming out when the game launches in a few days. More official songs are going to be added in the months following the release date, but the real deciding factor on whether this game takes off is going to be the custom mapping tool they release, and whether they can get a community of mappers pumping out quality charts.