Hey there everyone, Dimmet from GamePress here!

After a grueling drive through LA traffic, GamePress finally made it to Aniplex of America's office in Santa Monica, where all the magic happens! After a quick tour of the office and some photo ops, we sat down and got to business! 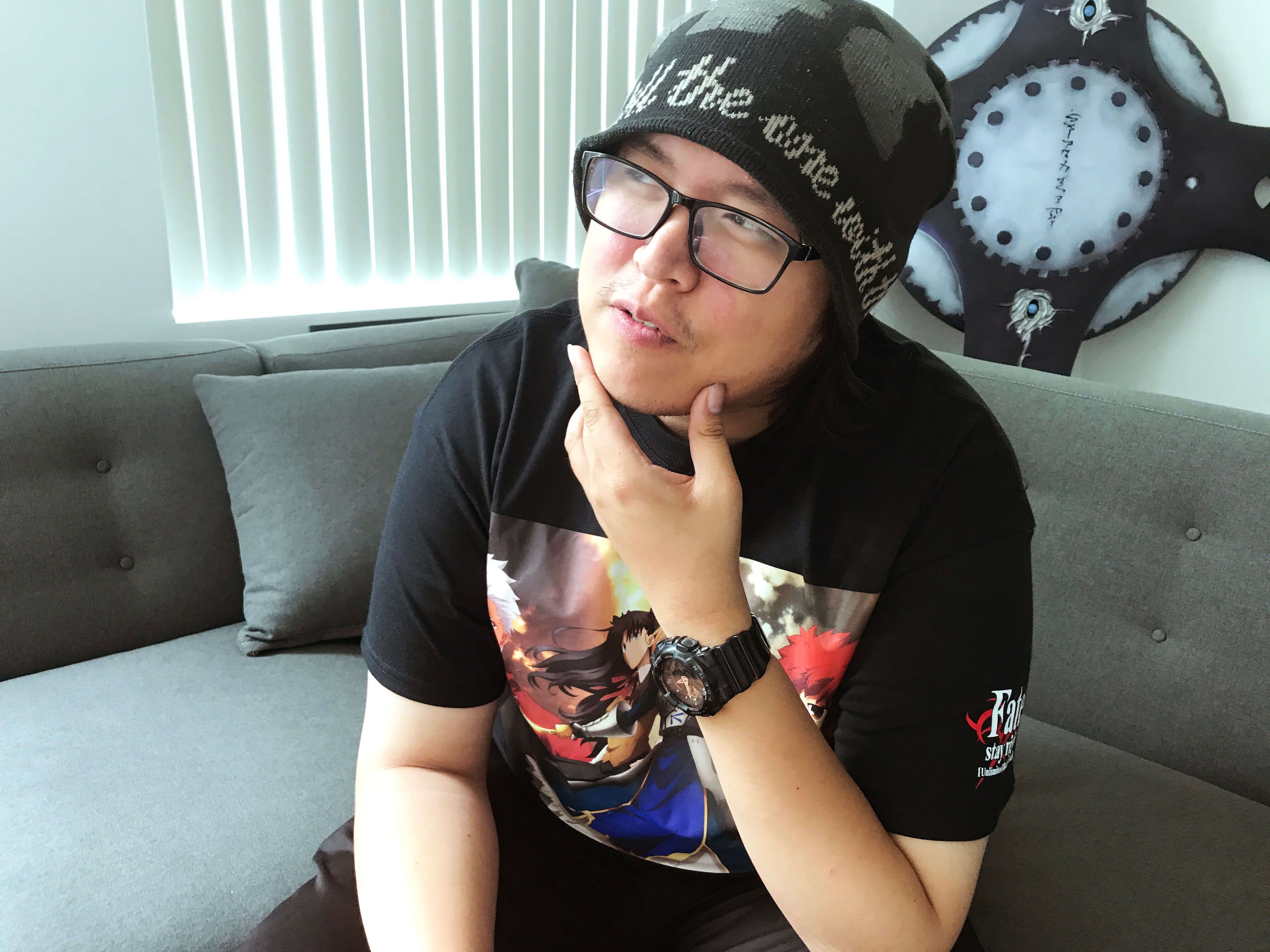 Justin: What are some challenges your team has faced when trying to appeal to a North American audience?

Albert: Well for us, one of the difficult parts is that for Asia, the whole TYPE-MOON franchise has already been around for a long time. It’s originally in the Japanese language and in turn, the Chinese language is a lot easier to relate to when localizing. Even if you don’t read the same language you can look at the kanji and make a good guess at what’s going on. Obviously, that’s not the case for English. It’s two completely different systems of language. We have some fans who have followed the franchise since the beginning before any official translations came out and a lot of TYPE-MOON material hasn’t even been localized in North America yet! So one of the biggest challenges we had to face was that because of that, all of the existing materials are sort of fan translated - and when it's fan translated we have varying sides or owners translating things differently. Some terms may have a universal agreement on how things should be, but let's just say - the biggest term that we all know that people fought over was Saber's name.

When Saber’s name came out, as you know the official material (in Fate/Grand Order) says Altria, where some people say Artoria. Even Mr. Takeuchi himself drew art that said Master Artoria, but some other franchises have translated it as Arturia as well. So that’s one of the major challenges for us - that is, how to unify the different translations together.

We’re mainly looking at localizing this game for the fans. We want players to have a comfortable environment where they’re playing in the language they fully understand. Truly understand the flavor of Fate, the lore of Fate - and to do that, we need to unify the translations and make sure anyone can understand what’s going on. And sometimes it can be tough for everyone to agree. So that’s the biggest challenge.

Another thing is that Fate, the writing of Fate, is very different. It varies from author to author, but it also takes the trend between the fandom into consideration. Like how even in the Japanese F/GO or Fate/Extra, they call Green Archer Ryokucha (緑茶), which translates to green tea. So it’s a question of how we carry that flavor over. And that’s also one of our biggest challenges. It’s not just the language itself, but how to overcome the difference in culture and make sure that the flavor still stays intact.

Justin: So like early in F/GO’s story with the whole thing about Marie Antoinette and her famous quote in the NA version.. 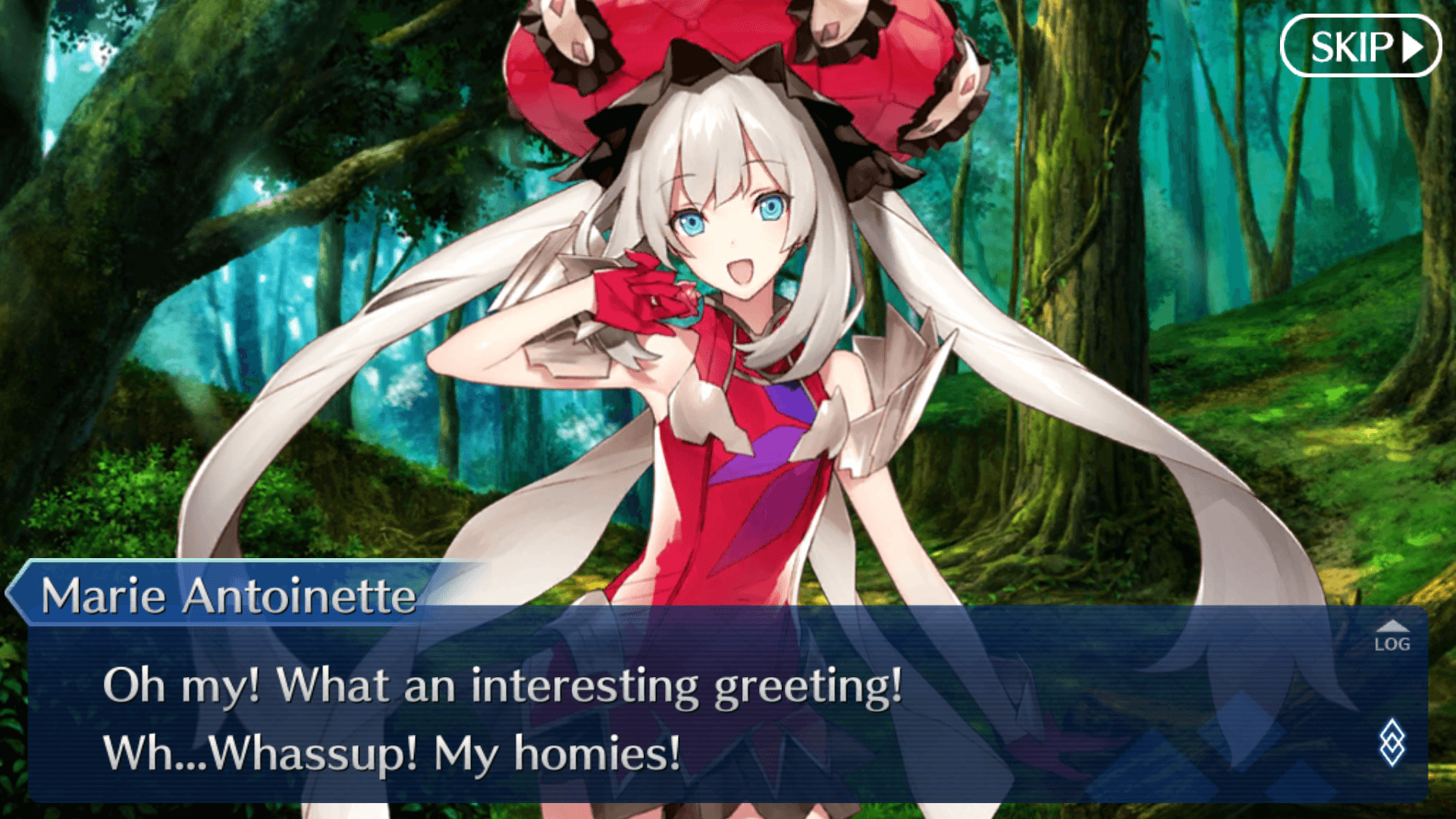 Justin: Yeah, and thinking back on it, everyone at first thought it was really weird... but it actually really fits her character.

Justin: The Moon Goddess event was a great example of that too. It’s been impressive how your team is accommodating for the North American culture. There’s a lot of time spent to communicate the characterization of all these different personalities and from what we’ve seen, it’s something a lot of the community really loves about the translation so far.

Justin: So of these hard challenges, are there any characters in particular that really stand out and are really hard to translate over?

Albert: Let’s see... well, I’d say Tamamo Cat and a lot of the Japanese-oriented characters. Everything they say and all their jokes are based on Japanese culture! So we look at that and just say, “Oh great, how are we going to carry this over!?” Because when you translate these forms of Japanese-oriented content we have to ask ourselves, “Do we leave this in Japanese and just spell it romanized? Or do we translate it?” Tamamo Cat’s NP name is so long!

And one of the biggest concerns is that we have to not only cater to our existing fan-base but also be there for any newcomers to the franchise. Even if they watch Fate and know Fate, if we leave something like that in Japanese and they don’t read any, they’ll be like, “Well, what the heck is this?” Right? And especially with some NPs, they have meanings that may be different. They’re derived from legends or a story the character is based off so we’ll have to make a decision where we’ll have to translate it into its own English meaning. So that can be fairly difficult. *laughs* Tamamo Cat, she... she doesn’t make sense! The nyan sounds, the woof sounds - cause she’s a fox... that acts like a cat with a woof at the end of her sentences! Her character is all over and then it’s also based on a culture in Japan - a maid cafe costume! So some of these things are what’s really challenging for us.

Justin: So in that case, is there any particular character or event that really comes to mind, that you’ve found to be most enjoyable to work on?

Albert: Well, the story and character profiles are very, very enjoyable because that itself is really what Fate is all about. We’re all looking into the characters, their backgrounds and how it all ties into the story surrounding it! You know, while I was reading it in Japanese, there’s a lot of... emotion. (Spoilers from France Singularity!)

For example, in France, Marie had to do certain things. There’s the part where she has to sacrifice herself and when I was translating that, I was crying! I was like, “Oh this is very touching... how do we get her feelings across?” When she sacrifices herself, there’s a lot going through her mind. She wants to express her love and make sure that Jeanne Alter gets that.

So to think of ways to put these stories together and get them into the context that North American audiences can understand, that’s always the fun part.

And even with Moon Goddess, we have a LOT of fun writing that. We go crazy on that one! It’s supposed to be a fun event, so let’s go! LEGEND OF SAMURAI, the One-Star Servant, “Whassup! My homies!” - we decided to leave it all in there to deliver that flavor, and we had a lot of fun doing it! And that’s what I really enjoy most about working on F/GO. We’re making sure that the people who never got in touch with the Fate series can really enjoy the story, can cry and laugh while reading it. It’s not just another mindless mobile game where you’re just tapping the screen a bunch! We want it to be a really connective and immersive experience.

Justin: Your team had a presence at Otakon recently and a panel too. That’s where you announced the Moon Goddess event! How did that go?

Albert: For that, I personally wasn’t there. But from what I heard a lot of people came up asking questions and were really excited that the Moon Goddess event was coming! It was a two week wait between Nero Fest and Moon Goddess, so people were happy to see something!

Lostbelt No.4: Saṃsāra of Genesis and Terminus, Yugakshetra - The Final Dark God

Happy Belated Father’s Day Thread! Shout out to the FGO dads
(topic withdrawn by author, will be automatically deleted in 24 hours unless flagged) …
Busti's Stall Diary Chapter #301: The Only Mercy From RNGesus On This Poor Soul
IS SENDING ALONG A DOCTOR TO TREAT ALL THE SALT AND RESULTING STINGS image983×1200…
Which of these CEs would be better for Okita Alter?
FYI 2nd & 3rd are not fully leveled yet. All 3 have a max level of 40 right now…
Busti's Stall Diary Chapter #300: THIS...IS...THE STALL DIARY!
I was short on time and stuff, so sorry for not being very creative! But this is the…
Mori Nagayoshi General Discussion (Redux)
Mori Nagayoshi | Fate Grand Order Wiki - GamePress GP official review for him. We have…
Read More