If you don't want your Support on the starting lineup, move it to the back by clicking the lineup button on bottom left: 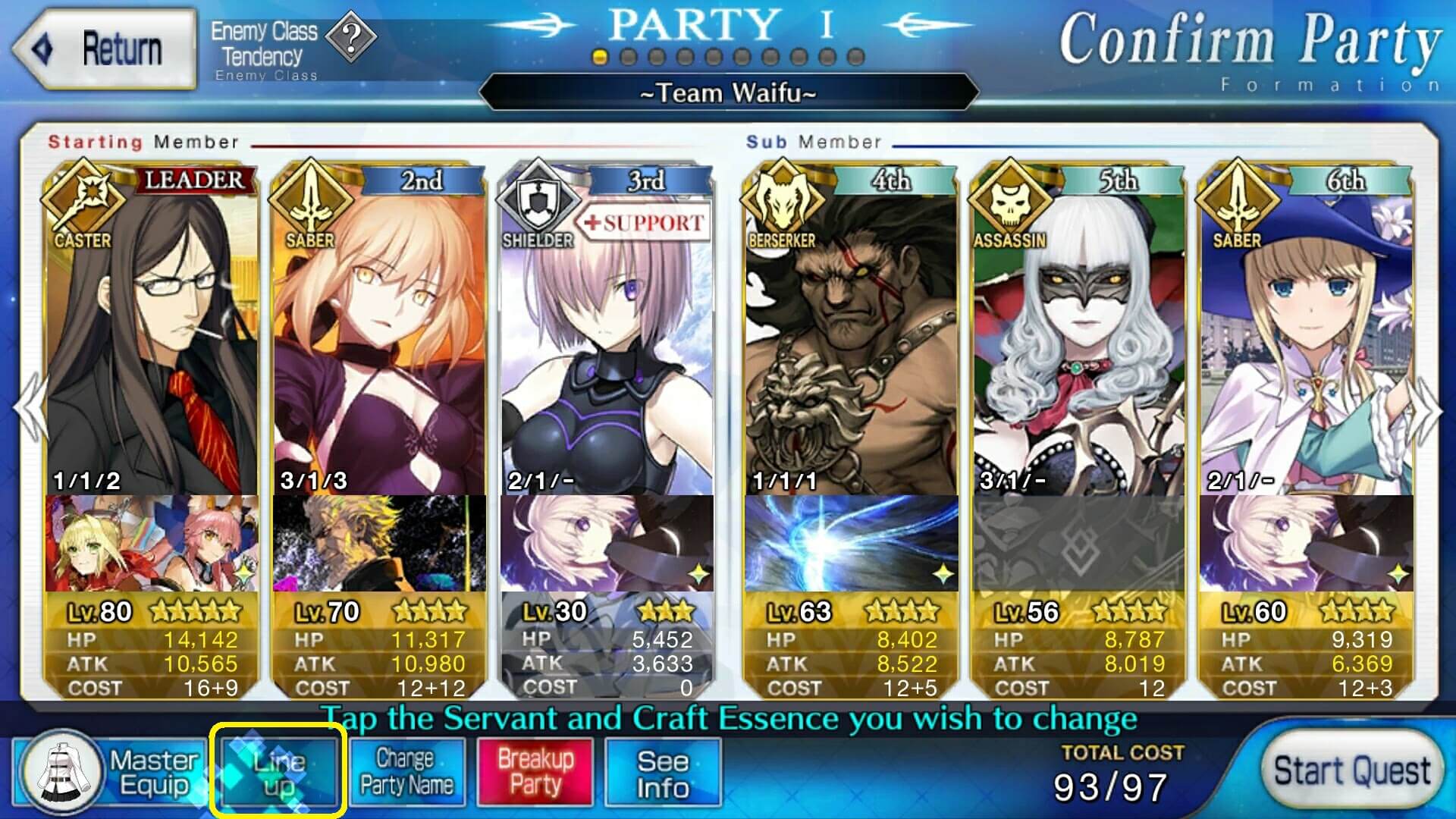 Noble Phantasms can be used to form same-type chains. However, a Noble Phantasm is only considered to be ‘used’ when it is actually fired, instead of when it is put in a chain. As such, if the NP is selected to form a same-type chain but is not fired, the NP gauge will not be consumed. This phenomenon usually occurs when the target is the last opponent in a wave. Assuming the first two hits would kill the target, putting the NP card last allows for a same-type chain to be made without consuming the NP.

Players may manually change their attack target before entering the Command Card selection screen, and even in the screen as long a they have no command cards picked yet.

To change targets mid-battle, either:

In all cases, the next Command Cards will automatically target the next opponent. To kill an opponent who has activated Guts in one go, it is necessary to do the mid-battle switching, else your Command Cards would overkill the opponent and their Guts will only activate afterward. 2) and 3) are particularly important things to keep in mind when performing brave chains.

Overkilling occurs when a Command Card with multiple hits kills an opponent while not all hits have been performed, or when the player does not do mid-battle switching. As a result, the remaining hits to that target gain a 2x increase to both NP gain and critical star gain.

Generally speaking, opponents will automatically target a different player unit if one of their hits would kill the first target. However, if they have no more viable targets, the opponent will simply stop their turn. There are two ways to make use of this mechanic; the first is in last-stand scenarios using the Guts buff, and the other uses Taunt.

In the Guts scenario; the unit would be the last one standing, and as such, is the only available target. When their HP drops to zero, for a short period between the killing blow and Guts proccing, the opponents have no available target. As such, they will skip the rest of their offensive moves. (NOTE: This does not work outside of last-stand situations as the opponents would then still have valid targets)

The second way forces the enemies to only be able to target a single unit - the Taunter. As such, when the unit dies, the opponents lose their only target, and will thus skip the rest of their single-target offensive moves (NOTE: The opponents will still use moves targeting themselves, or Area-of-Effect ones)

Most importantly, opponents who get their NP move canceled by this mechanic would still consume their NP gauge.