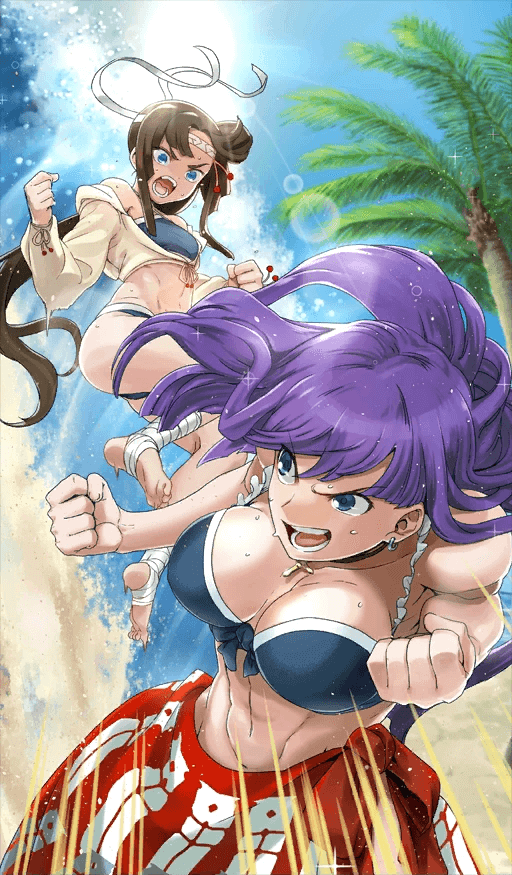 The fact that we've been summoned as Servants means that we all strive to become the strongest!

At the tropical beach, a bare-knuckle fighting tournament is set to begin!

Though Martha had no intention of participating, she had no choice but to do so in order to reclaim her stolen Holy Knuckles.

"Bring it on! I'll have every single one of you repent!"

Ushiwaka the jumping swallow, the Mutou-dori Yagyu, and king fist Beowulf... After defeating many powerful opponents, her final adversary, Sasaki Kojirou of Ganryu, appears before her!

"Gentleness is key to counter torrents, I see."

With all her moves blocked or countered, Martha was cornered. Then, as her last-ditch effort, she unleashes a secret move that she developed during her youth that she swore never to use...!

Unfortunately, that was all they had time to do, so the book simply ends there...

Busti's Stall Diary Chapter #542: A Thread of Culture
Enjoy an assortment of GBF memes And this cause it’s cute 5 posts - 4…
Do yo interludes, fool! They come with a drunken Oni to boot :fgo_shutenwink: - Interlude 14 Rolling Thread
Yep, you already know the drill. After an extensive and exhausting event, a dead week…
New 90++ difficulty makes its move to farming
These debuted with Super Memorial Quests which were as Kanou said content aimed at the…
Up to Summer 7 AOE Looping spreadsheet discussion
All right. So instead of clogging up S.Ibuki’s thread about the current potential of…
Interlude Campaign pt. 14: Horns, fluffy ears, rocks, and nuggets
Are we going to get Scathachfest early if these come in mid-August instead of mid…
Read More