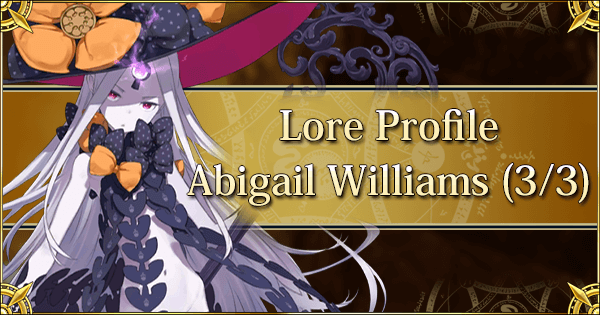 Ok, let’s not beat about the bush. She’s a frickin’ host to an Outer God. We can probably be sure, with at least 70% confidence, that the historical Abigail did not have Yog-Sothoth living in a hole in her forehead. That we know of, at least. Maybe Nasu knows something we don’t, I dunno. Obviously the events of the Salem singularity have distorted Abigail into a burgeoning eldritch horror. Metaphorically and literally, she serves as the ‘Key’, setting up the basis for the entire metaphor of the events of Salem as the ‘doorway’ for Sut-Typhon and the Outer Gods to ‘save’ humanity, following in the footsteps of Goetia. This is almost explicitly laid out in her Servant profile:

In the end, witches were found in Salem, and the door of the horrifying Witch Trials opened. A great turmoil that became the "keyhole". The young girl that reflects the desires of the masses as the "key".

Abigail’s Noble Phantasm is Qliphoth Rhizome: Hollow Tree Filled by [a Remnant]/[Husks] of Light. Note that it should normally be an Anti-World Noble Phantasm due to the ability of the Outer Gods’ gate to propagate endlessly and essentially vaporize the entirety of humanity, since humans are incompatible with the bizarre universe of the Outer Gods contained within the gate. However, because the consciousness of Abigail, the Silver Key, is being overwritten and restrained by Sut-Typhon in order to access Qliphoth Rhizome, it is instead designated as an Anti-Unit Noble Phantasm with her as the target unit. When used, it forcibly pulls the consciousness of the victim through the dimensional gate in Abigail’s forehead, where anything human simply cannot exist in such a horribly foreign space. Thus, the animation (as shown in the video on the previous page) is misleading - the tentacles grabbing at the target are merely visions the target experiences mentally as they cease to exist, and therefore when the NP animation zooms out of the keyhole again, there is demonstrably no target left. By the time they have been targeted, the fate of anything ‘human’ has already been sealed without a single avenue of recourse. Hence the NP’s ability to remove all enemy buffs, bypassing all forms of defense.

The origin of Qliphoth Rhizome comes from the Qliphoth, or Kelipot, of Jewish Kabbalah cosmology, which sometimes intersects with demonology. The Qliphothic Tree is the metaphorical tree of impurity and evil, which stands in direct opposition to the holy tree of the Sefirot/Sephirot (yes, this is where Sephiroth got his name) and contains 10 metaphorical, impure ‘shells’ that serve as spiritual obstacles for one who seeks the purity of God. A rhizome is a botanical term referring to a plant stem which has begun to grow and expand roots and shoots outwards as well as upwards, propagating laterally far more than plants ordinarily would. Thus, Qliphoth Rhizome - the hollow tree of evil, which threatens to spread over all existence. This is one of the most terrifying Noble Phantasms in Fate lore, but thankfully it is never able to reach its full potential in any observed story material thanks to the events of the Salem singularity.

Last but not least, Abigail’s status as the Key in general, and the Silver Key specifically, including her Bond 10 Craft Essence, is a whole reference to H.P. Lovecraft’s The Silver Key, which features his recurring character Randolph Carter (who shows up, albeit not named as such, in Salem). The object of the same name is an artifact of some unknown eldritch nature, which serves as the ‘key to the gate of dreams’. Randolph refers to Abigail’s nature as the Silver Key after being connected to Sut-Typhon as what allows her to survive the collapsing of the Salem Singularity and continue wandering the cosmos.

Many thanks to redditor /u/roadromancer for translating Abigail’s Servant Profile from FGO Material VI!

Which NA Summer Event Was Your Favorite?
I know Summer 3 isn’t over yet, but most everyone should have finished the main quests…
Pseudo-Singularity help
Wazzup I’m kinda in a bad mood the whale I was leaning on unfriended me so here I am…
Who are the best st servants of each class?
Who are the best single target servants of each class in terms of soloing and self…
Happy Feriae Augusti, FGO Gamepress Community!
Today, here in Italy is a day to celebrate: The name of the Holliday of Ferragosto…
Burning Summer 2 CEs?
So with the Summer 2 Dead Heat Race rerun over, is it worth keeping any of the event…
Read More