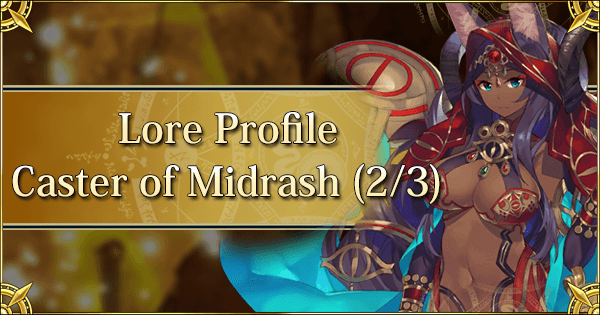 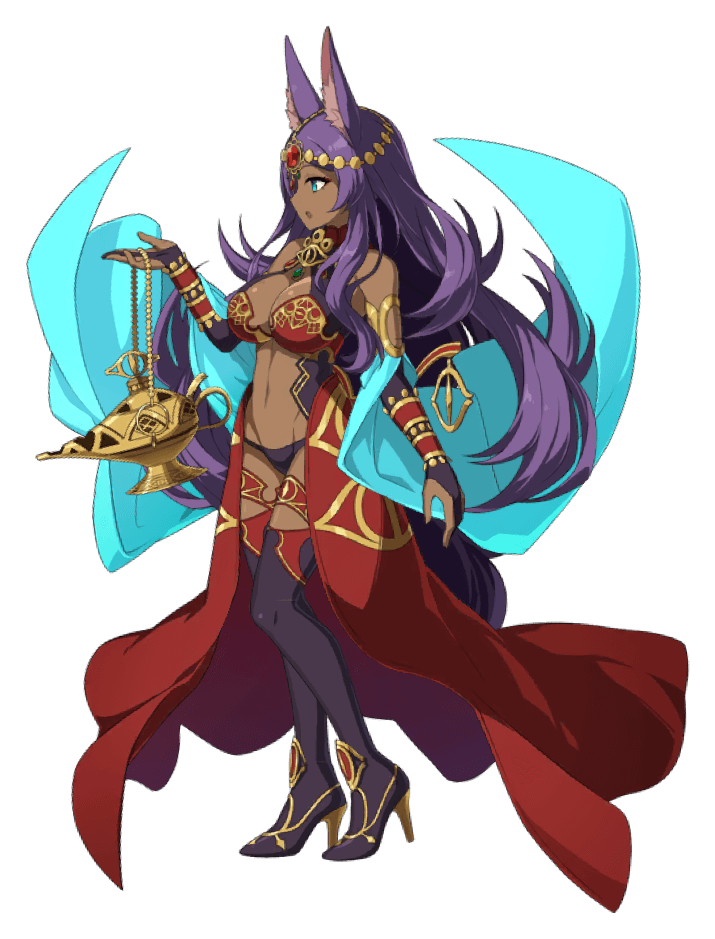 The first and most obvious thing one might see about Sheba is her revealing, vaguely Arabian-themed clothing, followed by the fact that she has furry ears and a tail. Right away, it’s obvious that the design leaned heavily into the jinn theory (in Salem she’s confirmed as being half-jinn in the Nasuverse). Jinn are often depicted as taking the form of animals, with dogs especially being associated with them. She even has an incense burner that looks exactly like the stereotypical genie’s lamp in her battle sprite! (‘Genie’ is in fact simply the anglicized form of ‘jinn’, by the way). Last note about the jinn aspect: jinns are frequently depicted amidst sandstorms and whirlwinds, and often considered related to wind, having wind-based powers, etc. (On a slight tangent, this is the lore basis for Hassan of the Cursed Arm possessing Protection from Wind - it was for safety from jinns when he was alive.) The majority of Sheba’s combat animations revolve around her manipulating wind and the smoke from her incense burner. Her dark skin comes naturally from being a South Arabian queen; the Queen of Sheba is famously suggested to be the bride who said ‘I am black and beautiful’ in a passage in Song of Songs 1:5. When she acts as Tituba during the Salem singularity, her ears and tail are hidden.

Personality-wise, Sheba is noticeably obsessed with money. Literally the first thing she does upon being summoned is introduce herself and then note that she charges extra money if people want to know her real name. Fittingly for one who was known as the ruler of an extravagantly wealthy land, she constantly brings up making money at any given opportunity. A good half of her lines revolve around it; even one of her death quotes is just whining that her balance of accounts is mismatched. Her interlude even revolves around an ill-fated attempt at a get-rich-quick scheme in conjunction with Kid Gil, which predictably goes wrong. Sheba even gets along with Ishtar because they both love to talk about money and gems and such.

… But in the end, how much of that is real? In the end, given her jinn powers of clairvoyance and mysterious nature, even her official material profile directly questions whether she might be putting on a front. That said, Sheba’s love of money is still real. It just isn’t the only thing she values like it might first appear; her Bond 5 line has her ask you a riddle about something that is beyond the ability of money to replace. The answer is the time that she spends with you; the connection built between two hearts and strengthened with care is not something anyone can take, a treasure beyond treasures. Thus, she still has a (well-hidden) softer and caring side behind her playfulness and money obsession.

See her wind-based abilities and jinn nature at work in her combat animations:

Neither is the Queen of Sheba someone who was famous for martial prowess, nor were jinns particularly well known for physical combat. Thus the flagging STR and AGI stats. Conversely, as someone blessed to rule a thriving kingdom and possessing Clairvoyance, of course she enjoys supreme good fortune, earning her A-Rank LUK. Her C-Rank END reflects her ability to take a beating slightly better than dishing one out physically, but her true powerhouse stat is MP. As a half-jinn who lived in the Age of Gods, is capable of magecraft and illusions, and possesses powerful servants, of course Sheba’s magical might is of the highest caliber. Her B-Rank NP stat directly carries over from her B-Rank NP Three Enigmas without any modification.

Regarding alignment: as one who was considered a benevolent and wise ruler, acclaimed through the land and not recorded negatively for any reason, Sheba is naturally Good. Likely, her zealous attachment to the rules of trade and fair bargaining prevents her from being Chaotic, but the mysterious nature of her varied legends and her greed and avarice likewise rule out Lawful. Thus, Neutral Good.

Her Personal Skills are:

Eyes of the Spirits: A

Perhaps based on her own spiritual background or perhaps using the eyes of her servant jinn, nothing will escape her keen eye. Preventing dirty dealings in trade and catching out suspicious behavior in combat; neither is beyond her ability.

Wisdom of the Demon God: A

Thanks to her magical jinn bloodline, she obtained the sagacity and cleverness that allowed her to be worthy of trading wits with the King of Magic, Solomon, who was given wisdom by God.

Charisma enough to rule a nation. The Queen of Sheba was the illustrious ruler of a thriving land of plenty. She gains a negative modifier not because of lack of ability, but because, fundamentally, she is one for whom the ‘mindset of a ruler’ is not the default, and she needs to consciously regulate herself. A genius queen, but not a natural one.

Next Page - Comparison and References

Is there any difference with device transfers involving Bluestacks?
When doing an official device transfer from a PC with Bluestacks to an Android device…
Busti’s Stall Diary Chapter #537: The Chaldea Recruitment Office
In Chaldea - The Dapper People Where can you find pleasure, search for grails and…
Upcoming Himiko vs Douman! Who are you rolling for? One servant to unload on
As the title states. Who are you rolling for? Yes, I know they are completely…
Fate Grand Order Materials Full Translation Compilation
Here’s the link of all the character materials (and others like bosses and such) that…
What You Can Expect to Get on FGO 7th Anniversary
There is no useless servants only useless master. Chaldean masters, please raise and…
Read More