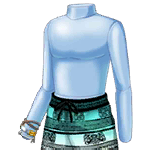 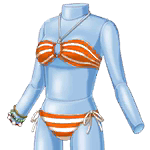 A beach event needs some brilliantly suitable attire. The second Quick-focused Mystic Code to be released, this Mystic Code provides a mix of offensive, defensive and utility options. Although this versatility, and the Quick focus, aren't really that useful in practice until the release of Skadi.

There are very few situation in which a party-wide Quick buff would be more preferable to a single Quick buff while the NP Gauge Boost is simply too minor to have a profound effect on performance. The Piece Invincibility can be useful however, but often more elegant solutions are available to circumvent or deal with enemy damage immunity.

The use of this Mystic Code is similar to the Royal Brand - Quick Servants or Servants with Quick NPs benefit most, such as Jack the Ripper, Okita-Souji or Lancelot. Generally other Mystic Codes can provide stronger or more broadly applicable damage buffs however. To fully extract all value from Rumble Party requires the use of multiple NPs from the whole party. Sadly, this tends to yield less sustained damage and isn't usually worth it. Even the NP gauge boost is too minor to truly be of much use in extended fights - but can have some use in 3-turn setups when farming.

This Mystic Code levels fast enough, but each level adds relatively little with mostly the effect of the healing seeing significant increases in value. The cooldown of each skill is generally too long for repeated use and the NP gauge increase remains a static 10% at every level. Masters could wait with leveling it until they have some suitable Quick teams to use with it (or a good Quick Support).