At long last, we have Kirei. Kirei is a really good AoE Arts unit, with all the usual bells and whistles on top of a truly ridiculous defensive skill. He’s a very good unit who competes well with the likes of Spish and Summer Kama provided he’s swinging against cavalry. There are two main drawbacks to Kirei, though: as an Alter Ego, he only works against about half the cast, and he’s competing with Ibuki, who still completely invalidates him outside of extremely niche situations. All-in-all, though, existing in the realm of formerly-top-tier Servants isn’t a bad place to land, and his third skill is silly enough to almost be worth it all on its own. 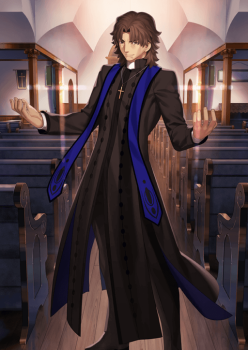 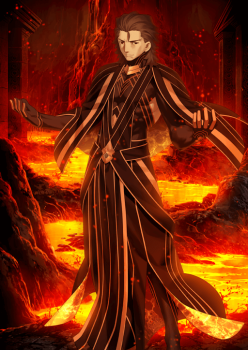 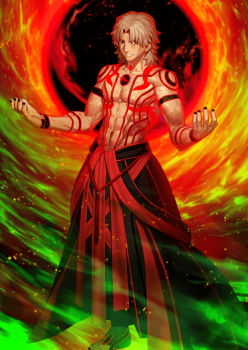 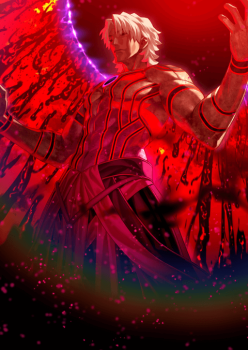 Increase your Mental Debuff Resist by 30%.

Grants self immunity to Poison.

Kirei has a defense-oriented stat spread, with the lowest attack and highest defense of the SSR Alter Egos. This isn’t a great starting point for a DPS, sadly. His internals are similarly iffy, with low-average NP gain on his Arts and Quick cards. His star gen is pretty good for an AoE DPS, at least, with high hit-counts across-the-board and two Quick cards to work with.

Kirei has a nice mix of passives to partially offset his weak bases. Territory Creation is a permanent buff to Kirei’s most important cards, and Executor provides a small boost to both crit damage and crit consistency. Baptism Sacrament is a bit iffy as passives go—staving off mental debuffs is good, but this being only 30% is a bit weird for it only applying to a small subset of debuffs. Poison Resistance (Confidental) is similarly niche, only really mattering when you happen to be fighting a gimmick boss who spams poison, or something of that nature.

As an Alter Ego, Kirei needs fewer standard mats than most Servants, taking two full sets of gems instead. If you have plenty of Rider and Caster gems, this is a good thing… but Caster gems are often at a premium, which makes this a bit less good of a tradeoff than it might otherwise be.

Protection of the Faith (Unique) A+

As far as standard steroids go, Protection of the Faith is about as good as it gets (outside of things like Anti-Evil). It’s a 30% attack buff on a 4-turn cooldown, which means it has near-perfect uptime. It also has some nice utility, healing an ally and removing their debuffs. The heal exactly offsets the demerit on Kirei’s second skill, which is nice, and removing debuffs can be handy for ensuring Kirei isn’t stymied by NP seal and damage debuffs. This is more useful, though, for supports, with the potential to keep Castoria alive or to remove a stun at a key moment in a CQ. Unfortunately, the utility use case and the offensive use case for this skill conflict a bit, forcing a utility-damage trade… but that’s not terrible considering the short cooldown.

Malicious Feasts is Kirei’s 50% battery. 30% of it is purely selfish, and the other 20% applies to all evil allies (including Kirei himself). The party charge isn’t a huge deal given Kirei’s primary use as a damage-dealer, but it does apply to Tamamo and Oberon, which can be handy in Tamamo/Kirei/Castoria teams, or for certain Oberon farming setups. The skill also gives an Arts buff to all Evil allies, which usually just matters for Kirei himself. There’s a small HP demerit on this skill, too, but that’s mostly irrelevant because…

Undying Bahloo is ridiculous. This skill is a three-turn taunt, which would be powerful on its own, but it pairs that with Shenanigans. Specifically, Kirei gets a one-time stackable guts, and a three-turn chance-based guts to go with it. That’s not “one-time, three-turn” on the second guts. It’s just straight-up three turns. It has an 80% chance per proc of working at max level, which, especially with the guaranteed guts popping first, means Kirei is highly likely to survive all three turns he’s taunting through. This skill means Kirei is simultaneously an excellent tank and a pretty effective damage-dealer in CQs.

Dark Heart Which Erupts into a Flood

Kirei’s NP is really busy for how simple it is. At its core, it’s an AoE Arts NP with a pre-cast damage buff. Sadly, the buff is only one turn, which means Kirei doesn’t have any ramp unless you count his guts shenanigans. In exchange for the lack of ramp, he gives a decently powerful burn and curse status for a tiny bit of extra effective damage, and he gets supereffective niche against Evil enemies—helpful for farming and CQs in some instances. The NP also comes with a small flavor IK chance against Good enemies. All-in-all, it’s a pretty standard AoE Arts NP with all the things you want it to have, aside from ramp.

Kirei’s loop specs are such that a Castoria/Castoria/Oberon team lets him loop CE-less provided there are at least four enemies spread across the first two waves. That is to say, 1/3/x, 3/1/x, and 2/2/x nodes are all doable provided he has the damage. Plugless looping, though, requires starting NP charge CEs. All the usual caveats and breakdowns for this kind of thing apply—if you don’t have Mana Loading and replace Oberon with a 50% charger, Kirei is locked to 3/3/x nodes, and each of Oberon and Mana Loading makes up for a “missing” enemy. The breakdown here is largely the same as the many many other Servants of this type we’ve had, so if you want more detail, you can check out their reviews. Lancer Ryouma and Ruler Moriarty both have fairly in-depth breakdowns that apply more-or-less directly here as well.

Kirei’s CQ usage is a bit more interesting. Most of the nuance involved in using Kirei in CQs has to do with how you time his third skill. It interacts somewhat interestingly with Castoria’s Arts buff, in that Castoria’s Arts buff comes with an invuln, which protects Kirei while he’s taunting but also means he doesn’t get to proc his guts damage increases. In a double Castoria team, you might consider waiting until turn 2 to use Kirei’s guts skill so he maximizes the time spent eating damage and can potentially stack more NP damage buffs.

In a Tamamo/Castoria team, though, Tamamo’s cooldown reduction lets you use Kirei’s guts more freely. You can alternate Kirei’s guts with protection from Castoria’s NP to reliably keep the whole team alive (at least, until Kirei’s guts fails), stacking NP damage increases as you do. This is a pretty nice balance between fastplay and stall, as your defensive options feed back into your offense.

In less-optimal teams, you still want to grab Castoria off your support list unless you are prohibited from doing so. Lanling is a solid secondary support for Kirei if you have him—his star gen buff pairs nicely with Kirei's high hit-counts. Standbys like Mozart, Xu Fu, and Hans also work well. Xu Fu in particular lets Kirei NP immediately with a 50% charge CE, which with something like Painting Summer puts Kirei in range of tri-looping 3/3/3 fights even with just a single Castoria. Nice!

The Black Grail is even better for Kirei than for most AoE Arts Servants, as it can trigger extra procs of his guts for additional NP damage buffs. You just need to be sure you can heal Kirei again once his guts runs out. Fortunately, Kirei can do this himself to a degree, though you’ll be more comfortable doing this in a team with Tamamo or Lady Avalon.

Kirei has no in-kit crit damage buffs aside from his passive, so he gets a decent amount out of crit damage CCs… though his cards aren’t great in general, so the benefit is still marginal. Burn and curse CCs can also be an interesting choice here, since Kirei’s NP amplifies them.

Kirei is one of the best AoE Arts units in the game, but HP thresholds have increased to the point where proper counterclassing with niche damage is often required to hit things hard enough—at least, with AoE Servants—and Ibuki is pretty strictly better for non-counterclassing purposes. Kirei is a good grail target if you think you’ll use him for CQs specifically, since he does unique stuff there, but for farming, I’d pass.

Kirei is a genuinely great Servant in a vacuum. He has good damage against about half the cast, and very good damage against a subset of that half. He has all the basic Arts tools, plus some fantastic CQ utility. There’s a lot to like here. Unfortunately, Kirei is stuck in an iffy class, has low attack, and is in an environment where Extra class Arts AoEs are a slightly questionable proposition due to how much HP thresholds have risen. And on top of that, Ibuki exists. Altogether, this leaves Kirei as both a very good unit and probably one to skip. Unless you specifically want him for guts antics, you can replicate his value more effectively elsewhere, with full counterclass options or with Ibuki. 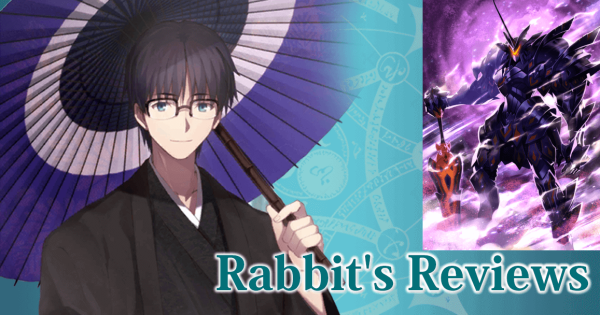 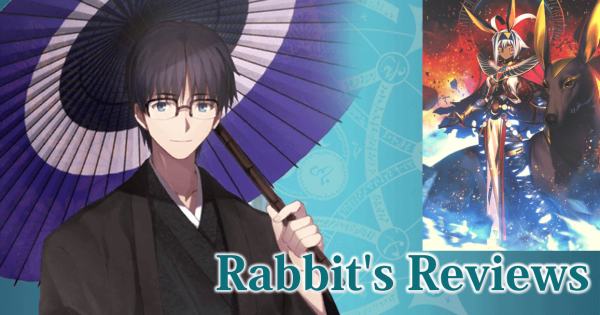