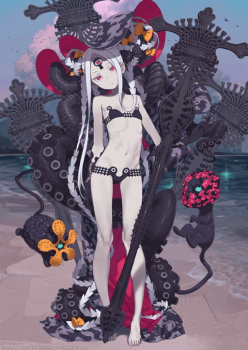 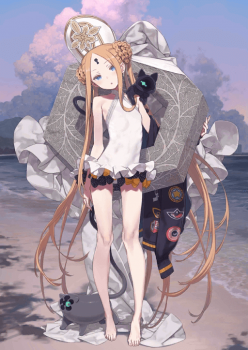 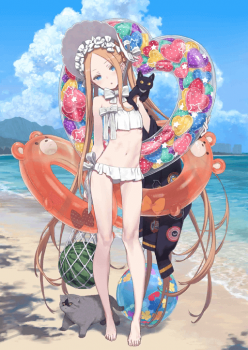 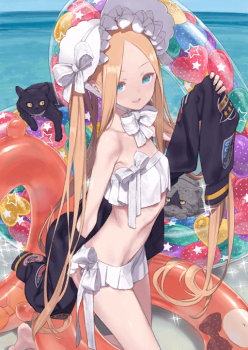 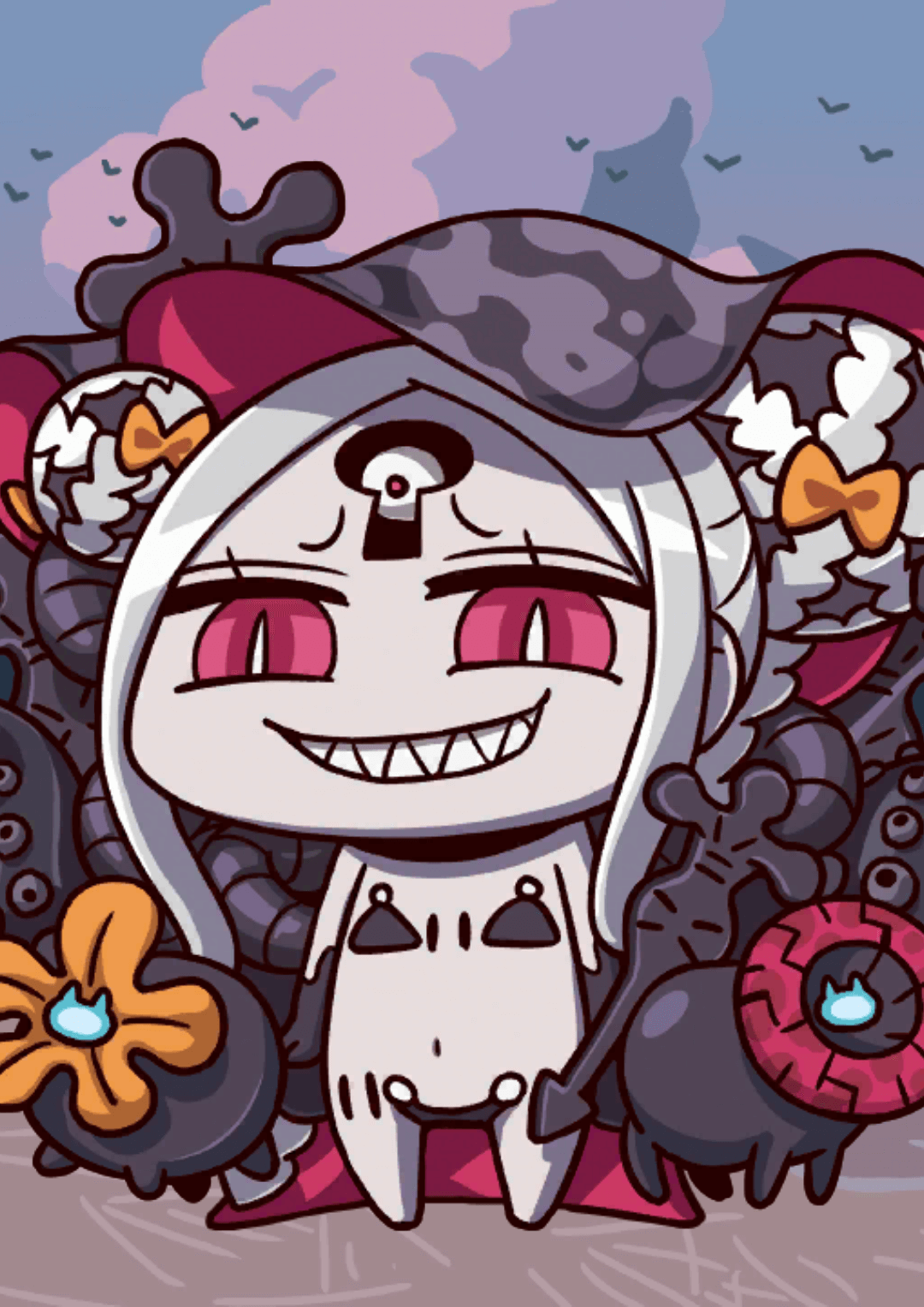 The Rose's Slumber B

Inflict Sleep on a single enemy (2 turns) [Sleep is removed when sleeping target is attacked].
Remove buffs from a single enemy.
Decrease DEF while Sleep is active (1 time, 2 turns).

Those Who Guide A

Increase your Buster Card effectiveness by 9%.

Remove defensive buffs from all enemies [Activates first].
Deal damage to all enemies.

When equipped on Abigail Williams (Summer),
Increase own NP Damage by 30% and Grant Debuff Immunity (3 times) to self.

“Before you know that will disappear too, and in this completely dark world, only the feeling of intertwined fingers will remain.”

Back from the beyond, Abigail has descended to strike terror in those who oppose her (literally). As an AoE Buster Foreigner Servant she primarily serves as an anti-defense attacker, especially against Berserker Types.

Abi’s primary focus is on decreasing and enemy’s Defenses, through use of The Rose’s Slumber B, Mass Hysteria B+, and her Noble Phantasm, Dreamlands A. That’s not the only way she can disable enemies either with a guaranteed 2-turn stun on The Rose’s Slumber to one target which breaks on damage, and a chance-based one on all enemies with Mass Hysteria. She also has quick access to her Noble Phantasm thanks to a strong charge on Those Who Guide A.

That said, she is going to struggle against most waves of enemies. She lacks any defenses of her own, meaning she’ll be relying on her stuns to stay alive. These stuns are also hard to keep up and rely on. Her damage is also rather poor even again Berserkers.

Masters would situationally use Abi in battles with two large HP enemies in order to stall out one of the two threats for two turns with a sleep, and attack the other one. But most people know the true reason people summon Abi… her black cat!

It will be impossible for enemies to put up defenses against Abi. Beyond her Noble Phantasm clearing all and any defensive debuffs (including Anti-Enforcement Defense) before damage, she can essentially lower a single enemy’s defense up to a whopping 70%! This gives her potential support abilities with other single target allies who could use the extra damage boost. Keep in mind that 50% of this defense destruction comes from her first skill’s sleep, so it will break as soon as that enemy takes damage.

Abi has two tools to disable enemies. One is a chance based stun on Mass Hysteria which has about a 50/50 chance to stun any enemy over 3-turns. The second is her sleep of The Rose’s Slumber which is guaranteed to work (against non-immune Servants) and could in theory keep an enemy stunned for 2-turns. With careful and lucky usage, she could allow a party to recover and fight another day.

Thanks to her third skill, Abi can instantly pop a 50% battery whenever she wishes. This is especially helpful as her NP gain isn’t the best with only one Arts card and a Buster Noble Phantasm.

Despite being able to attack enemy defenses, Abi has none of her own. She will take all enemy damage without a hard evasion, defense boost, or ability to lower the enemy’s attack. She does have a high HP to make up for it, and most all incoming damage is going to be neutral due to her Foreigner classing, but she’ll likely not live through an enemy Noble Phantasm.

While Abi’s stuns are great in theory, in practice they are often worthless. Her kit is oriented around Single Target attacks, yet her first skill breaks on damage. So against single-enemy bosses if she uses this skill, it’d break right after anyone attacked. Her other stun is entirely chance-based and unreliable.

Abi’s kit relies on Defense reduction but offers her nothing in the way of attack boosts besides a Buster Resistance down on an enemy. Her damage is easily outclassed by most AoE Servants in the game for a much smaller cost against Berserkers, leaving her only real attack advantage as one against a wave of Foreigners. These are exceedingly rare. Further, Defense will only affect the current wave, so her damage will be severely neutered if used in multiple waves.

Abi’s skills are all about disabling and debuffing Defenses, with most leveling being about increasing the Defense Down attribute. Masters typically will use her second skill at the start of the boss battle, her first on the turn they wish to unleash damage, and her third on the turn they wish to use Abi’s Noble Phantasm. All skills except the third are situational at best and can be left at level 6 or so, while her third should go to max.

Abi is a standard damage dealer as far as Craft Essences are concerned, so she uses the standard recommendations. Without supports, she is best with a Mixed Damage / Starting NP Gauge CE as she has instant access to a 50% charge with her third skill. With supports, she can boost her own damage with a NP Damage Up CE. Or one could go for a quicker Noble Phantasm with a Starting NP Gauge CE.

Dreams reflect truth.
They hatch from the cradle of reality, becoming a cage that in turn embraces and nurtures that reality...
I am a fantasy, the adept at its boundary... A servant of Father, my God...

In the late seventeenth century, when Massachusetts was under British rule, the then-twelve-year-old Puritan girl named Abigail Williams became a central figure in the gruesome Salem Witch Trials, in which numerous villagers were accused of witchcraft and lost their lives at the gallows.

When Abigail was summoned as a Servant, various factors intervened, and she successfully made a connection with an evil god whose existence has yet to be proven in this universe: the All-in-One and One-in-All. And so, as a faithful vessel of the outer god and calling herself the "Gate of Dreams," the girl is a Foreigner possessing strong powers.

And yet, one of the humble wishes the young girl has is to spend a quiet and peaceful summer vacation alone with Master...

"Isn't that how it goes? I'm on vacation, so I can't help it if my desires I've been keeping inside come pouring out..."

In the Land of Dreams Far, Far Away.
The world that surrounds the target is seamlessly transformed, and the target is invited into a dream world without being aware they ever crossed the threshold. There, they bear witness to the stark reality of the true world hidden behind everyday life and eventually lose the will to fight, even finding it difficult to maintain their ego.

The Rose's Slumber: B
A deep sleep that leads one to the divine depths of the land of dreams. The fragrant roses and waves of intense heat release the target's mind from its physical being.

Mass Hysteria: B+
The impulse to madness and liberation that works on the defenseless mental state of those in dream. But that doesn't mean it's always a bad thing, as it can also be an opportunity to discover one's true self.

Those Who Guide: A
A servant of the otherworldly God who guards the ultimate gate. When one bearing the silver key arrives at the gate, she offers them their final trial.

While they essentially have the same Spirit Origin and characteristics, their personalities and preferences are complex and multifariously different depending on her Ascension stage.

[First Ascension]
If we were to liken these three Ascensions to sisters, this is the eldest sister. Contrary to her terrifying appearance, she is quite personable with Master. Sometimes can be heard speaking with surprising maturity, which perhaps makes her seem to be the one with the most common sense?

[Second Ascension]
The middle sister. She is straitlaced and closest to the young Puritan Abigail. She is very curious and studious. She is also meticulous and put-together.

[Third Ascension]
The youngest of the three sisters. She's somewhat immature, yet innocent. Because of her purity, the madness close at hand. This is a new side of Abigail that we have never seen before, which was likely the result of the effects of summer's many temptations.

The black cat that tags along is named "Nosh," while the gray cat's name is "Luthar." When Abigail is not looking, the two cats try to kill each other...in their own friendly way.

Back to School Campaign 2022

How far do you level your CEs?
I just watched Myst’s free CE tier list on Youtube in order to prepare for upcoming…
Does Aniplex own Type-Moon?
My friend and I were having a discussion about this and he’s saying that Sony and…
Busti's Stall Diary Chapter #554: Eh, Saileach
pixiv #明日方舟 是长发公主~ - 逸のあるく行のイラスト - pixiv 是长发公主~ by…
STOP KILLING NOBU! Gudaguda Yamataikoku CQ Thread
Nobu lives matter! You know the rules and so do I. Make team, take CE, kill boss, ???,…
Busti’s Stall Diaries Chapter #553: Okita's New Drip
The strongest member of the Shinsengumi has got new drip and is rapidly aprouching to…
Read More