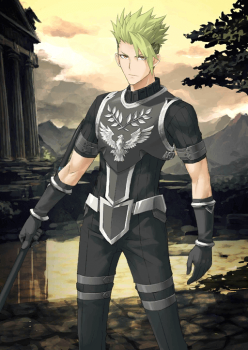 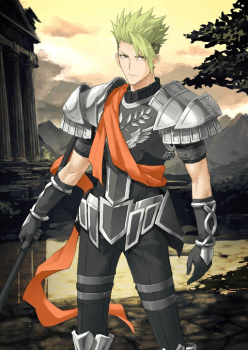 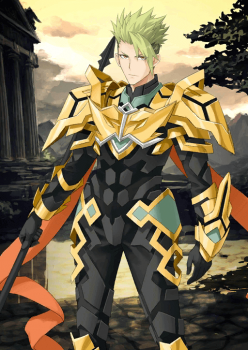 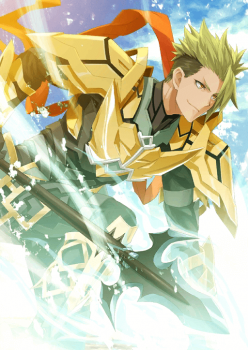 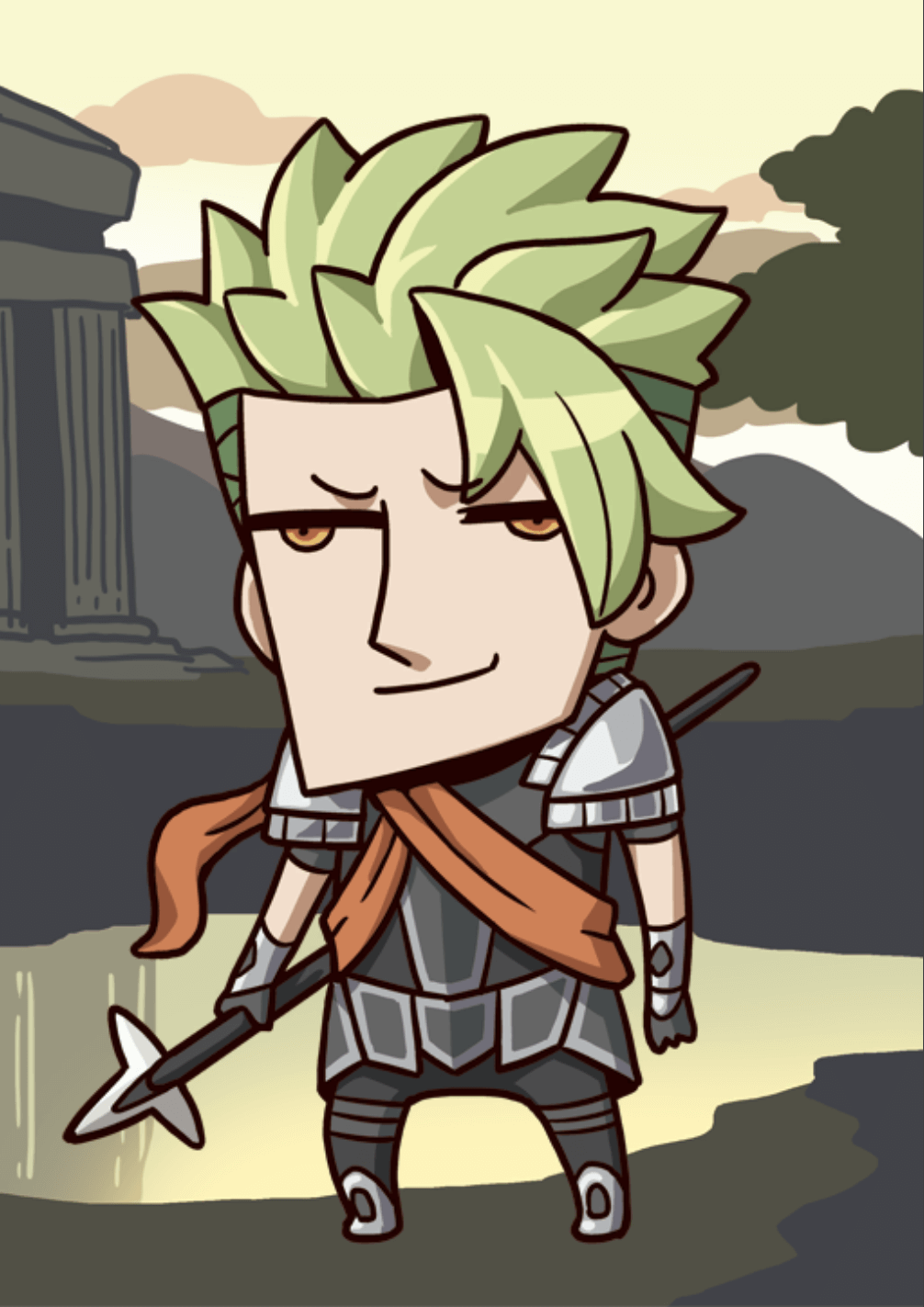 The Object That Can Hold A Universe

When equipped on Achilles,
Increases own NP Damage by 30% and grants Invincibility to Party for 1 attack (last 3 turns or until being attacked) when he is on the field.

“There aren't many things I prefer over fighting. Wine, women and riches all are accessories for a good fight. ”

As brave as he is valorous, the great hero of the Trojan war is an embodiment of brutal speed and skill, not unlike a comet in Servant form. A multi-purpose and self-sufficient Rider, Achilles’s battle prowess is demonstrated in Fate / Grand Order with a combination of a powerful wave-clear Noble Phantasm, NP Battery, great NP looping potential, incredible base stats, strong survivability, and team utility.

While Achilles is certainly well-rounded, his strongest asset is his farming capacity, greatly owing to the 30% NP Battery from Diatrekhōn Astēr Lonkhē. His Noble Phantasm - Troias Tragoidia, is certainly no slouch in terms of damage either as it applies a Quick Performance buff before dealing damage, and benefits from a further 3-turn 30% Quick Performance buff from his first skill Drómos Komḗtēs and 11% from his Riding passive. Achilles’ rampage does not stop there, as his NP refund potential is outstanding with a high hit count on his Noble Phantasm and an NP Gain buff from Diatrekhōn Astēr Lonkhē. When supported with further Quick Performance and/or NP Gain buffs, Achilles is highly capable of looping Troias Tragoidia several times per battle.

Outside of his farming duty, Achilles performs equally well as a Damage Dealer in other content. His incredible base Attack, high natural Star Weight, and Critical Damage buff from Drómos Komḗtēs contribute to Achilles’s fantastic damage output. In terms of survivability, his second skill - Andreíos Amárantos gives him all he needs - a 2 hit Invincibility buff that lasts for 2 turns and a further Defense buff for 3 turns on a short 5-turn cooldown. This skill also has great synergy with the Taunt effect from Diatrekhōn Astēr Lonkhē, allowing Achilles to protect his allies when needed against heavy hard-hitting sources of Single Target damage.

Achilles has few weaknesses to speak of, and most of them are not particularly detrimental to his overall performance. While not lacking anything, most of his self-buffs don't have outstanding values. Without strong Quick-centric Supports like Scathach=Skadi, Achilles does not unlock his full potential as a looper, and his overall damage will not pull ahead of other Riders, as Quick cards still have lower base damage compared to Buster and Arts cards.

All in all, Achilles is a fantastic Servant with a clear and effective gameplan. His baseline performance can already give most of his Rider peers a run for their money, but he becomes truly ridiculous when properly supported. Any Masters lucky enough to have this great hero will massively benefit from his presence for any form of content in the game.

While Achilles’s base NP gain per hit is not something out of this world, he has high hit-counts on both his Quick cards and his Quick AoE Noble Phantasm, three sources of Quick Performance buffs, a 30% NP battery and 30% NP Gain buff. Furthermore, his innate high Rider-class Star Weight and the ability to Taunt the enemy also helps him build up his NP Gauge indirectly. When used alongside Servants that grant high NP Battery, NP Gain, or Quick Performance buffs like Scathach=Skadi, Zhuge Liang, Paracelsus, and Nero Bride, Achilles is capable of looping his Noble Phantasm.

Thanks to his high Attack and Quick Performance buffs, Achilles can handle most common Berserker or Caster waves with Troias Tragoidia. The lack of Upgrade on his Noble Phantasm may pose a problem against high HP enemies, but Achilles also scales well with both Attack and NP Damage buffs, which are relatively common.

Andreíos Amárantos is essentially an upgraded Protection from Arrows, giving Achilles much needed survivability through hit-based Invincibility with high uptime that can last multiple turns. It also grants a small Defense buff which does help when the Invincibility buff runs out, especially when combined with other defensive buffs such as Damage Cut.

As a Rider, Achilles has naturally higher Star Weight (206), which helps gravitate Critical Stars toward his cards when used alongside classes with lower Star Weight like Saber, Caster or Assassin. His Quick cards and Noble Phantasm also allow Achilles to generate a decent chunk of Critical Stars, particularly from Quick chains. Last but not least, Drómos Komḗtēs gives a sizable Critical Damage buff with good uptime. All things considered, Achilles’s damage output as a Critical Damage Dealer is certainly respectable.

Achilles can act as a pseudo-tank for the team with the combination of Andreíos Amárantos’s Invincibility and Diatrekhōn Astēr Lonkhē’s Taunt. Against enemies with strong Single Target damage, this combo can help buy a turn for the team. The Taunt also works indirectly as a way to build up Achilles’ NP Gauge, particularly against enemies with high hit-counts.

While Achilles’ skills provide him many beneficial effects, most of them have rather middling value. In general, while his baseline performance is certainly good, Achilles will not be able to reach his full potential as a looper without external support, namely strong Quick-centric and NP Gain supports such as Scathach=Skadi, Paracelsus or Nero Bride.

In mythology, the hero Achilles is blessed by the god with all the protections and armaments in his quest for glory. Similarly, in the game, his skills reflect this by packing incredible effects that are all immensely helpful with reduced cooldowns. It is highly recommended to at least raise all of Achilles’s skills to level 6, and Masters may consider going for 10/6/10 or higher depending on resources

For a farming Servant, Starting NP Gauge is the bread-and-butter choice, and Achilles is no different. When combined with Diatrekhōn Astēr Lonkhē and other NP Battery sources, he can immediately kickstart his Quick NP pain train from turn 1. To improve his NP Damage output, NP Damage and Attack Up gives him the best increase as he does not have any of these buffs himself. Hybrid Craft Essences that grant these effects, alongside other beneficial secondary effects that he can take advantage of such as Critical Damage, Critical Star Generation, NP Gain or Quick Performance are also great choices.

The most satisfying thing that's happened playing FGO
So, I wanted to know what the most satisfying/cathartic thing you’ve done/experienced…
Which Support Caster + Lunchtime is Preferred?
Since I can’t ask my friends list, I figured I’d ask the forum instead. I have Skadi,…
Which mana prism ce should I buy (I don't have any)
Gilfest gave me a lot of mana prisms and I want tp invest them into some of these ce’s…
I created a monster
So my fiancee recently got back into FGO (she gets bored of games easily) and asked me…
Christmas lottery farming comp
Everything is on the title, I’m searching, for the upcoming Xmas lottery, the comp…
Read More