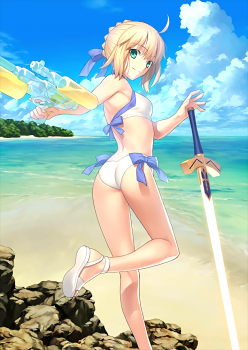 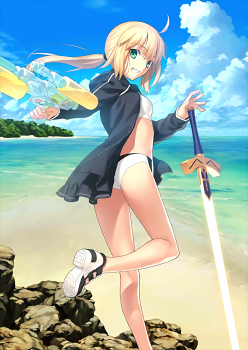 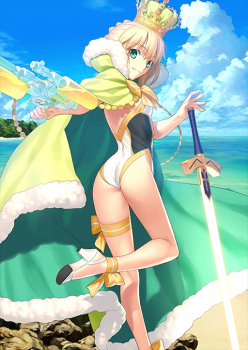 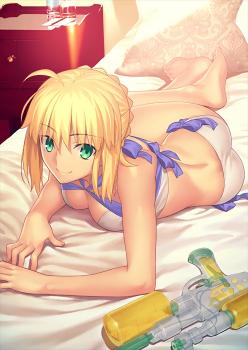 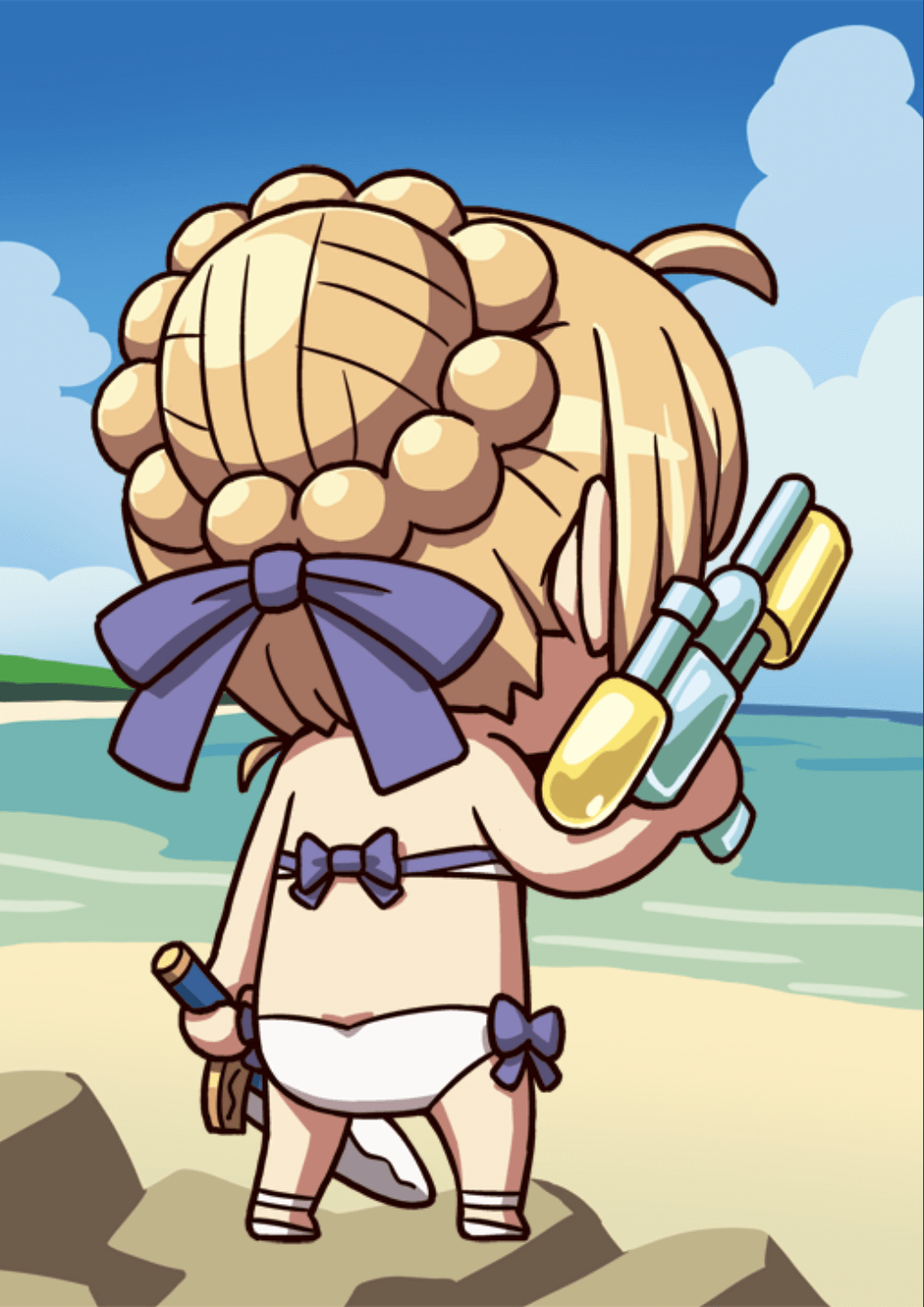 Self Heal Self NP Gauge Down [Demerit]

Recover own HP.
Decrease own NP Gauge by 10%. [Demerit]

Deals damage to a single enemy.
70% chance to reduce enemy NP gauge by 1.

When equipped on Altria Pendragon (Archer),
Increases party's attack by 15% while she is on the field.

The legendary King of Knights has descended on the beach! Infused with the spirit of summer, Altria is granted the strength to spam her Noble Phantasm. While her base NP gain stats are nothing out of the ordinary, when combined with Altria’s Arts buffs (both active and passive), her high base critical star weight, and her NP’s overcharge refund and high hitcount, she becomes a monster capable of spamming her NP more often than virtually any other Servant. Furthermore, she also has some supportive capabilities in the form of party-wide attack and defense buffs, and even utility in her spammable NP Drain.

While Altria doesn’t possess any crippling weakness, neither is she perfect. The biggest problem in her kit is that her NP Drain chance is locked at an uncertain 70%, which can ruin the player’s timings during crucial turns. Moreover, although Altria does have her self-healing skill, she has no Evasion nor Invincibility skill, which leaves her vulnerable to high-damaging enemy NPs. Additionally, her healing skill consumes NP charge, meaning that it cannot be used on the same turn as her NP unless she has 110% or more NP charge (which requires NP2) or an ally capable of charging NP.

Altria has one of the best NP spam potentials in the game due to her buffs and NP charge refund, allowing her to perform back-to-back NPs more reliably than virtually any other Servant. Thanks to this she has incredibly high damage potential, and when the other parts of her kit are brought into the picture, she is even able to potentially solo some stages under the right conditions.

Possessing party-wide ATK and DEF buffs, Altria provides bonus performance to her allies. The defense buff in particular is a great boon for an offense-oriented Servant, as it allows her allies to support her for a longer period of time. Furthermore, these bonuses also benefit her as well.

Possessing high damage potential, a considerable bulk (thanks to Altria’s defense buff and self-heal) as well as the capability to continuously drain the boss’ NP charge almost indefinitely with her NP spam, Altria is a great choice for many challenge quests.

No Evasion or Invincibility Skill

Although Altria’s defense buff and self-heal provides great resilience against normal attacks, none of her skills provide total damage mitigation. While this weakness can be easily be made up for with her NP drain spam and by stacking additional defense buffs on top of her own, Masters will have to time her skills carefully, especially considering that her NP drain can fail and ruin the timing.

Due to Beach House Protection reducing Altria’s own NP charge, it normally cannot be used on the same turn as her Noble Phantasm. The only exceptions to this rule are when Altria is NP2 or above with at least 110% NP charge, or when there is an ally capable of charging her NP gauge.

Summer Splash! A+: Boosting both Altria’s Arts Performance (which also enhances the NP gain from her Arts cards) for three turns as well as providing a party-wide Defense buff, Summer Splash! is easily her best skill. As it also suffers from the longest cooldown in her kit, leveling this skill first allows her NP spam to have more reliability as well as uptime.

Beach House Protection EX: Due to the many support Servants in the game being able to provide defensive assistance, the situational aspect of this skill, as well as its relatively low cooldown, this skill does not need to be prioritized. Still, the cooldown reduction may be crucial in the hardest fights, so it is still a good skill to level overall.

Beach Flower B: Providing an attack buff equal to Charisma B, this skill’s low cooldown allows it to constantly buff not only Altria’s, but also the whole team’s damage. The star generation buff on Male allies is more of a bonus, but it allows more stars to be generated with the correct party, in turn giving Altria more reliable critical hits.

Craft Essences which increase the performance of Arts cards are generally preferred for Altria, especially in less-synergetic teams. Aside from increasing her damage (both from NP and normal cards), they also boost Altria’s NP gain rate, allowing her to spam her NP more reliably.

When top-tier support Servants are brought into the picture, there is not much need for additional NP gain aid for Altria. As such, Craft Essences which directly increase NP damage are recommended, not only because of their higher percentages, but also because their buff scales better with Altria’s own Arts and Attack buffs.

Thanks to Altria’s high star weight, her two Quick cards, as well as her star generation buff on males, this CE is a great choice if she is to go for the critical route. While it can be helpful in normal stages, her critical damage itself is nothing out of the ordinary due to her lack of Buster cards.

While these Craft Essences are not usually needed, there may be some stages where Altria would need to get her NP spam going right away. These Craft Essences provide such a means, while still granting her additional benefits for the long run.