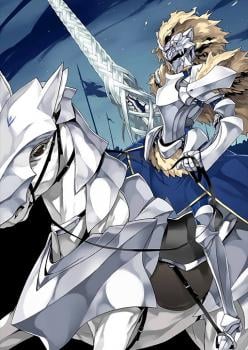 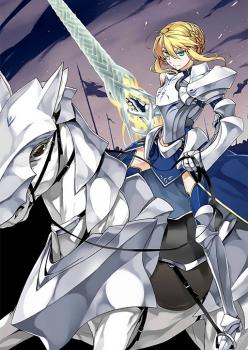 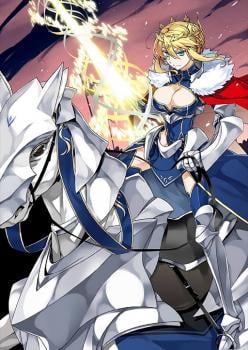 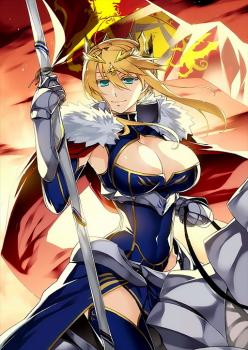 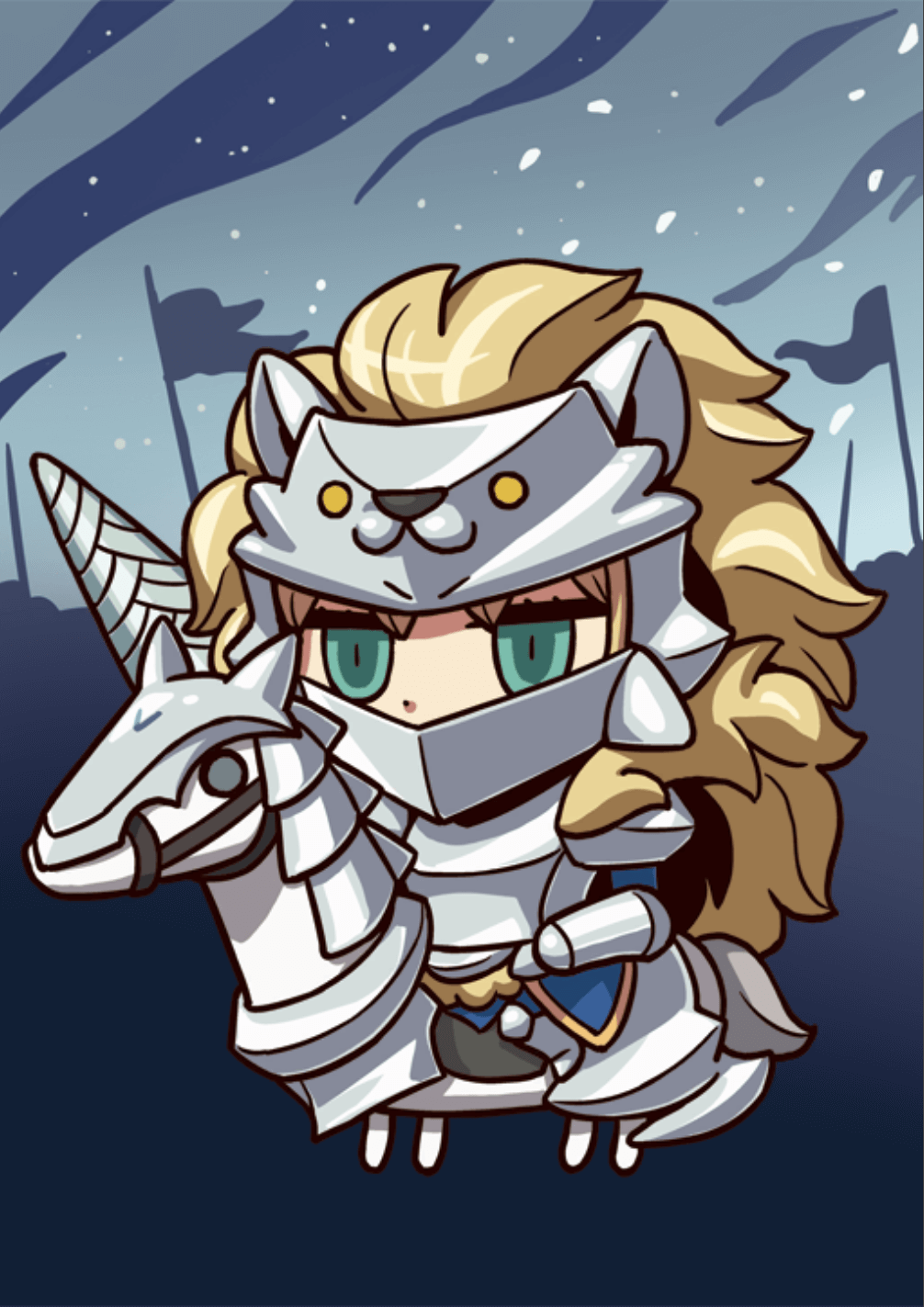 Self NP Gauge Up Self Debuff Clear

Torrent of Light A+

Apply Ignore Invincibility for yourself (1 turn).
Deal heavy damage to all enemies.

The Spear That Shines To The Ends Of The Earth

When equipped on Altria Pendragon (Lancer),
Increases party's attack and NP Strength by 10% while she is on the field.

“...Behold, Master. The world is as beautiful as the ends of the world. My lance protects this brilliance.”

A version of King Arthur who chose to wield the divine lance Rhongomyniad over Excalibur, Altria Pendragon (Lancer)’s fighting style fittingly revolves around the Lance’s AoE Buster NP, emphasizing its multiple use over pure damage numbers. Her Altria identity is reflected through her kit, which shares a lot of skills with her Saber-class counterpart.

Altria (Lancer)’s role as a strong AoE damage dealer is cemented through the standard but solid combination of Mana Burst and Charisma. Where Altria truly stands apart from her peers though, is her NP gain focus through her third and unique skill, Protection of World’s End. This massive NP Gauge boost gives her as much as 50% NP charge when maxed, and Altria (Lancer)’s NP throughput is even further improved by Rhongomyniad’s 20% NP charge refund. In addition, despite only having one Arts cards, Altria (Lancer)’s overall NP gain is pretty good given her high base NP gain as well as the boost from Riding. Finally, her kit is rounded off with a pair of valuable utilities in the form of Protection of World’End’s debuff removal on self, as well as Rhongomyniad’s pre-NP Invincibility Pierce.

There are, however, several weaknesses hampering Altria’s overall performance. The first and most significant is that Altria (Lancer) kit only allows her to unleash one heavily damaging NP, as without support she only has her Charisma and average attack stat to draw on. With no other high damage dealing avenues than her NP, her overall offensive impact is thus  often limited without external Buster support. Her second major weakness is that Altria (Lancer) lacks any sort of defensive skill, forcing her to rely on her allies in this regard.

All in all, Altria (Lancer)’s weaknesses are relatively clear-cut and can be easily solved through careful selection of her allies. While her NP1 performance won’t pack the same punch as other Lancers with upgraded NPs, Altria’s capability to unleash it in quick succession works very well during farming sessions or against bosses with the Break mechanic, while her Invincibility Pierce and debuff removal utility may prove useful in more difficult quests.

Altria (Lancer)'s NP Gain is not that different from Servants such as Sakata Kintoki (Rider), Okita Souji and Meltryllis who all possess 2-hit Arts cards with strong Quick/Extra cards, and a high Base NP Gain. Any AQQ-chain from Altria (Lancer) will produce very impressive NP Gain, especially under the influence of Overkill. Even her ABQ-chain is rather good.

That said, her 1-hit Busters are very weak for Arts starts. For a full list of her various card combinations and NP Gain, please visit the Command Chain Calculator

Thanks to Protection of World’s End’s instant 50% NP charge, Altria can achieve first-turn NPs without much restriction on her CE pool. This makes her really flexible for farming, especially when event CEs are involved.

Altria’s 20% NP refund is often overlooked, but coupled with her good base NP gain, this allows her to refill her NP gauge without much trouble, and with her third skill she can even unleash back-to-back NPs with the correct CE and supports. Her multiple NPs also mean that her Brave chains come more often, indirectly increasing her overall damage and generation. Thanks to Riding, as well as decent hit counts on her Quick and Extra cards, the critical stars she occasionally makes, though unreliable on their own, complement the ones provided by other sources nicely.

Altria’s Charisma provides a decent damage boost for the entire team for 3 turns, helping the team clear waves more easily. On the utility side, Rhongomyniad’s Invincibility Pierce is applied for a whole turn, which means that Altria (Lancer)’s Brave chains are extremely potent against enemies with Invincibility/Evasion gimmicks. On the other hand, Protection’s debuff removal is considerably more situational, not least because the skill is most often used for its NP Charge aspect. Still, it can prove useful against enemies with pesky debuffs, especially those that reduce her offensive strength.

A combination of unupgraded NP, and the lack of other damage-dealing avenues (such as criticals) leaves Altria struggling to match her competitors in terms of sheer damage output. This weakness is felt most when fighting high HP bosses, though its impact can be mitigated with the use of Buster damage supports such as Merlin, Raikou (Lancer) or Nightingale.

Despite her high base HP, none of Altria’s skills boost her survivability or sustain, and she will generally need to be supported in higher-difficulty quests.

All of Altria’s skills are directly tied to her main role and should ideally be maxed in the long run. Generally speaking, it is recommended to get her first two skills to at least level six, while Protection of World’s End should be maxed as soon as possible.

Altria would most often be seen equipped with Starting NP Gauge CEs (both pure and hybrid), making use of her instant NP capability to quickly run through waves of Archers or Berserkers. While she works well with Attack Up and Buster Performance Up CEs(additive), NP Damage Up (multiplicative) is Altria’s preferred offensive effect, and pure CEs of this category are also very powerful picks for her. Lastly, NP Gain CEs do work fairly well for successive NP strategies given her high base NP Gain..