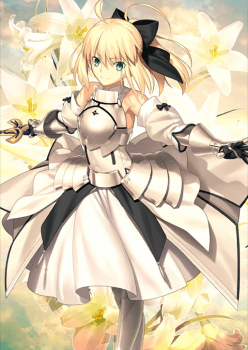 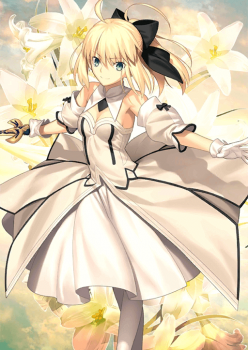 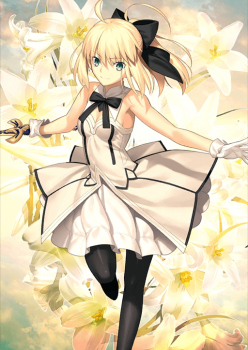 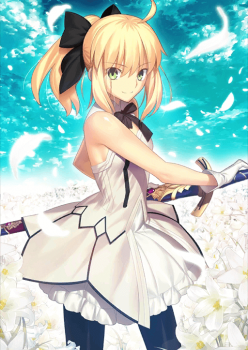 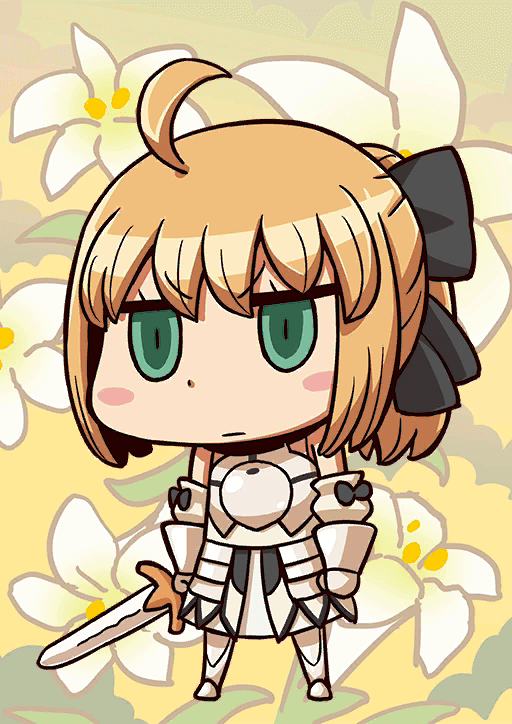 Road of Falling Petals A

Journey of the Flowers EX

Golden Sword of the Victorious

Upgrade via Rank Up Quest.

Golden Sword of the Victorious

Voyage of the Flowers

Note: Altria Pendragon (Lily) will be added to the Friend Point gacha from January 2022 for the global server at around 0.05% Summoning Chance.

Named “Lily” for her dress sharing the appearance of the flower by the same name, Altria Pendragon (Lily) is a form of Altria as she was after drawing Caliburn from the stone, but before she receives Excalibur. She is a younger, more naïve incarnation of Altria, and as such, is not as proficient in combat as the other Altrias.

Altria Pendragon (Lily)'s main strength, and essentially her only purpose as compared to other available lower rarity options, is that of a massive (budget) AoE Buster NP cannon. And, despite what her stats may tell you, she does that exceedingly well. Due to both her Rank Up and her Mana Burst, Saber Lily will readily surpass any NP1 gacha Sabers with her own NP5 Caliburn when it comes to raw NP Damage alone. In addition, Caliburn packs a decent hit count, allowing Masters with Star Generation Up to generate some Critical Stars while doing so.

Unfortunately, Saber Lily is the only welfare Servant that costs 12 to field, yet only possesses the stats of a 3* Saber along the lines of Fergus or Bedivere. While this greatly reduces her offensive potential on its own, both her Intuition and her Journey of the Flowers have poor skill values to boot. In addition, her use outside of farming is rather limited considering she only has the healing from her Overcharge to improve her poor survivability.

Thus, Saber Lily is a Servant best supported with (Buster) Supports such as Shakespeare, Waver, Merlin or Helena Blavatsky that charge her NP for her and add even more steroids to her already chunky NP. That way, her low base stats are not as noticeable considering her high cost. In its own way, her Rank Up provided her with a decent budget niche of her own at last.

With an extraordinarily high, and unique, NP Damage modifier, Caliburn deals far more damage than is to be expected from someone with stats similar to a 3* Servant. Altria Pendragon (Lily) can therefore keep up with Servants such as Suzuka Gozen even at equal NP levels when it comes to NP Damage.

While Saber Lily's support potential is rather small, she can provide that extra boost to charge NPs a turn earlier and/or set up a critical turn with some clever buffing. Her 8-hit NP along with a sizable Star Generation buff, Overkill and/or her Intuition can set up a strong wave 3 for another Servants.

For a 4* unit, Altria Pendragon (Lily) has base stats comparable to a silver Servant. While this is not an issue for her NP Damage, it is an issue when it comes to any follow up attacks as her Command Card damage is below par for her cost and she may struggle to carry a Master through a node on her own.

While on release Saber Lily skills were fairly rare and somewhat competitive in value, both Intuition and Journey of the Flowers are woefully undertuned and have very little noticeable impact especially at lower levels.

Unlike all other welfare Servants, Saber Lily behaves exactly like a normal Servant when it comes to material costs. As such, ascending her is more expensive material-wise for new Masters, while the returns on leveling her skills past 4 need to be seriously considered.

In spite of her Overcharge's sizable heal, Saber Lily's durability is rather terrible, with a lower base HP stat for her rarity and a complete lack of means to attempt to survive any heavy enemy damage.

There is but one skill that truly helps Saber Lily do her job better, Mana Burst, while the other skills provide minimal returns. Masters who lack a powerful AoE Saber may want to invest heavily into Mana Burst however, but the rest of her skills are probably best left at rank 4 at which point skill material costs shoot up.

Note: Given Saber Lily's low attack stat, it is essential that her CE grants as much attack stats as possible for better performance.

Altria Pendragon (Lily) finds her best use in farming or wave-clearing situations. As such, Masters should try to get her to fire Caliburn as soon as possible and/or as hard as possible depending on how strong the unfortunate enemies will be. Prioritize Starting NP Gauge first and foremost, followed by providing her with NP Damage Up or Attack Up. Buster Performance Up is always an option as well, but stacks additively with Mana Burst.

Pulling Caliburn the Sword of Selection out, this is the Altria who just started walking the path of kingship.
Because of such, she's still a half-boiled knight.
She's as fresh faced as a lily, and her eyes are filled with glimmering hope.
She walked across the country to experience many things, and left many adventures to tell.
Those saved by her praise her as the Princess Knight from her elegance.

Height/Weight: 154cm, 42kg
Origin: Legend of King Arthur
Region: England
Alignment: Lawful-Good
Gender: Female
Training to be a knight is rough, but if I can take care of my horses, I'm happy.

A romantic knight who betters herself daily to become the ideal king.
She is still half-boiled so she still acts like a girl, and her heart is filled with dreams and hope.
When she vacations in different countries, she spends her time with her brother-in-law Sir Kay, and their accompanying mage Merlin.
Things usually start with Altria making a fuss, then frustrating Merlin, and Kay picking up the pieces.

Intuition: B
Always "feels" the optimal flow for herself during battle.
Her honed sixth sense is almost precognition.
Reduces the effect of any interference to her sight and hearing.
However, having good hunches is not so good... She acutely picks up the worries of everyone she meets, so she ends up helping each and every person she comes across.

[Caliburn]
Rank: B (Conditionally A+)
NP Type: Anti-Personnel
Golden Sword of Assured Victory.
Originally a sword used to select a king, the "Anti-Personnel" is not against an enemy, but to one who will wield the sword in the future. If the wielder stays just as a king, and is finally deemed worthy, its strength will be appropriate for a sacred sword.

The destined child born to save Britain from its destruction and path to ruin. A "reincarnation of a dragon" created by the previous king Uther and the mage Merlin. This is why she is referred to as the Red Dragon that protects Britain.
Has the heart of a dragon, the highest rank of phantasmals, and the amount of magical energy that can be created within her body overwhelms all other Heroic Spirits.

Clear "Sword of a Young Flower"

Caliburn and Excalibur are different sacred swords.
Caliburn nurtures royalty, and raises Arthur into a king.
Originally, Caliburn was used for ceremonies.
Using this as a weapon by releasing its True Name can exert the same firepower as Excalibur, but the sword will not be able to withstand Altria's magical energy and will likely disintegrate.