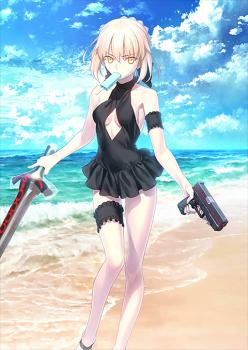 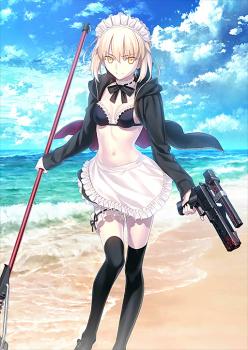 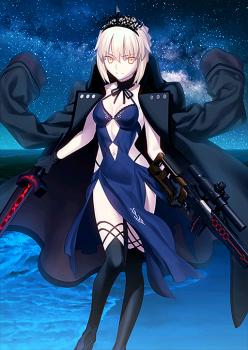 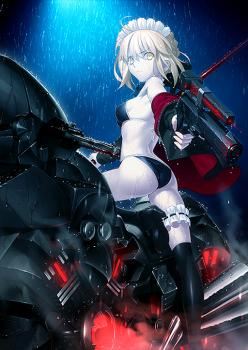 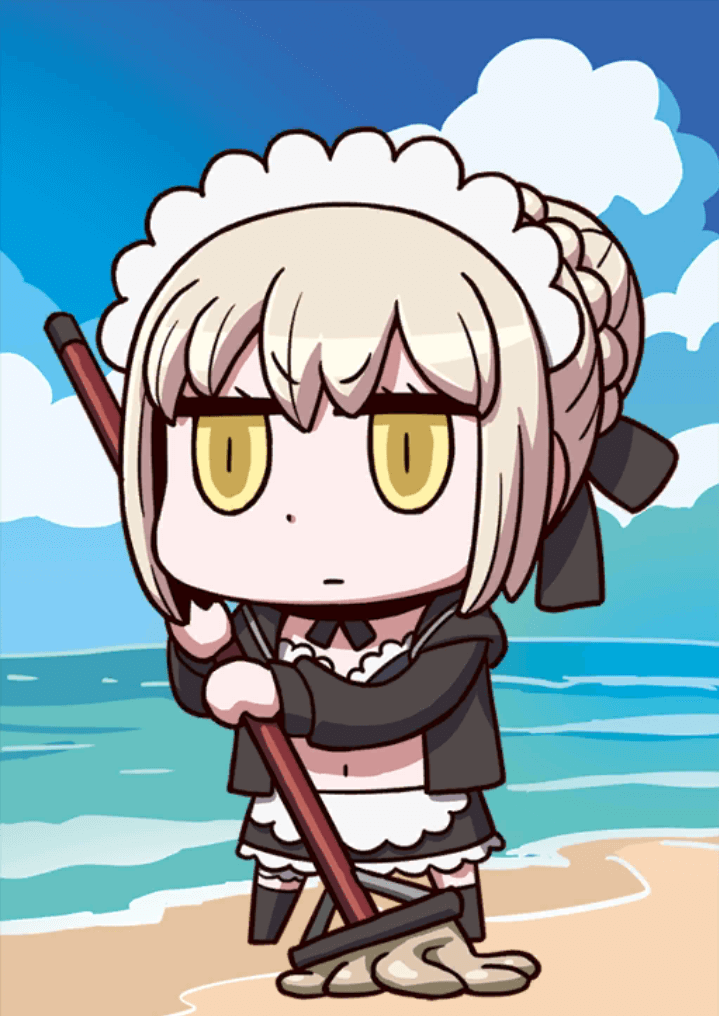 Decrease Skill Cooldown for an ally by 1.
Increase Critical Star Drop Rate for an ally (3 turns).
Deal 1000 damage to an ally. [Demerit]

Decrease Skill Cooldown for an ally by 1.
Increase Critical Star Drop Rate for an ally (3 turns).
Deal 1000 damage to an ally. [Demerit]
Apply delayed buff to an ally: After 1 turn, increase Max HP for an ally (5 turns).

Deals damage to a single enemy.
Charges own NP gauge by 10%.

Donning either a maid outfit, or a getup which just screams 90’s techno spy flick, the corrupted King of Knights saddles up for this Summer’s Servant roster with trusty steed (read: motorcycle) included. In this version, Altria Pendragon (Rider Alter), or Maid Alter, is fundamentally a single-target Quick Servant with a focus on high damage output along with some (Quick) Support.

Indeed, with the very large offensive boosts to her Quick cards provided by Summer Sweeper!, Riding B and Reloaded, Maid Alter reaches offensive NP Damage heights that are among the highest for non-Anti-trait Noble Phantasms, in spite of lacking a Noble Phantasm upgrade. In addition, with her Independent Action EX granting a notable boost to her critical damage, Maid Alter can use her steroids and high Rider star weight to both deal good damage and shore up her NP Generation performance. Meanwhile Maid Alter does dabble in some support as Summer Sweeper! A provides a moderate Quick buff to the entire team, while at the cost of some HP Coaching can provide the rare support of both reducing any allied Servant’s cooldowns by 1 and improving their star generation.

Yet, for a Servant with such powerful Quick Performance boosts (or perhaps because of them), her basic Quick Cards are noticeably undertuned with relatively low NP Generation.Thus, despite both Riding and Independent Action, Maid Alter’s QQAAB is difficult to support right, and only after the release of Skadi can Maid Alter easily extract strong sustained damage outside of her NP as well. Furthermore, Maid Alter lacks any defensive option to protect herself, and may even hinder her own durability should she choose to use Coaching A on herself. Lastly, Her star generation, while still above what is typical for a Rider, may often not be sufficient to allow herself to consistently land the criticals she wants to charge her NP.

On the whole, Maid Alter packs a punch like a .50-calibre bullet, and has the aesthetics to match. Her high NP damage output can be appreciated by anyone, and while her supportive options are relatively narrow, needing a mixture of defense, NP charging and Critical/Offense, she is exceedingly effective if the right mixture is available. So long as a Master can bear with a more limited pool of team options to assist Maid Alter both offensively and defensively, she won’t steer them wrong.

Reloaded's Quick Up buff lasts for 3 turns on a 3-turn cooldown at skill level 10, and fades when Maid Alter next uses a Quick card. In combination with Coaching or Skill cooldown reduction from another source, such as the Atlas Academy Uniform Mystic Code, it is possible to have this skill’s buff active twice at the same time, resulting in a terrifying amount of damage on her NP from just her own skills alone.

However, this does require avoiding using any of her Quick cards for 2 whole turns, which may result in a greater reduction in damage than that gained from the improved NP damage.

For a Servant with no Noble Phantasm upgrade, Maid Alter has a very impactful Noble Phantasm, frequently hitting for over 100,000 damage on Caster foes with all her maxed buffs active at NP1. Masters can even further buff that damage by using the trick of avoiding using her Quick cards to stack Reloaded’s Quick Up buff twice for even more damage.

While Maid Alter isn’t breaking any records with her critical damage, her combination of high-ranking Independent Action, Riding and Rider-class star weight on top of her generally-powerful self-damage buffs means she can certainly pack a punch with the stars she gets, even despite her QQAAB deck and relatively low base Attack. Furthermore, her easy access to critical hits for her Arts cards helps to salvage her otherwise vanilla NP Generation Performance.

While not spectacular, a team Quick Performance Up, a Critical Rate Down on her NP, and most importantly her targetable Skill cooldown reduction are all situationally powerful effects in the right hands, and can sometimes mean the difference between victory and defeat.

Despite an array of Quick Performance buffs, Maid Alter’s poor base Quick NP Generation limits her overall NP generation especially as her best NP generations chains without Overkill (such as AQA) deal limited damage. This also makes it more difficult to select the right support for her, as her kit still synergizes best with a Quick-oriented team compositions.

Not Self-sufficient in Star Generation

While Maid Alter isn’t completely lacking in star generation, her two 3-hit Quicks tend to not be enough to sate her need for stars when dishing out crits. As a result, A Fragment of 2030 on one of her teammates is usually appreciated, if not some other form of star generation.

Maid Alter’s high HP stat does little for her if she can’t endure bigger hits well. Her NP’s critical rate down debuff can help her from time to time, but she demands some form of defense buff or dodge / invulnerability to survive NP’s from the enemy especially as Coaching also reduces her HP if targeted on herself.

Maid Alter is largely a damage-focused Servant, and so her skill leveling should focus on improving that first and foremost. However, all of her skills are powerful tools, including some good supportive utility, so all of them should be leveled if it can be helped.

Maid Alter is a Quick-focused Servant with both Quick Performance Up and Attack Up buffs built into her own kit. As a result, her priority should be in accessing NP Damage Up buffs to increase her NP’s punch optimally, while Critical Damage Up is excellent if her regular card damage is the main focus. As with all Servants possessing useful damaging NPs, Starting NP Gauge CE’s can aid her in NP’ing faster, while NP Gain Up with stack effectively with her numerous Quick Up buffs to build up to her next NP faster.