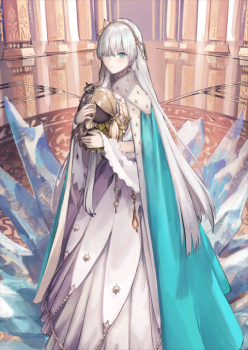 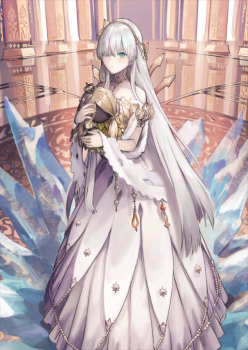 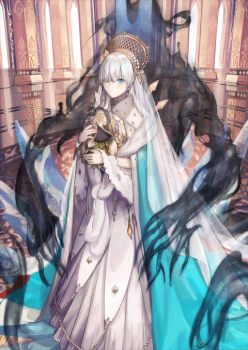 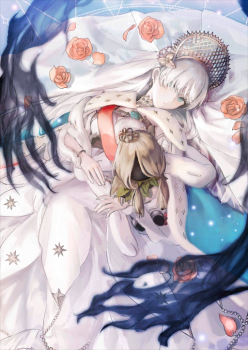 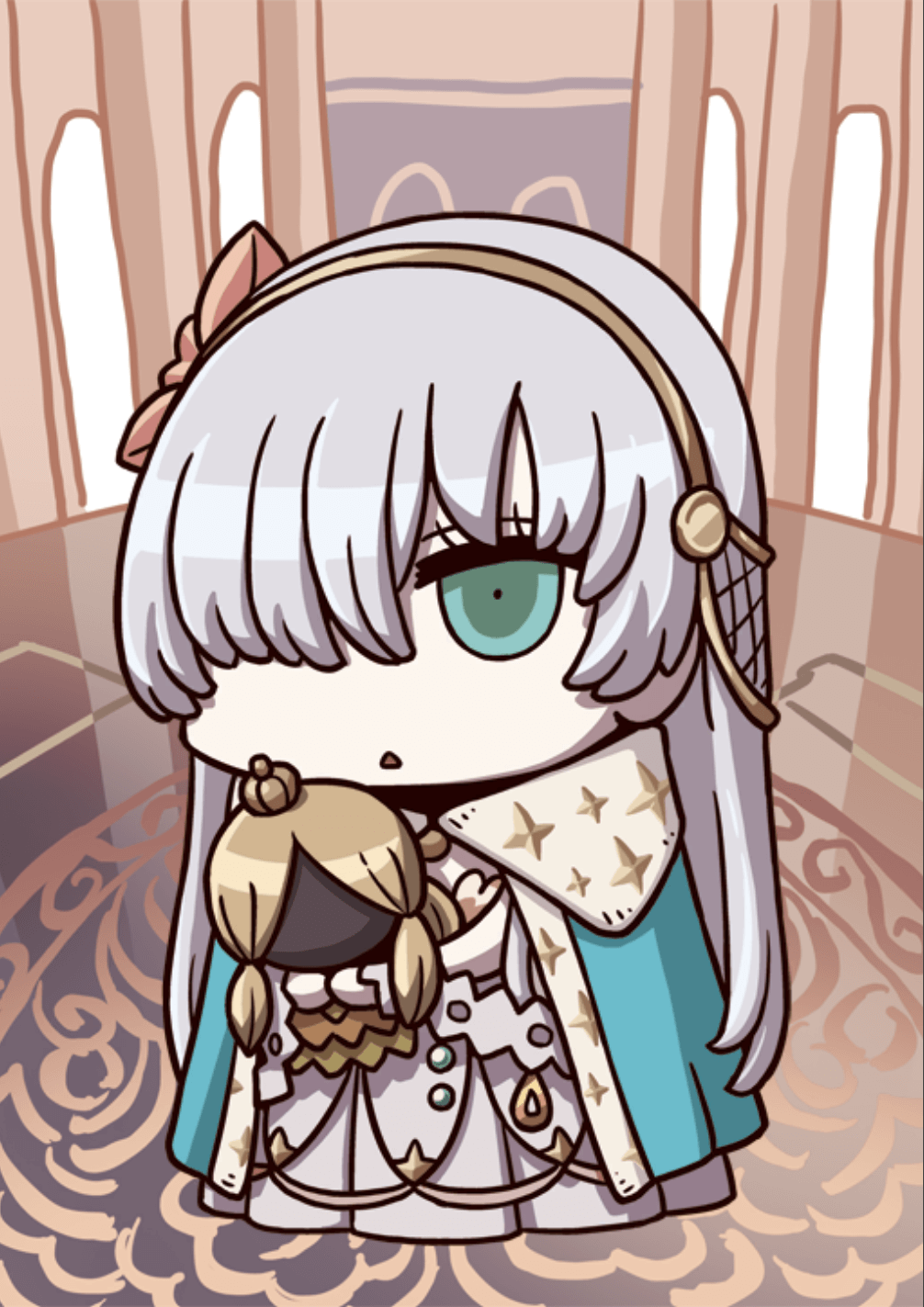 Increase own NP Gauge.
Chance to inflict Stun on a single enemy (1 turn).

Deals damage to all enemies.
Inflict Skill Seal on all enemies (1 turn).

When equipped on Anastasia Nikolaevna Romanova,
Increase all allies' Arts Card effectiveness by 10% & NP Strength by 10% when she is on the field.

“Offer thy life to me, the Tsarina of Romanov... Kidding. Don't take it seriously. This is already enough for me.”

The tragic final Grand Duchess of the Romanov dynasty, Anastasia is as beautiful and pure as she is mischievous, earning the nickname “Schwipsig” - “Little Imp” - for her playful nature. Anastasia manifests this quality in-game as a damage dealer with a wide array of powerful utility and straightforward support effects, and an AoE Arts Noble Phantasm well suited for Arts farming teams.

Anastasia’s primary usage is her wave clear capacity, which is of course highly useful for farming purposes. Packing an incredible 50% NP battery from Schwipsig, an AoE Arts Noble Phantasm that is further boosted by a 50% Art Effectiveness buff from Mystic Eyes of Penetration, and a 20% Attack buff from Frigid Charisma, the Duchess is a great candidate for taking on waves of Assassins or Berserkers. Furthermore, thanks to her good base NP gain per hit and high hit counts on Viy Viy Viy, Anastasia gets a sizable amount of NP refund from each Noble Phantasm as well, allowing her to use it frequently and even loop her NP in the right setup.

But Her Highness is more than just a wave clearer, as her kits also bring a slew of support and utility effects. Aside from being her main steroid, Mystic Eyes of Penetration also grants her a Ignore Invincible buff for one turn and inflicts a powerful Debuff Resist Down debuff at the same time on one enemy. This debuff ties very well towards the other components of her kit, as it allows the teamwide Attack Down debuff on Frigid Charisma, the Skill Seal and Defense Down debuff on her Noble Phantasm, and especially the targetable Stun from Schwipsig to hit much more reliably. This also helps her teammates, particularly those with powerful debuffing capacity like Shuten Douji to cripple enemies in lengthy battles.

On the other hand, Anastasia's damage is far from outstanding. Her Noble Phantasm damage is highly reliant on her Mystic Eyes of Penetration Arts Effectiveness buff, and her mediocre base Attack and Caster modifier do little to improve her NP Damage. Seemingly inspired by her backstory, Anastasia is also a frail Servant as she has no hard survival capacity to call upon in dire need. Last but not least, her two most important skills Schwipsig and Mystic Eyes of Penetration have fairly long downtime as well due to their short duration, with the former especially having a long cooldown, which limits her sustained offense.

Overall, Anastasia is a strong Servant, albeit in a stacked roster of AoE Casters. Her usefulness in farming alone already makes her a worthwhile addition to any roster. In fact, even in tough fights Anastasia’s main flaws can be supported well by top Arts supports (Tamamo no mae, Waver. etc.) that protect her while limiting her offensive downtime.

Depending on what order a Master is used to activating NP Charge skills and all their offensive buffs in a turn, Anastasia may frequently trip up your "rotation". You see, unlike most other Servants, if Masters want to stun the enemy they should first activate her Arts steroids and only then charge her NP to max (and stun the enemy). Doing it the other way around will often make the Stun miss, as the Debuff Resistance Down isn't in effect.

Packing a respectable NP generation per hit, 3 Arts cards, a further boost to Arts Effectiveness from her Territory Creation passive and a whopping 50% NP Battery from Schwipsig, Anastasia has a much easier time charging her NP Gauge compared to most Servants. Furthermore, her Noble Phantasm also has a good hit count for an AoE Arts NP, granting her excellent refund potential when she is stacked with NP Generation and Art Performance buffs. In the right setup, Anastasia can even use her Noble Phantasm several times in a row.

As an AoE Servant with a strong NP battery, it is natural that Anastasia would be competent as a farming Servant. When boosted by Mystic Eyes of Penetration and Frigid Charisma, Viy Viy Viy can deal respectable damage, and enough to take out most common Assassins or Berserker waves. A 3-turn farming set up is especially easy to create if masters clear the first wave with Servants such as Paracelsus, Avicebron or Nitocris who all have extremely powerful NP Charges.

Anastasia packs several debuffing components in her skill set, including Stun, Debuff Resistance Down, Attack Down, Defense Down and Skill Seal. Combined together, these debuffs can significantly improve the team performance. Furthermore, her Debuff Resistance Down is amongst the most potent of its kind, and can help allies landing their debuffs a lot more successfully, particularly against enemies with high innate Debuff Resistance.

Similar to many of her Caster peers, Anastasia suffers from a poor class modifier (0.9x) and mediocre base Attack. Mystic Eyes of Penetration also lasts for one-turn only, and she does not have any Critical niche or strong modifier on her Noble Phantasm to salvage her damage over multiple turns. To unlock her sustained damage potential, Masters need to rely on Arts supports.

Anastasia kits feature no hard survival mechanism like Guts, Evasion or Invincibility to bail her out of sticky situations. While her targetable stun can be influential in boss fights, it is very unreliable without her Mystic Eyes of Penetration’s Debuff Resistance Down.

Both Mystic Eyes of Penetration and Schwipsig have rather long downtime which significantly lowers her effectiveness in battles that last longer than a single round of skill activations. Mystic Eyes of Penetration has a reasonably 5-turn cooldown at max level, but all of its effects only last for a turn. Schwipsig has a much higher 7-turn cooldown at max level in compensation for two powerful effects.

All three of Anastasia's skills are powerful and scale well with levels. Of these, Mystic Eyes of Penetration and Schwipsig have the most impact on her performance and should be prioritized. In general, due to her farming nature and sound performance as an Arts DPS overall, Anastasia is a Servant that greatly rewards having all her skills maxed...should Masters farm enough Reactive Gunpowder.

As Anastasia is most often used as a wave clearer, Starting NP Gauge is ideal for any nodes where time to charge NP Gauge is not possible. With Schwipsig, Anastasia only needs a CE that grants 50% Starting NP Gauge to immediately access her Noble Phantasm, but CEs with higher values can help save the usage of Schwipsig for later. Since she has both an Attack and an Arts Performance buff, NP Damage Up grants her the biggest spike in terms of damage on her Noble Phantasm. Arts Performance Up and NP Gain Up are great secondary effects to look for when trying to refund her NP Gauge, however. In practice, Anastasia will do well with any hybrid Craft Essence that grants the above effect.

Anastasia Nikolaevna Romanova.
The youngest daughter of Nikolai II, the last emperor of Russia from the Romanov Dynasty.
She was caught up in the tumultuous conflict of the Russian Revolution, and was killed at Ipatiev House along with her family, servants, and even pets.

While she is naturally innocent, she tends to behave in a rather aloof manner immediately after she is summoned, as she is rather mistrustful of others. After gaining her trust, her more mischievous side becomes apparent. There is even a rather cute record of her taking a photograph of herself while looking into a mirror...a selfie, in the modern parlance. A few letters to her family survive today, providing a glimpse of her naivete and deep love for her family.

Schwipsig: B
Meaning "little devil," this is simultaneously one of Anastasia's nicknames and one of Viy's skills.

It is with this that little impossibilities, small acts of mischief, are made possible, whether it be creating small cracks in the ground to trip someone up, or snatching objects out of people's hands and having them fly into your own.

While this skill seems outrageous, its effective range is small and it cannot inflict serious or fatal harm.

[Viy Viy Viy]
Rank: EX
NP Type: Elemental Spirit
Range: ?
Maximum Targets: ?
Let Your Wicked Eye Run Free!
Viy's Mystic Eyes are fully unleashed.
They see through everything and can twist even causality, creating weaknesses that were never there before.

[Sumerki Kreml']
Rank: A+
NP Type: Fortress
Range: 1 - 99
Maximum Targets: 11 Persons + 1 Animal
Afterglow, Fortress of Cursed Blood.
A reproduction of the multiple fortresses (called Kremlin, or Kreml') that have been built throughout Russia. Anastasia, by her right as a descendant of the Romanov Dynasty, summons a splendid, impregnable fortress to protect herself.

Only those whom Anastasia selects may enter this castle. Any others will be seen as invaders, and the fortress will attack them.
This Noble Phantasm is, as a rule, not used in FGO.

The Elemental, or creature, called Viy does not really exist. It is a fictional monster from the horror novella "Viy" by Nikolai Gogoi, one of Russia's preeminent literary figures. However, there are many Slavic folk tales of spirits closely resembling Viy, and it's assumed that the story is based on them.

The version of Viy that has formed a contract with Anastasia is a familiar kept by the Romanov Dynasty. Using his Mystic Eyes, Viy could expose secrets, seek out a fortress's weakness, and paint the walls with his enemies' blood.

Without the necessary aptitude, one could not even see him, much less control him. It was only on the very brink of death that Anastasia earned the right to form a contract with him.