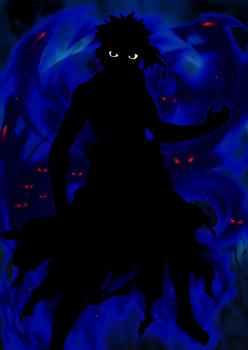 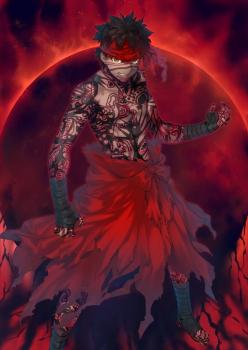 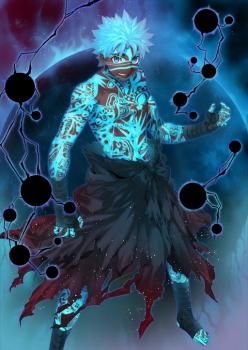 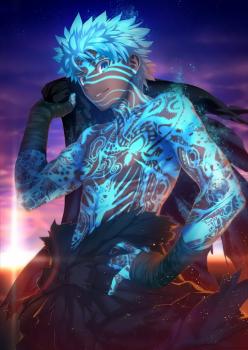 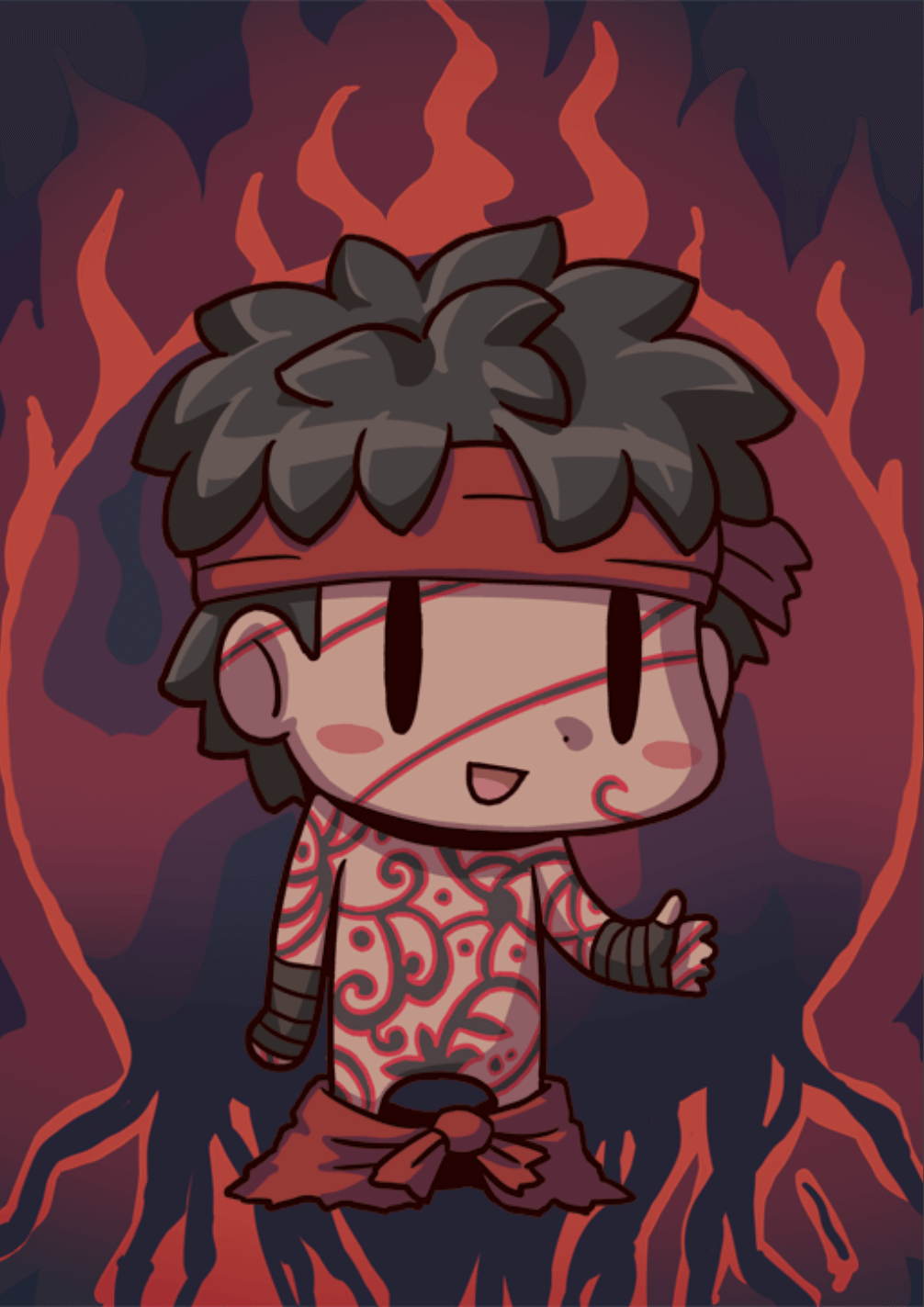 Self Guts Self Death [Demerit]

Increase own Quick Card effectiveness every turn (5 turns).
(See the turn number for exact multiplier for each turn)
After 5 turns, Sacrifice self. [Demerit]
(Sacrifice can be prevented by Buff Removal from enemies)
(Sacrifice can trigger Guts status)

The End of the Fourth Night EX

Increase own Quick Card effectiveness every turn (5 turns).
(See the turn number for exact multiplier for each turn)
Apply Guts to self (1 time, 6 turns). (Revives with 50% HP, can stack with other Guts)
After 5 turns, Sacrifice self. [Demerit]
(Sacrifice can be prevented by Buff Removal from enemies)
(Sacrifice can trigger Guts status)

Increase NP Gauge each turn by 2% for yourself.

Apply Standby status for yourself (1 turn). [Demerit]
At the end of the enemy's turn, reflect damage received during that turn onto all enemies at multiplied strength.
Damage cannot be blocked.

When equipped on Angra Mainyu,
Grants Self 2.0x Damage Against Beast-class enemies and Guts (Revive with 20% HP, 1 time).

Angra Mainyu, the embodiment of All of the World’s Evil from the Zoroastrian mythology, as per his other Fate series appearances… is surprisingly a weak guy. While Angra is one of the more rare Servant classes as an Avenger, his kit is also very gimmicky and unreliable. While he is technically a 0-Star Servant, his stats are similar to a 2-Star Servant. One notable aspect he has is his Bond 10 CE which when equipped increases damage dealt to Beast enemies.

He has two main gimmicks to his kit. The first gimmick is his Noble Phantasm which deals unblockable, defense and damage reduction-bypassing damage based on how much less HP he has when he first activates his NP. The downside to his NP is that if he dies (easily given his low HP), or if no one attacks him, his NP essentially becomes useless. His second gimmick is his third skill which increases his Quick card performance for five turns at the cost of him dying after the fifth turn, but his overall low damage makes him unable to fully take advantage of this skill.

Overall, Angra isn’t a Servant that can be reliably used due to his kit, and should be shelved as possibly a backup Servant for quests with a Ruler against them. While it is possible to make a team revolving around Angra with lots of heals, taunts, and guts, it isn’t recommended.

Apart from being effective against Rulers, Angra’s Avenger class typing also offers some good passive skills to help Angra build his NP faster via being damaged, as well as some critical damage to aid with his third skill, Annihilation Wish’s gimmicky effects. Additionally, Angra's bond CE allows him to also deal bonus damage to Beast enemies.

While extremely difficult to pull actually use effectively (as will be explained below), Angra's NP damage ignores defense, damage reductions, and invulnerability. As such he can be used in upcoming gimmicky boss battles (Siegfried from Nero Fest, hermit crabs from Summer Challenge Quest).

Only Accessible Avenger for a While

Angra Mainyu’s Noble Phantasm needs many factors to line up for it to work. First, he has to charge it as fast as he can while preferably not being dealt any damage, as his HP serves as a cap to the damage he can deal. Next, once he uses his NP, he has to be the one targeted for damage. During the turn he’s waiting for the damage, he can’t act. Additionally, given his low HP, he can’t even tank that much damage in the first place.

Although on paper, having a skill which increases Quick performance for five turns (in exchange for dying afterwards) sounds amazing, the fact that the skill was given to a Servant who has poor attack, average star generation, low star weight, and only two Quick cards makes its demerit outweigh its advantage. Note that in the future, Angra receives an Bond 10 Interlude which upgrades this skill to also include a stackable Guts effect, which greatly improves his overall viability.

Low Damage Outside of Gimmicks

Partly because he only has stats equal to a 2-Star Servant, outside of his NP and third skill Quick card boosts, he can’t deal much damage. While he does have increased critical damage to pair with his Quick card performance boost, he also doesn’t have the high star generation nor star weight to take advantage of the crit stars.

Annihilation Wish is a gimmicky skill but it’s nevertheless Angra’s best skill and should be levelled up first. The Quick performance boost per turn (400% at turn 5 at max level) can help build up damage if Angra gets to hit with his Quick cards. In the future, this skill will be upgraded in an Interlude which gives this skill a stackable Guts effect.

Tawrich’s ability to lower enemy’s NP gauge can be useful in stalling enemy NPs. The attack down can also be used to prevent damage. Combined, the skill provides some utility and allows for Angra to survive a little longer with his low HP. Though not the best defensive skill, it should be considered second to level up.

While Zarich can lower critical chance, situations where it can be applied are far and few in between. Generally speaking, it can be ignored.

Star of Altria/ Nightless Rose/ Necromancy One possible way to use both Angra’s [Skill 3] and NP gimmick is to equip him with a Guts CE while activating his NP on the 4th turn after activating [Skill 3] (preferably after being healed to max HP). During the next turn, Angra will die but will get revived due to the CE, dealing damage via his NP.

Little Halloween Devil / Divine Banquet / Prisma Cosmos The faster Angra charges his NP, the faster he can use it without having to take damage, allowing for a possibly higher HP pool to deal damage with.

Volumen Hydrargyrum One way for him not to take any initial damage is to use a CE which blocks the first three instances of damage while he charges his NP.