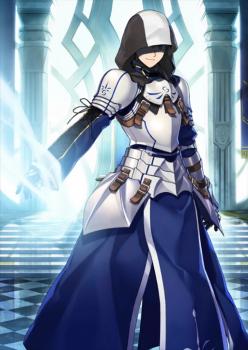 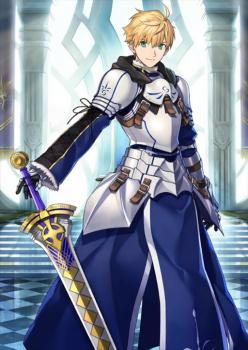 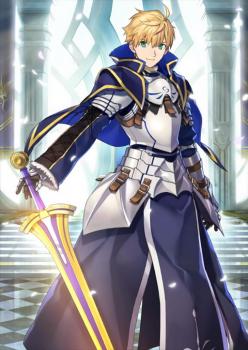 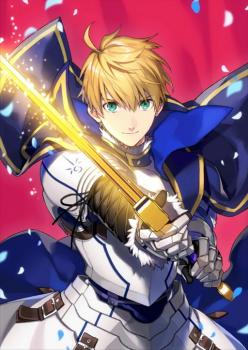 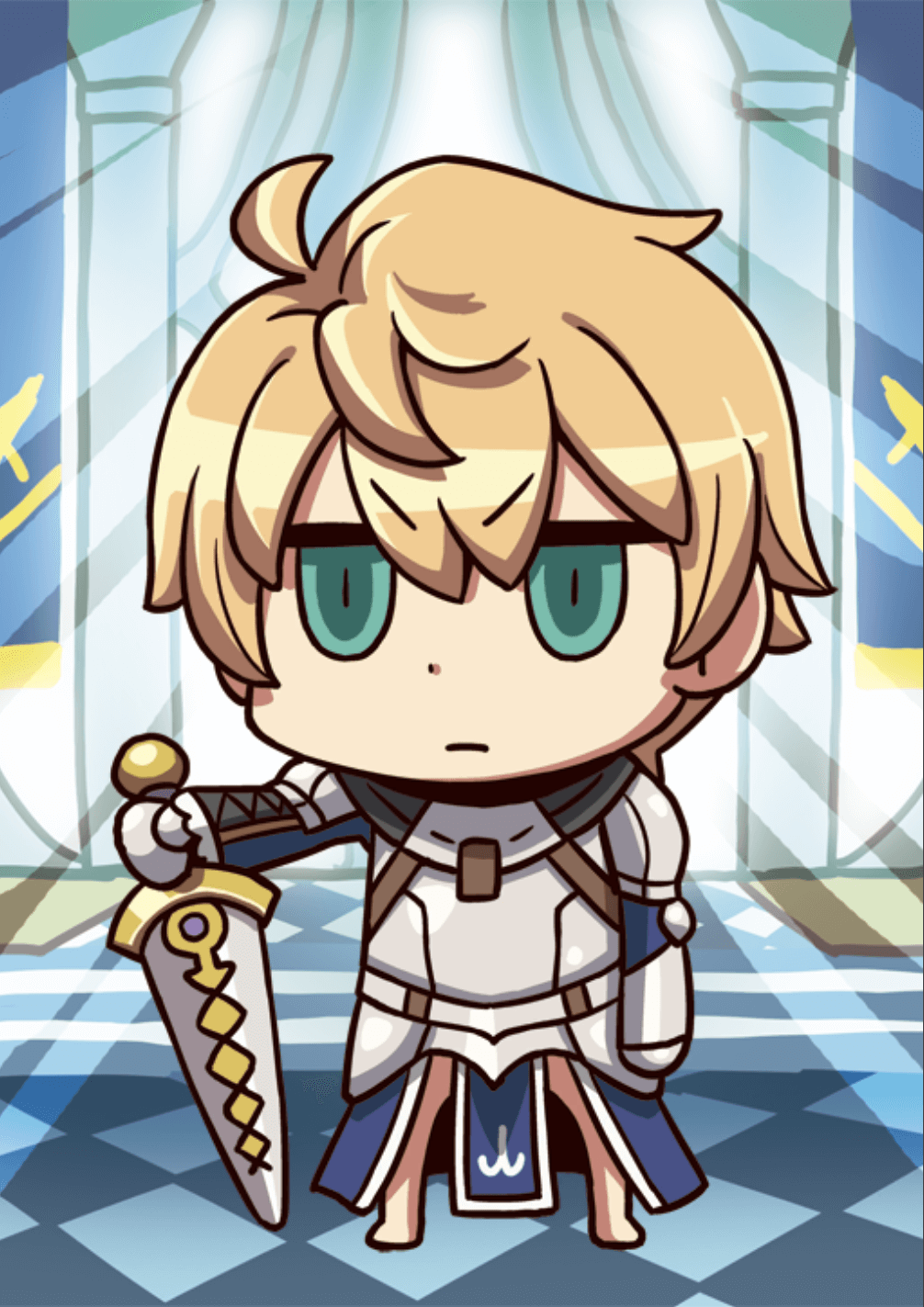 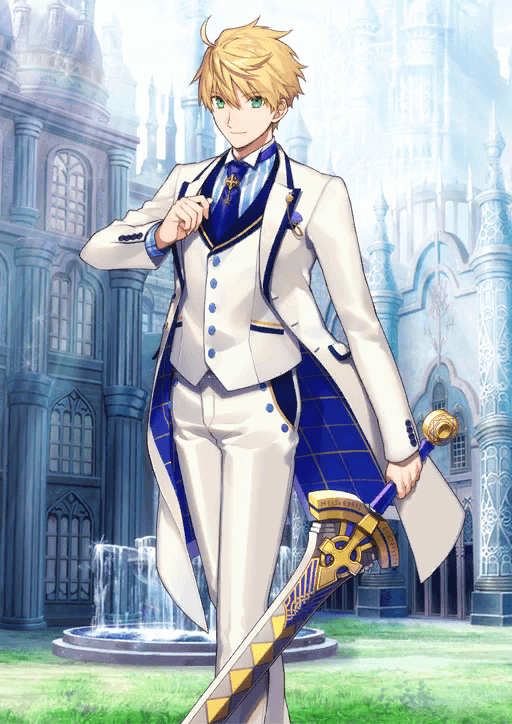 When equipped on Arthur Pendragon (Prototype),
Increase ATK by 15% for all allies while he is on the field.

‘This battle is for the sake of saving the world!’

Arthur Pendragon (Prototype), the Once and Future King, charges into battle as the ideal of knighthood and the wielder of Proto Excalibur. Notable for his fantastic base stats, Proto Arthur is a Buster Saber with an anti-Giant niche who excels at farming thanks to his good wave clearing ability and, post-Interlude, powerful burst damage.

Arthur, like his Fate/Stay Night counterpart, packs Mana Burst to provide a hefty Buster buff for his NP turns. Along with his sky-high base ATK, one of the highest of any Servant in the game, and a scaling NP Damage Overcharge, Arthur's Excalibur packs a significant punch. In addition, Giant Beast Hunt grants Arthur a very conditional, but very powerful, one-turn damage boost against Giant targets. Furthermore, it provides a handy 20% NP gauge, allowing for faster (even turn 1 with outside help) NP charging. However, it's not until his Skill Upgrade that Arthur can unleash his full offensive potential. Turning his underpowered Intuition into a massive combination of instant Critical Stars as well as a 3-turn Critical Damage steroid, Arthur's burst damage becomes very fearsome.

Unfortunately, like Proto Excalibur in lore, Arthur is bound by several restrictions that lower his overall performance. First and foremost, he finds his ideal use case somewhat muddled; Giant Beast Hunt only applies to uncommon Giant targets, who rarely appear in groups, yet Excalibur is less useful against single targets due its nature as an AoE NP. Without any Giant opponents, Excalibur's lack of an NP Upgrade will make it do consistently lower damage than his main Buster AoE Saber rivals. Furthermore, before his Interlude, Arthur’s damage is hamstrung by the short nature of his steroids; while he has multiple steroids, none last for more than one turn. Last, but not least, he lacks any form of survivability aside from his good base HP, and will need defensive support for tougher fights.

All in all, Arthur is primarily a farming Servant until his Interlude, with occasional niche fights in which he can really flex his muscle. Once he receives his upgraded Intuition, his burst potential is immense while his overall damage performance is no slouch either, giving him a much more distinct and viable play style among the crowded Buster AoE beam-firing competition.

Between Mana Burst, his high base ATK, Intuition, and the built-in NP Damage buff on Excalibur, Proto Arthur has very good (AoE) burst damage potential. Masters can unleash a devastating single turn of powerful damage in order to clear a wave of enemies. Post-Interlude, his Intuition floods the field with enough critical stars to basically guarantee a turn of critical hits all the while granting a large bonus to Critical Damage.

Thanks to the 20% NP charge on Large Beast Hunting, Arthur can easily charge up Excalibur. With the aid of a Starting NP Gauge Craft Essence or teammates, he can NP quickly to speed up farming significantly. In addition, his Quick and Extra cards possess noticeably strong generation potential, and his overall NP generation exceeds that of his Buster AoE Saber peers.

Arthur packs a huge damage bonus against Giant enemies on a low cooldown, albeit for a short duration. Against many bosses of unusual size, he can really bring the pain - and in some Challenge Quests that feature multiple Giant enemies, he truly shines especially once his upgraded Intuition rounds out his single-target damage as well.

Despite the presence of his high base ATK, and multiple steroids, Arthur's NP damage against non-Giant enemies is relatively low compared to most of his main Saber competition. His lack of an NP Upgrade is what hurts his performance most especially after his main farming perk, the NP charge, also becomes less unique.

Before his Interlude, Arthur doesn’t have a single steroid that lasts for more than one turn. Though his burst is high, his damage falls off dramatically outside of NP turns. Fortunately, after his Skill Upgrade Arthur can dish out significantly more Critical damage over time given the low cooldown on Intuition. Still, Masters willl need to supply him with additional Critical Stars given he cannot make any of his own for the second and third turn of his Critical Damage buff.

No Support, Defenses or Utility

Compared to many other AoE Saber options, Arthur offers very little to a team beyond hitting things. With every ability devoted to either direct damage buffs or indirect damage, he will need his teammates to cover all other aspects of the battle. Combined with his lack of survival abilities, finishing tougher fights with Arthur requires selecting the appropriate supports to back him up.

Conflict of NP and Niche

Though Arthur’s NP is AoE, his largest steroid, Giant Beast Hunt, only boosts his damage against Giant enemies - targets that tend to be found one at a time (barring a few exceptions) and in general don’t often appear as Lancers. Arthur will thus rarely be able to reach his (very high) damage ceiling due to this mismatch.

Arthur’s gameplay usually revolves around Excalibur, so naturally Mana Burst stands out as a leveling priority in order to strengthen it as much as possible. Giant Beast Hunt helps amplify its damage against Giant targets, and also helps Arthur charge Excalibur more quickly. The NP charge itself is is unaffected by levels, but the shortened cooldown is highly beneficial for longer fights. Pre-Interlude Intuition can be left for last, as its values aren’t spectacular even if it does improve his burst damage potential. Post Interlude, Masters should aim to max it second given how it both incredibly well and benefits immensely from a low cooldown.

Arthur mainly wants to launch his Buster NP, the earlier the better, and pump up its damage.  This makes Starting NP Gauge and NP Damage Up Craft Essences good fits for him.  Starting NP Gauge can help release Excalibur as early as turn 1, and in general helps him clear waves and farm quickly. NP Damage Up is a straightforward boost to his NP burst turns, while Buster Up Craft Essences are comparatively only a slight buff to his NP damage but a bigger buff to his basic command cards.